Thousand of British expats have left Spain amid fears over Brexit and the pound’s slump against the euro, it has emerged.

About 5,000 Britons are believed to have been living in the resort of Benidorm before the 2007 financial crash – but by last year that number had fallen to 2,825.

Over the same period, almost 5,000 moved away from the Balearic islands – Ibiza, Majorca and Menorca.

Expats are leaving Spain in their thousands over Brexit fears and with the pound plummeting against the euro. About 5,000 Britons are believed to have been living in the resort of Benidorm before the 2007 financial crash – but ten years later that number had fallen to 2,825

Some fear Brexit will will have a negative impact on their lives abroad while others say life on the continent has become too expensive.

Yesterday, Sterling fell to its lowest against the euro in nearly a year. It came after British Prime Minister Theresa May played down the consequences of Britain leaving the EU next year without securing a deal with the bloc.

Failing to reach an agreement on trade relations with the EU ‘wouldn’t be the end of the world,’ May told reporters as she headed to Africa to try to boost Britain’s trade ties ahead of Brexit in March 2019.

May’s comments – seen as undermining Finance Minister Philip Hammond’s warnings about the economic damage from a ‘no-deal’ Brexit – piled pressure on the pound.

The prospect of a no-deal Brexit is becoming increasingly feasible in the eyes of investors who are hedging against the risk of the currency tanking if Britain is left isolated from the EU, its largest trading partner. 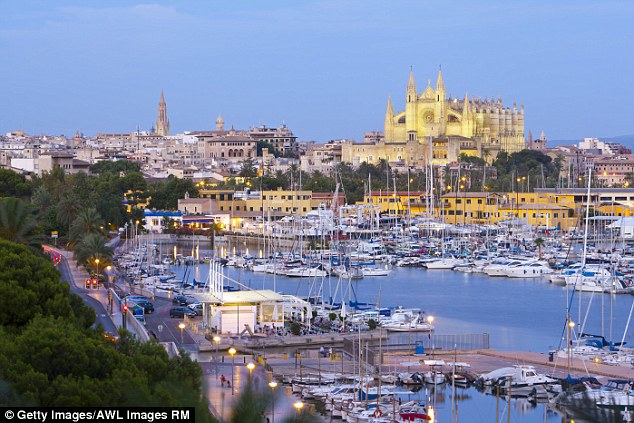 Between 2007 and 2017 almost 5,000 Britons moved away from the Balearic islands – Ibiza, Majorca (pictured) and Menorca

It said figures from Spain’s National Statistics Institute showed the number of residents from 15 EU-countries in Spain had fallen by a quarter but the number of British expats had fallen 40 per cent.

Between 2012 and 2017, the number of Britons leaving Spain outnumbered those who arrived. In the previous four years, 40,454 more Britons arrived in Spain than left.

While the drop in expats was put down partly to a shake up in municipal enrollment regulations in Spain, some people told the newspaper that Britons where struggling to cope with the devaluation of the pound.

Michelle Ball, who has a shop in La Xara, Alicante having arriving in Valencia as a 14-year-old, said: ‘Many are returning because life has become incredibly expensive.

‘My mother has lost €160 a month in her pension since the Brexit referendum because of the devaluation of the pound. Now her pension is €690. And since the Spanish government made changes a few years back she also has to pay a portion for her medicines. It’s not a lot but it doesn’t help either.’