A British mum who took 14 hours to pick up her three-year-old son from police after he went missing has had the child taken away from her.

The expat mum was warned she faced prosecution after the youngster was found wandering barefoot in pyjamas along the seafront in the Costa Blanca holiday resort of Torrevieja.

She discovered officers had taken her child to hospital for a check-up an hour after she lost sight of him – but then took another 11 hours to call police and a further two hours to go and fetch him.

When asked why she had failed to call police immediately, she told officers that ‘she was tired’, local media reports.

On Tuesday court officials confirmed she was being investigated on suspicion of a crime of child abandonment following the bizarre incident last week – and said the youngster had been placed in temporary care.

The investigation is being led by an investigating judge at Court of Instruction Number Four in Torrevieja.

A court official confirmed: ‘Court of Instruction Number Four in Torrevieja has placed a British woman under official investigation on suspicion of a crime of child abandonment.

‘She was arrested last week after police found her three-year-old son alone.

‘The judge has authorised the three-year-old’s entry into a child protection centre and has provisionally removed him from his mum’s custody.

‘The child will remain in regional authority care. The court has informed local authorities including social services in Torrevieja and state prosecutors.

‘After being questioned in court by the investigating judge, the British woman has been released on bail pending an ongoing investigation.’

The extraordinary sequence of events which ended with the unnamed 34-year-old being reported for alleged child abandonment began around 8.30pm last Wednesday.

Police took him away after failing to identify him and confirming no missing alert was out for him – and took him to hospital for health checks while they tried to establish who his parents were.

The same fast food worker who had alerted local police spotted a woman ‘looking for something’ along seafront promenade Paseo Juan Aparacio around 9.30pm the same night. 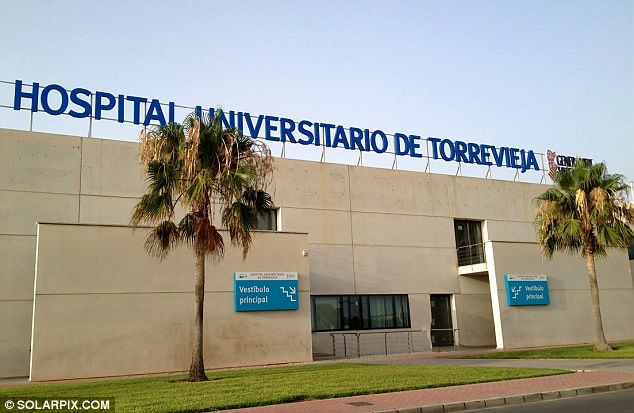 The boy was found wandering in his pyjamas and was taken to this hospital by police. The mother was informed an hour later what had happened, but took 11 hours to contact police and another two to go an pick the boy up

The worker told the woman that her child was with the authorities after confirming she was searching for her son.

Police only got their first call from her at 8.30am last Thursday and she took another two hours to turn up to collect her son after being urged to come in immediately because he was about to be placed in temporary care.

She is said to have told officers when she finally arrived that she knew her child was in safe hands after losing sight of him while she was out with a group of friends.

It was initially reported that she had escaped arrest, but court officials said she had been read her rights before being hauled to court.

The promenade where the youngster was found is in the heart of Torrevieja town, close to the spot where an off-duty police officer arrested a man suspected of trying to abduct a two-year-old girl last September.

Local reports at the time said the Spaniard, described as well-built and around 60, ran off with the girl in his arms before dumping her as he was intercepted by holidaymakers alerted by the youngster’s screaming relatives.

He was pinned to the ground by the off-duty police officer – and handed over to Civil Guard officers for questioning.

In July 2016 police in Benidorm further up the coast arrested a British holidaymaker accused of abandoning her two nine-year-old twins while out drinking.

One of the boys was taken into a police station by a couple who found him walking alone on the streets of the Costa Blanca resort looking for his AWOL mum.

His twin brother was discovered lying in the door-well of his holiday apartment after crossing town to return to where they were staying.

Police arrested their mum after failing to find any search of her in the area where her children had last seen her – and tracking her down the following morning asleep in bed at her holiday accommodation.