This is the moment a British tourist arrives back at the village she had been staying at after vanishing in the Brazilian rainforest for five days.

Katherine Brewster, 27 from Seaford, East Sussex, disappeared after going to the Brazilian rainforest without telling anyone where she was.

She intended to spend three weeks meditating alone to get closer to nature.

The video shows the moment Ms Brewster returns after being rescued and greets Neli da Terra, the woman she has been staying with in the village of Dom Jose, a tiny community in the south Brazilian state of Rio Grande do Sul.

The two men who get out of the car with her are Clairton da Silva and Edson Medeiros who found her following a five hour search.

The traveler lived on yams, oranges and limes after getting lost in the dense region and she hadn’t realised she had sparked a desperate police manhunt.

Civil police chief, Lourenço Guerra, said: ‘Katherine is very sorry to have caused so many problems. She wrongly believed people wouldn’t be too worried about her disappearance.

‘Her plan was to spend three weeks getting in touch with nature. The problem was she didn’t warn anyone, not even her friends and family.

‘Katherine told us she decided to test her ability to survive in the wild after receiving a ‘divine sign’. She said she planned to live ‘light’ and tried to go without eating and drinking for a few days but couldn’t keep it up.’

Chief Guerra also said Ms Brewster lived off roots and fruits, while quenching her thirst from a waterfall which runs adjacent to the Uruguay River near the Foz Chapeco dam.

She hadn’t made a fire or cooked any food because she is a vegetarian.

Ms Brewster has been in Brazil for two years. Before arriving in Alpestre city, she lived in Florianópolis, in alternative communities. 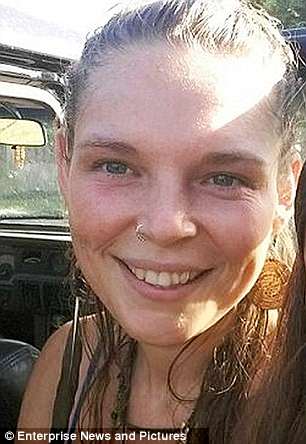 Katherine Brewster, 27, had been staying in the village of Dom Jose

She had been staying for over a month with a local couple in Dom Jose village, a rural community on the outskirts of the town when she disappeared last Sunday.

Her host, Ms da Terra, reported her missing to police on Tuesday after she failed to return.

She told police her guest had left early in the morning to meditate in the forest, something which the Brit normally did.

She was barefoot and dressed lightly in a tee-shirt and shorts.

In a Facebook post, Ms da Terra said: ‘Katherine was a guest for a period of 32 days, in search of a contact with earth and nature, always with a quiet behaviour and relationship and without causing any damage to the community and our family’.

Ms Brewster was found on Friday at around 11am, sheltering near a waterfall by two local men after a five-hour hunt.

Medical tests showed that she was dehydrated, lean, suffering from exhaustion and hungry.

She had superficial injuries to her feet, which were bleeding and bruised and several scratches to her body.

She had built an improvised shelter out of branches and banana leaves where she had taken cover during rainy weather.

Mr da Silva, 33, who is the coordinator of UniPermacultura, a self-sufficient ecological community near where Ms Brewster was staying, said: ‘We suddenly spotted her and (we were) thankful she was alive. She started crying, thanking us and was apologetic, saying that she had got lost and couldn’t find her way back home. 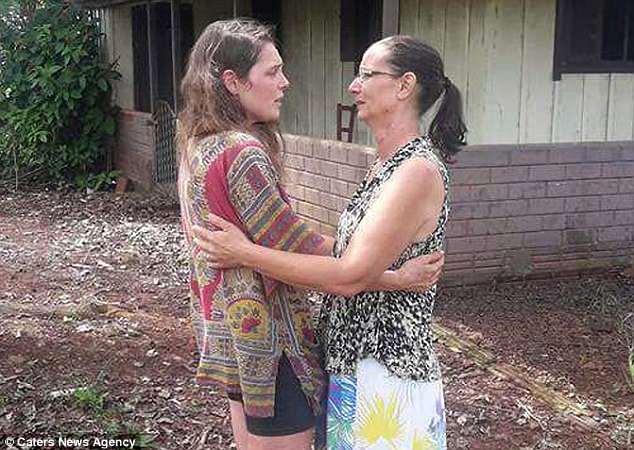 Ms Brewster pictured with the woman she has been staying with, Neli da Terra, after her rescue from the Brazilian rainforest

‘The first thing we said to her was “How are you, are you fine? Let’s take you home”.

‘If she had stayed much longer on her own she could have died because the terrain is inhospitable and dangerous,’ he added.

Ms Brewster was too weak to walk back to the village. Her feet were badly damaged and bleeding as she had trekked for miles over rugged terrain without shoes. 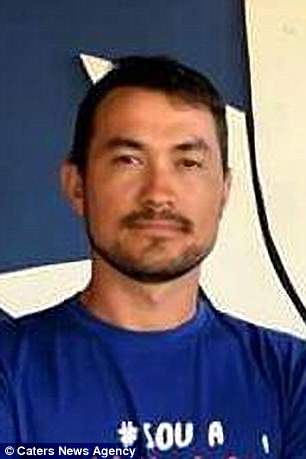 Clairton da Silva, who helped to rescue Miss Brewster, said the British tourist was ‘crying and thanking us and saying that she had got lost and couldn’t find her way back home’

The men took it in turns, during a 3km journey, to carry the exhausted woman on their backs before they were collected by car and driven back to the village.

Mr da Silva said that the area where the Brit was found was difficult to access. He said he drew on his skills as an ex-army officer to track her whereabouts. His colleague Mr Medeiros was born in the area and knows the region extremely well.

‘We tracked (Katherine’s) movements by following discarded fruit seeds, fruit skins and peels. We knew that this was the result of a human being trying to eat and keep themselves alive,’ said Mr da Silva.

Venturing deep inside the forest is considered ill-advised even for locals as the place is teaming with venomous spiders, deadly insects and some of the world’s most dangerous snakes.

Ms Brewster took a shower as soon as she got home and spoke to her family to reassure them she was safe before going to the police station and hospital.

Her mother, Dr Diane Brewster, told the BBC her daughter had called home after returning from ‘time alone’ in a rural part of Rio Grande do Sul.

Ms Brewster was said to have been ‘amazed’ upon learning of the search for her.

Chief Guerra revealed the tourist hadn’t taken her personal documents but had hidden her passport and credit card on the premises where she was staying before leaving to meditate.

He added investigators are trying to establish how the Brit arrived in the country because there is no record of her arriving at an airport. 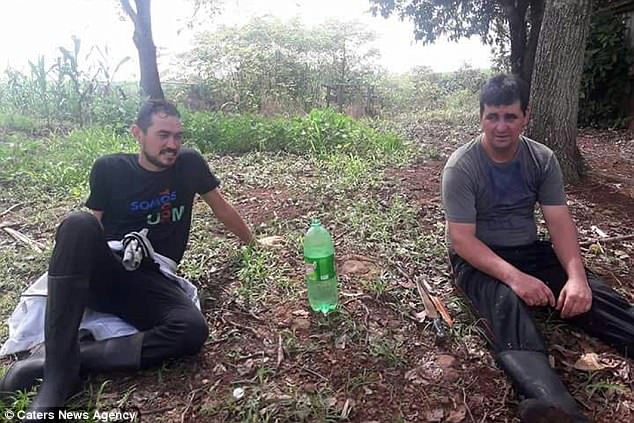 Chief Guerra said: ‘It appears Ms Brewster could be here illegally. We have discovered she didn’t enter Brazil via an international or domestic airport and may have arrived overland.

He confirmed this is a matter which is now being dealt with by federal police.

The experienced traveller has a ‘philosophy of living in contact with nature’.

The forest where she vanished is perilous as it is a natural habitat for cobras, dangerous insects and large deadly spiders. 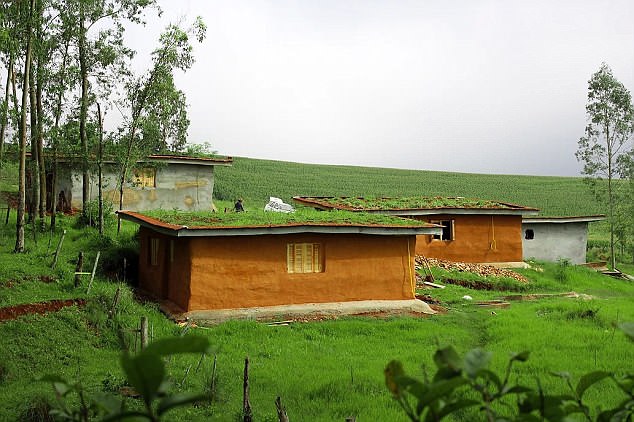 Initial reports said Ms Brewster had been living in a nearby hippy commune run by an environmental organisation called UniPermacultura, but Mr da Silva later denied she had been ‘a student, or a guest, or a resident’ there.

Mr da Silva revealed the precise circumstances of Miss Brewster’s unusual arrival in the area. He told the Mail she had arrived in the Dom Jose village without warning and was ‘extremely reserved’.

Mr da Silva said she would spend the whole day on her own in a wooded area just behind the house, reading and meditating and being with nature. 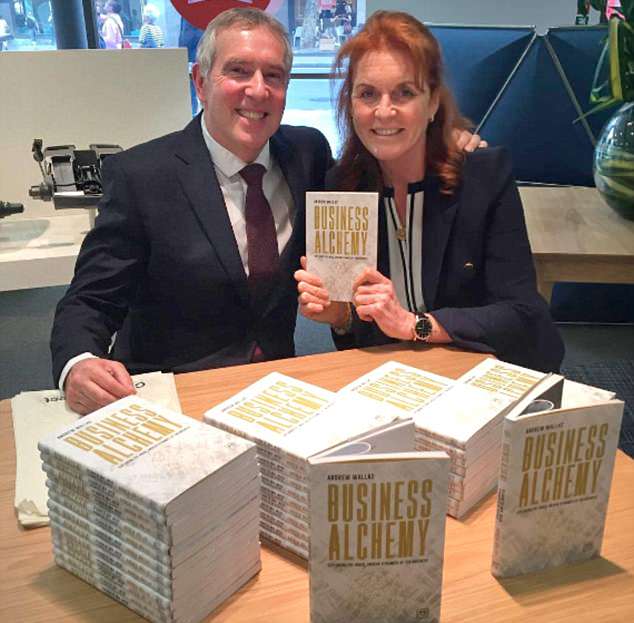 Well-connected father: Mr Wallas’s book has been praised by the Duchess of York (both pictured)

‘On Sunday they woke up and she wasn’t in her room, so they imagined she had gone off to meditate. When she hadn’t come back at the end of the afternoon, they saw that she’d taken her passport and credit card and thought that she might have gone away,’ he said.

‘We don’t believe she got lost in the woods because they are very small, or that she fell into the river because there were lots of people around that area who might have seen her.’

The Brazilian homeowner she had been staying with, Neli da Terra, said Miss Brewster had been renting a space in her home for 32 days, but had vanished on Sunday morning without ‘leaving any note or information about her fate’. 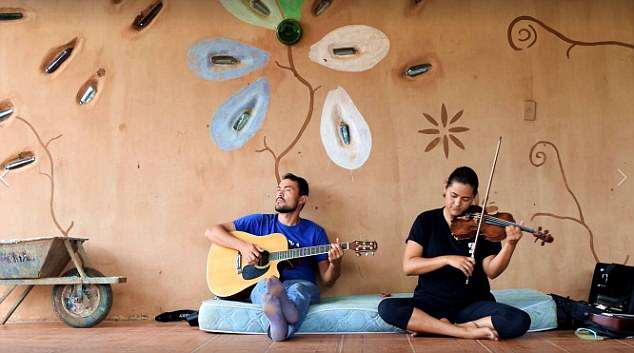 Her father, Andrew Wallas, 62, is a well-known counsellor and relationship adviser who calls himself ‘The Modern Day Wizard’ and counts Sarah Ferguson and Davina McCall as fans.

The Duchess of York was recently pictured with Mr Wallas alongside his latest book, Business Alchemy, which she described as ‘great’.

Miss Brewster’s mother, Dr Diane Brewster, 62, is an academic specialising in pedagogy who lives in the coastal town of Seaford, East Sussex.

Known to family and friends as Kat, Miss Brewster had also visited Bolivia, Morocco and India but had said she was planning to come back to the UK next year. 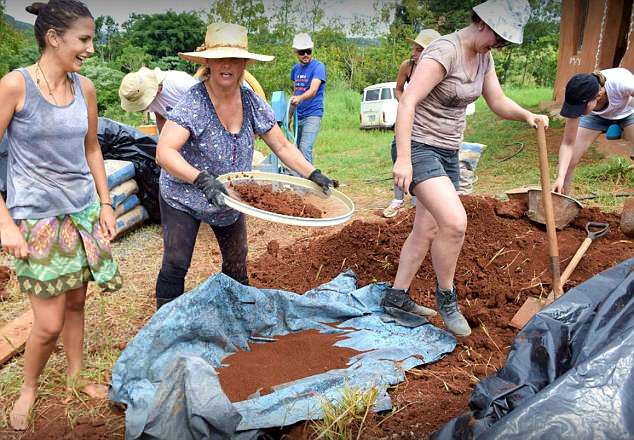 Community dig: Gardeners practise sustainable farming at the ecovillage where the 27-year-old was staying 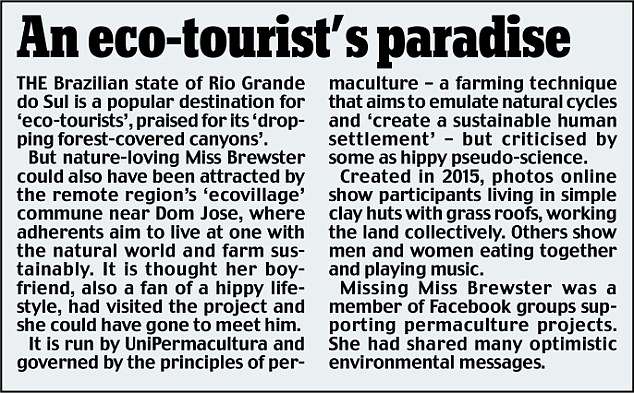