Britain and Ireland are engaged in secret backstop talks, Dublin has confirmed, as EU leaders told Boris Johnson he had until the end of September to present them with his new Brexit plan.

Simon Coveney, the Irish foreign affairs minister, said he is meeting regularly with numerous members of Mr Johnson’s Cabinet in a bid to thrash out a way to avoid a damaging No Deal split on October 31.

He said: ‘Of course there are conversations, as you would expect, exploring concepts, what might work, what won’t work.’

His comments, first reported by The Times, suggest that efforts to break the Brexit impasse are now stepping up a gear as the Halloween departure date draws ever closer.

But in a sign of growing impatience in Brussels Mr Johnson has now been told he must put forward a written offer of how the UK intends to replace the Irish border insurance policy within the next 11 days.

The ultimatum was reportedly delivered by Finnish PM Antti Rinne in Paris yesterday after a meeting with French President Emmanuel Macron.

However it is unclear if the deadline will be backed by other European leaders who will be fearful of pushing the two sides towards a chaotic split in 42 days time.

Mr Macron has long been concerned about the time Brexit is taking and has previously spoken against granting the UK any more extensions to Article 50.

Mr Rinne, whose country holds the EU council presidency, is reported to have said after the Paris meeting: ‘We are both concerned about what is happening in Britain right now and the confusion that is going on from there to Europe.’

Mr Rinne said the EU must ‘know what the UK is proposing’ and that ‘loose talk about proposals for negotiations is irresponsible’.

According to The Guardian, he added: ‘We both agreed that it is now time for Boris Johnson to produce his own proposals in writing – if they exist. If no proposals are received by the end of September, then it’s over.’

Boris Johnson, pictured in 10 Downing Street alongside his girlfriend Carrie Symonds yesterday, has been told by EU leaders to set out his backstop plans by the end of September 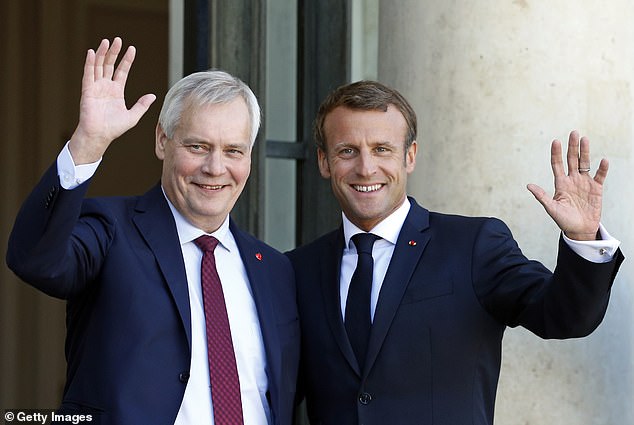 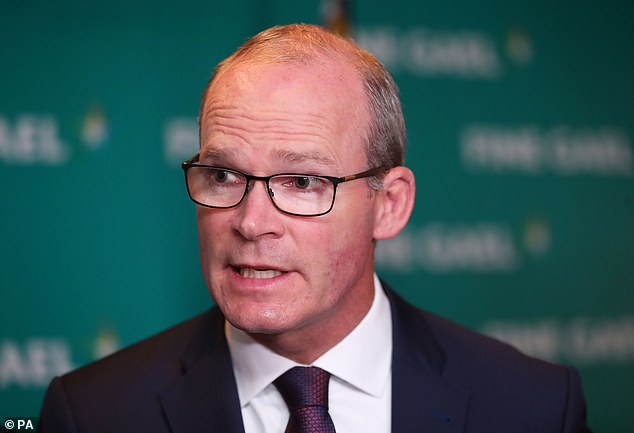 Simon Coveney, pictured in Cork on September 12, has revealed he is holding regular meetings with UK Cabinet ministers to discuss backstop alternatives

The deadline is likely to create uproar in Westminster because Parliament is currently shut down and it falls in the middle of the Conservative Party Conference in Manchester, providing an additional headache for Mr Johnson.

Mr Coveney’s comments about the increasing levels of shuttle diplomacy between Dublin and London do appear to offer a glimmer of hope that No Deal could be avoided.

However, Mr Coveney echoed the concerns expressed by Mr Rinne as he said the UK needed to come forward with a formal offer for how to replace the backstop.

‘We simply haven’t seen any written proposals to date,’ he said.

It is thought that the UK has shared details of how the backstop could be replaced so that it can be deleted from the current divorce deal.

But Britain is understood to be reluctant to hand over anything in writing because it is likely to be shared with the EU 27 member states and there is a fear it could then be leaked.

Today: Supreme Court continues to hear case on whether prorogation of Parliament was illegal.

It came after Jean-Claude Juncker had yesterday trolled Mr Johnson over the bitter row over suspending the Commons – saying the European Parliament is ‘open and in action’.

The EU commission chief delivered the jibe as he gave a speech to MEPs in Strasbourg updating them on the Brexit process.

Mr Juncker said his lunch with Boris Johnson in Luxembourg this week had been ‘friendly’, but he warned he could not ‘look you in the eye and tell you progress has been achieved’.

Again warning against the harmful consequences of a no-deal Brexit, EU’s chief negotiator Michel Barnier said during the debate he wants to keep working ‘night and day’ in order to find a satisfying deal for both parties and urged Johnson and his team to make concrete proposals.

Mr Juncker told MEPs: ‘I said to Prime Minister Johnson that I have no emotional attachment to the safety net, to the backstop, but I stated that I stand by the objectives that it is designed to achieve.

‘That is why I called on the Prime Minister to come forward with operational proposals, in writing, for practical steps which would allow us to achieve those objectives.

‘Until such time as those proposals have been presented I will not be able to tell you, looking you straight in the eye, that any real progress has been achieved.’

He added: ‘Over the past years, the EU has shown great unity of purpose in the Brexit negotiations. Great solidarity with those Member States most affected.

‘Unity is our most precious resource and our greatest asset. It will continue to guide me over the next weeks.’

Mr Juncker said there was ‘very little time remaining’ to find a way through the impasse.

Last night Downing Street revealed Mr Juncker spoke to the Prime Minister after the address, where they ‘discussed the positive and constructive conversation they had in Luxembourg on Monday and their shared determination to reach a deal’. 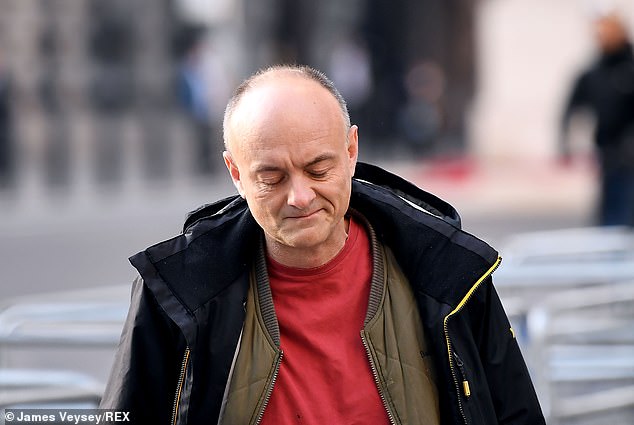 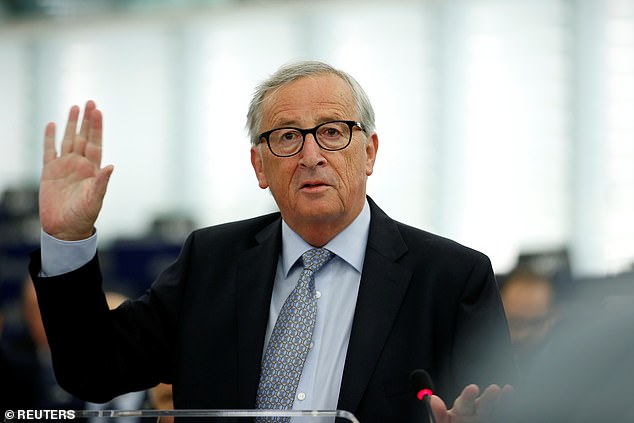 Mr Juncker (pictured yesterday in Brussels) said his lunch with Boris Johnson in Luxembourg this week had been ‘friendly’, but he warned he could not ‘look you in the eye and tell you progress has been achieved’. 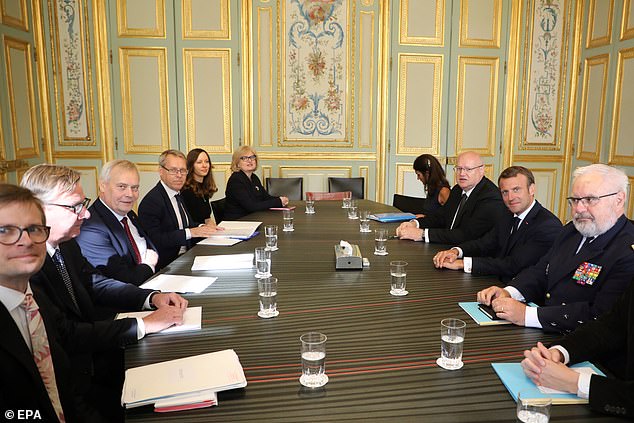 The deadline is said to have been pushed by Mr Macron, who has long complained about the time it has taken to get the UK out of the EU

The US has joined condemnation of Boris Johnson’s outrageous treatment by the Luxembourg PM – saying it shows why the UK wants to leave the EU.

US ambassador Woody Johnson said Xavier Bettel clearly wanted to ‘trap’ the premier during his visit to the country this week.

He said Britain was a powerful nation and confirmed that the United States would always support and defend the United Kingdom.

‘We stand with the people of the UK and we always will,’ he said.

‘The people who built the greatest empire, the people who held off the Nazis, who contributed so much to the progress of mankind you can go down a long list – they don’t need a lecture from anybody on how to run their country, and that includes Brussels.’

The intervention, in a speech at the Carlton Club, comes amid mounting criticism of the behaviour of Mr Bettel.

EU diplomats have voiced alarm that the stunt has backfired by fueling Eurosceptic sentiment in the UK and derailing delicate negotiations.

One complained that the leader of a ‘bigger country’ would not have indulged in such grandstanding.

On Monday, Mr Bettel – whose country has a population of just 600,000 and an economy half the size of the NHS budget – refused to move a joint press conference with Mr Johnson indoors to prevent the British PM being ‘drowned out’ a small but noisy protest.

Instead he continued with the media call solo, delivering a furious anti-Brexit rant against the backdrop of a Union flag, while gesturing at the empty podium set up for Mr Johnson.