Military and intelligence chiefs from Britain and the US have vowed to work together to take on the cyber threat posed by enemies like Putin’s Russia.

Top brass from the two countries held talks about how they can ‘counter and defend ourselves’ from the new threat of cyber warfare.

And the leaders from GCHQ, the UK’s joint forces command (JFC) and the US National Security Agency (NSA) released an unprecedented statement of intent.

It comes amid warnings that Vladimir Putin is ordering Russian hackers to target UK and US infrastructure to spark chaos.

Relations between the Kremlin and Westminster have plunged to a fresh low in the wake of the Salisbury poison attack.

The joint statement comes after talks in the US involving GCHQ director Jeremy Fleming, JFC commander General Sir Christopher Deverell, and US Admiral Mike Rogers, commander of US Cyber Command and director of the NSA.

They said: ‘Our organisations work extremely closely together to help keep the United States and United Kingdom safe.

‘Our discussions focused on how best we deploy and develop our cyber capabilities to counter, and defend ourselves against, malign activity around the world.

‘This co-operation has been part of our shared history for over 75 years, and will continue to be vital in protecting our countries.

‘Every day our brilliant people share information and ideas as they counter shared threats in an increasingly digital world. We thank them for everything that they do.’

Last week the authorities in the US and UK announced that an Iranian-based group of hackers had targeted universities and other institutions in an attempt to steal secrets.

Washington said the Mabna Institute had links to the Tehran government.

Officials on both sides of the Atlantic are also concerned about Russian cyber attacks while North Korea has been blamed for the WannaCry attack which hit NHS hospitals.

An intelligence source said the talks in the US covered the ‘full range of topics’ including ‘the work that we do together on hostile state activity’.

As well as advanced counter-cyber capabilities, the UK has declared it has the ability to launch its own strikes.

Earlier this month a potential cyber strike was one of the options reported to have been under consideration in response to the Salisbury nerve agent attack.

Former GCHQ boss Robert Hannigan said the UK had ‘advanced abilities in offensive cyber’ but launching an online strike was not a ‘trivial thing’.

‘It’s a bit like launching a military conflict and I don’t think anybody would benefit from that.’ 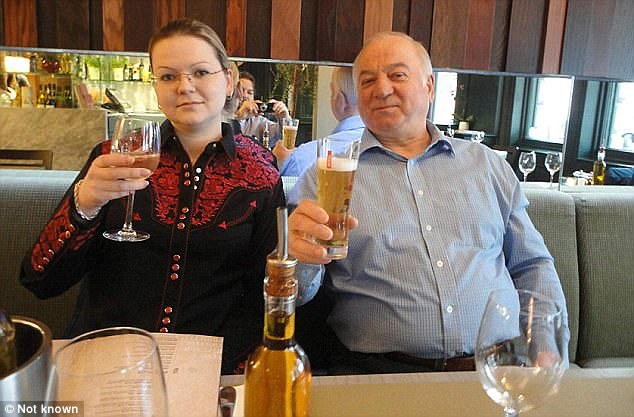 Russian former spy Sergei Skripal and his daughter Yulia are still fighting for their lives in hospital after being poisoned by the nerve agent Novichok.

Downing Street says the Kremlin in responsible for the attack by either ordering it directly or losing control of their chemical weapon stocks.

Mr Putin and his ministers have failed to given the British authorities an explanation as to hoe the poison was used on British soil in an attempted murder, Theresa May has said.

She has expelled 23 Russian spies living under diplomatic cover in the UK from the country in retaliation for the attack.