Britain has suffered a further 269 coronavirus deaths – the lowest figure in six weeks since March 29.

A total of 31,855 have now died of COVID-19 across the UK. However, there is always a dip in daily deaths at the weekend and the true toll is likely to be higher in reality due to a delay in gathering death certificates.

The glimmer of hope comes as Prime Minister Boris Johnson prepares to formally announce the next stage of the lockdown at 7pm tonight.

Limits on outdoor activities are expected to be among the first thing to relax from tomorrow – but Government ministers have insisted there will be no major changes.

Downing Street today has attempted to defend the decision to ditch the blanket ‘stay at home, protect the NHS, save lives’ slogan for an ambiguous ‘stay alert, control the virus, and save lives’ line.

The softer approach has already attracted a backlash with leaders in Scotland and Wales refusing to abandon the familiar ‘stay at home’ strategy.

It comes amid warnings from scientists that thousands more lives will be lost to the pandemic. One study estimates 100,000 Britons could be lost to the killer infection by the end of the year if the crisis is not controlled.

And a separate study estimates 700,000 people will die in Britain as a result of the COVID-19 and the lockdown measures used to control it – more than in the Second World War. 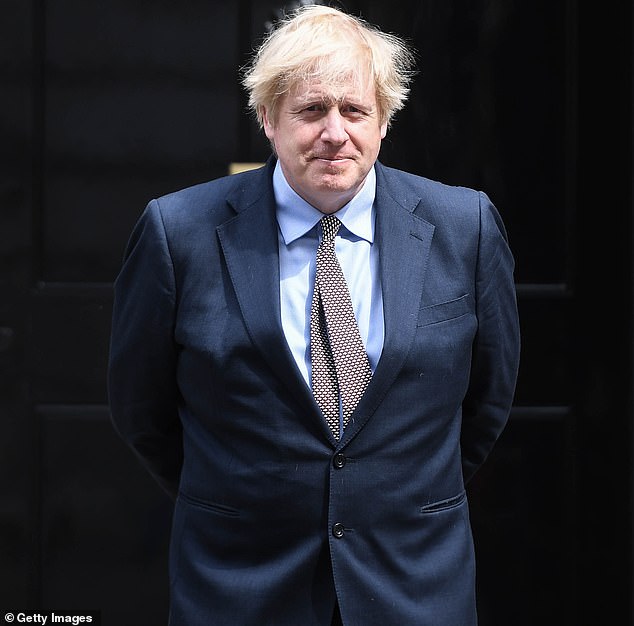 On another pivotal day in the all-consuming crisis:

UNIONS BLOCK BACK TO WORK

Britain’s biggest trade unions have today been accused of playing politics amid the coronavirus crisis, after threatening to tell millions of members not to return to work unless the government introduces policies to ensure workplaces are safe.

Leaders of unions such as Unite, Unison and the General, Municipal, Boilermakers (GMB) have written an open letter to Prime Minister Boris Johnson demanding he guarantees ‘the right policies and practices are in place to make workplaces safe’ in the midst of the coronavirus pandemic.

The letter, published in The Observer today, and which is also backed by the Union of Shop, Distributive and Allied Workers (USDAW), also urges the government to boost funding for health and safety enforcement in the workplace.

And while many private sector workers are itching to get back to work, many of their commutes depend on public sector transport workers who have not been furloughed or had their pay cut in the coronavirus crisis.

Now critics have hit out at unions over their stance in today’s open letter to Mr Johnson and warned them to steer clear of playing ‘left wing politics’.

Henry Smith, Conservative MP for Crawley in West Sussex, told MailOnline: ‘So long as safety measures are in place there can be no excuse for unions seeking to prevent a return to work when appropriate.

‘Unions have a duty to support the recovery of our nation’s economy out of the Covid-19 crisis, not play left wing politics.’

The Government revealed almost 4,000 more people were diagnosed with the killer infection in the 24 hours until 9am on Sunday, taking total reported cases to 219,183.

The true size of Britain’s actual COVID-19 outbreak remains a mystery because of ministers’ controversial decision to abandon mass testing early on in the crisis.

The number of daily coronavirus tests fell below Health Secretary Matt Hancock’s 100,000 target for the eighth day in a row on May 9.

The daily death tally of 269 is not broken down to show how many occurred in different settings, such as hospitals or care homes.

But at least 178 of today’s fatalities definitely occurred in hospitals in England because NHS England reveals new deaths recorded by trusts every afternoon.

Of those, 148 occurred in the past three days. The rest date back as late as March 17. It brings the total number to 23,149 in hospitals alone.

All of the home nations except England add fatalities in all settings, including care homes, to their overall tally, announced in the afternoon.

Scotland revealed a further 10 fatalities, and 12 more people died in Wales along with five in Northern Ireland.

Britain now has the second highest death toll in the world, after the US where 79,700 people have succumbed to the pneumonia-causing virus.

Prime Minister Boris Johnson will address the nation tonight at 7pm and is expected to unveil a new DefCon-style five stage system to describe the country’s outbreak condition.

The focus will shift to getting businesses running, with detailed guidance for firms on how they should operate, and garden centres allowed to open from Wednesday with social distancing measures.

Shoppers could be urged to wear face coverings, as has already happened in Scotland.

Breaches of the more nuanced rules could be enforced with harsher fines.

Plans are being drawn up to use ‘peer pressure’ to get people to self-isolate, as those who test positive will be told to get in touch with anyone they might have infected.

But ahead of the PM’s speech, he has already been forced to defend his ‘exit plan’ amid a furious backlash at dropping the powerful ‘stay at home, protect the NHS, save lives’ slogan. 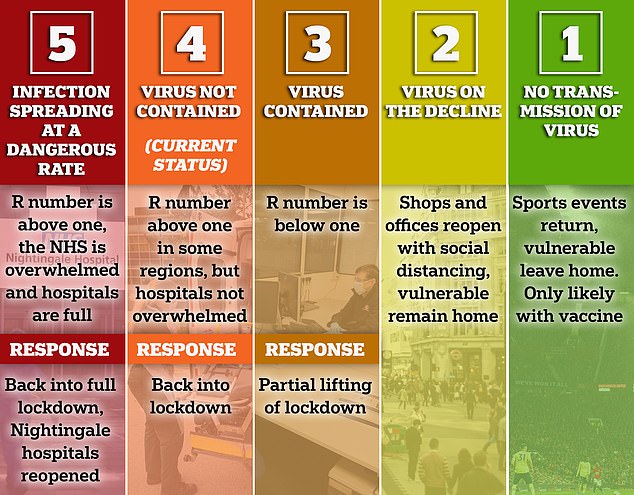 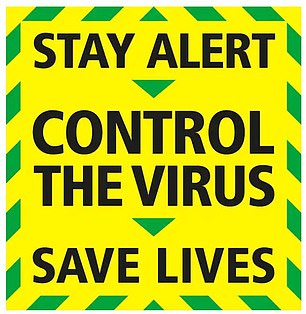 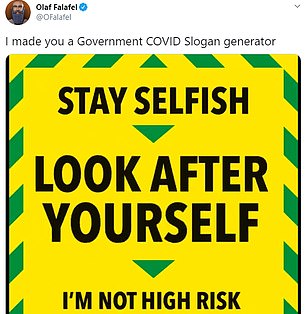 Instead, a new ‘stay alert, control the virus, and save lives’ mantra (left) will be pushed out by officials, which has attracted backlash and caused confusion and mocking (right) 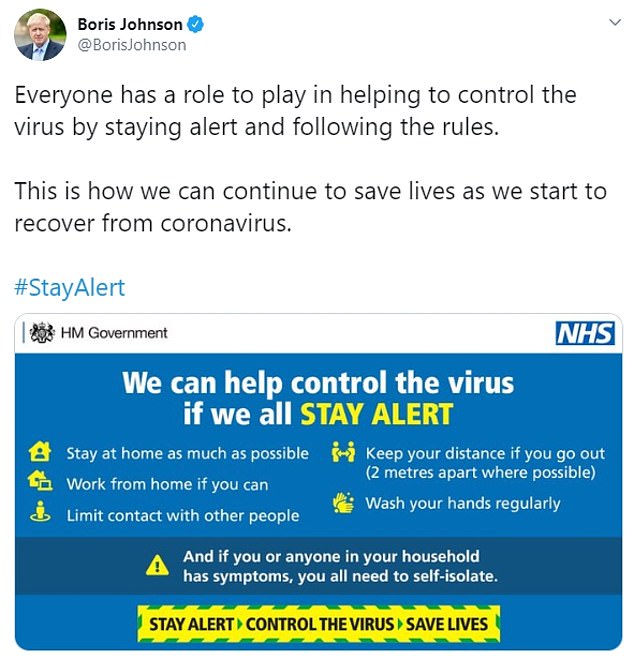 Boris Johnson is scrambling to defend the decision to ditch the blanket ‘stay at home, protect the NHS, save lives’ slogan, amid furious opposition from Nicola Sturgeon

Only 52 per cent of Britons said they would download the NHS contract tracing app, according to a poll by The Observer.

The app alerts users when they have been in close contact with someone who has reported symptoms of COVID-19.

But experts have said that around 60 per cent of the population – 40million people – will need to download ‘NHSX’ to make the software effective.

Researchers at the University of Oxford believe the app can only be effective when used by 80 per cent of the population.

With lower levels of usage, it may help to reduce the strain on the NHS by reducing cases, but it would not necessarily crush the coronavirus crisis, which has killed at least 31,600 in the UK.

The NHSX app is a key piece in the UK Government’s plan to get the country out of lockdown, integrated in their test, track and trace strategy.

But there is some reluctance to download the app because of a cloud hanging over data protection – which ministers have denied is a problem.

The app design has also been fraught with complications since trialling of it began on Isle of Wight this week, such as that older phone models are not compatible.

Instead, a new ‘stay alert, control the virus, and save lives’ mantra will be pushed out by officials, which has attracted backlash and caused confusion among the public.

Brits mocked the new guidance in a series of hilarious memes online, creating their own versions of the new slogan such as, ‘stay selfish, look after yourself, i’m not high risk’.

Leading politicians condemned getting rid of the old slogan that has brought the country to an effective standstill since March 23, forcing the PM to clarify the new advice on Twitter just hours before his 7pm speech.

Nicola Sturgeon  said she had not been informed about the change, and insisted the simple guidance would stay in force in Scotland whatever the PM says. Wales also indicated it would still tell people to stay at home.

Ms Sturgeon, who will attend a Cobra meeting later to sign off the changes, has previously warned that ditching the clear and simple advice will be ‘potentially catastrophic’.

Researchers predict social distancing measures will be needed until December 2024 in order to beat COVID-19 if a vaccine is not discovered.

If Britain is plunged into a recession as a result, more than 675,000 could die from the virus, poor healthcare and impoverishment over the next five years, experts warn.

The study, which is due to be published in the Scientific Journal Nanotechnology Perceptions, estimates around 150,000 people will die from coronavirus over five years under semi-lockdown conditions.

Lead author Philip Thomas, a Professor of Risk Management at the University of Bristol, produced the staggering figure based on projected death rates linked to the virus, together with the economic impact of the lockdown and that of previous recessions. 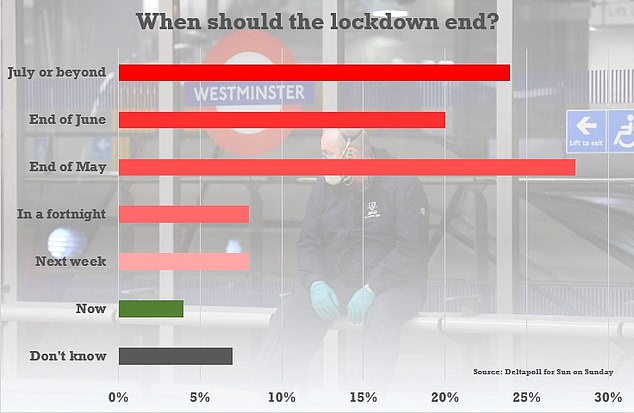 A poll found just 4 per cent believe the draconian restrictions should start to be lifted now, and another 7 per cent were not sure

‘The policy of coming out of lockdown gradually, over five years – which will be necessary if we are to keep the infection rate close to or below 1 – will reduce the toll on life from the coronavirus but incur a far greater loss of life through the impoverishment of the nation.’

The research also revealed that a slow easing of lockdown, which will help avoid a strain on the NHS due to an influx of cases, will likely result in the economy shrinking by up to a quarter in 2020 – and the economy may not recover until 2024.

It comes after the government’s Scientific Advisory Group for Emergencies (SAGE) received warnings that there could be 100,00 coronavirus deaths by the end of the year if measures are relaxed too far and too fast.

NINE IN TEN BRITONS DON’T WANT THE LOCKDOWN TO END

Nine in 10 people do not want the lockdown to ease immediately – with 50 per cent happy to stay off work if they are getting paid or receiving government subsidies.

As Boris Johnson prepares to unveil his ‘exit strategy’, a poll found just 4 per cent believe the draconian restrictions should start to be lifted now, and another 7 per cent were not sure.

Some 44 per cent would prefer later in May, while the same proportion say next month or beyond.

The Deltapoll research for the Sun on Sunday also found half of Britons say they are happy to stay off work as long as they are getting paid or receiving government subsidies, while 25 per cent said they would prefer to return to work if there was a risk to their company or of job cuts.

Just 11 per cent said they wanted everyone to o back to work now.

Meanwhile, a separate survey by Opinium has given a warning sign to ministers, suggesting the public believes the response to the crisis has been worse in the UK than France, Italy and China.

The research found 29 per cent think the UK has handled the situation worse than Italy and Spain. Over half 52 per cent believe the German response has been better.

A study by experts from the London School of Tropical Hygiene and College London modelled different approaches to ‘evaluate which were viable and which were not’ and reportedly concluded there was ‘very limited room for manoeuvre’.

Today’s deaths mean a total of 1,857 patients have succumbed to the virus in Scotland.

The Scottish Government said 13,486 people have now tested positive for the virus in Scotland, up by 181 from the day before.

Of the total 23,150 confirmed reported deaths in England hospitals, University Hospitals Birmingham NHS Foundation Trust has reported the most with 818.

Delays in death reports, uncounted victims who died at home or in care homes, and a refusal to count anyone who hasn’t been tested mean the daily death counts are not the most accurate measure of how many people are being killed by the illness.

Although the overall UK death toll collected by the Department of Health and Social Care stands at 31,855, the real figure is far higher.

The Office for National Statistics says that up until April 24, there were 29,710 deaths across all settings in England and Wales that involved COVID-19.

At the time, a further 2,219 people had died in Scotland, according to National Records Scotland, and 393 in Northern Ireland, its statistics agency, NISRA, shows. This was a total of 32,322.

The number is 42 per cent higher than the count announced by the Department of Health at the time – 22,173 fatalities.

If this was applied to the figures today, it would suggest more than 45,500 people had succumbed to the disease.