Britain at its best: A meander along the 61-mile Weavers’ Way footpath in Norfolk

Sometimes it is best to stumble upon the good things in life. As it was in the case of Weavers’ Way in north Norfolk.

Shamefully, I had never heard of this 61-mile footpath, which meanders from Great Yarmouth to Cromer and is named after the Flemish weavers who came to this sleepy corner of East Anglia as long ago as the 13th century. But my family and I were soon get to know it very well indeed.

It all started with the lure of an afternoon tipple. Felmingham, the village near the house we were renting, had no pub but the market town of Aylsham, four miles away, had a good choice of hostelry, so we set off down a lane – and that was when we saw the little pink signs announcing Weavers’ Way.

Some history. Attracted by the high-quality local wool, many centuries ago Flemish weavers from the Low Countries would cross the wide, flat landscape in a zigzag to meet as many farmers as possible to collect supplies to take home.

They established a well-beaten trading trail. And some of them even stayed. Weavers’ Way, as it became known, passed the yarn-making centres of Aylsham, North Walsham and the village of Worstead, from where Worsted wool originates.

My girlfriend and I put on our walking boots, consulted a map and set off, sampling different stretches as our week unwound and our curiosity grew.

One of the joys of hiking in Norfolk is that it is flat – and the section between Felmingham and Aylsham is a good first taster, passing along a disused railway line, with no hills whatsoever.

Aylsham Linen was once famous across the country, with clothing made from the wool of local black sheep. The well-to-do buildings of the distinguished town centre are a testament to its rich past.

The section from Aylsham to the market cross at the town of North Walsham is especially enjoyable. This little town has an ancient flint church, and Lord Nelson was educated here at Paston College. 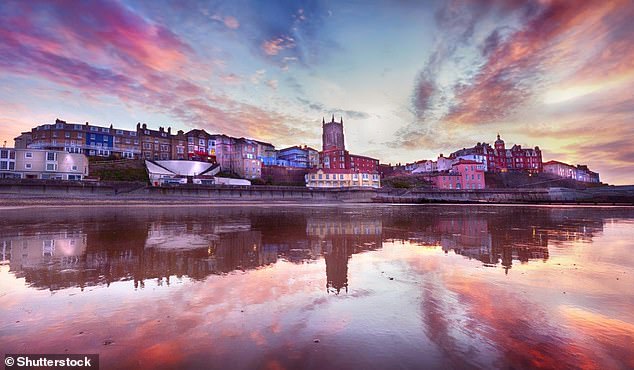 A view of pink skies over Cromer, where the Weavers’ Way footpath comes to an end

Beyond North Walsham, heading southeast, is pleasant countryside. We were lucky enough to see a deer dart from a copse and leap across a ploughed field right before us – as though it was putting on a show.

Another discovery was a former railway track leading to the remains of a station at the village of Honing, just a mile or so from Worstead. This had an eerie feel: once part of the Midland and Great Northern Joint Railway, the line closed in 1959. Now the platforms and the station building are covered with weeds.

Our biggest adventure was the 17-mile stretch from Felmingham to Cromer.

This walk is quite an undertaking and comes with two highlights: Blickling Hall, which dates from the 15th century, and Felbrigg Hall, from the 17th century, both run by the National Trust. We reached Blickling to admire its grand staircases, oriental-themed bedrooms, fine library, walled gardens, lake and halls with portraits of Henry VIII and Sir Robert Walpole. 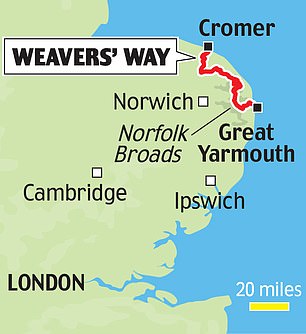 During World War II, the Hall served as the officers’ mess for RAF Oulton. In the countryside beyond Blickling, we imagined Flemish folk of centuries past travelling along these ancient ways loaded with bundles of finest Norfolk wool. Their ghosts were our company as we strode forth in the bleakly beautiful landscape.

It was a long, winding hike, accompanied by flutters of startled wood pigeons and the tap-tap-tap of woodpeckers, to Felbrigg Hall. This arises on the horizon in full Jacobean splendour: redbrick and grey-stone, with high mullioned windows facing elegant gardens.

What a place: inside, a flamboyant great hall leads to chambers with paintings of Italy acquired by William Windham II on his Grand Tour, dining rooms with crystal chandeliers, an oriental-themed bedroom (wallpaper ordered from China and delivered by the East India Company) and a well-stocked wood-panelled library. Amid the many leather-bound tomes is an original copy of Samuel Johnson’s dictionary.

It is a good idea to start very early to allow a full day for this long walk (especially if you stop at both Blickling and Felbrigg). We took a look around the old house, before exploring the walled garden and the orangery – and then returning to Weavers’ Way.

By this stage, we were just about dead on our feet. Down a hill (such a thing exists in Norfolk) we ambled onwards at a snail’s pace to the north coast.

Cromer is mentioned as having ‘very pure air’ in Emma by Jane Austen. Our reward for following in the footsteps of ancient Flemish weavers was a wintry blast of Austen’s air while eating superb fish and chips. Those Flemish weavers never had such a treat.