Britain at its best: Discovering St Michael’s Mount in Cornwall

Britain at its best: Savouring our very own Mont-Saint-Michel – a castle-crowned tidal island of craggy slate and granite that rears 200ft out of the Atlantic off the Cornish coast

By Martin Symington For The Daily Mail

From Cudden Point headland, a couple of miles along the Cornish coast, St Michael’s Mount looks like a truly forbidding fortress.

But from the seafront of the small town of Marazion opposite, it somehow softens into pure fairytale. Rapunzel might have let down her tresses from one of the turrets.

The tidal island is uncannily similar to its twin in Normandy, Mont-Saint-Michel, from where Benedictine monks first arrived in 1044. It has been secular since the English Civil War, when it was held by Royalists as one of their last strongholds against Roundhead forces. Since then it has been a rather unusual family home. 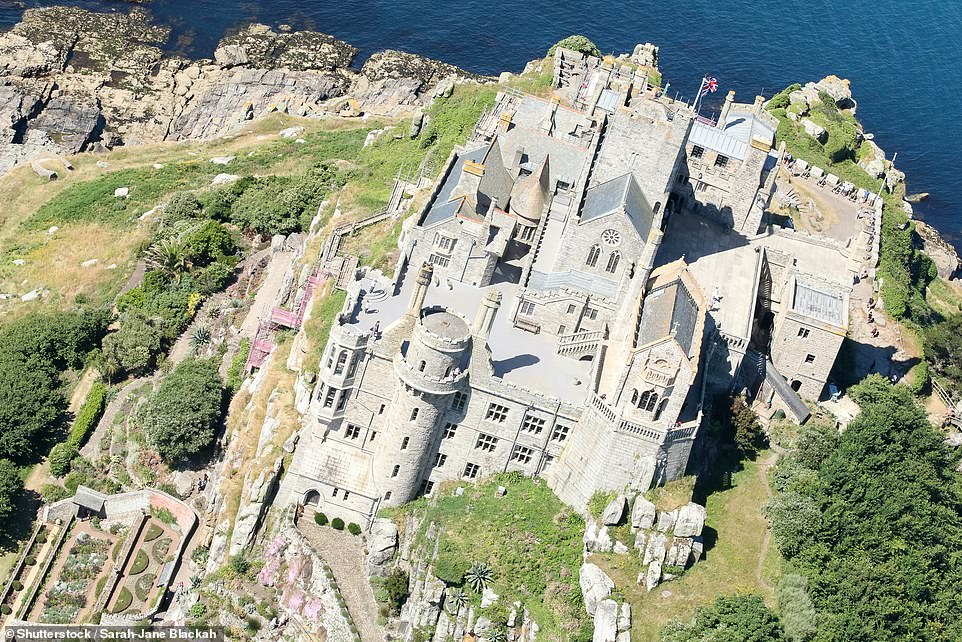 The St Aubyns have lived in the island’s historic castle since 1660. James St Aubyn (aka Baron St Levan) and his wife Mary occupy a private apartment in the castle

The castle-crowned tidal island of craggy slate and granite rears some 200ft out of the Atlantic. For approximately two hours either side of high tide, waves roll in over a causeway, disconnecting mount from mainland.

While I wait for the waters to ebb, I let my senses drift over the centuries to legends of St Michael, from fishermen to the plainchant of long-banished monks. Then I catch a glimpse of a man walking on water. At least, that’s what it looks like. The figure is followed by a string of other souls as they trot from Marazion to the island.

Soon it is my turn to stroll the few hundred yards across the cobbled causeway. Since reopening after lockdown there have been no passenger boats, so visits are restricted to the four hours around low tide when the causeway is uncovered. Tickets to tour the castle and visit the gardens must be bought in advance online.

A steep path leads up to the castle, which is a jumble of periods and styles. The St Aubyns have lived in the castle since 1660. James St Aubyn (aka Baron St Levan) and his wife Mary occupy a private apartment in the castle.

He tells me: ‘We live here under an arrangement with the National Trust, to whom my grandfather gave most of the island in 1954.’ The family is looking for a new live-in castle officer to take a ‘hands-on approach’ to maintenance duties. I’m tempted to apply.

Touring the castle (mask on, compulsorily), I pause in the original monastic refectory which is now known as the Chevy Chase Room. The huge oak table and 17th-century plaster frieze of cartoonish hunting scenes suggest more rumbustious times. 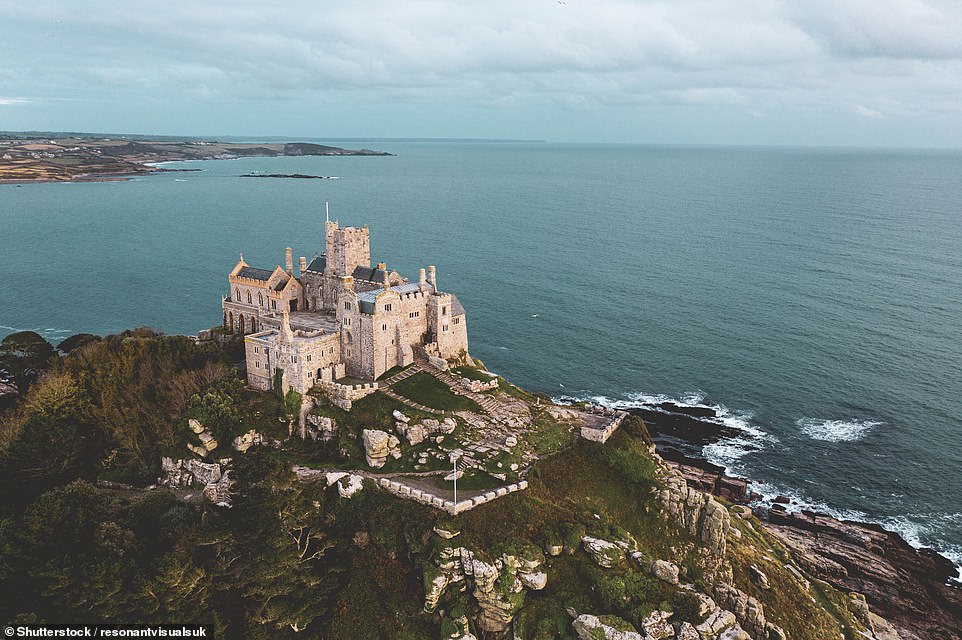 The tidal island is uncannily similar to its twin in Normandy, Mont-Saint-Michel, from where Benedictine monks first arrived in 1044 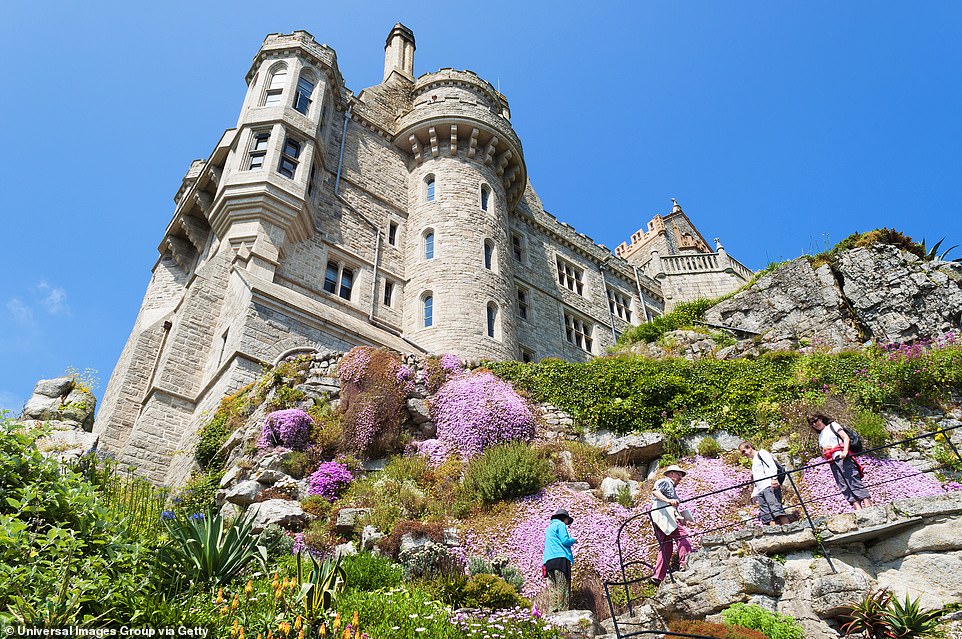 Sub-tropical plants, which would struggle to survive anywhere else in Britain, cling to the castle’s rocky slopes

Get tide times and book for the Castle or Garden Terraces (open from May 20 and 26 respectively) from £10 at stmichaelsmount.co.uk. B&B doubles at Polurrian On The Lizard Hotel from £119 (polurrianhotel.com).

The Garrison Room is stuffed with exotic treasures collected by the St Aubyn family during colonial exploits. My favourite is a magnificent suit of Samurai armour gifted by the Japanese emperor.

I find an ingenious tidal clock made in 1785 to help the St Aubyns time their crossings. Stranger still is the model of the mount made out of champagne corks by a butler in the 1930s.

From the castle terraces there are expansive views across the sea to the Lizard peninsula, and vertiginously down to the gardens, which I drop in on next.

It is pretty amazing that a garden exists at all on this salty hunk of windblown rock. But the Gulf Stream tempers the climate. So sub-tropical plants, which would struggle to survive anywhere else in Britain, cling to rocky slopes and terraced beds that tumble down to the water’s edge.

A guide tells me that gardeners can sometimes be seen abseiling down the cliffs, doing the weeding. I climb the steep garden trails, with their weird-looking cacti and blooms. My phone’s plant app identifies puya, agave and aloe.

Then I notice a sylph-like woman with purple hair consulting a talismanic piece of stone in her hand. She says: ‘We’re on St Michael’s Alignment ley line connecting with Glastonbury. This is a very sacred place, don’t you think?’

I am unsure what to think.