Britain at its best: Unlock the real-life Narnia in Herefordshire’s Golden Valley

By Harry Mount for Daily Mail

When the author C.S. Lewis was a boy in Belfast, he thought a painting of Herefordshire’s Golden Valley was a picture of heaven. The scene appears in the 1993 film, Shadowlands, starring Anthony Hopkins as Lewis.

I know exactly what Lewis meant. As a boy, visiting my great-aunt in Herefordshire, I was overwhelmed by the ancient beauty of the valley. When I returned this summer, I found this corner of the country largely untouched by the passing of time.

When he came to write The Chronicles Of Narnia, Lewis was inspired by Arthur’s Stone in the Golden Valley. The 5,500-year-old tomb, Herefordshire’s oldest building, is fancifully named after King Arthur (free, open all day, english-heritage.org.uk). It’s the origin of the Stone Table on which Aslan is sacrificed in The Lion, The Witch And The Wardrobe.

Unspoilt: Bredwardine Bridge over the River Wye in Herefordshire

The Golden Valley isn’t, in fact, gold-coloured. The rolling countryside is a lush green, dotted with dusty pink sandstone churches and houses.

It took its name from the River Dore — wrongly confused with the French d’or, meaning gold. The valley runs through west Herefordshire, close to the Welsh Border —thus the Welsh local names.

You can see why Lewis was moved to set his magical fantasy world of Narnia here. The Golden Valley has an other-worldly feel.

The River Dore rises in Cusop, in the foothills of the Black Mountains, near the bookshop-crammed town of Hay-on-Wye, renowned for its literary festival.

This is where the Victorian vicar-diarist, Francis Kilvert, wrote his moving, funny entries about rural life in the late 19th century.

Follow the River Dore and you’ll come to the enchanting villages of Dorstone and Peterchurch, where you can go inside St Peter’s to see its rare sequence of three Norman arches. Next you’ll come to Abbey Dore, home to what was once the Cistercian Dore Abbey, and is now the parish church of St Mary’s. It’s on a socking great scale, even though the 250 ft nave fell apart after the Reformation. 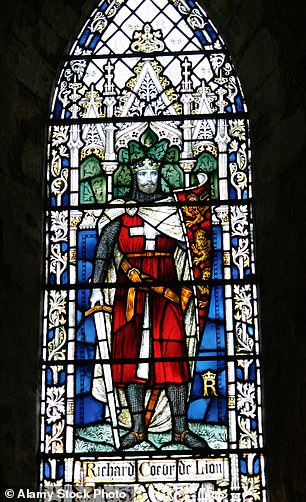 A stained glass in Dore Abbey

There’s a rich musical tradition at Abbey Dore — check its website (doreabbey.org.uk) for recitals and concerts.

For a less imposing, but just as delightful, church, head to Kilpeck, five miles from Abbey Dore. It’s celebrated for its 12th-century doorway — covered in stone serpents, dragons and lions’ heads. Round the outside of the church, there are more sculptures: of lovers, a fiddle-player and, close your children’s eyes, a sheela na gig, a Norman woman doing something rather athletic.

The whole of the Golden Valley is within easy striking distance of the county hub, Hereford. Don’t leave the city or Herefordshire without visiting its cathedral, a glorious mishmash of Norman, Georgian and Edwardian buildings.

Jerusalem is in the centre; Britain at the bottom left. Hereford’s place has been rubbed away to an indistinct building on the River Wye by hundreds of medieval pilgrims pointing to the city. How excited they were to come to this crucial, historic corner of ancient England. How excited you will be, too.