Britain at its best: It’s a bit of all Wight in Bembridge

It’s a bit of all Wight! Boaties and beaches abound in the chic, upscale resort of Bembridge

By Maureen Brookbanks for the Daily Mail

We emerge from our beach hut looking like a couple from a Donald McGill postcard. My husband’s swimming trunks are the wrong side of billowing; my pink-and-white-striped costume would make Olive Oyl look rotund.

Such are the perils of packing poorly for a seaside break in the UK. Guided by the BBC weather app, I had planned for our week on the Isle of Wight as if Hurricane Maria was heading our way, packing a single swimming costume for our three-year-old daughter, Grace, just in case she insisted on a splash in the sea through the showers.

Cue blue skies, endless sunshine and a week of 28C heat. We make an emergency visit to a little beachfront shop to buy those appalling swimming costumes.

Beautiful Bembridge: The resort exudes a yachtie chicness that contrasts with other down-at-heel spots on the Isle of Wight. Queen Victoria knew that the island was fashionable, building her summer home, Osborne House, in East Cowes to escape the stresses of London life

The shame is all the greater because, while parts of the Isle of Wight are distinctly down at heel, there’s a yachtie chicness to certain spots, such as Seaview and Bembridge. But, then, the Isle of Wight has long been fashionable with those in the know.

You could say Queen Victoria started the trend in the 19th century, when she built her summer home, Osborne House, in East Cowes to escape the stresses of London life.

After a 45-minute ferry journey from Portsmouth (you can zip across in just ten minutes on the hovercraft from Southsea), we drive east to the harbour village of Bembridge. The whole place looks as if it’s been styled by John Lewis: red, white and blue bunting decks houses painted in elegantly neutral shades of stone and grey.

Home for the week is a beautiful, nautically themed apartment at Nab House, a converted Victorian property so delicious it makes me want to redecorate our London home. It’s just two minutes’ walk from the sandy beach.

Early evenings are spent at the nearby Crab & Lobster Inn, which dates back to the 1860s, when it was a favourite of fishermen and smugglers. Today, the crabs and lobsters on the menu are caught from the seafront at the end of the garden.

After dinner, my husband and I have our usual holiday-inspired, wine-fuelled conversation, only this time with more intensity. Is there any way we could wangle even a tiny holiday home here? 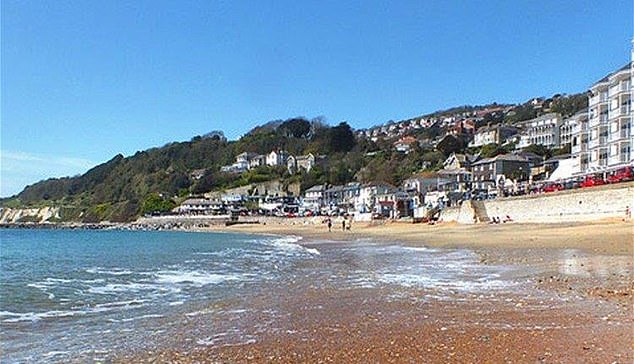 Seaside nostalgia: Ventnor beach, about ten miles south of Bembridge, is all pretty pastel beach huts, blonde Boden-clad sunbathers reclining on deckchairs and posh fish-and-chip shops, such as the Ventnor Haven Fishery, which serves a moreish lunch of crab on chips

Blessed by a micro-climate where it rarely rains (despite what the BBC might tell you), Bembridge has mahogany-tanned retirees, yachties and second-home owners; all, we soon cotton on, to be envied for their blissful routines of chinking glasses after enjoying a good day’s sailing, golfing or sunbathing.

Ventnor beach, about ten miles south of Bembridge, turns out to be a perfect day-trip; gorgeous in a nostalgic sort of way — all pretty pastel beach huts, blonde Boden-clad sunbathers reclining on deckchairs and posh fish-and-chip shops, such as the Ventnor Haven Fishery, which serves a moreish lunch of crab on chips.

Far calmer than Ventnor is Bembridge harbour beach, or Embankment Beach, as it’s also known. At the north end of Bembridge village, it’s wonderfully quiet, with appealing houseboats and a huge stretch of golden sand that’s perfect for children. We spend another morning, backpacks and Tupperware picnic in tow, touring the Isle of Wight Zoo.

On returning to the mainland, we try despairingly to calculate how on earth (winning lottery tickets aside) we can become part of the lucky band who have bought a slice of this lovely island life.

We can but dream.

Seven nights’ self-catering at Nab House is available from Sykes Holiday Cottages from £504. To book, visit sykescottages.co.uk or call 01244 617683.