Britain has a ‘sick economy’ says Jeremy Corbyn as he vows Labour will ‘proudly put people before privilege’ if it wins a general election to create a system that boosts ‘health, wealth and well-being’

The opposition chief said his party will announce new policies that value the ‘health, wealth and well-being of every citizen’ rather than one that ‘inflates the wealth of the richest while failing to invest in our future’.

The vow came ahead of Labour’s annual conference, which starts in Brighton on Saturday, where party activists will attempt to turn the party further to the left.

They include a bid by grassroots members to revert to the original version of the key Clause IV of the party constitution, which was written at the same time of the Russian Revolution and commits to taking over businesses and utilities.

Labour today highlighted its own analysis of Office for National Statistics (ONS) data, claiming it showed the ‘dramatic scale’ of inequality in the UK, highlighting how the richest 10 per cent of people in London having overwhelming economic power.

Mr Corbyn said: ‘The dramatic scale of wealth inequality in our country is a sign of a sick economy.

In the running to be prime minister? 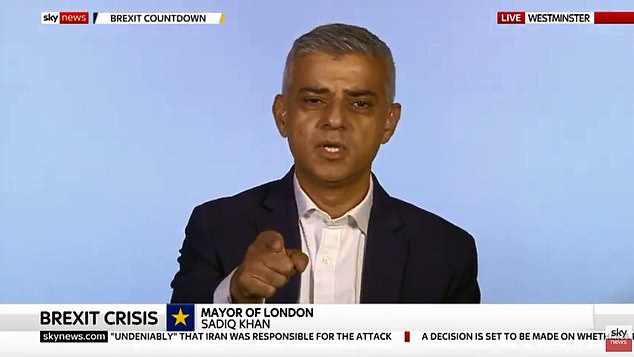 Sadiq Khan told Sky this morning (pictured): ‘What I would be against is going back 100 years to try and put in our constitution something that was out of date 25 years ago, let alone in 2019’

‘The system is broken when it inflates the wealth of the richest, while failing to invest in our future.’

Mt Corbyn’s remarks on privilege may provoke some accusations of hypocrisy however.

He comes from a comfortable middle class background and attended a private prep school, as did shadow chancellor John McDonnell.

Two of his key aides, Andrew Murray and communications chief Seumas Milne were both privately educated and Murray is from an aristocratic family.

Party activists want to revert to the original version of Clause IV, which was written in 1917, and have tabled a motion for the Labour Party conference in Brighton this weekend.

Mr Blair’s changes to the section were a symbol of the party’s return to electability in the 1990s.

The original wording called for the party to ‘secure for the workers by hand or by brain the full fruits of their industry’ via ‘common ownership of the means of production, distribution and exchange’.

Mr Blair led reforms which changed it to support’ ‘a dynamic economy, serving the public interest, in which the enterprise of the market and the rigour of competition are joined with the forces of partnership and co-operation to produce the wealth the nation needs’.

However the party’s NEC is understood to have told the constituency Labour party (CLP) responsible to withdraw it at a Tuesday meeting, or the party will recommend members vote against it.

Labour under Mr Corbyn has been more open to nationalisation than under Tony Blair and Gordon Brown, with calls to take the railways, water and power utilities, and the Royal Mail back into public ownership.

‘And we know that concentrations of wealth generate unaccountable power, corrupting our politics in the process,’ he said.

‘But we can change things. Democracy moves power from the bank balance and the boardroom to the voting booth.

‘The next Labour government will proudly put people before privilege, building an economy that values the health, wealth and wellbeing of every citizen.’