Britain is set to be battered with torrential rain and 70mph winds today as Storm Ellen sweeps in promising two days of chaos.

The storm, which contains the remnants of Tropical Storm Kyle, will bring heavy gales as it hits Ireland, before dominating the UK for the rest of the week.

The tempest will batter the West Country before sweeping across southern England and the Midlands.

The Met Office says we could see as much as 50mm of rain over higher ground, falling within the space of six hours.

A warning for gales will also come into force at 8pm tonight and will last across all of Thursday with gusts of up to 65mph are forecast inland along with 70mph gusts along the coast.

Tourists were warned not to stand on promenades or rocks taking selfies in the storms – they could be swept into the sea and drown. 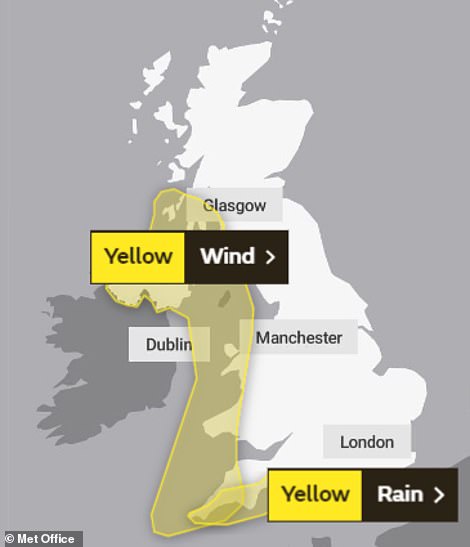 Heavy rains are set to strike and a storm surge, spring tides and onshore winds may trigger coastal flooding as Storm Ellen batters Britain this week. The Met Office has also issued a yellow weather warning for wind on Wednesday and Thursday which names western parts of Wales, south-west Scotland and all of Northern Ireland 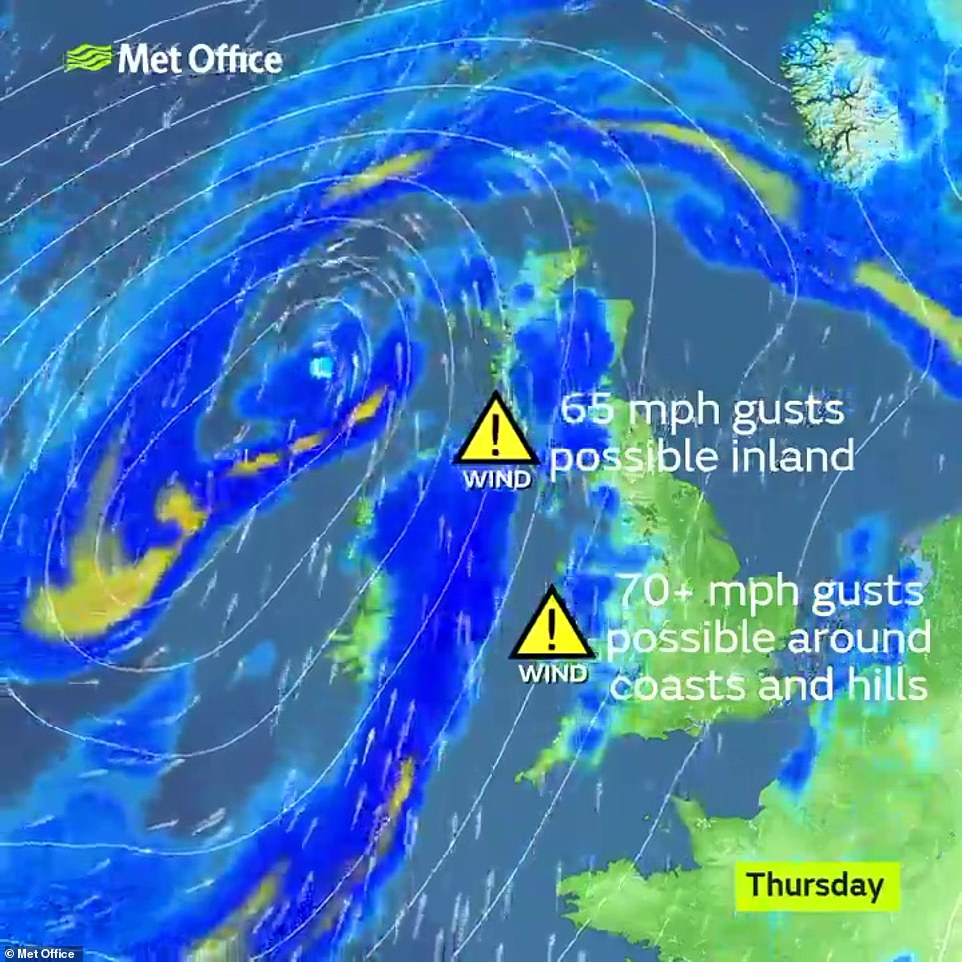 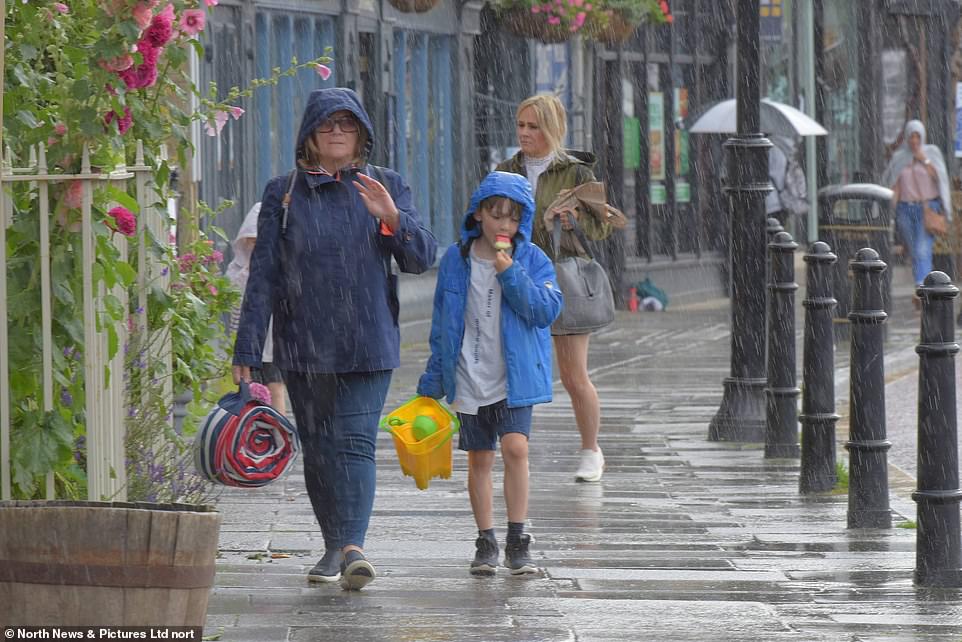 Visitors to the popular tourist destination Tynemouth Village in Nortumberland are hit by a deluge of rain yesterday afternoon, with the stormy weather set to continue 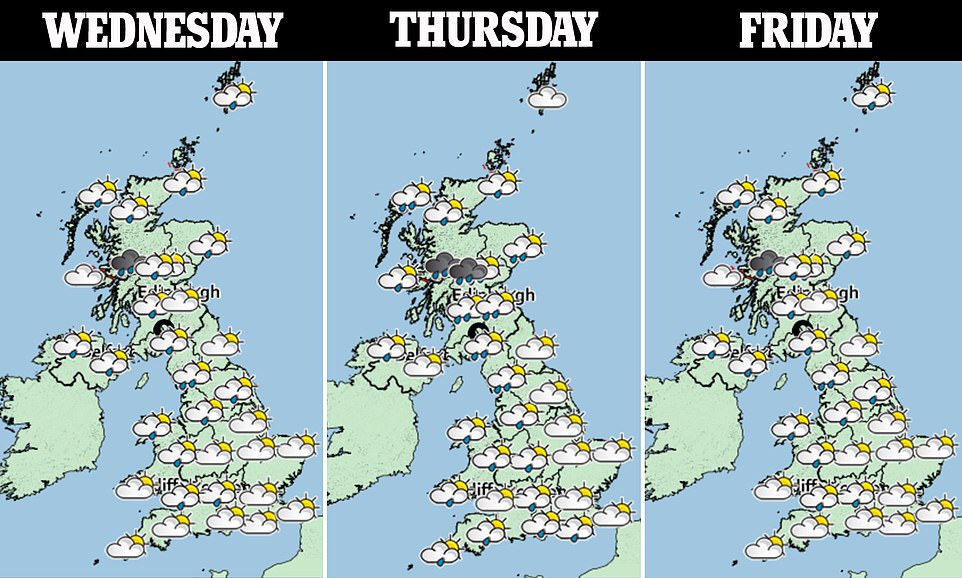 The Met Office says there could be disruption to travel, debris on the roads and power cuts as trees crash across overhead lines.

Heavy rains are set to strike and a storm surge, spring tides and onshore winds may trigger coastal flooding.

The Met Office has also issued a yellow weather warning for wind on Wednesday and Thursday which names western parts of Wales, south-west Scotland and all of Northern Ireland as being at risk of being hit by the strong winds.

A yellow weather warning stretching from Cornwall to south-west Scotland is in place from 8pm to midnight on Wednesday predicting strong winds which could cause some disruption to travel and power supplies on Thursday.

The stormy conditions represent a dramatic turnaround from the extreme heatwave experienced in Britain up until last week which saw temperatures of at least 93F (34C) for six days in a row for the first time on record.

Residents in Barnstaple, Devon, are still mopping up after torrential rain flooded shops and homes earlier this week.

Now they face another soaking as the latest storm tears a path across Ireland and slams into the UK today.

Some regions can expect rain all day – bang in the middle of the main summer holiday season.

Most of the UK can expect strong winds and rain over the coming days, the Met Office warned.

Met Office Chief Meteorologist, Steve Ramsdale said: ‘Following the recent hot and thundery weather we are seeing a significant change to very unsettled conditions for August with an unseasonal spell of strong winds associated with low-pressure centres for the second half of the week.

‘Uncertainty remains high in the intensity of these systems at this point, but we are confident in the change to a spell of much windier weather.

‘Tropical air associated with a decayed tropical cyclone is being drawn towards the UK, and the marked contrast between this warm and moist air with normal North Atlantic airmasses can lead to a very vigorous system.’ 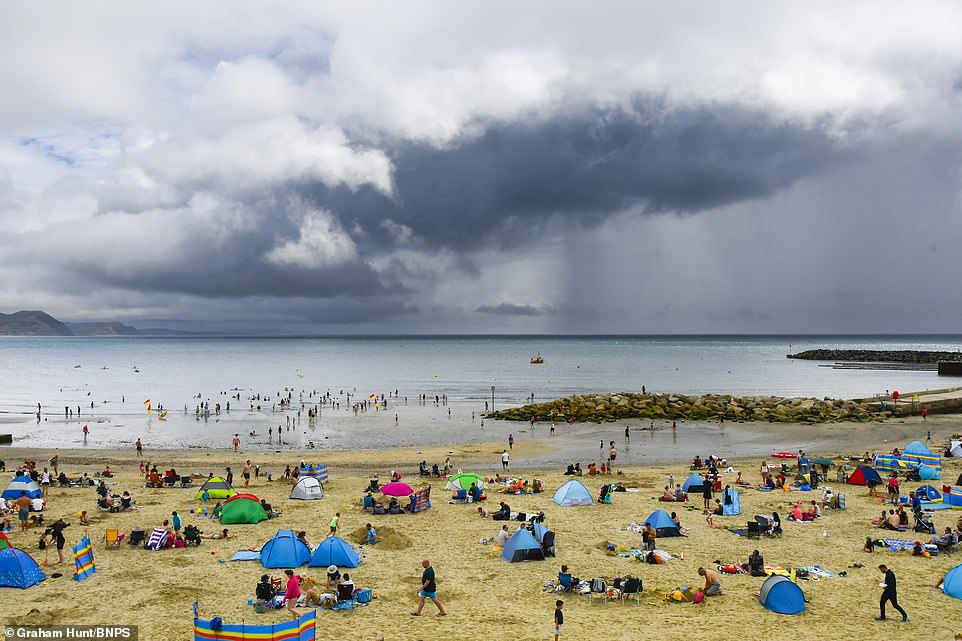 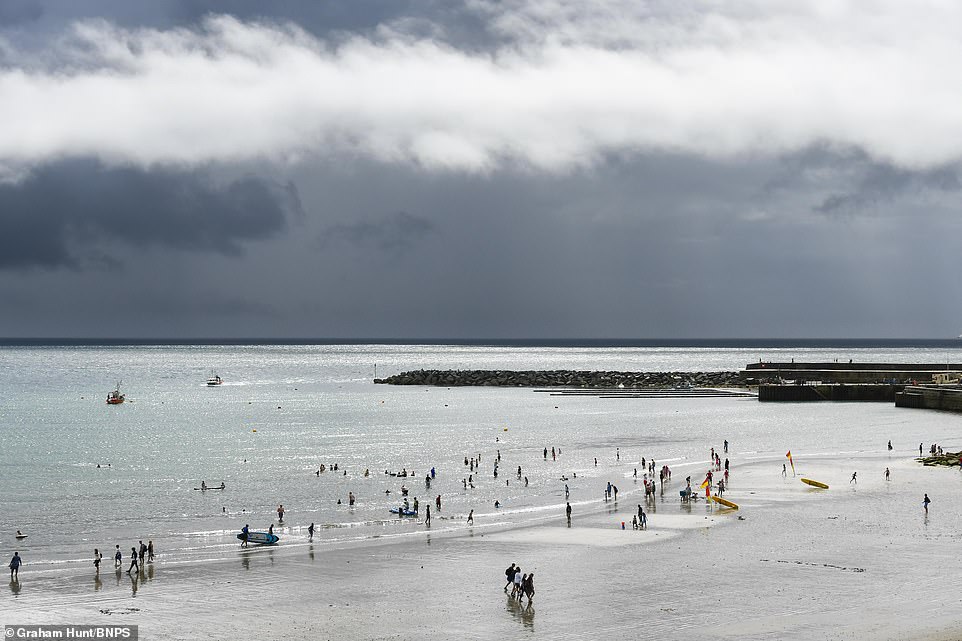 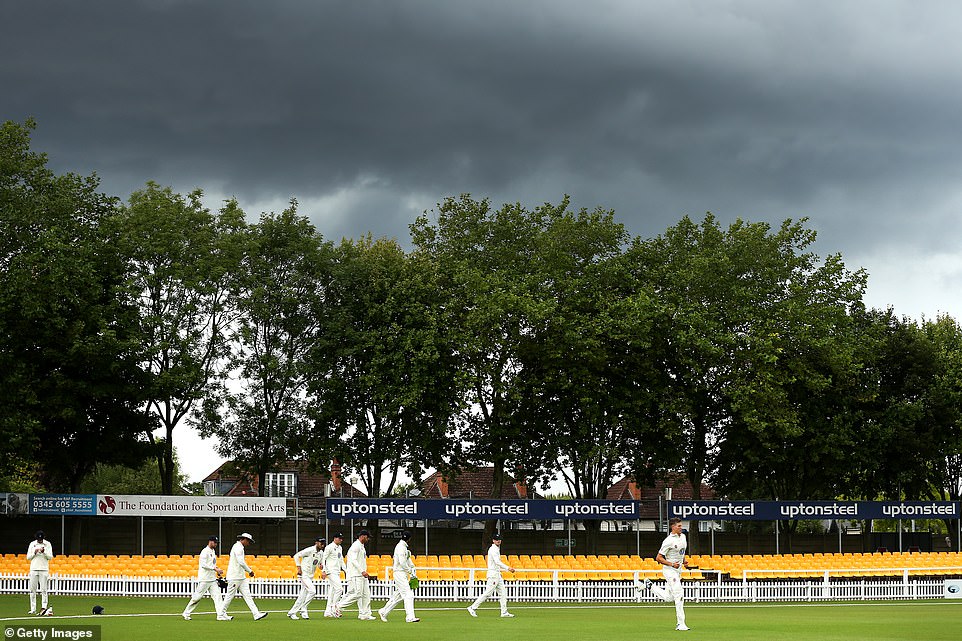 He described it as a ‘very vigorous’ weather system that has been created by the warm and moist air from a decayed tropical cyclone with normal North Atlantic air masses.

Temperatures are set to be much lower than the last 10 days, which have seen 86F-plus heat in many places.

Parts of East Anglia could still see highs of around 82F on Thursday.

Deputy Chief Meteorologist, Matthew Lehnert said: ‘Along with the sometimes heavy rain, strong winds have the potential to cause impacts that are not common in August.

‘With this spell of unsettled weather coinciding with trees in full leaf and a peak in the camping season, wind-related impacts are more likely at lower wind speeds compared to other times of the year, particularly across Northern Ireland where winds are forecast to be strongest.’

RAC Breakdown spokesperson Rod Dennis said: ‘This spell of autumnal-feeling weather is going to make driving conditions very unpleasant for a lot of us over the next few days.

‘Strong winds will mean journeys by road will take longer than usual, and could be affected by fallen branches on the roads. Add in some very intense rainfall and drivers will need to take real care to complete their trips safely.

‘We urge every driver heading out to make sure their car is up to the task to avoid a breakdown in the wind and rain, especially if they’re towing or taking a longer trip – in particular check the condition and pressure of all tyres before setting out.

‘When driving, slow down and pay close attention to high-sided vehicles and other drivers with caravans and trailers to give yourself plenty of time to react should any run into difficulties.’