Staycationers were today warned not to travel to Cornwall unless they have a booking as a huge 65-mile traffic jam formed on the M5 flash flooding causing major delays.

Queuing traffic has also been pictured on the M25 and a series of major roads in the West Country, with an eight-mile journey on the A30 taking one hour.

And with tourism bosses stating the region is already at full capacity, anyone without a confirmed booking is being urged to stay away.

Roads have been flooded with water amid flash floods as Britain faces half a month’s worth of rain expected to fall in just three hours, with 5.6 million people taking to the roads to get away for the bank holiday weekend.

A yellow storm warning remains in place for a swathe of southern England and South Wales, with another warning for rain covering the north east.

The RAC expects record-breaking traffic as staycationers hit the roads before the long weekend, and the M25 in Kent was already rammed with traffic by early this morning.

The Met Office expects parts of the country to see up to 40mm worth of rain in just three hours – compared to last year’s monthly total of 76.7mm. 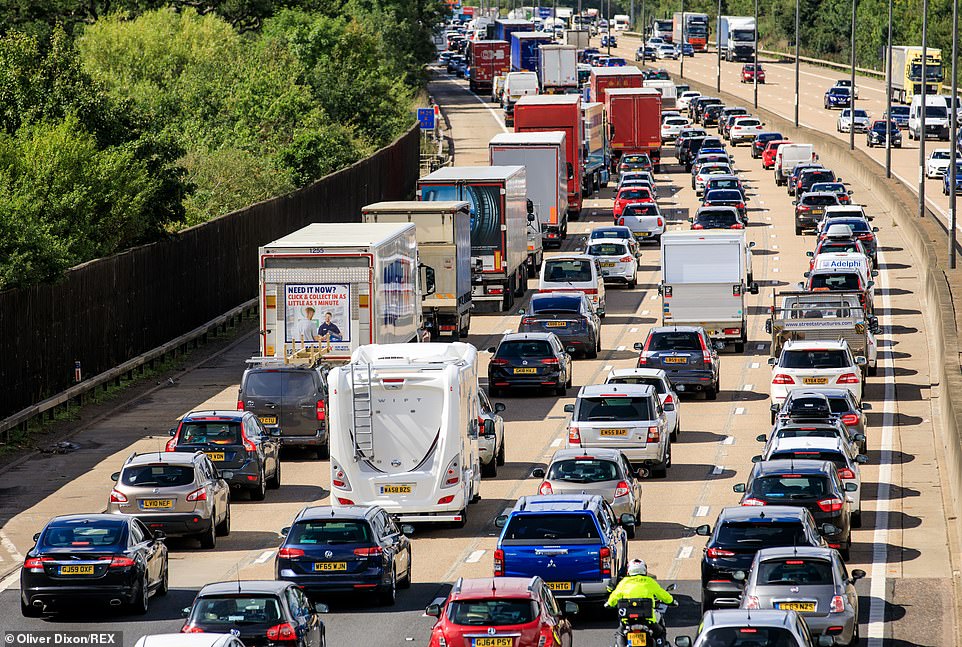 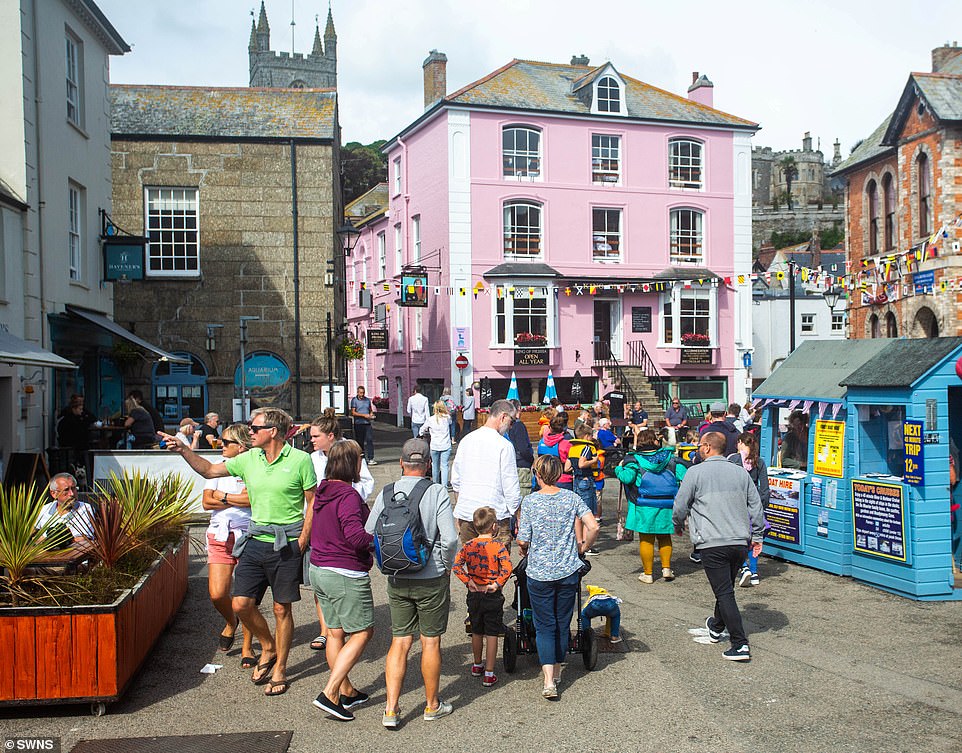 Tourism bosses are warning people to stay away unless they already have a booking. Pictured is Fowey town centre 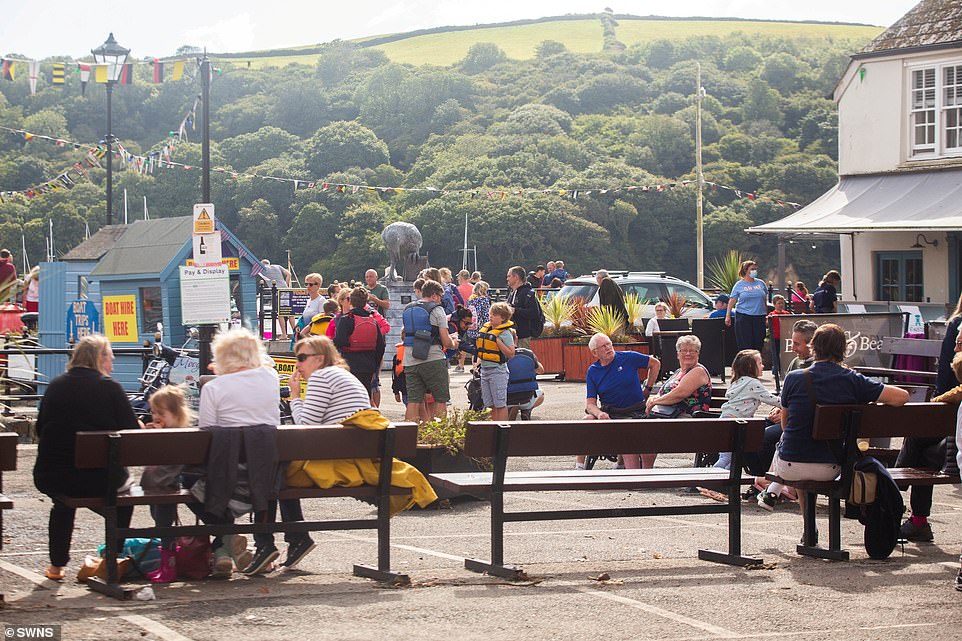 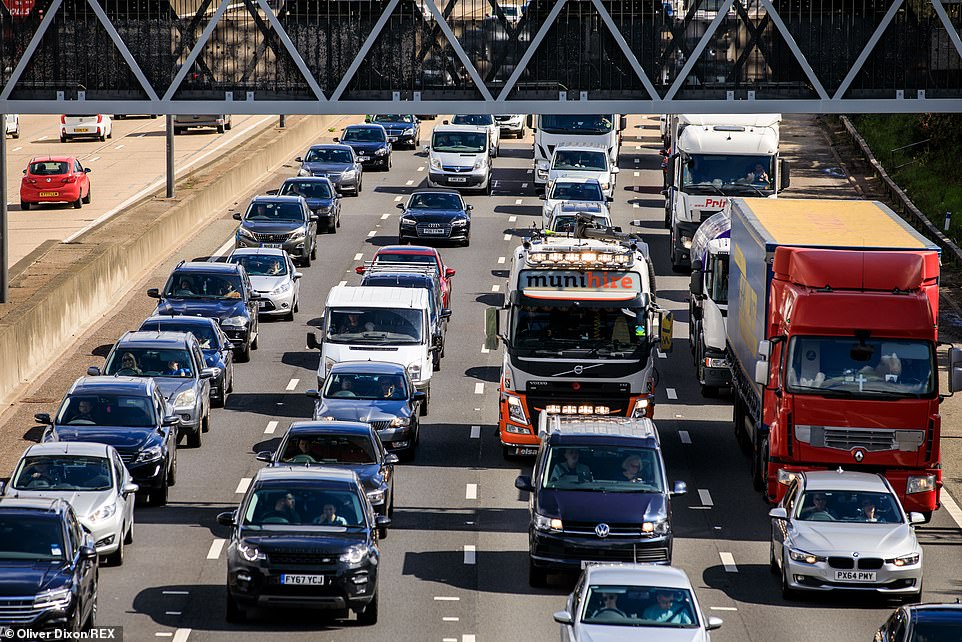 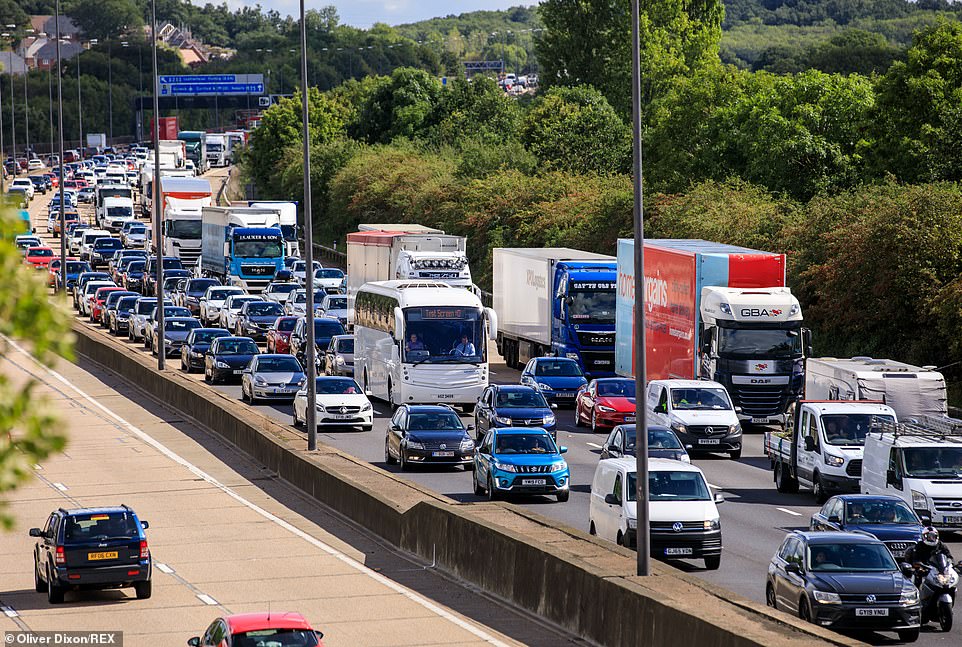 This Bank Holiday Weekend is expected to see the busiest roads so far this year. Pictured is heavy congestion on the M25 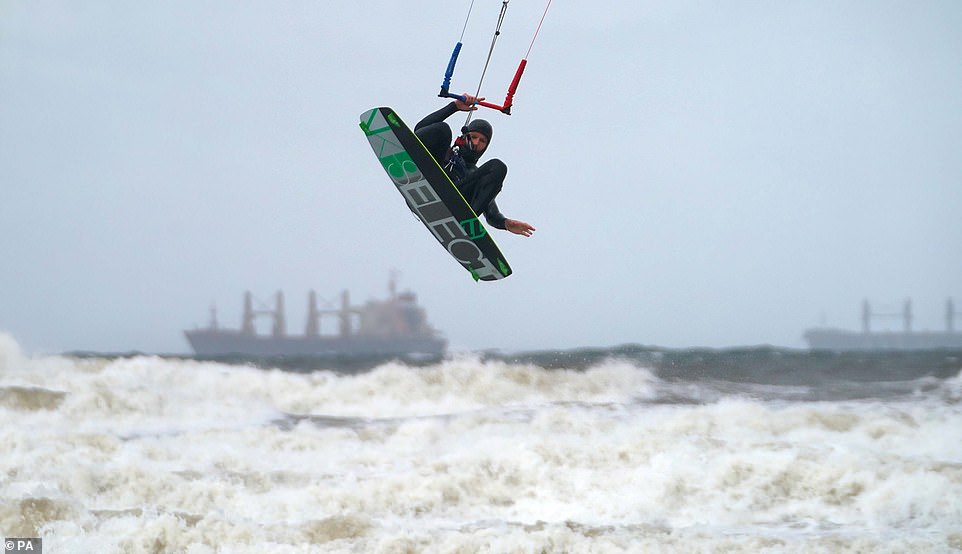 Kite surfers are pictured off Tynemouth beach in north east England on August 28. Forecasters predict this Bank Holiday Monday could be the coldest on record for some parts of the UK 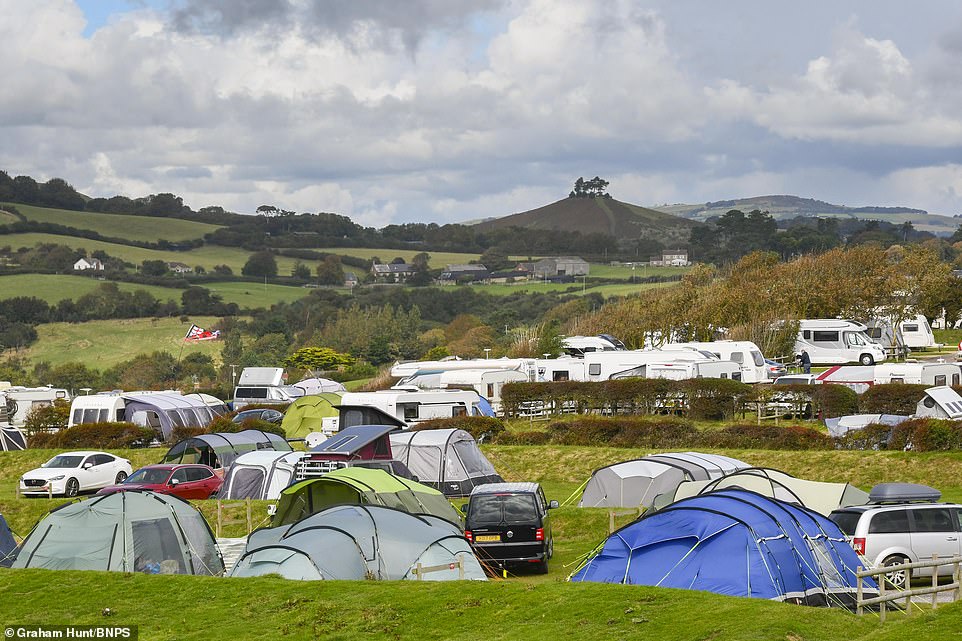 The windswept Highlands End Holiday Park at Eype near Bridport in Dorset, where most of the slots had been filled by visitors 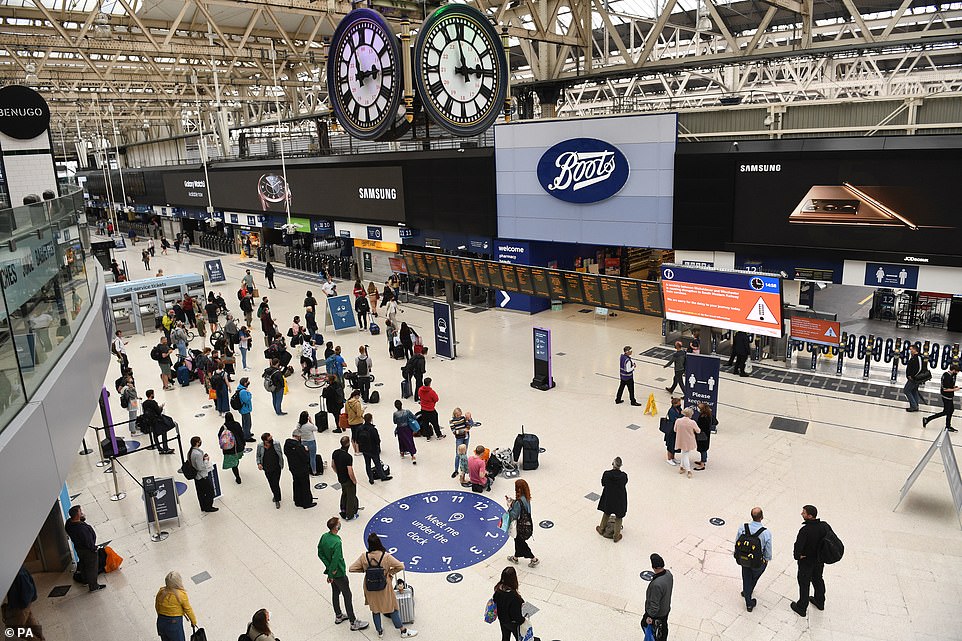 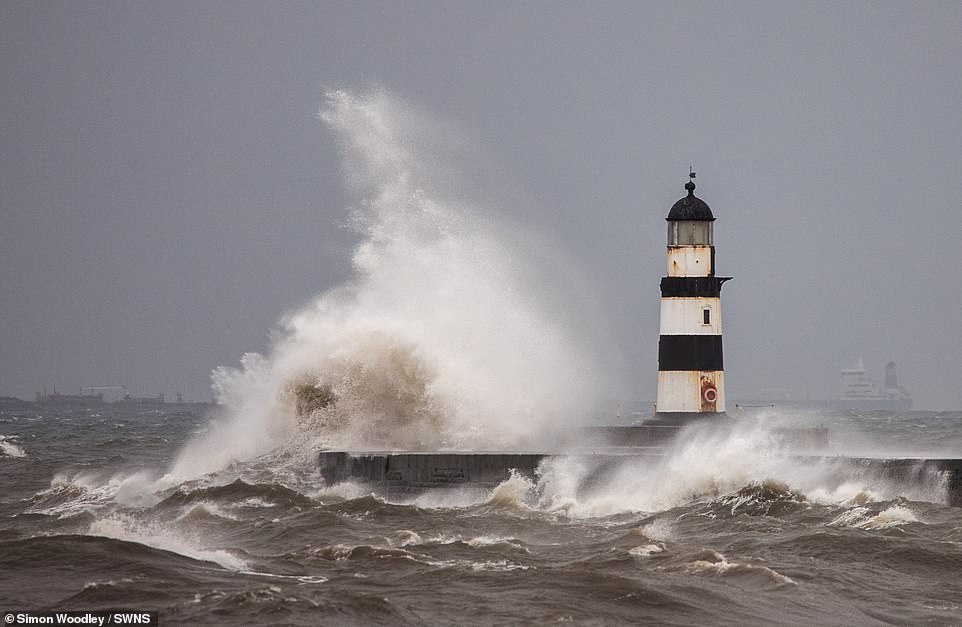 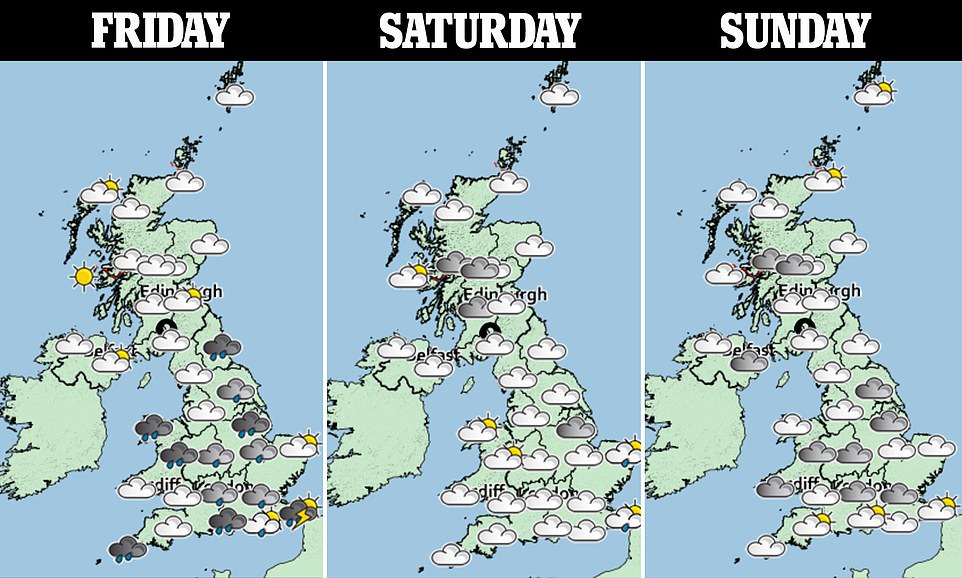 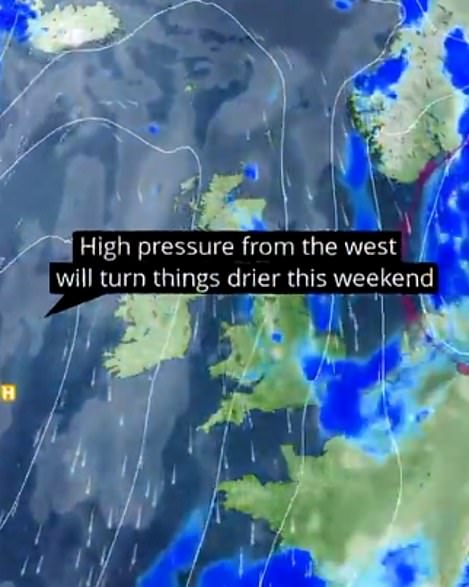 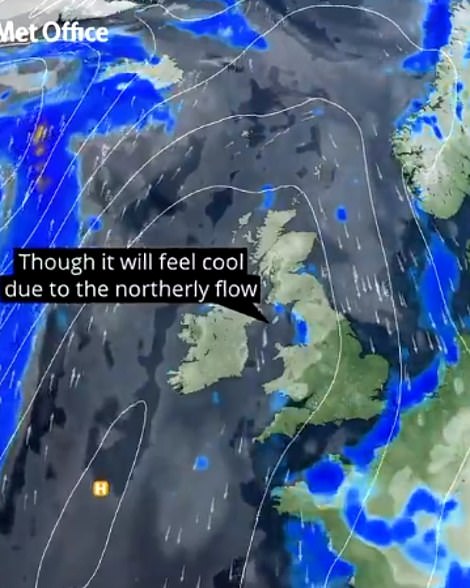 Saturday and Sunday: These weather graphics produced by the Met Office shows how Britain’s weather will become drier as the weekend progresses 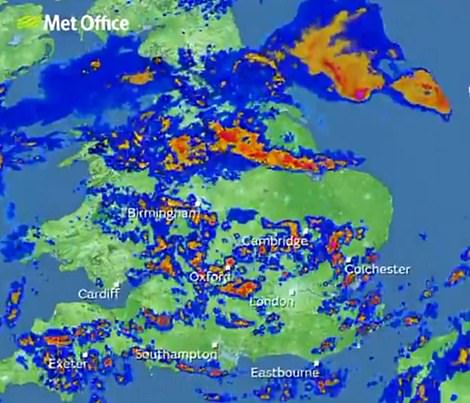 A graphic showing rain sweeping across England and Wales this afternoon

Assistant Chief Constable Glen Mayhew, of Devon and Cornwall Police, said: ‘Ahead of what is traditionally a peak weekend for the South West all emergency services and partners have been working together.

‘We are confident the South West is well prepared and look forward to enjoying the sunshine, but planning any journey to Devon and Cornwall is hugely important.

‘If you travel without booking accommodation first you are unlikely to be able to find any in the region when you arrive.’

Simon Fishwick, Company Secretary & Directorn of Visit Devon, told MailOnline: ‘Devon and Cornwall are going to be very busy over the next few days and our message to all visitors is to plan ahead and enjoy the weekend safely.

‘Reports are that most businesses are experiencing high levels of bookings and this is not the time to turn up on the off chance that something might be available.

‘Our advice is to do your research, plan your visit, book your accommodation and visits to attractions, restaurants, etc in advance but heed social distancing measures and safety advice especially on the coast. We would like everyone to have a great time but safety must be to the forefront of everybody’s mind.’

Forecasters say this Bank Holiday Monday could be the coldest on record for some parts of the UK as temperatures are expected to be well below average for the time of year.

Residents have been rescued from their homes by firefighters with boats following flooding in central Scotland.

The Scottish Fire and Rescue Service (SFRS) received calls to ‘significant flooding’ incidents in West Lothian due to heavy rain on Thursday evening. 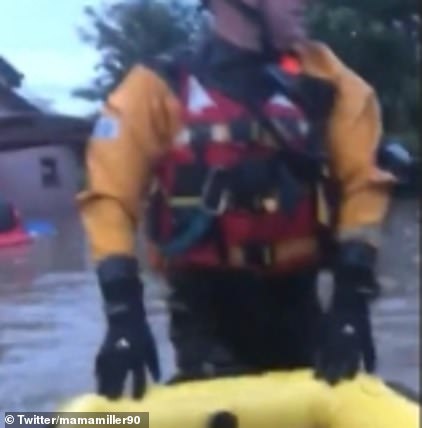 A firefighter helping to evacuate homes in West Lothian yesterday

They were also called to incidents in Linlithgow and Ratho.

SFRS said they worked with other emergency services and local authorities to support those affected.

Pictures posted on social media showed cars deep in floodwater and bins floating down the street.

Aimee Miller tweeted: ‘Street flooded.. all of us rescued by the amazing fire brigade with their boats ! Hope everyone else is ok.’

Heavy rain caused transport problems across the central belt on Thursday, leading to trains being suspended and road closures.

ScotRail warned services across the country would be delayed or cancelled due to ‘extremely heavy rain flooding’.

On Friday, the rail company tweeted that all lines affected by Thursday’s heavy rain have now reopened, and services are able to run again.

Road closures were also reported in Kingston, south-west London, where a Twitter user posted pictures of flooding in different parts of the town, including the underpass at Richmond Road near the railway station which was immersed in water.

Another video shared on Twitter shows motorists struggling to get through flooded areas of London Road in Glasgow, with cars half-submerged in water.

The Met Office has issued weather warnings as downpours are likely to persist overnight, which could bring localised flooding and travel disruption.

A yellow warning for heavy rain has been placed over north-east England which is expected to last until 10am on Friday, while thunderstorms are forecast in parts of southern England and South Wales between 11am and 8pm.

Meteorologist Emma Salter said: ‘There will be quite heavy, isolated downpours and there is potential for flash flooding.

Commenting on the weekend ahead, Ms Salter said: ‘We’ll see an improving picture throughout the weekend but it will be quite chilly, as far as August is concerned, particularly in the north. Sunday will be dry with a good spell of sunshine.’

This Bank Holiday, Ms Salter said top temperatures could reach 19C in London while parts of Scotland will be chillier with highs of 11C, well below the average of 16C usually seen in the country.

She pointed to last year’s late August Bank Holiday Monday which was the hottest on record, with 33.2C recorded at Heathrow.

‘We could see some places getting the coldest maximum temperatures on record this Bank Holiday Monday,’ Ms Salter said.

‘The lowest maximum temperature recorded was 10.1C in the Shetland Islands – if anywhere gets lower than that it’s in the running to be the coldest on record.’

Storm Francis saw vicious gusts hit The Needles near the Isle of Wight on Tuesday. This is just short of the August record for the UK which was 87mph recorded in 1996.

Meanwhile, Storm Ellen’s gales brought the highest ever share of wind power on the electricity system as wind turbines supplied 59.1 per cent of Britain’s power on Saturday at 1am, according to National Grid ESO.

A spokesman said ‘it means that wind was contributing more than it has ever done to the electricity system at just shy of 60 per cent’.

The impact of Storm Francis saw gusts of 75mph at Lake Vyrnwy in Powys, Wales, on Tuesday, equalling the Welsh August gust record at Milford Haven in August 1979.

The wettest place on Tuesday was Bethesda in north Wales where 101mm of rain was recorded. Meanwhile, the fire service in Northern Ireland said 37 people were rescued from flood water.

Elderly residents had to be rescued from the County Down coastal resort town of Newcastle after a river burst its banks, and in Draperstown, Co Londonderry, rescuers had to save nine people from inside a house, along with four outside who were trying to help. 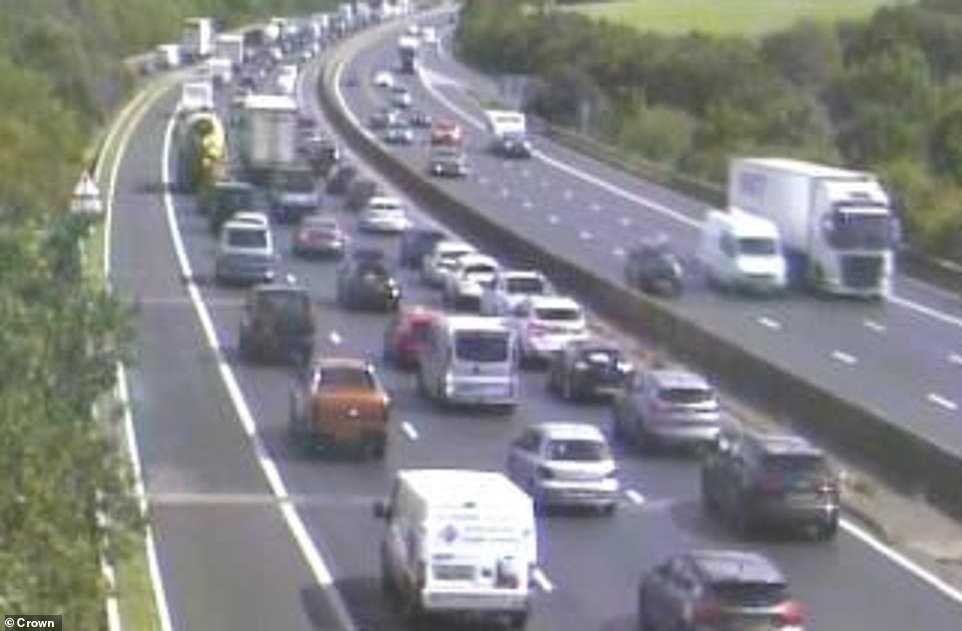 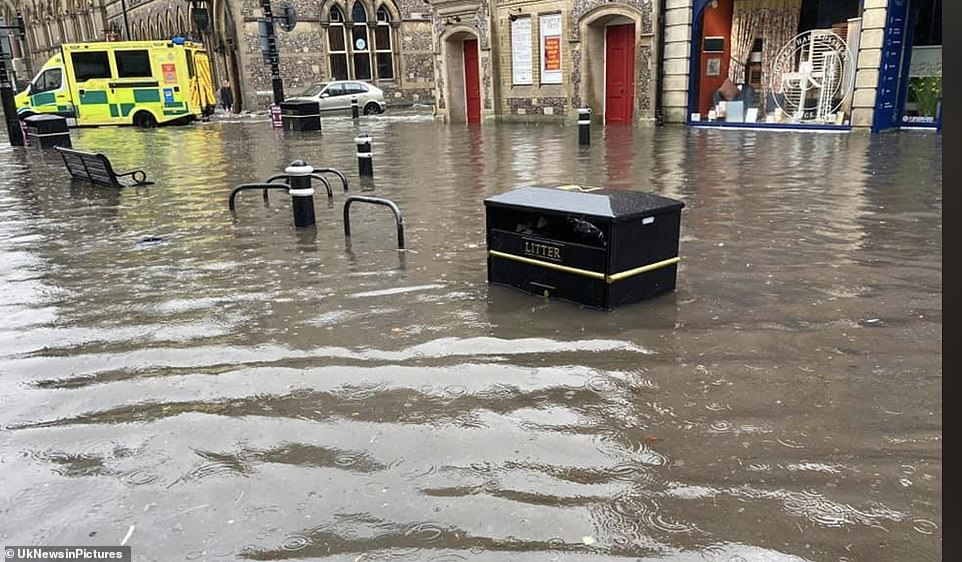 Hampshire has seen flash flooding after heavy rain swept through the area including Alresford and Winchester, pictured yesterday 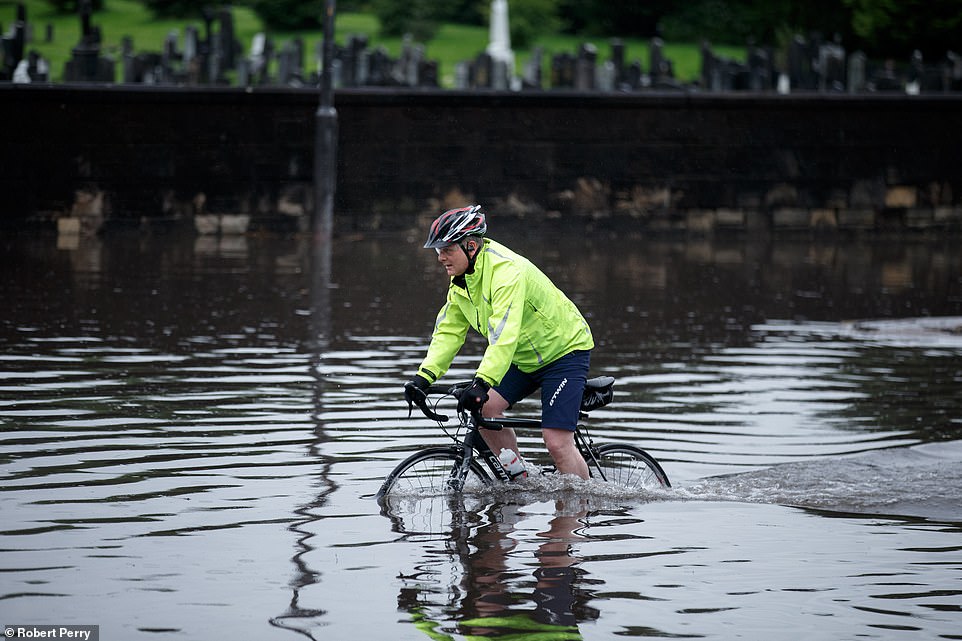 A cyclist wades through flood waters on London Road in Glasgow yesterday, which was lashed by heavy rain through much of the afternoon 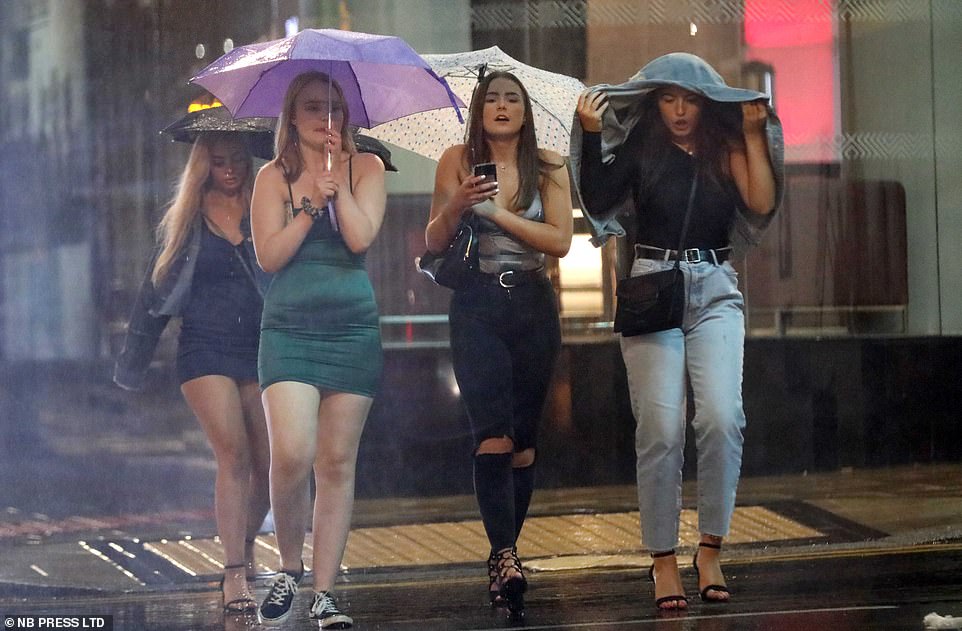 A small group of revellers brave the rain during a night out in Leeds last night. Flooding was seen across the country 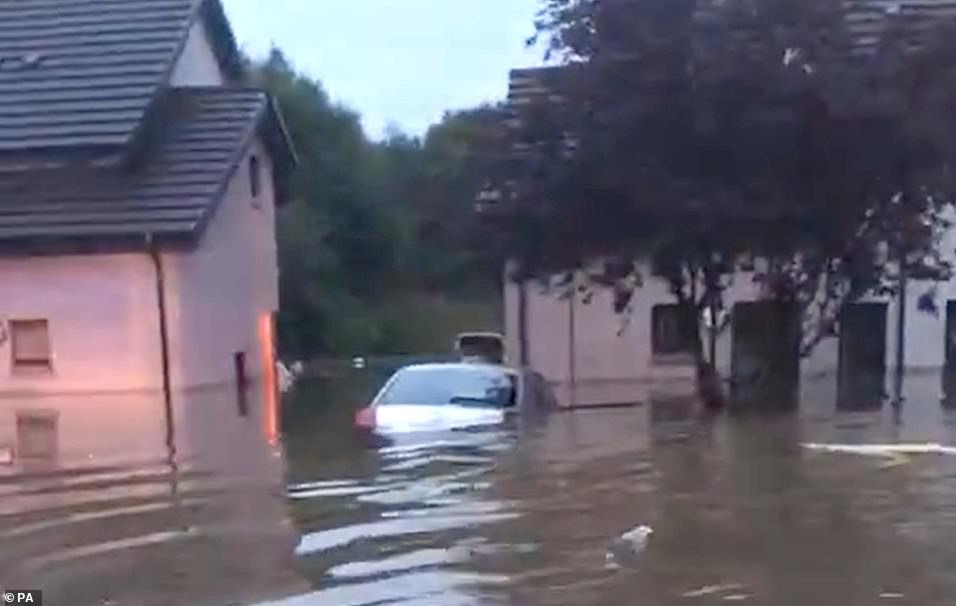 Flooding in Pyothall Court in Broxburn, West Lothian, on August 27. The Met Office expects parts of the country to see up to 40mm worth of rain in just three hours – compared to last year’s monthly total of 76.7mm 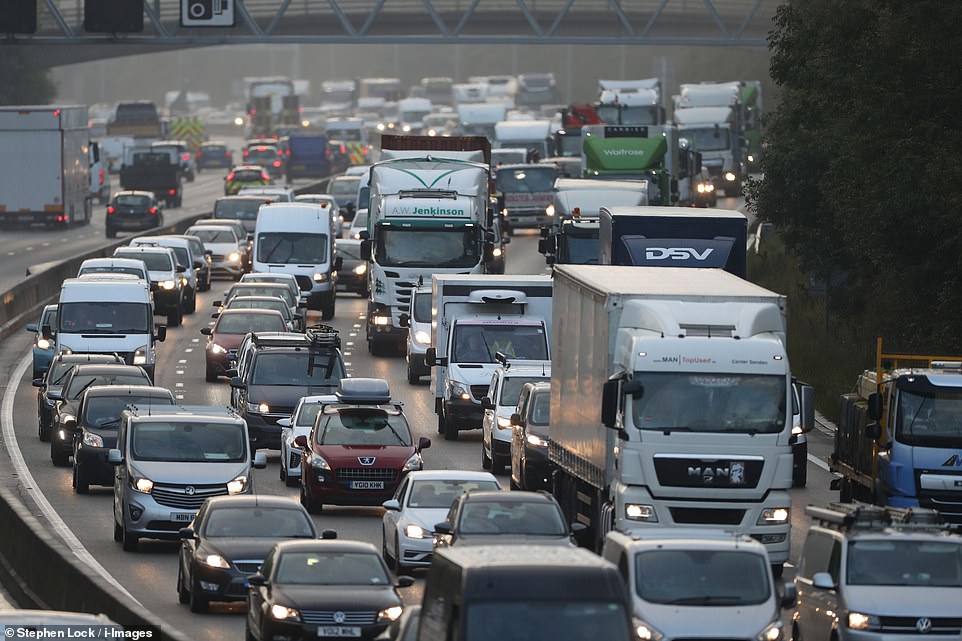 Motorists will be hoping the weather holds this morning as they hit the roads for staycations over the long weekend, with the M25 in Kent already rammed with traffic by 6am 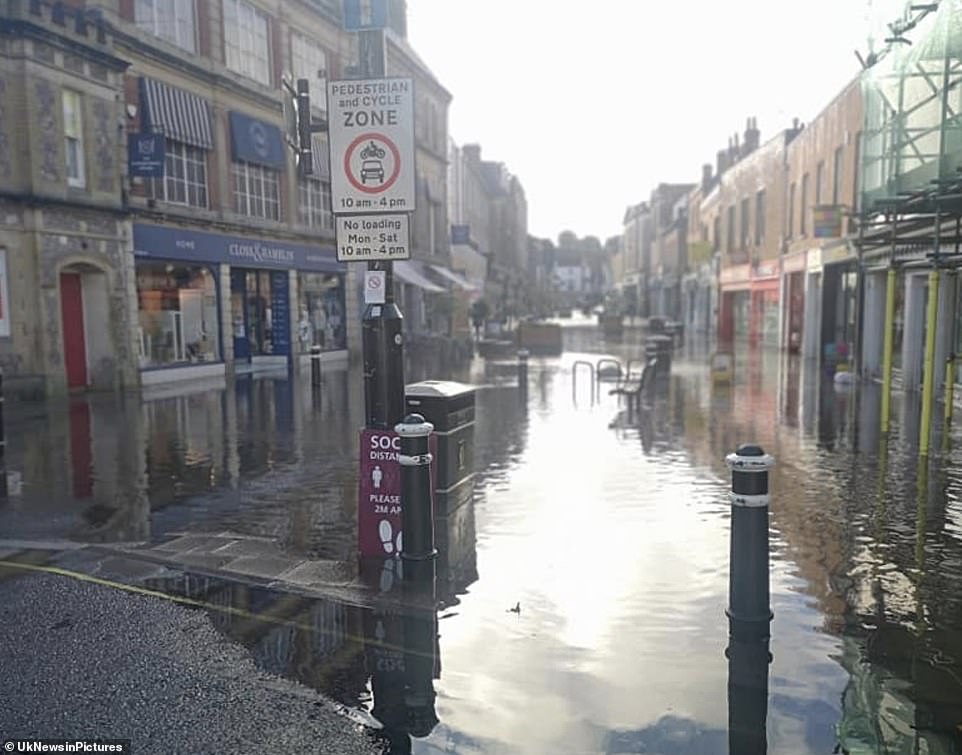 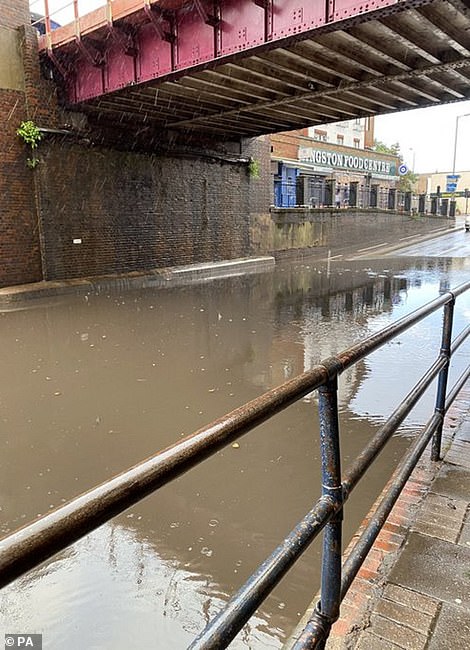 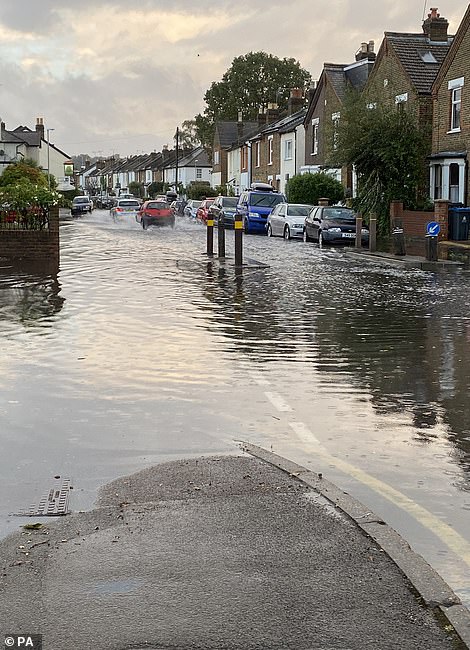 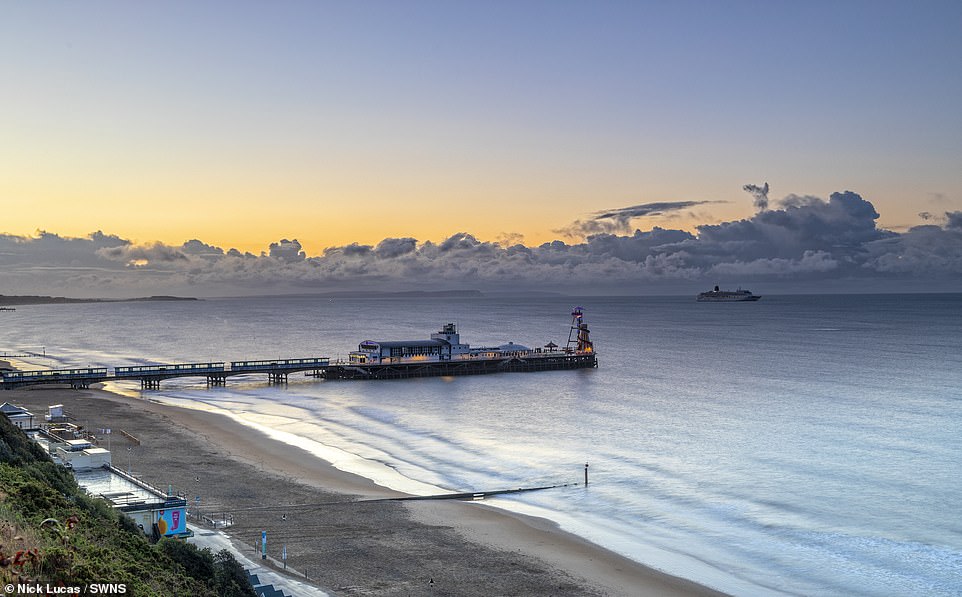 A pleasant, still morning at Bournemouth beach today. The peaceful scene stands in stark contrast to the crowds seen during the heatwave