Britain is still the teen motherhood capital of Europe

Britain has kept its place as the teenage motherhood capital of Europe despite plunging rates of pregnancy among young women.

The country’s unenviable reputation for teenage births has remained unchallenged even after historic falls in pregnancy over the past decade.

While on the Continent many teenage pregnancies end in abortion, in Britain girls from poorer homes tend to keep their babies.

A round-up of numbers of women who had their first child before 20 showed that more than 16,000 British girls gave birth in 2015, a third more than those in the second highest western European nation, France.

As a share of all births, the percentage of first births to teen mothers was higher in Britain than in any western European country, with five former Communist states showing higher levels.

The data, from the EU’s Eurostat agency, casts doubt on the success of Government campaigns such as Tony Blair’s Teenage Pregnancy Strategy.

Teen pregnancy rates in England and Wales have halved since 2008, over years in which teenage habits have been changed by social media, long-term contraception and the morning-after pill.

Births have also fallen steeply, as middle-class girls opt for university and careers. 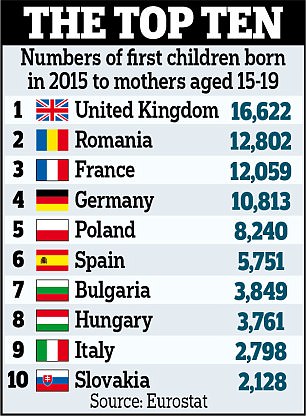 The share of all first births for under-20s was 5.4 per cent in England, the same level as Lithuania, and below Hungary, Latvia, Romania and Bulgaria.

However, abortions are more common in the rest of Europe and working-class British girls are more likely to keep their babies.

Patricia Morgan, author of The State And The Family, said: ‘We have heard for decades that more sex education would put an end to unwanted teenage pregnancy.

‘From these figures, it seems that sex education is not as successful as people think.’