The UK has missed three chances to participate in an EU scheme to buy huge quantities of personal protective equipment (PPE).

The EU has ordered €1.5billion (£1.3billion) worth of protective masks, gowns and gloves for doctors and nurses – but Britain did not take part in talks about the purchases.

Some 25 European countries and eight companies are involved in the joint PPE procurement scheme and the first deliveries could be received within days, The Guardian reported.

A spokesman for the commission said the joint scheme has led to offers of protective gear in excess of the amount requested.

However, the UK will miss out on the PPE because it did not take part in any of the three rounds of bulk-buying which were first launched by the EU in February.

The Government has previously said it was unable to join the EU’s procurement schemes as it had not received an email of invitation.

A medical professional in PPE, including gloves, eye protection and a face mask as a precautionary measure against Covid-19, carries a tank as a patient is taken from an ambulance into St Thomas’ Hospital in north London

But Whitehall officials reportedly only realised after all three rounds had been put out to tender that they had not received invitations to join the Joint Procurement Agreement steering committee where the orders are organised.

After telling the EU commission that the invitation emails were being sent to an outdated address the UK finally participated in its first meeting on joint PPE procurement on March 19.

However, British officials did not follow up that meeting and did not attend on March 25 when participating countries were invited to outline their requirements for future purchases by the next day.

The revelations comes as anger grows over PPE shortages in Britain. 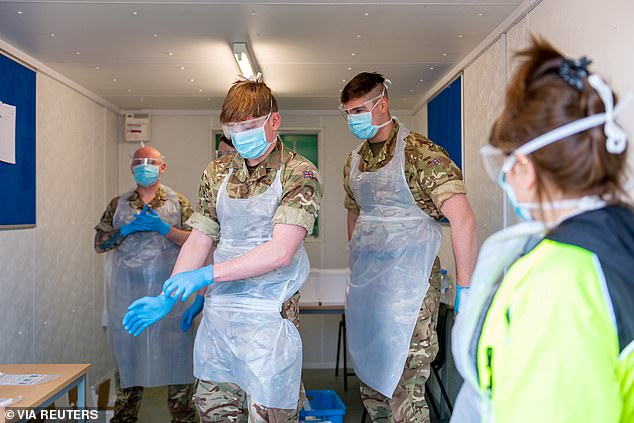 Scottish soldiers prepare to test the NHS workers for coronavirus in Glasgow, April 9

Yesterday foreign secretary Dominic Raab acknowledged that PPE shortages – rather than distribution issues only – was an issue and admitted supplies were running low because of ‘a competitive market out there’.

A spokesman for the Department of Health said: ‘We are working round the clock with industry, the NHS, social care providers and the army to ensure the supply of PPE over the coming weeks and months and will give our NHS and the social care sector everything they need to tackle this pandemic – including working with countries around the globe.’

They added that the department ‘will consider participating in future EU joint procurement schemes on the basis of public health requirements at the time.’