Britain remains the number one destination in Europe for foreign investment, a new report says.

Despite warnings that a Leave vote would deter foreign investors, the report estimates a record number of jobs were created last year as a result of new money pouring in.

The annual Global Trends report by tech giant IBM says London remains the number one city globally for direct foreign investment (FDI). Manchester, Liverpool and Birmingham also saw growth and are in the top 20 globally, according to the report.

Dr Liam Fox, the International Trade Secretary, said the figures proved the economy had remained competitive and would remain so whatever the outcome of Brexit talks.

He said: ‘Contrary to the negative reports about the UK’s trading future, this report shows that we remain the leading destination for FDI in Europe.’

The report estimates 51,000 jobs were created last year across 1,229 new FDI projects – the highest figure since IBM began compiling the reports in 2002.

In a ranking of cities London had the highest number of new projects – remaining more popular than Paris, in second place, for foreign investors. The Department for International Trade estimates foreign investors are holding a record £1.2trillion of assets in the UK in relation to FDI projects.

The findings came ahead of the latest round of talks between Brexit Secretary Dominic Raab and the EU chief negotiator Michel Barnier.

Mr Raab flew into Brussels last night for up to five hours of talks today on differences over the divorce deal such as the Irish border and the future relationship.

Claims the bloc is set to cave in after months of grandstanding in order to reach a deal were played down by both sides yesterday.

It was after Mr Barnier said on Wednesday the bloc could offer the UK ‘a partnership such as there has never has been’, which led to a rally in the value of the pound. 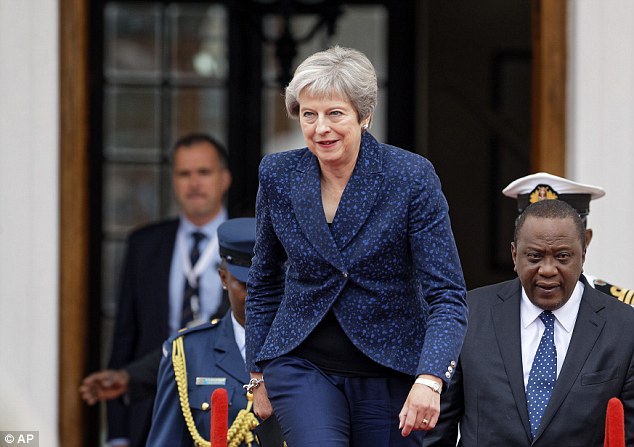 Yesterday Mrs May was questioned about the Chequers plan after stinging criticism by her former co-chief of staff, Nick Timothy, who said it would leave Britain in ‘the worst of both worlds’

He repeated the comments yesterday in an interview with German broadcaster Deutschlandfunk, saying the EU was ready to create a ‘strong and unprecedented partnership’.

However, he added that ‘no deal’ preparations were necessary and that an agreement on the future relationship could only be reached if the UK’s proposals do not undermine the single market.

Theresa May’s white paper on the future relationship, thrashed out at Chequers, is seen by Brussels as a threat to the integrity of the single market.

This is because it suggests Britain diverge from the bloc on services and freedom of movement while still aligning on goods.

Yesterday Mrs May was questioned about the Chequers plan after stinging criticism by her former co-chief of staff, Nick Timothy, who said it would leave Britain in ‘the worst of both worlds’.

Speaking in Kenya yesterday, where she was visiting president Uhuru Kenyatta during her African tour to drum up trade, Mrs May denied Britain would become a ‘vassal state’ that follows EU rules without helping to set them.

Calling for the plan to be accepted, she said: ‘Chequers delivers on the Brexit vote … I believe our proposals are not just good for the UK, but they are good for the EU as well.’