‘We have never been naive about Iran and its nuclear intentions,’ a British government spokesman said in a statement. Pictured: Theresa May and Netanyahu meeting in London last year

Britain has never been ‘naive’ about Iran’s nuclear programme, a spokesman for the government said tonight, after Israeli Prime Minister Benjamin Netanyahu accused the Islamic republic of lying to the world about its ambitions.

Netanyahu stepped up pressure on the United States to pull out of a 2015 nuclear deal with Iran, holding a primetime address on Israeli TV to present what he called evidence of a secret Iranian nuclear weapons programme.

‘We have never been naive about Iran and its nuclear intentions. That is why the IAEA inspection regime agreed as part of the Iran nuclear deal is one of the most extensive and robust in the history of international nuclear accords,’ a British government spokesman said in a statement.

‘It remains a vitally important way of independently verifying that Iran is adhering to the deal and that Iran’s nuclear programme is exclusively peaceful.’

Intelligence experts and diplomats said Netanyahu did not seem to have presented a ‘smoking gun’ showing that Iran had violated the agreement, although he may have helped make a case on behalf of hawks in the U.S. administration who want to scrap it. 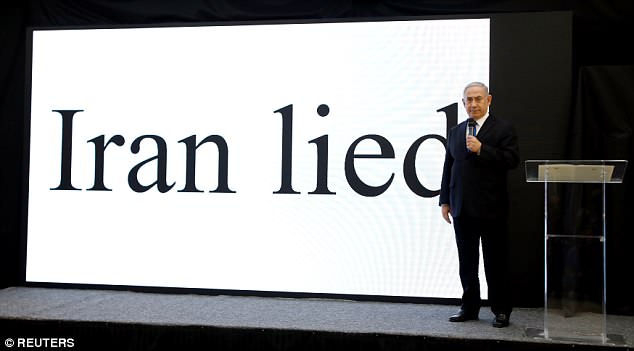 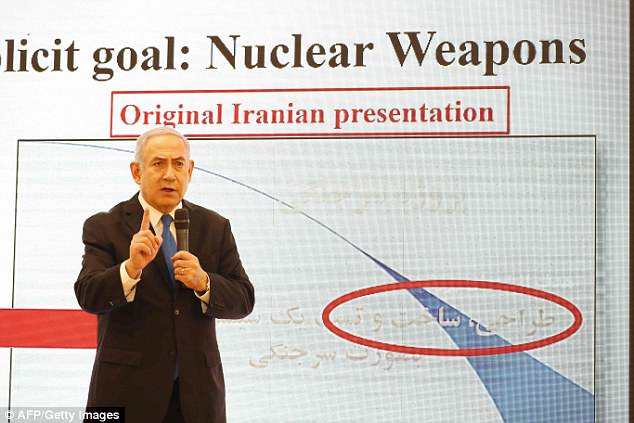 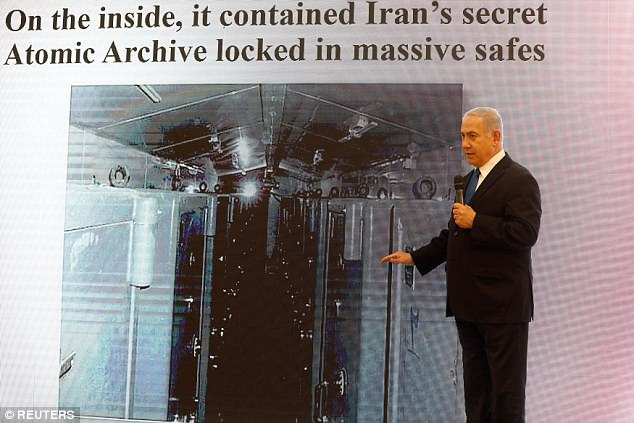 Israeli Prime Minister Benjamin Netanyahu says that his intelligence services have obtained documents proving that Iran maintained a secret nuclear program in violation of a landmark agreement Tehran reached with the West. Netanyahu points to a slide which is purported to show ‘massive safes’ where Iran’s ‘secret archive’ were stored

Most of the purported evidence Netanyahu unveiled dated to the period before the 2015 accord was signed, although he said Iran had also kept important files on nuclear technology since then, and continued adding to its ‘nuclear weapons knowledge’.

Tehran dismissed Netanyahu as ‘the boy who cried wolf’, and called his presentation propaganda.

President Donald Trump has threatened to pull the United States out of the international deal unless it is renegotiated by May 12. After Netanyahu spoke, Trump repeated his criticism of the deal, suggesting he backed the Israeli leader’s remarks.

‘Iran’s leaders repeatedly deny ever pursuing nuclear weapons,’ Netanyahu said at Israel’s Defence Ministry, standing in front of stacks of files representing what he described as a vault full of Iranian nuclear documents obtained weeks before.

‘Tonight I’m here to tell you one thing: Iran lied.’

‘Iran lied about never having a nuclear weapons programme,’ he said. ‘One hundred thousand secret files prove it did. Second, even after the deal, Iran continued to preserve and expand its nuclear weapons knowledge for future use.’

Although the presentation was live on Israeli television, Netanyahu made clear that his audience was abroad: he delivered most of his speech in English, before switching to Hebrew.

Netanyahu said he had shared the intelligence with the United States and would dispatch envoys to France and Germany to present it. He also spoke by phone to Russian President Vladimir Putin.

Tehran has denied ever seeking nuclear weapons and accuses its arch-foe Israel of stirring up world suspicions against it. 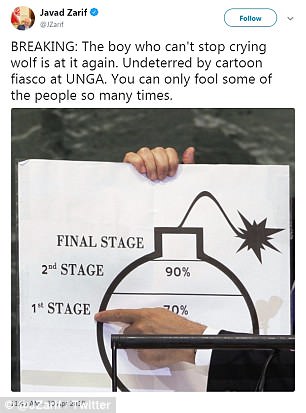 Before Netanyahu’s speech, Iran’s foreign minister, Mohammad Javad Zarif, said the Israeli leader was ‘the boy who can’t stop crying wolf [and is] at it again’

A senior U.S. official said Netanyahu gave new US Secretary of State Mike Pompeo a heads-up about the presentation he would give while on a visit to Tel Aviv at the weekend.

‘We were made aware of his plans,’ the official said.

Under the 2015 nuclear deal struck by Iran and six major powers – Britain, China, France, Germany, Russia and the United States – Tehran agreed to limit its nuclear program in return for relief from U.S. and other economic sanctions.

Trump gave Britain, France and Germany a May 12 deadline to fix what he views as the deal’s flaws – its failure to address Iran’s ballistic missile program, the terms by which inspectors visit suspect Iranian sites, and ‘sunset’ clauses under which some of its terms expire – or he will re-impose U.S. sanctions.

Much of what Netanyahu presented is unlikely to surprise world powers, which have long concluded that Iran was pursuing atomic weapons before the agreement was signed in 2015: that is in part why they imposed sanctions in the first place.

The French ambassador to Washington, Gerard Araud, tweeted that information about past Iranian nuclear activity was in fact an argument in favour of the nuclear deal, not against it.

A German government spokesman said it was vital to keep the independent inspections provided for under the deal.

Washington’s European allies say Tehran has generally abided by the terms of the deal since then, and have urged Trump not to scrap it. Some independent analysts and diplomats said Netanyahu appeared to be presenting old evidence.

Eran Etzion, a former deputy Israeli national security adviser who now heads the Israeli-European think-tank Forum of Strategic Dialogue, said on Twitter: ‘No ‘smoking gun’ was revealed this evening, nor was it proven that Iran is today developing nuclear weaponry or violating the (nuclear deal) in any other way.’ 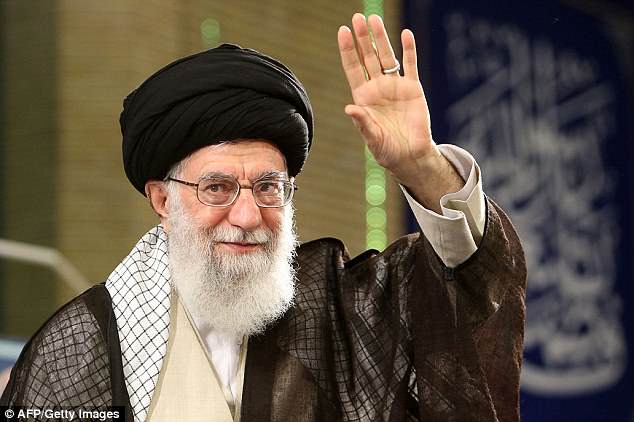 Supreme leader Ayatollah Ali Khamenei said on Monday that Iran is keen to develop ties with the rest of the world, which is ‘not merely’ the United States and European countries

A senior European diplomat told Reuters: ‘We knew all of this and what especially stands out is that Netanyahu doesn’t speak of any recorded violations’ of the deal itself.

Speaking after Netanyahu’s presentation, Trump told a White House news conference the nuclear deal was ‘a horrible agreement for the United States’. He said it would let Tehran develop nuclear arms after seven years and had ‘proven right what Israel has done today’ with Netanyahu’s disclosures.

However, Washington itself has concluded that Iran has not violated the deal’s terms. Two U.S. intelligence officials who have monitored Iran’s nuclear weapons program for years said nothing in Netanyahu’s remarks appeared to contradict that view.

‘We have seen no new and credible evidence that Iran is violating the agreement, whether in the Prime Minister’s remarks today or from other sources,’ said one of the officials, both of whom spoke on the condition of anonymity.

Abbas Araqchi, a senior Iranian foreign ministry official, was quoted by Iran’s Tasnim news agency as calling Netanyahu’s presentation ‘a childish and ridiculous game’ with the goal of influencing Trump’s decision ahead of the May 12 deadline.

Israel is widely believed to be the only nuclear-armed state in the Middle East, though it neither confirms nor denies possessing atomic weapons.