Millions of Brits all over the country took to their doorsteps to clap for NHS staff and key workers this evening, for the third Thursday in a row amid the coronavirus outbreak.

People all over the country showed their appreciation for key workers continuing to work during the outbreak and lockdown.

For the past two weeks, NHS workers have been the recipients of the cheers and claps from the nation.

But last week the event, organised by the Clap For Our Carers campaign, was expanded to include all key workers, such as supermarket staff, the emergency services and teachers who are continuing to work.

It comes as an urgent new appeal was launched tonight in an attempt to raise millions of pounds to support NHS nurses, doctors, staff and volunteers.

NHS Charities Together hopes the #OneMillionClaps campaign will raise at least £5million. 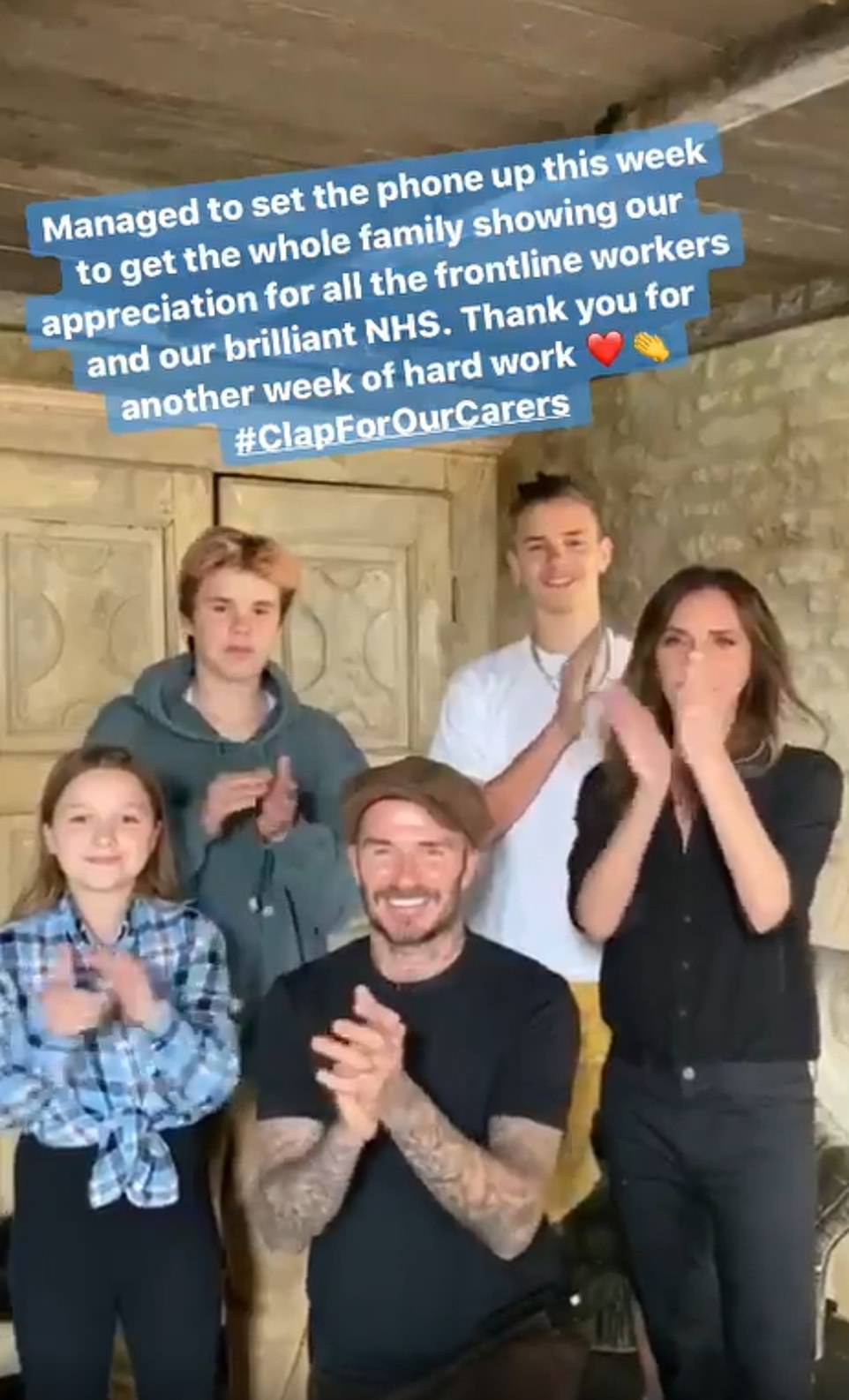 The Beckhams join in with the clap for carers event this evening, as millions of Brits thanks the NHS and key workers 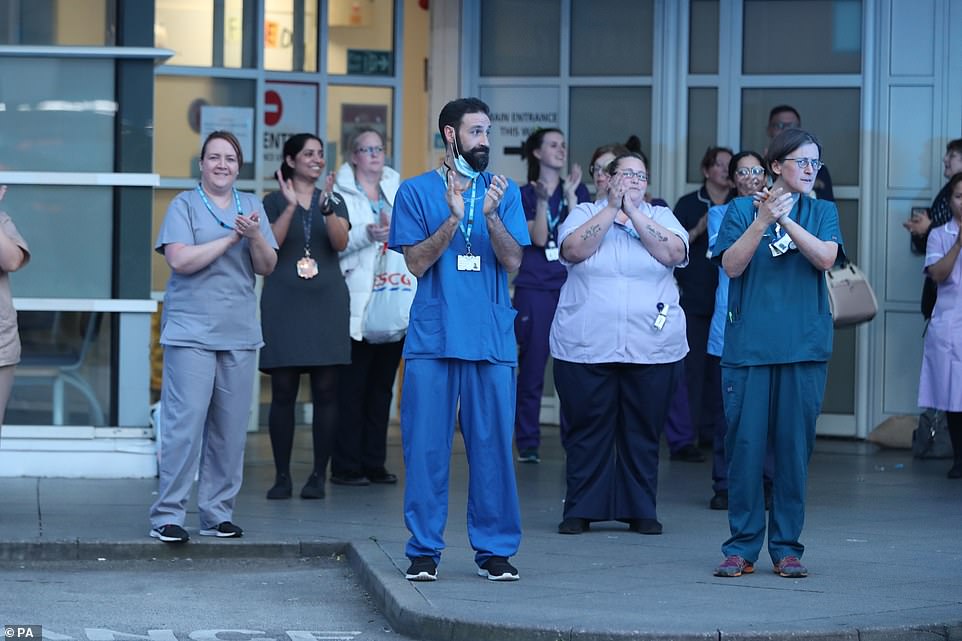 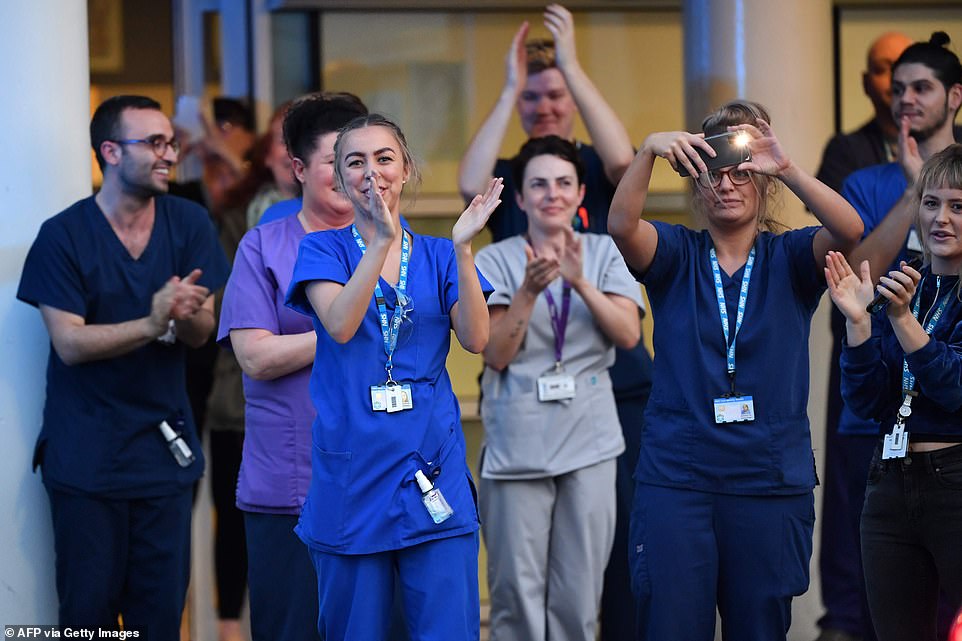 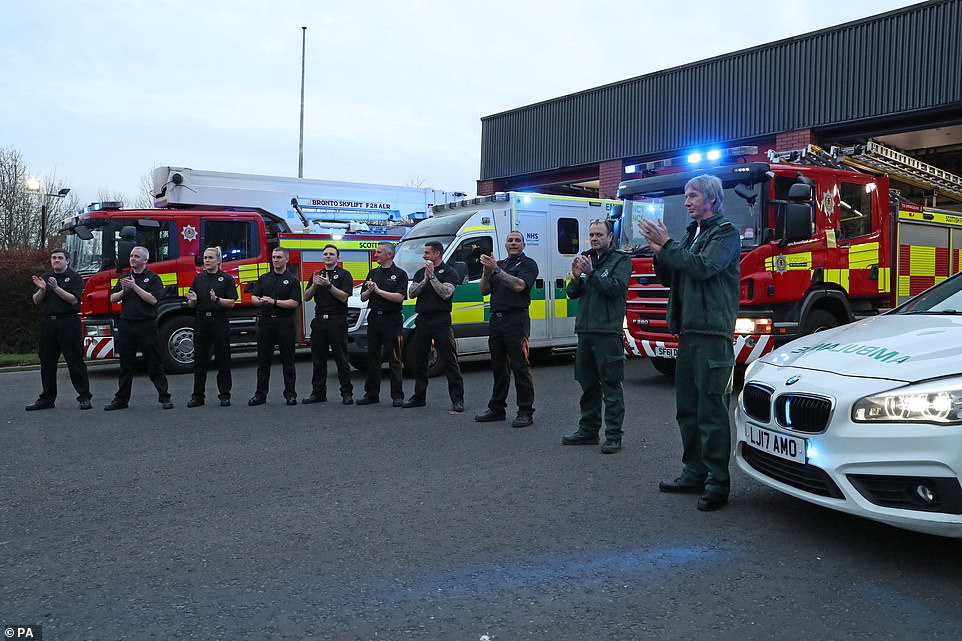 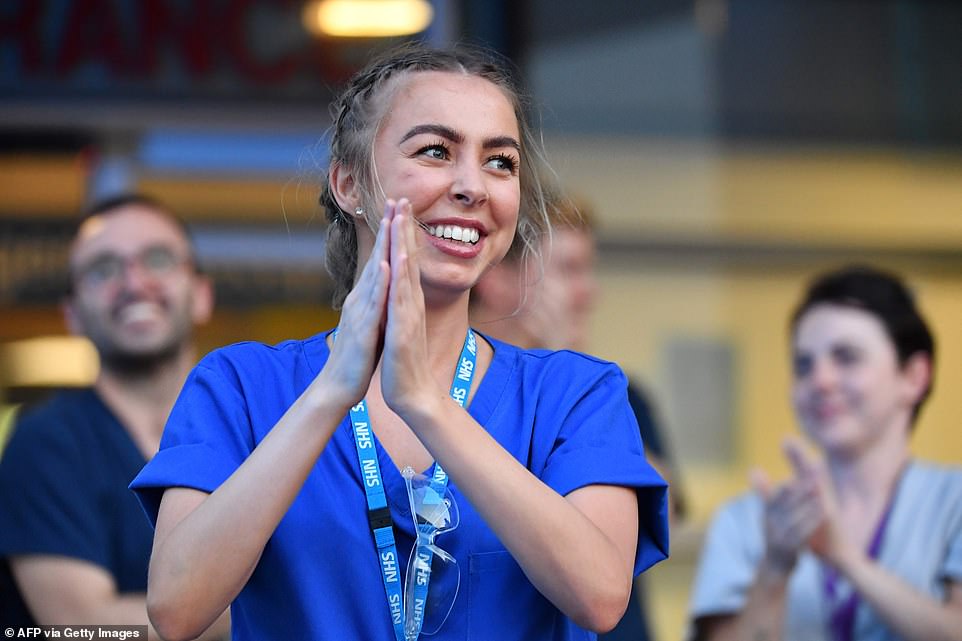 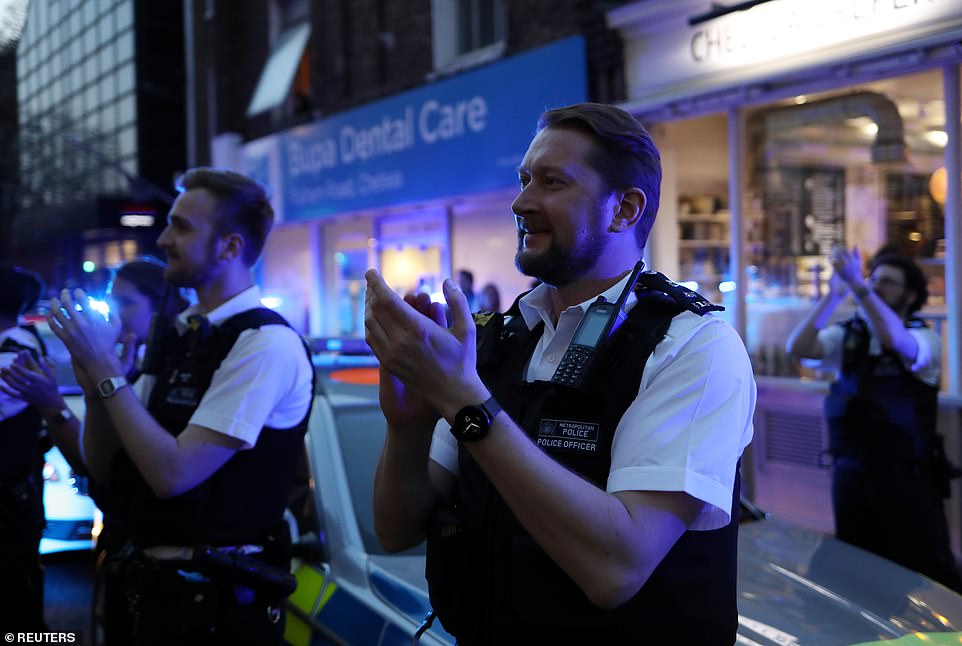 Police officers join in the clapping for carers event this evening, with millions of Brits showing their appreciation for NHS staff 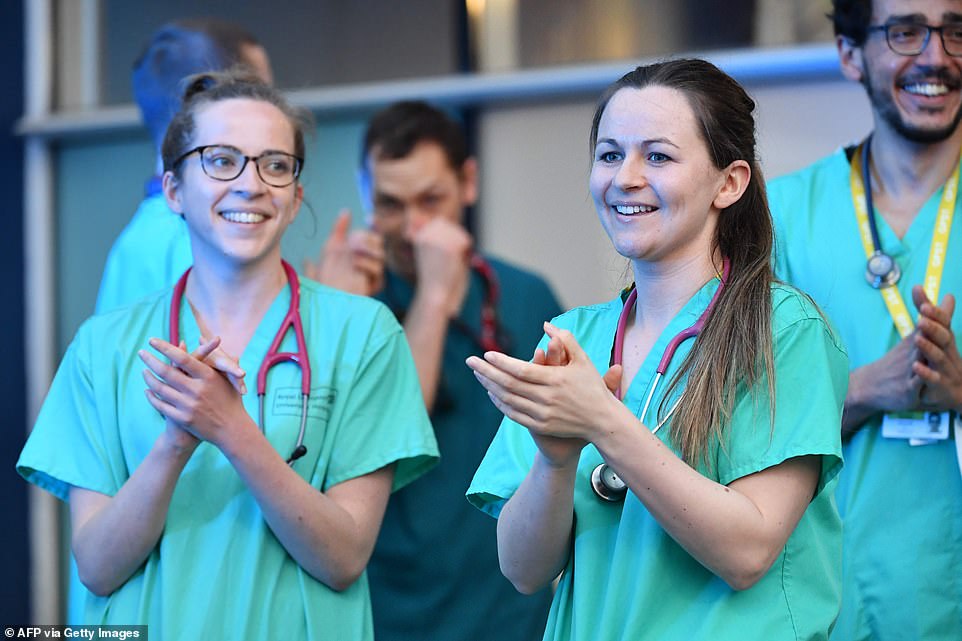 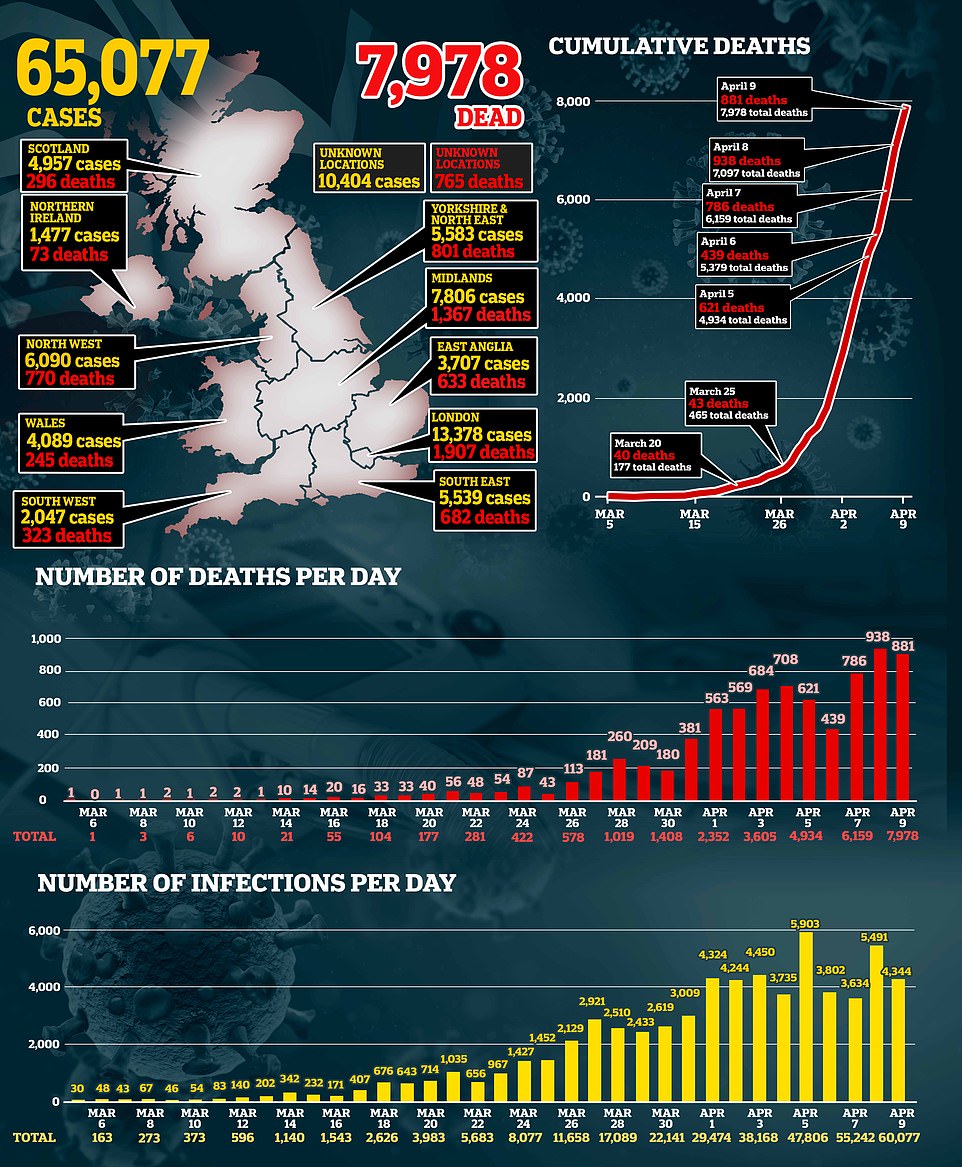 The appeal will be promoted with a short film voiced by David Walliams and featuring NHS staff and people from across the UK.

In Manchester people prepared to clap for the NHS by adorning their gardens with special health care scarecrows.

The scarecrows are out in Greenfield, Manchester as part of its annual scarecrow parade.

NHS Charities Together’s video features a re-recording of the Queen classic We Will Rock You with the new lyrics: ‘NHS, We Love You. We Say, We Say, Thank You.’

#OneMillionClaps is part of National COVID-19 URGENT APPEAL, which was launched two weeks ago by NHS Charities Together – the official umbrella organisation for NHS charities.

The appeal asks people to donate £5 by texting the word ‘CLAP’ followed by any messages of support to 70507.

Each £5 donation will be used to provide a range of supplies and support for NHS staff and volunteers- including food, travel, accommodation and counselling. 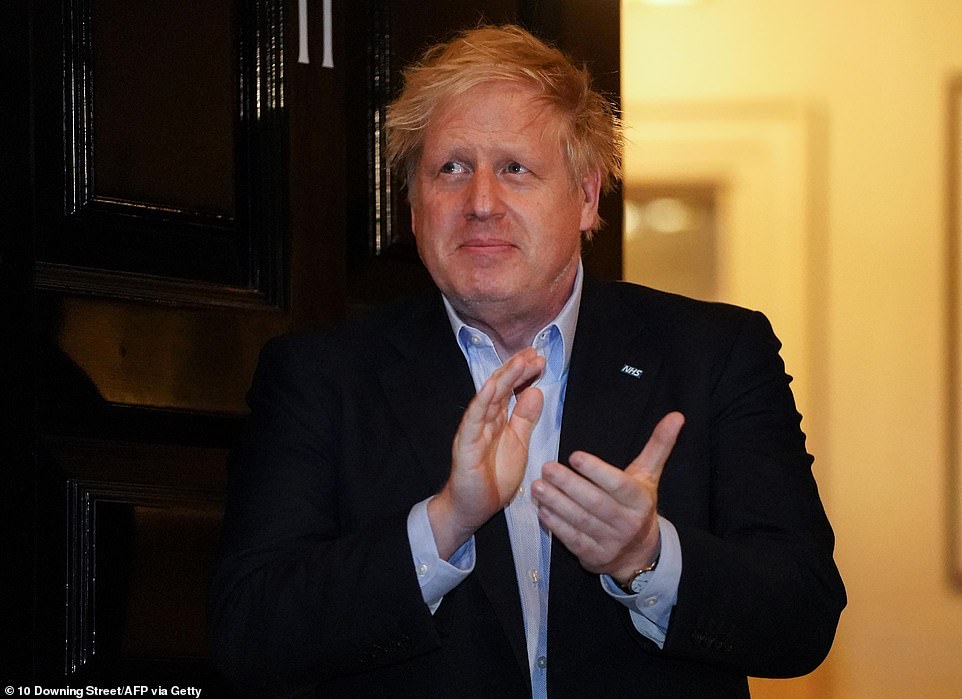 Boris Johnson stood on the steps of 10 Downing Street last Thursday to give his thanks to the NHS. It was the last time the PM has been seen in public since he was taken to hospital with coronavirus earlier this week 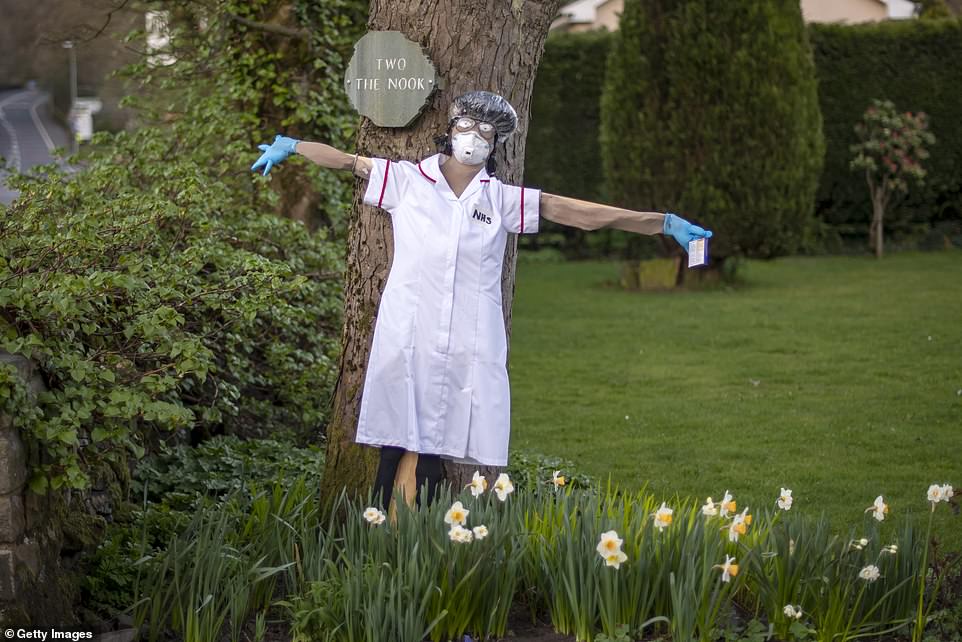 This NHS nurse scarecrow has been adorned with its own uniform, protective mask and gloves in Greenfield, Manchester today. 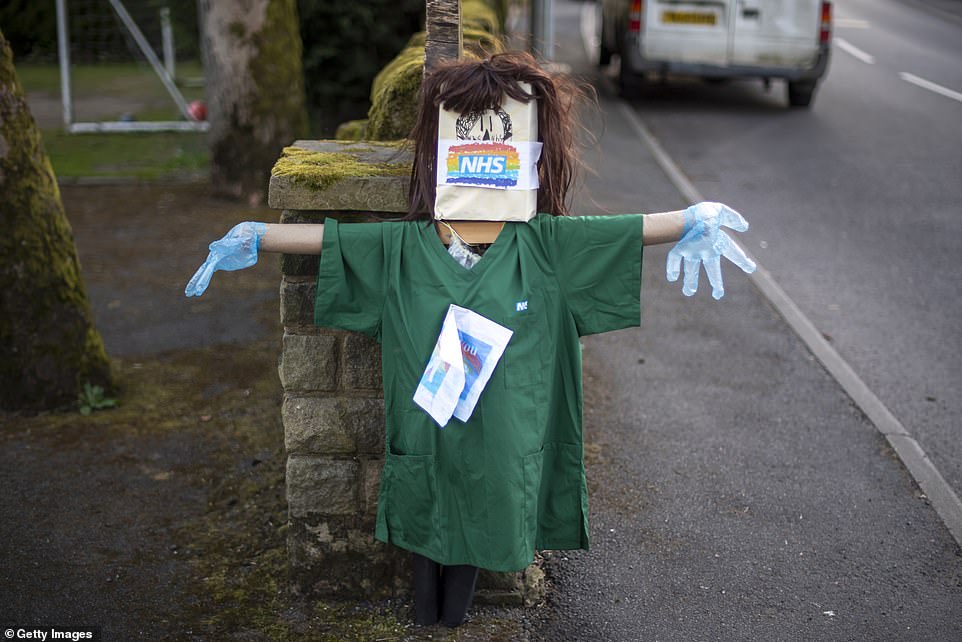 With Britain in its third week of lockdown, Greenfield residents couldn’t help but pay tribute to the hardworker NHS doctors and nurses during its annual scarecrow parade on Thursday 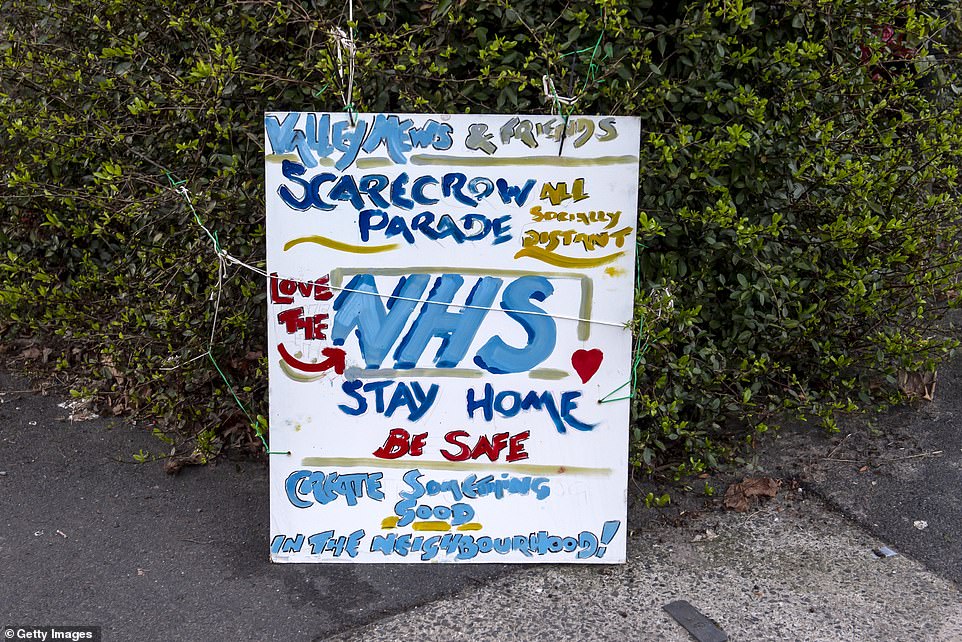 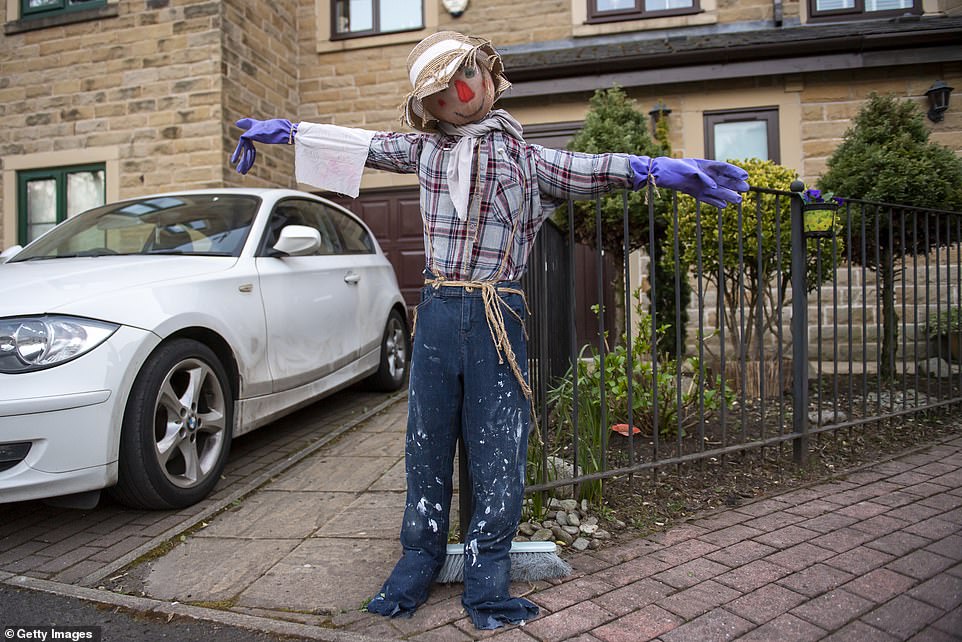 Not all of Greenfield’s scarecrows are inspired by the NHS, some participants have gone for a more traditional look today (Thursday)

Individual messages of support will be also forwarded to local NHS charities and sent to the donors’ local hospital.

The goal is to inspire at least a million people to donate £5 – meaning more than £5million will be raised for NHS staff in just one evening.

Ellie Orton, Chief Executive of NHS Charities Together said: ‘Every single penny raised for nurses, doctors and NHS staff in this way will go to help those health service workers who are working so hard and risking so much to help us.

‘Thousands of staff are risking their lives every day for us and many of them are now sick themselves or at breaking point.

‘I really hope #OneMillionClaps inspires those who can to give a donation that will make a real difference to the amazing staff and volunteers who are daily saving lives and battling against this horribly virus on our behalf.

‘If we can raise £5 million tonight, it will go a long way to providing them and their families with the support they so desperately need.’