Britain to enjoy temperatures of 59F this week

Sun’s out for half term! Britain to enjoy temperatures of 59F this week as chilly fog and patches of rain make way for sunshine

The country can expect patches of sunshine and mild temperatures as we draw into the school half term.

Despite the occasional patches of rain moving in a southeasterly direction, milder temperatures and westerly winds are set for the UK this week.

As the low cloud and patches of chilly fog that emerged yesterday clears, Britain can expect milder weather and highs of 50-54F (10-12C), with the highest temperatures expected to peak at 57-59F (14-15C) by the end of the week.

Earlier today people were spotted enjoying the unseasonal warmth while punting along the River Cam in Cambridge where temperatures managed to reach as high as 16C. 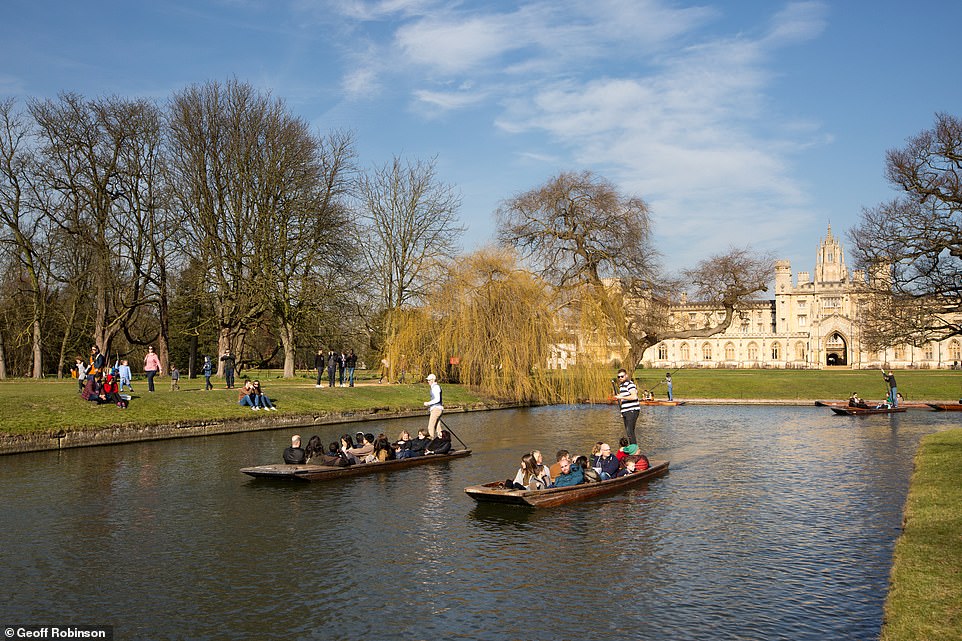 As spots of sunshine hit the UK, people were seen enjoying a day out punting in Cambridge where temperatures reached 16C 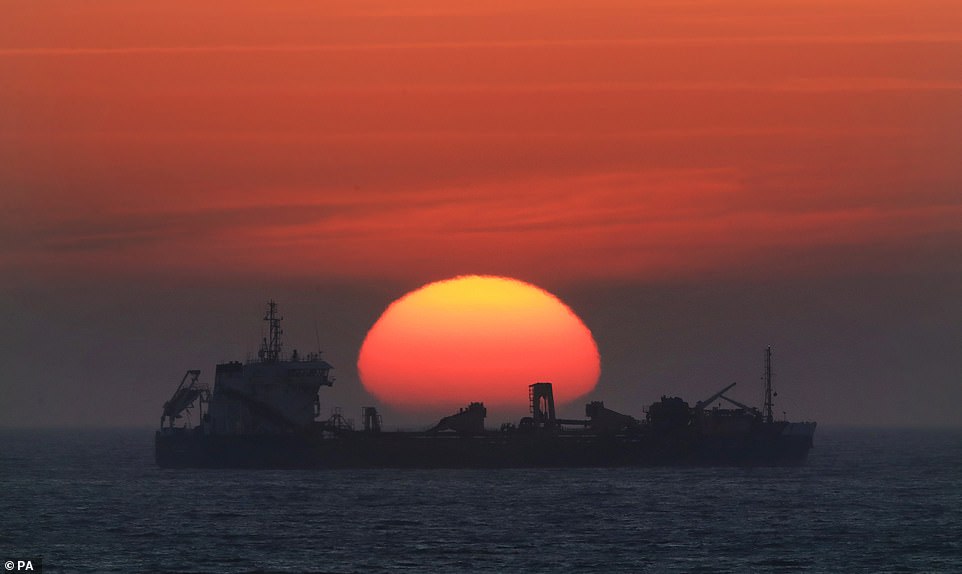 The sun is spotted rising  behind a ship on the North Sea just off the coast at Whitley Bay, North Tyneside, North East England 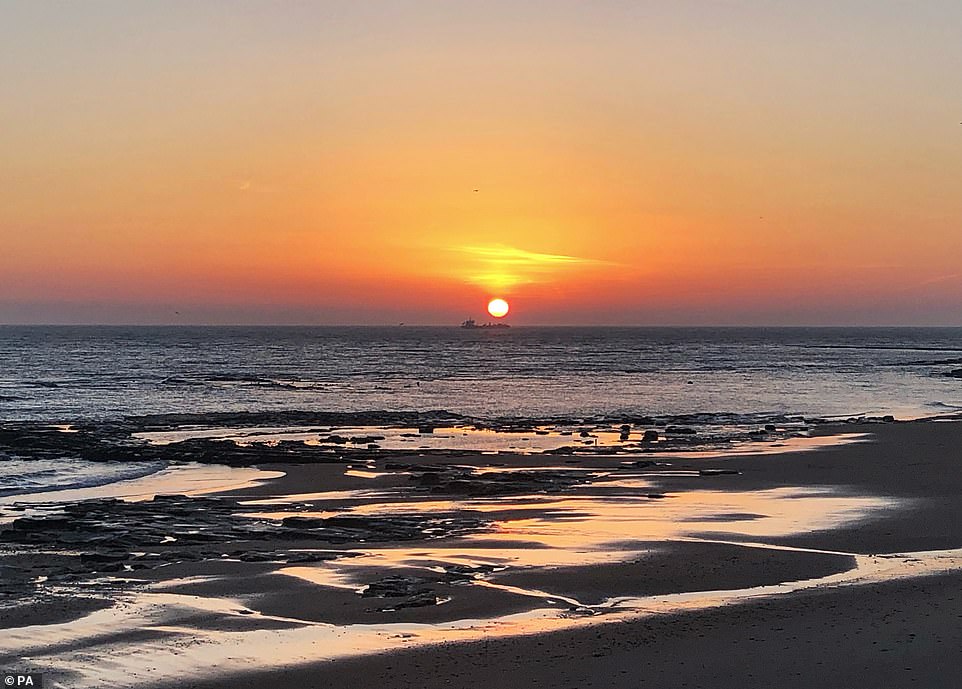 As the low cloud and patches of chilly fog that emerged yesterday clear, Britain can expect milder weather and highs of 50-54F (10-12C) 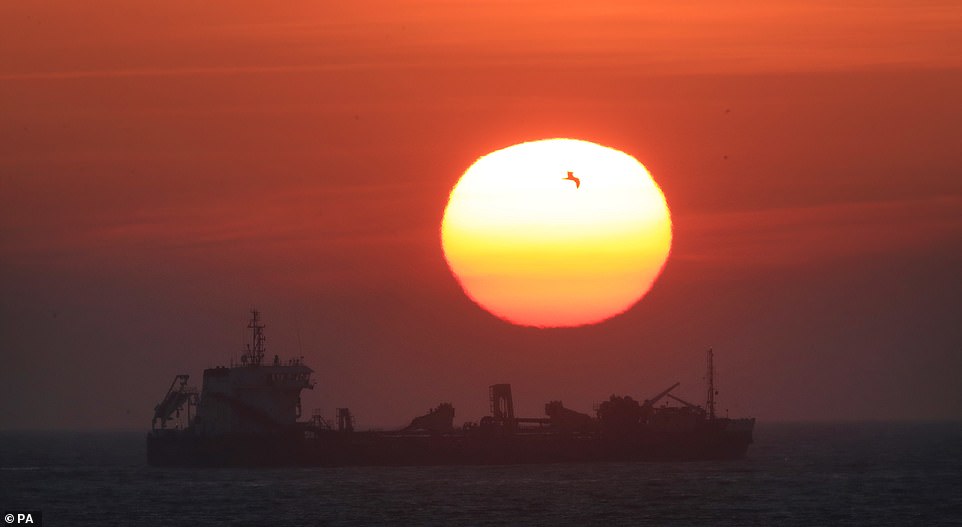 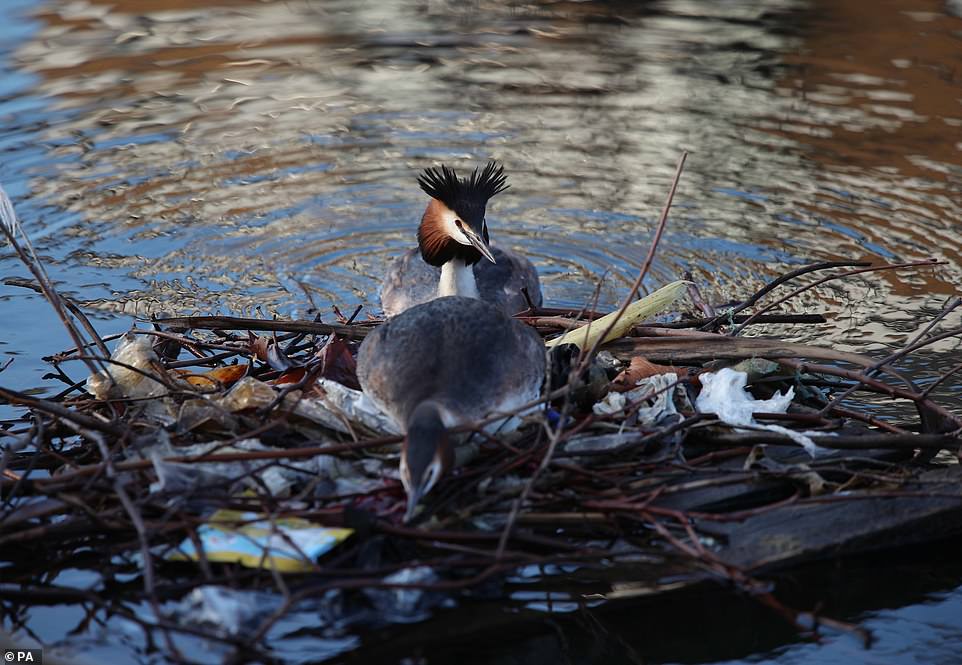 Two great crested grebes sit a nest partially built from discarded litter on the South Quay of the Isle of Dogs, east London 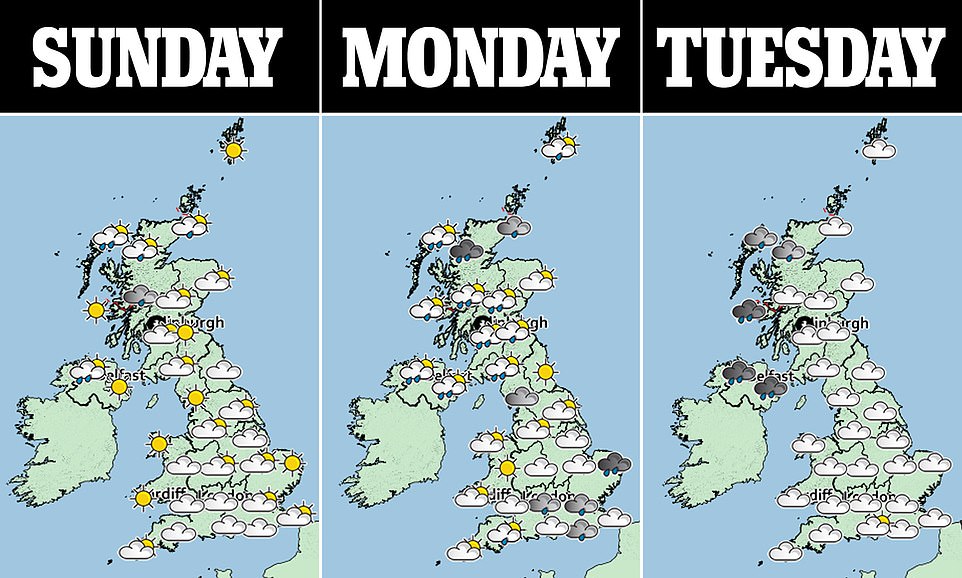 Today is expected to remain mostly dry, with a chance of blustery showers moving east from western Scotland and Northern Ireland.

As the night approaches, the patches of rain will move across East Anglia and southeast England.

Coming into Monday, the southeast will stay cloudy with blustery winds taking form in the northwest.

The forecast for the rest of the week is expected to remain mainly dry and bright in the southeast but unsettled and often windy in the northwest. 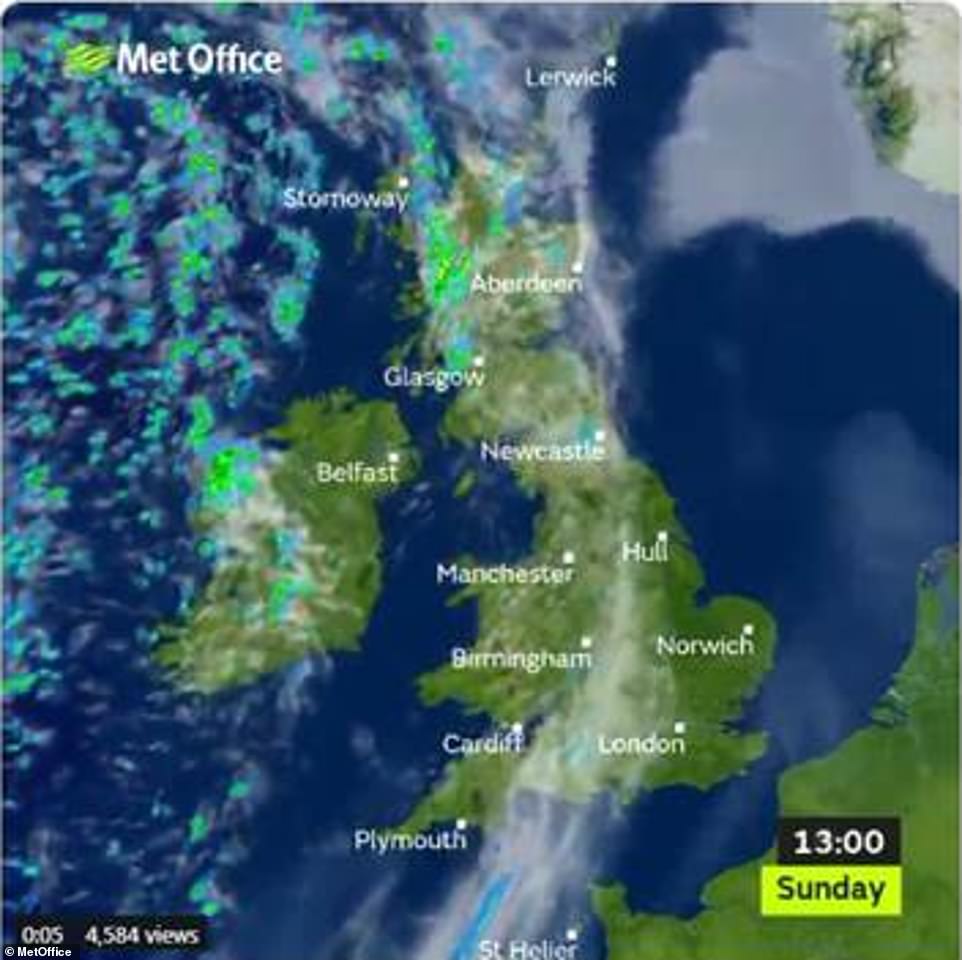 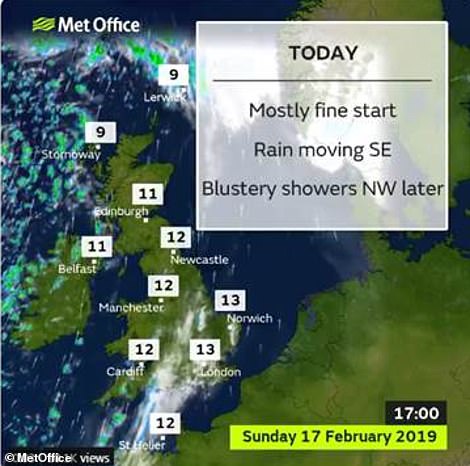 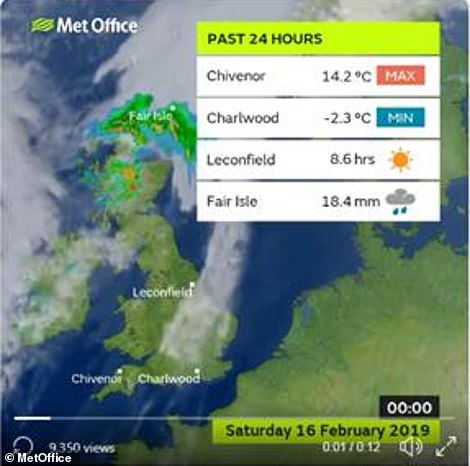 Today will begin with plenty of sunshine however increasing patchy rain will move southeast. The weather is expected to remain dry throughout the week 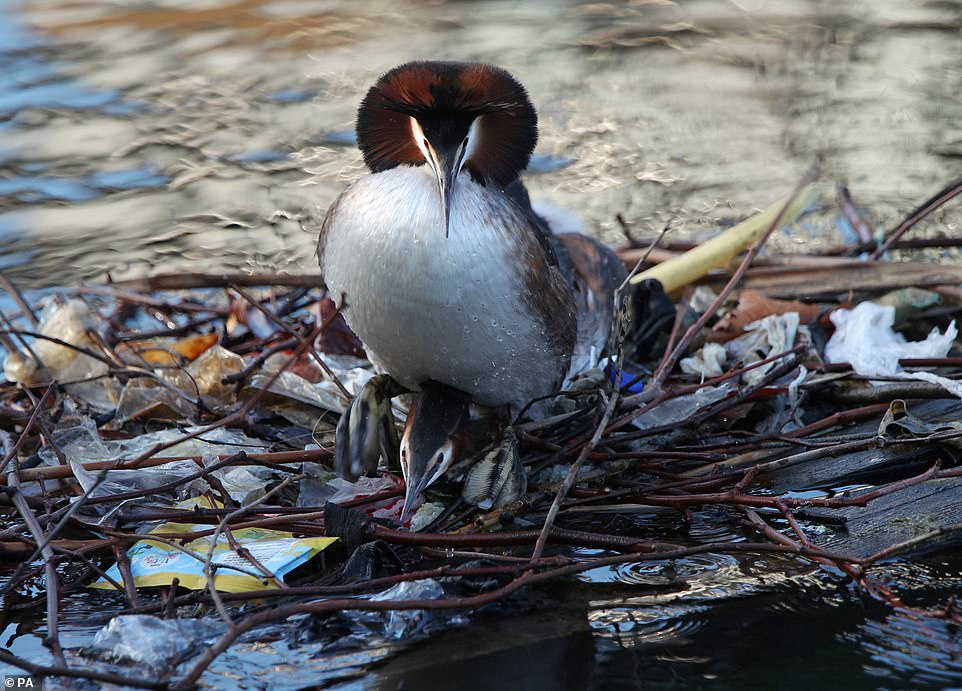 As the country sets itself up for patches of rain and sunshine, the pair of great crested grebe were pictured sitting on their nest today 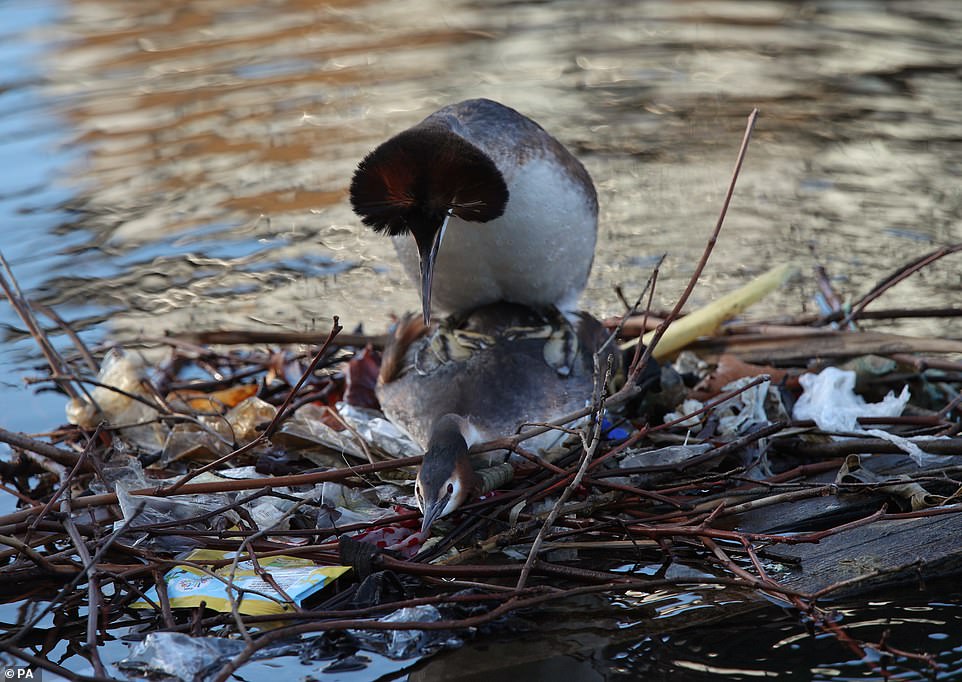 The birds mate on the nest in the South Quay of the Isle of Dogs, east London, as the country sets itself for milder temperatures