As an Arctic blast attempts to make its way to the UK, the country could see yet another spell of snow this month.

The plummeting temperature, that follows a Spanish plume, may see the warmer weather that has been enjoyed by the country over the last week see temperatures fall to 0C.

Before the icy temperatures arrive, the country can expect to feel a little chillier this weekend as cold fog and low cloud begin to emerge over the UK.

The low cloud and patches of fog will see temperatures drop to 6-7C today, with much of the country expected to remain dry and mild throughout the day.

However as chilly fog moves northwards into Wales and northern England, Britain can expect to enjoy milder weather and highs of 54F (12-13C), with the highest temperatures expected in North Devon.

As the fog clears, patches of drizzle are expected to move mainly to the west and some patchy fog may remain in the southeast. 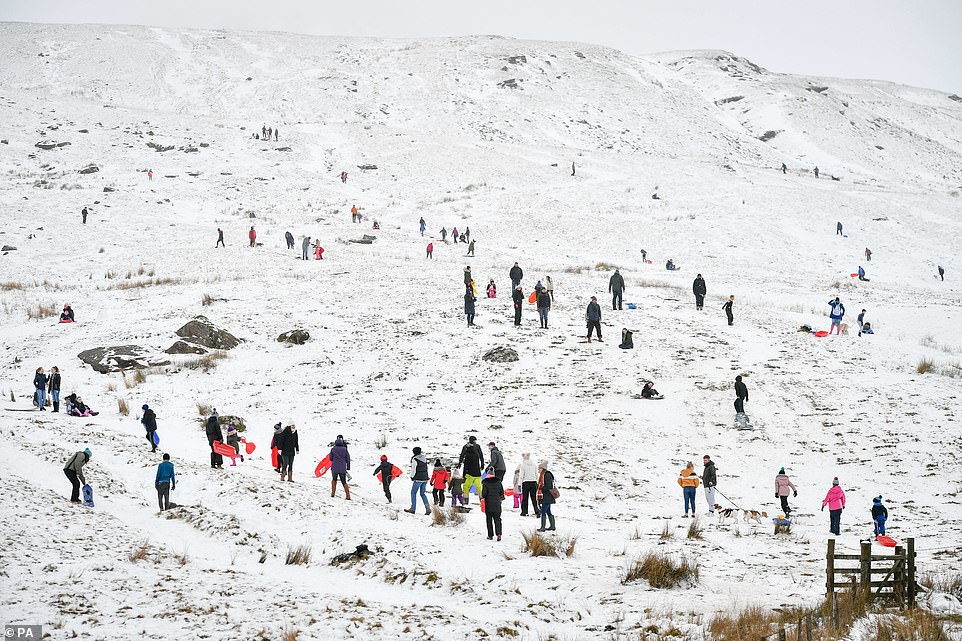 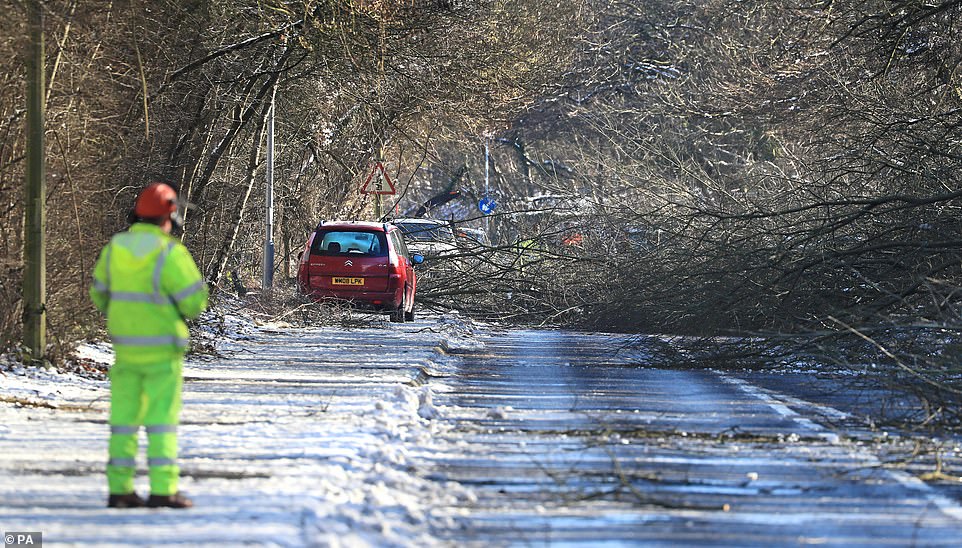 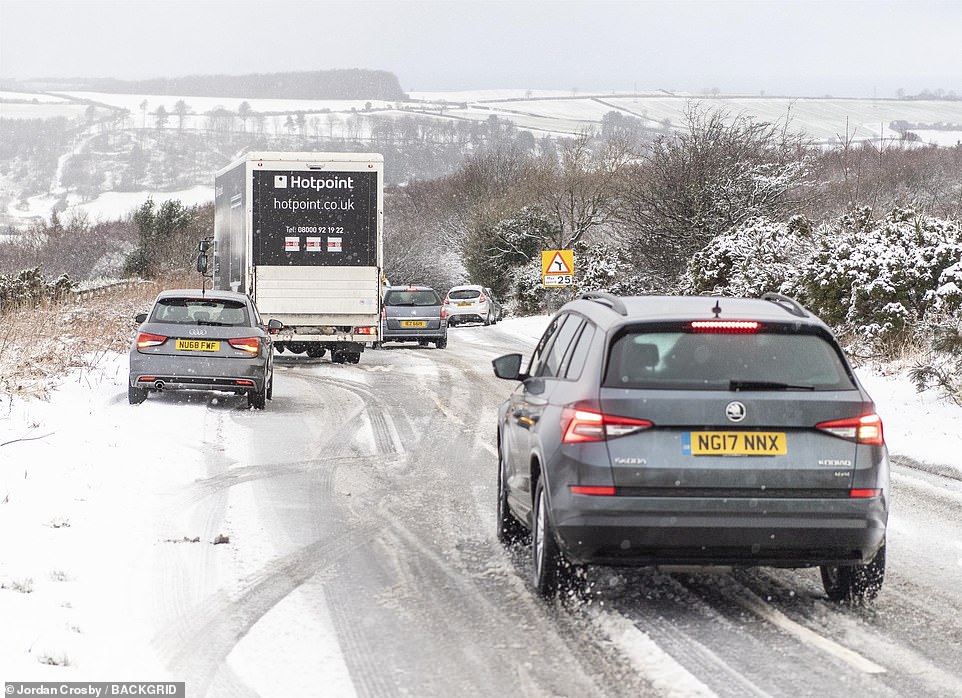 Pictured: Around 30 motorists are pictured getting stuck in snow in Birk Brow, North Yorkshire, on February 2 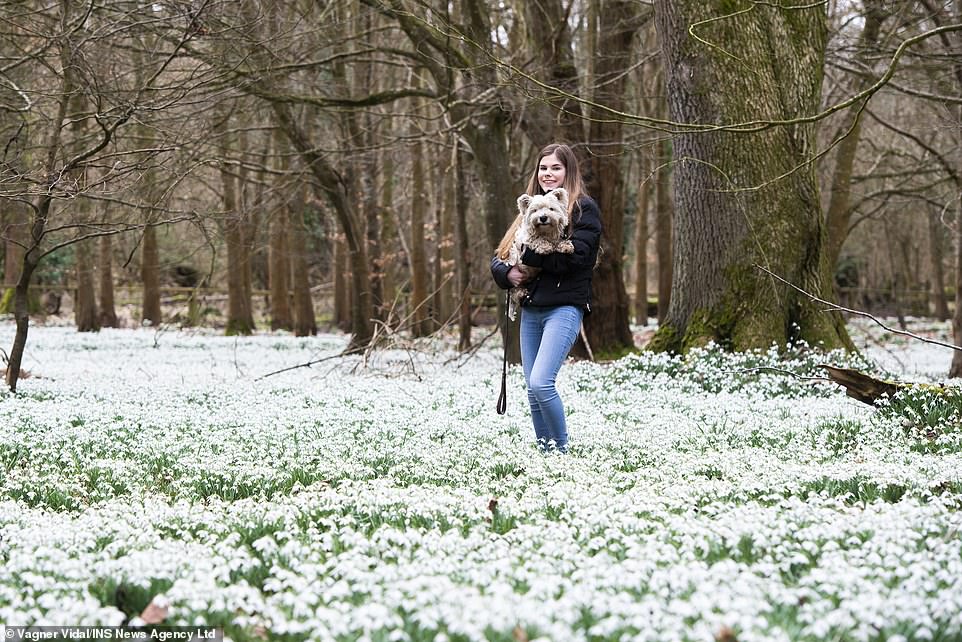 Early signs of spring were this week at Wallington Hall, near Morpeth in Northumberland, as snowdrops covered the woodland floor in a beautiful white carpet 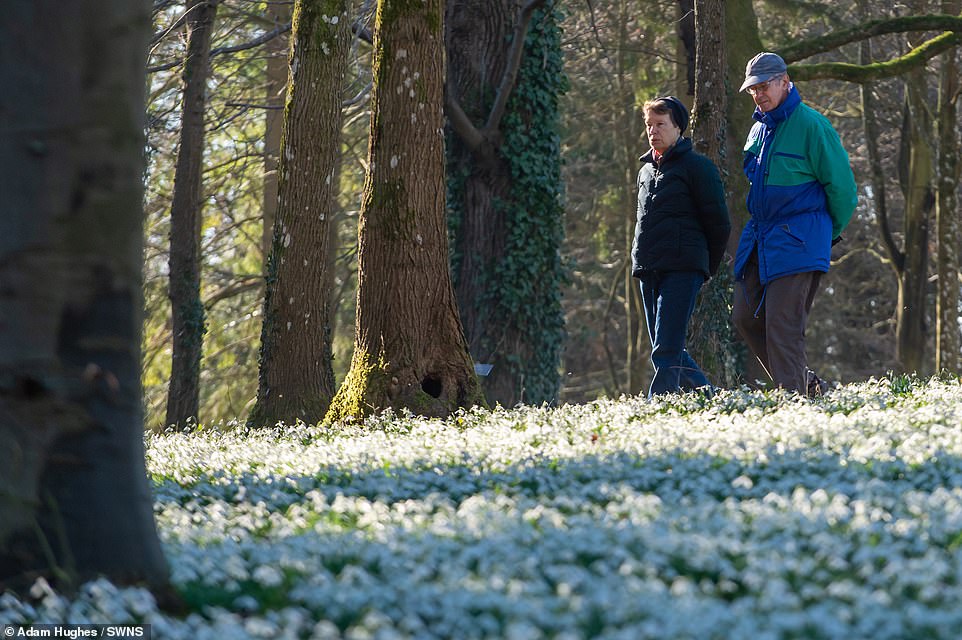 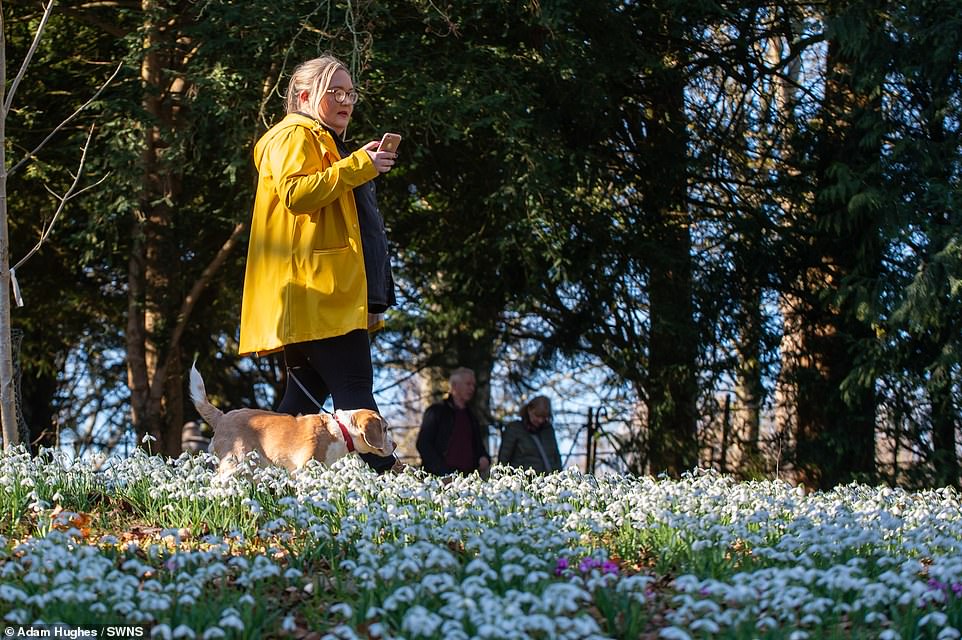 A dog walker enjoys a spot of sunny weather as she takes a stroll through Colesbourne Park, Gloucestershire today 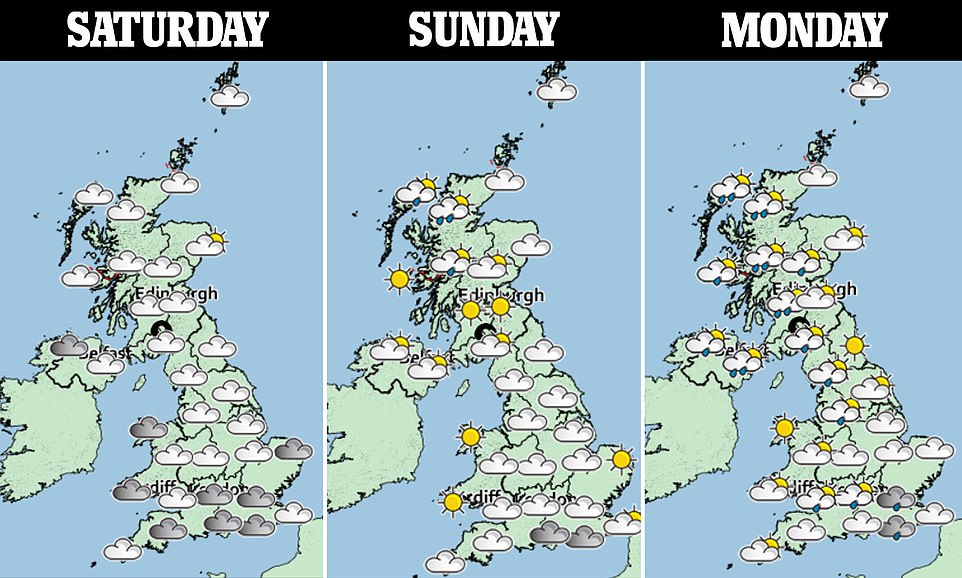 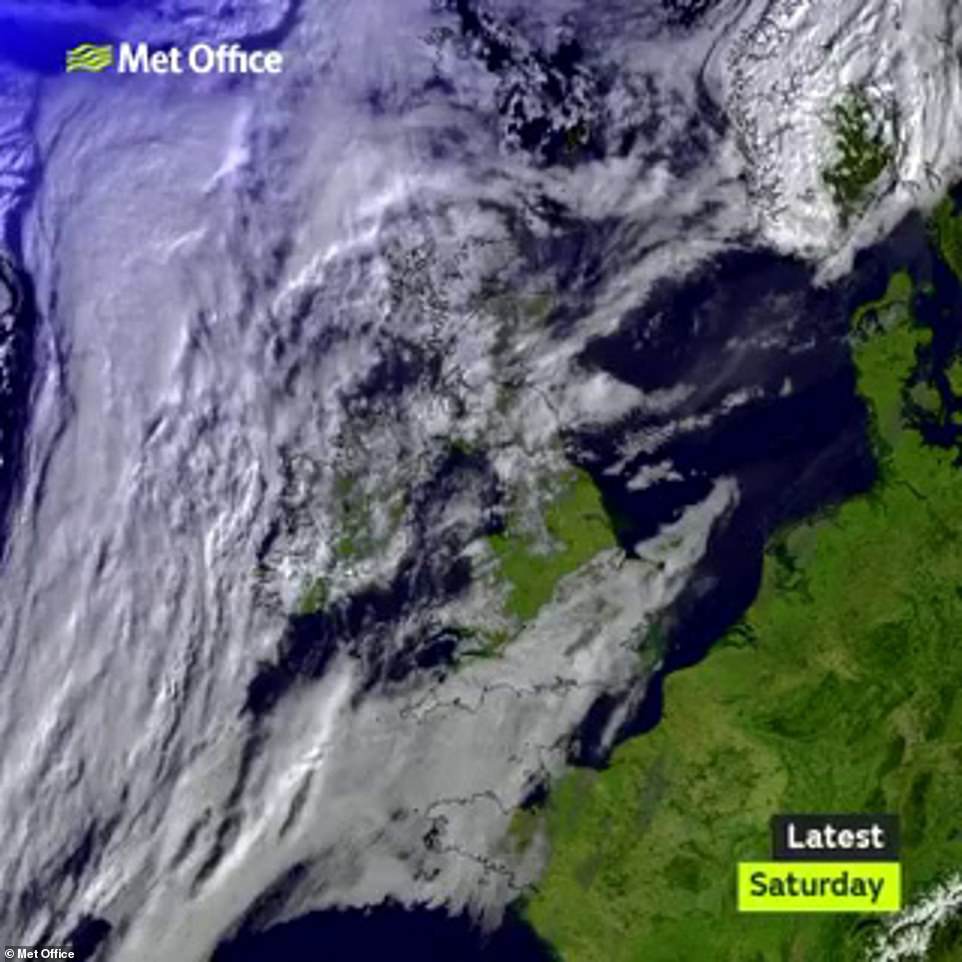 Satellite images from the Met Office show patches of sunshine across parts of the UK while other areas brace themselves for cloud and drizzle.

Earlier this week a glorious white carpet of snowdrops nestled was spotted among the enchanted woodland of a country house and hundreds flocked to Wallington Hall, near Morpeth in Northumberland, to plant an extra 100,000 bulbs in the grounds of the stately home.

The annual event, which is in its fifth year, sees families visit from all over the country to help add to the already plentiful array of delicate spring flowers.

Head gardener Simon Thompson said: ‘What’s great about snowdrops is they perpetuate themselves, and more will grow out of one single flower.

‘I like to tell children if they return to Wallington in their eighties the snowdrops they planted will still be here.

‘I try to get them to remember where they plant the flowers, so they can return and see how they are doing in the future.

‘Bulbs are usually planted in the autumn and flower in springtime. But we plant the snowdrops once they have already flowered as they do better that way.

‘It’s great because you see the results straight away. They really are a beautiful sight.’

The bulbs set to be planted are the common variety of snowdrop – galanthus nivalis – and 100,000 have cost National Trust owned Wallington Hall £7,000.

Rarer varieties such as galanthis sandersii, which are indigenous to Northumberland and have yellow markings instead of green, can also be spotted in the woodland.

The public are invited to National Trust owned Wallington Hall over the nine days of the February half term school holiday, starting today (SAT), and planting starts at 11am through to 3pm.

The mostly frost-free weather will see temperatures remain mild all round with outbreaks of sunshine across most of the UK.

However forecasters have also predicted that winds will pick up in the north and west of England as we head into Sunday afternoon.

Northern Ireland and Scotland are also expected to see patches of rain and breezy winds.

Alex Burkill told The Express: ‘Temperatures won’t fall quite as slow as they did last night but we will still see a few fog patches developing particularly towards the southeast.

‘The reason it has been so warm and so settled recently is because of the jet stream has been running through the north of the UK. 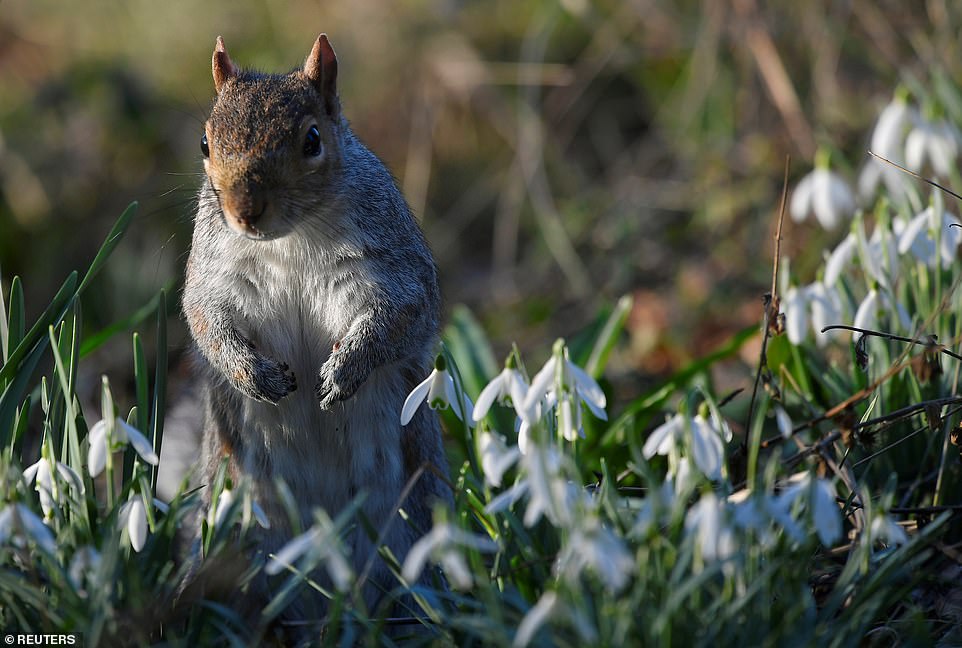 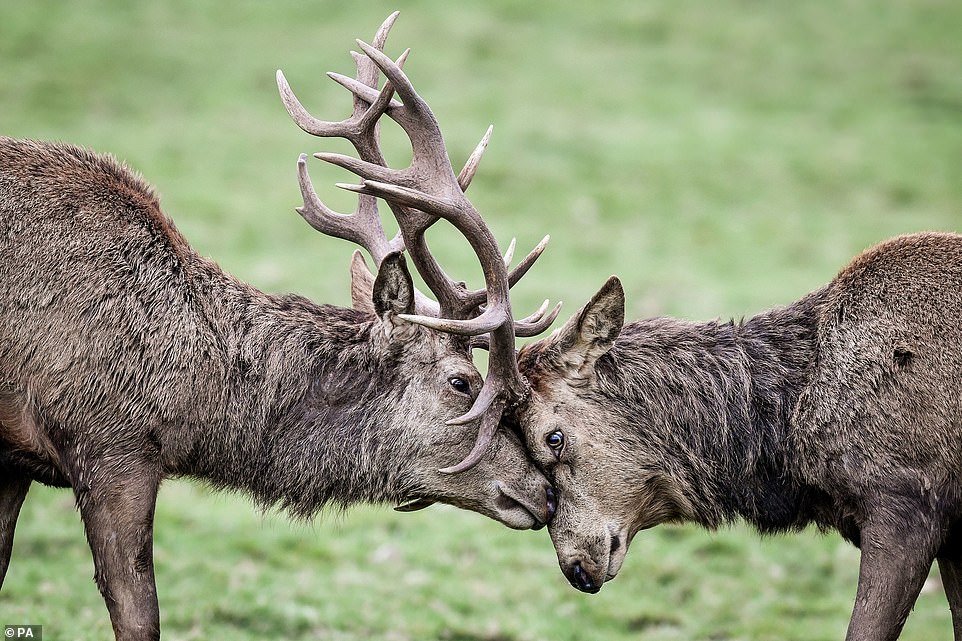 Stags are spotted locking their antlers at Ashton Court estate in Bristol, as god and mist emerge over the country 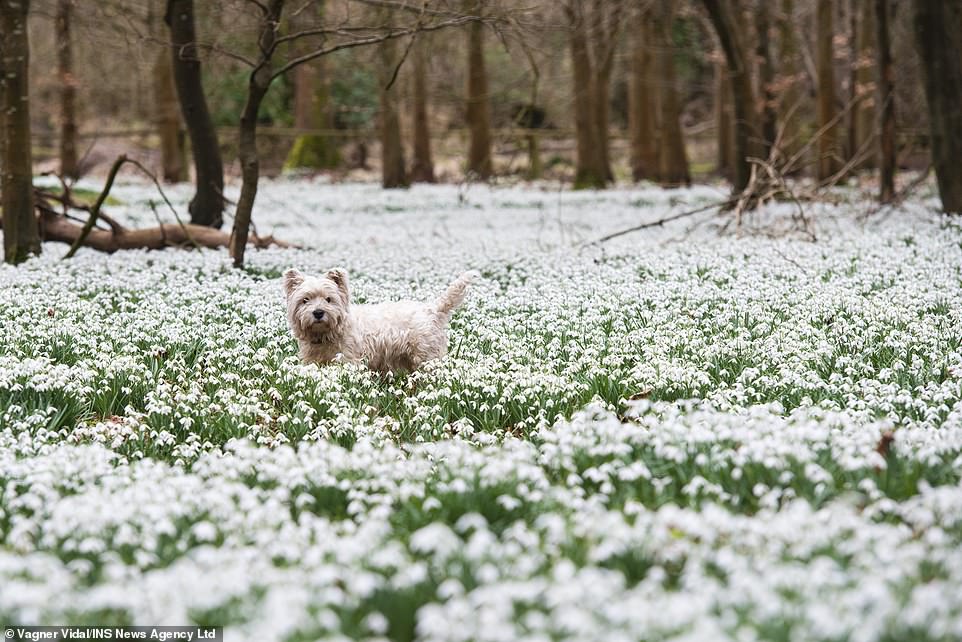 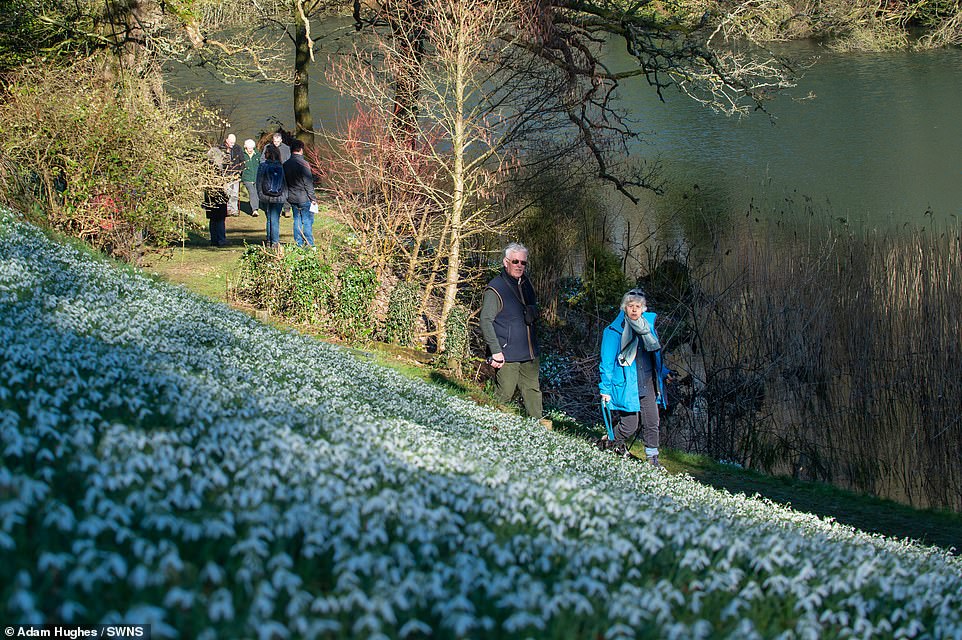 People enjoy a stroll through Colesbourne Park, Gloucestershire, today as Britain wakes up to chilly fog and mist 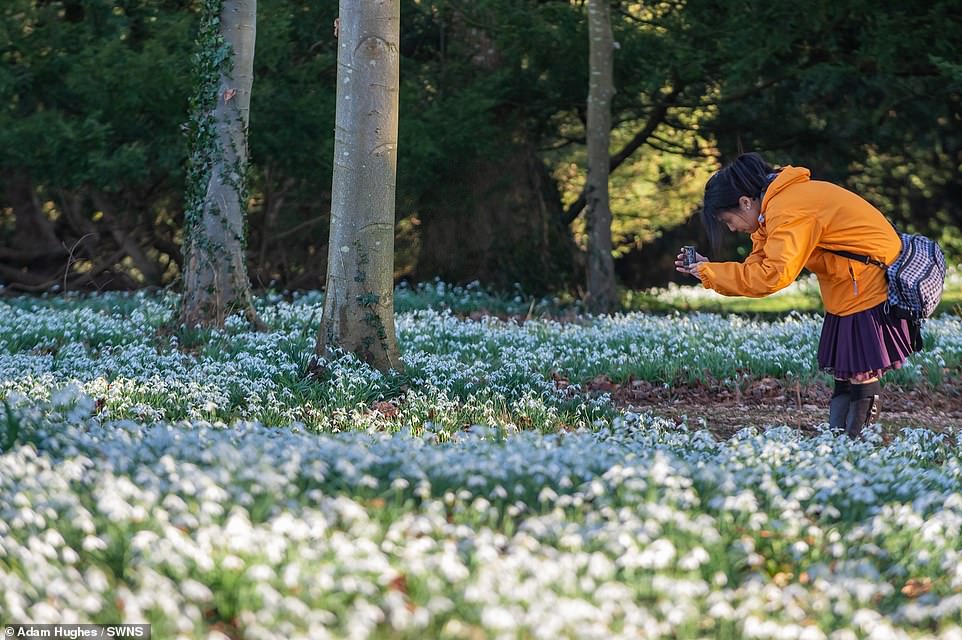 A person takes a picture of the snowdrops at Colesbourne Park, Gloucestershire, today as forecasters warn the UK will feel slightly chillier this weekend

‘However as we go through the weekend and into the new working week, that does mean things will turn a little more changeable.’

However temperatures may again plummet as we head into next week, with northern parts of the country expected to hit 0C.

The plummeting temperature may see the country brace itself for yet another outbreak of snow by the end of February. 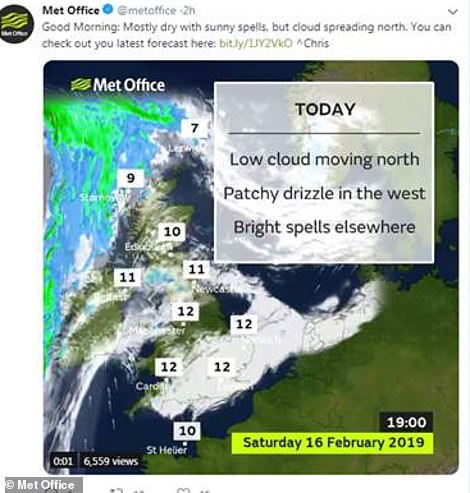 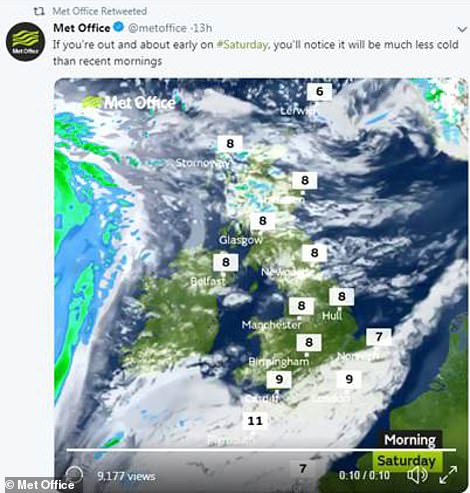 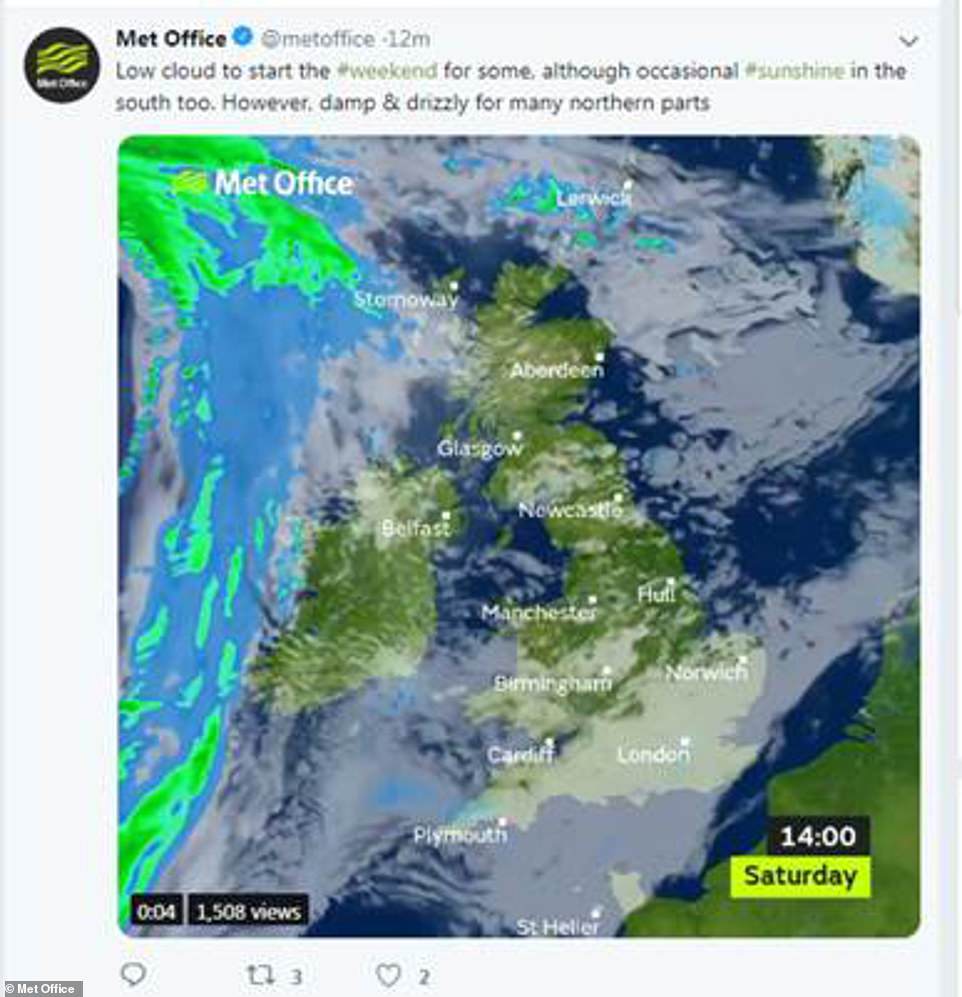