Britain will help set the EU’s budget until 2027

British officials will help negotiate the EU’s next £1trillion budget that runs until 2027 because the UK will be paying in billions for years, it emerged today.

The move had infuriated both the European Commission in Brussels and Brexiteers in Britain.

But it will be pushed through by national leaders on the European Council amid a belief British contributions could increase as access to agencies and programmes are negotiated.

Britain currently pays about £14billion a year into the EU, which sets budgets on seven year cycles. Payments are due to fall after the Brexit transition ends in 2020 but will linger until 2064 due to pre-agreed commitments and pension payments. 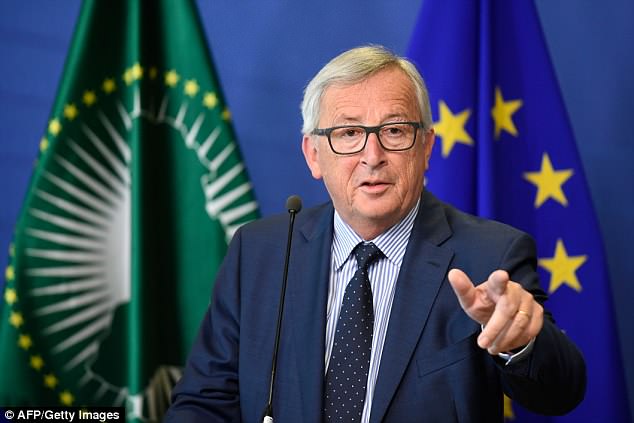 The decision has also infuriated the European Commission, run by Jean-Claude Juncker (file), amid fears Britain will interfere

Revealing the plan for Britain to take part in talks, The Times said negotiated access to key schemes and institutions could cost the British taxpayer as much as £5billion a year, even after Brext.

Bill Cash, the Brexiteer chairman of the Commons European scrutiny committee, said: ‘This is the type of trickery that the EU gets up to.

‘We have agreed to pay £39 billion to get out of the EU’s treaty structure.

‘Taking part in these budget talks risks ensnaring us again.’

Tory MP Jacob Rees-Mogg added: ‘While we might be comfortable supporting a small number of limited projects that were in our common interest I think it very strange that we would want to participate in the whole multi-annual framework.’

After failing to prevent British involvement, the commission has accused the UK of using the talks to make it easier for ‘third countries’ to be part of EU spending programmes in future years.

This is seen in Brussels as a weakening of EU unity as the price of Brexit and will be deeply opposed.

An official told The Times: ‘We have told member states that Britain is only using the MFF to influence rules defining third-country participation.’ 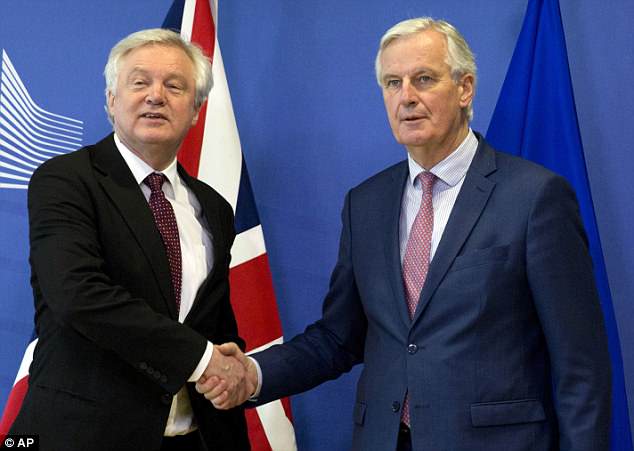 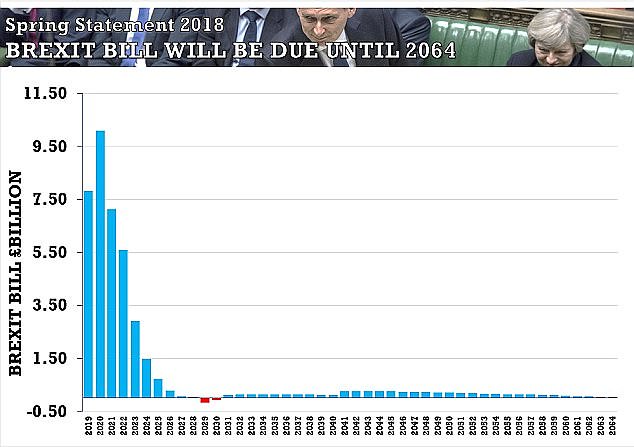 Payments from Britain to the EU are due to fall after the Brexit transition ends in 2020 but will linger until 2064, according to figures released in March

Earlier this month the European Commission presented a €1.3 trillion budget plan for the ‘multi annual financial framework’ from 2021-28.

It tries to fill the gaping hole left by Britain’s exit with higher national contributions and cuts to sensitive spending areas.

The budget decision-making process is expected to drag on into the second half of next year and requires the agreement of all 27 EU governments.

Commission officials fear that Britain will ‘leverage’ the splits over money to get a better single-market deal.

WHY BRITAIN WILL BE PAYING THE BREXIT BILL UNTIL 2064?

Britain will still be paying the Brexit divorce bill until 2064, new analysis of the deal revealed in March.

The Office for Budget Responsibility said most of the £37billion would be paid over the next five years before a long commitment on costs such as pensions.

Some of the money has already been committed in promises to re-join EU agencies and match farming subsidies.

At the Spring Statement, Treasury sources said Britain had negotiated the right to bring payments to an end earlier with a lump sum payment but that it would only do so if it was in the national interest.

Brexiteer Nigel Evans told MailOnline the money would be better paid as a single lump sum and part of the wider exit deal.

He said: ‘UK taxpayers can pay the obligations for the feather bedded pensions for Lord Mandelson and his mates but that can be sorted by actuaries as part of the overall exit package.’

But in April the national Audit Office warned the final Brexit bill could be billions of pounds higher.