Britain’s best restaurants have been revealed in a brand new guide by the AA.

The Restaurant Guide 2020 highlights all the restaurants that have been awarded coveted rosettes by AA inspectors. A must-read for foodies.

The 27th edition of the guide features 2,000 eateries, chosen for their ‘culinary excellence’. Here we present a mouthwatering hors d’oeuvres to the new publication…

The food on offer at the Moor Hall in Lancashire. The restaurant has been transformed from a ’16th-century manor into a foodie destination’

Moor Hall in Lancashire, which has five rosettes, has been transformed from a ’16th-century manor into a foodie destination’.

According to the AA, it has a ‘chic restaurant and state-of-the-art open kitchen in a modernist extension with a soaring raftered roof and glass walls’.

The guide continues: ‘Expect virtuoso creations built on ingredients that can’t be bettered, executed with unsurpassed attention to detail and a highly evolved way of doing things.’

Alyn Williams at The Westbury, London 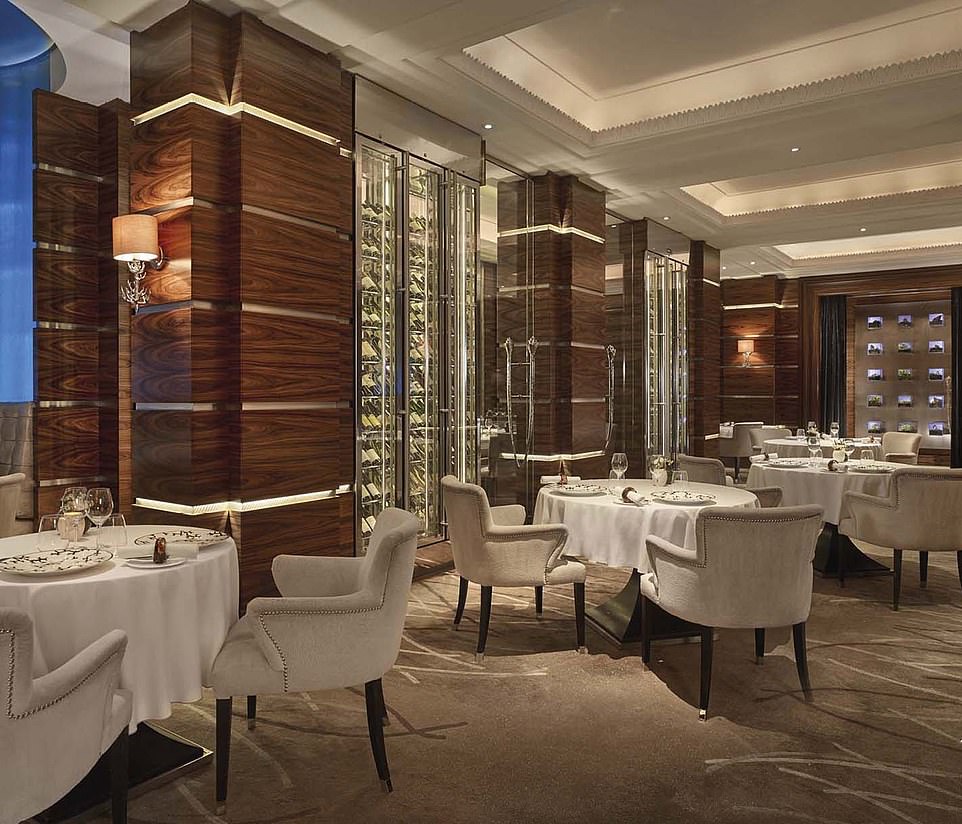 Chef Alyn Williams is in charge of the restaurant at London’s five-star The Westbury hotel in the upmarket Mayfair area.

The AA says the restaurant, which has four rosettes, offers ‘modern European cuisine’, with one of the stand-out main courses being ‘Cartmel Valley venison alongside roasted and pickled celeriac, black pudding puree and trompette mushrooms’. 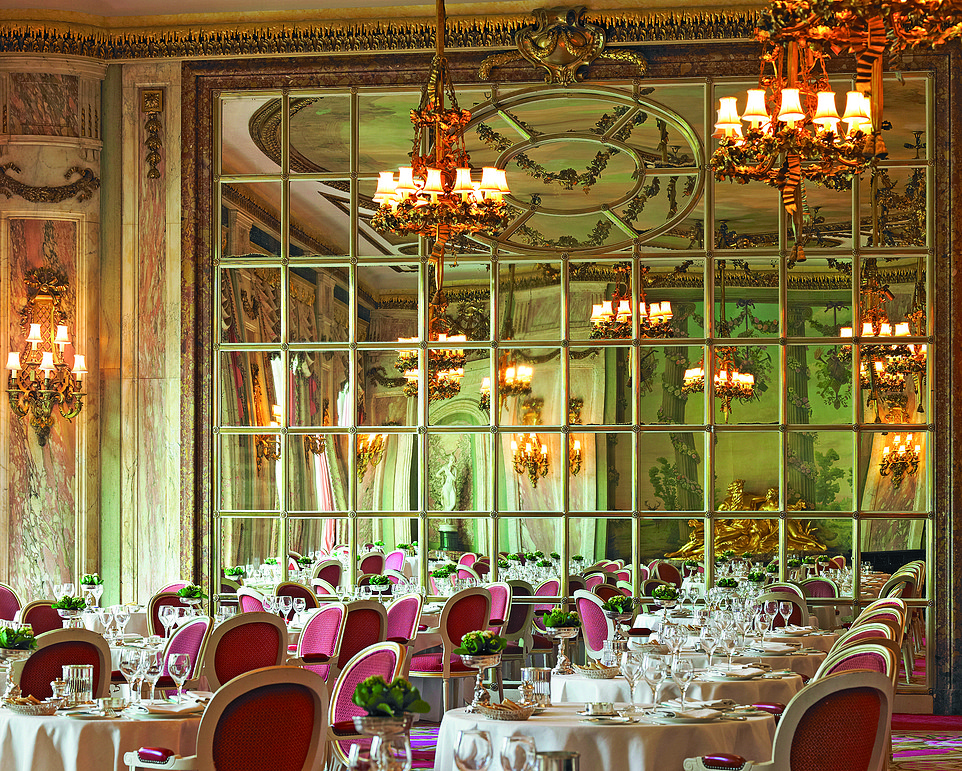 Located on the northern tip of Green Park, The Ritz first opened in 1906 and is still regarded as the capital’s ‘most opulent lodgings’.

The guide describes the Ritz, which has three rosettes, as having a ‘stunningly beautiful dining room, lined with French windows along the park side, topped with a ceiling fresco of sunlit clouds, overseen by a glided statue of Poseidon’.

According to the AA, the menu consists of ‘haute cuisine of yesteryear’ with dishes such as Dover sole veronique, veal fillet with asparagus, wild garlic and Madeira, and the Mont Blanc dessert, with its chestnut and rum ice cream. 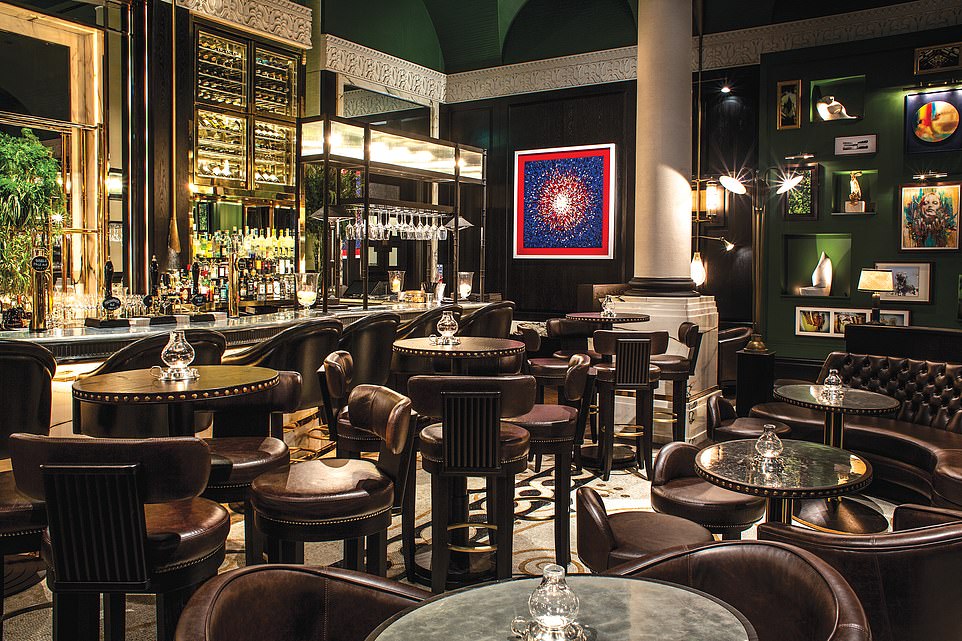 Kerridge’s bar and grill, pictured, is inside London’s Corinthia Hotel. The AA describes the food as a ‘celebration of Britishness’

The ‘super-posh’ Corinthia Hotel is the venue of chef Tom Kerridge’s first ‘big city venture’ – which has three rosettes.

The AA says that as you would expect, the food is a ‘celebration of Britishness’, with dishes that are ‘big on flavour and impact’.

It singles out one of them, a main course of ‘Ramsbury Estate venison with carrot in various guises, coriander emulsion, and a side of venison chilli topped with aerated cheese sauce and crisp barley’. 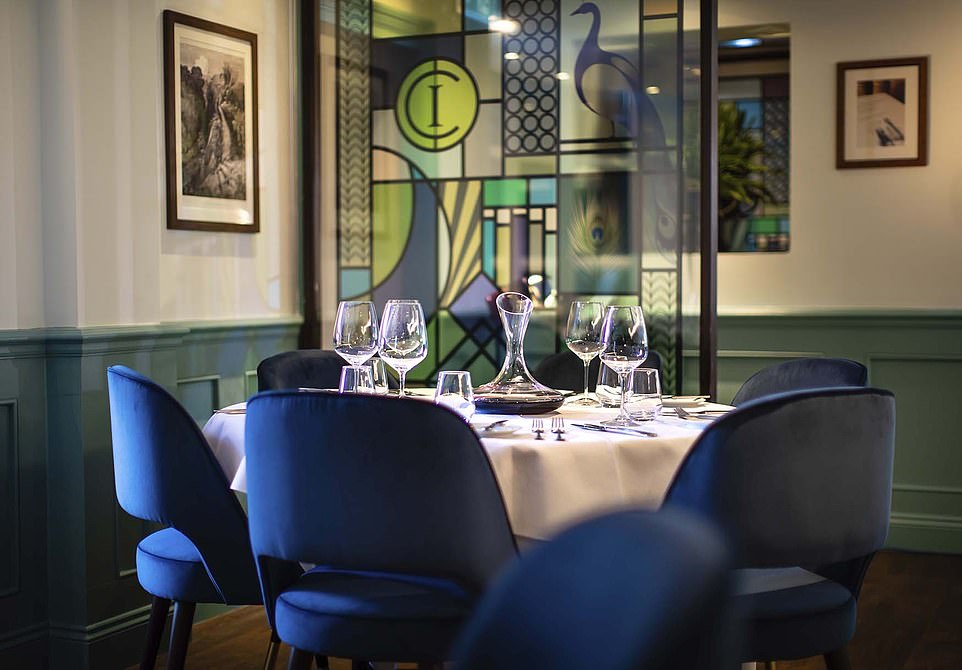 Chapter One, pictured, in Bromley is run by chef Andrew McLeish. The AA says it is a ‘discreetly upmarket’ and ‘relaxing venue’

Chapter One, which has three rosettes, is a ‘discreetly upmarket’ and ‘relaxing venue’ in Bromley on the ‘suburban cusp of Kent’.

It is run by chef Andrew McLeish and the AA says he strikes ‘an inviting balance between assured modern European cooking and the pressing need to offer value’.

Included in the starters section is a ‘pressed terrine of pig’s head with a crispy, croquant, gribiche sauce and mustard dressing’, while the dessert list includes an ‘indulgent Valrhona chocolate marquise vividly offset by boozy griottine cherries and cherry sorbet’. 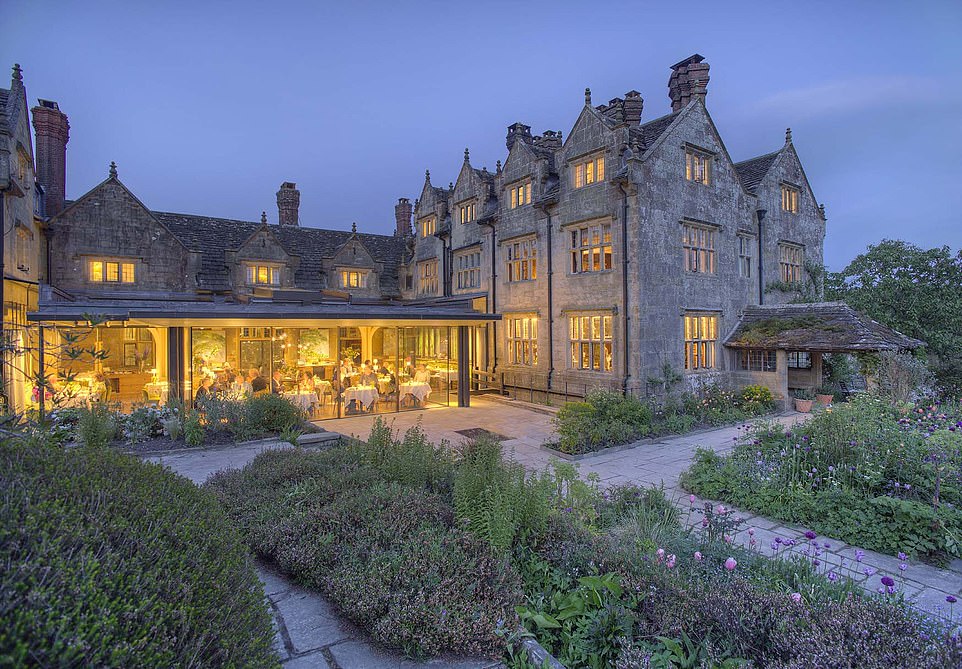 The Gravetye Manor Hotel is an Elizabethan mansion in West Sussex. Its stylish new dining room is run by chef George Blogg

The Gravetye Manor Hotel, which has four rosettes, is an Elizabethan mansion that has been brought into the 21st century alongside ‘elegant modern comforts’.

Its stylish new dining room is run by chef George Blogg who ‘showcases his dynamic British cooking, and the results have brought wow factor in spades’.

The AA says: ‘Expect a modernist style that explores creative combinations of flavour and textural contrasts, starting with the roasted Norfolk quail’. 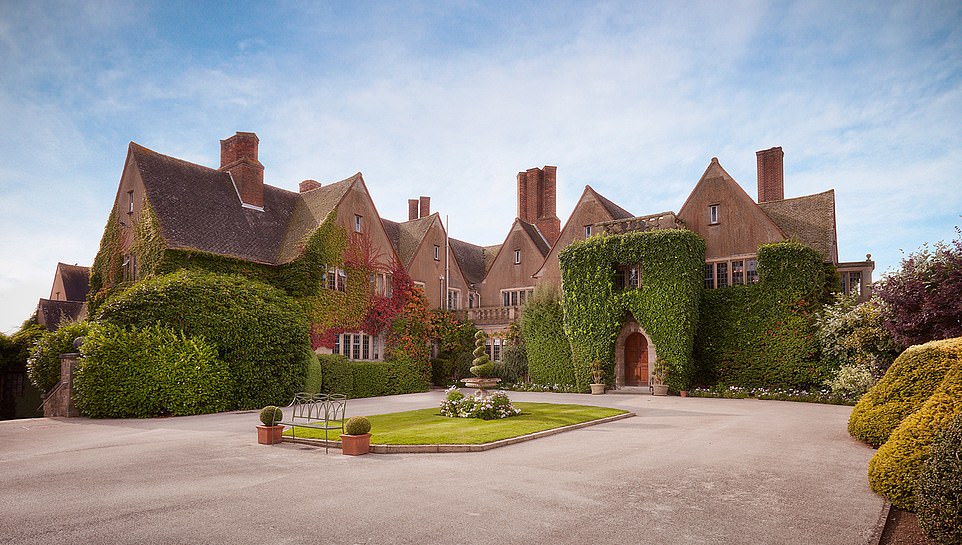 The Dining Room at the Mallory Court Hotel, pictured, in Leamington Spa. It has a seasonal a la carte menu and a daily-changing set price menu plus a seven-course taster menu

The Mallory Court Hotel is a manor house set in 10 acres of grounds, which includes a garden kitchen, where some of the produce for the three-rosette restaurant is grown.

The AA says: ‘There are lovely garden and countryside views from the smart panelled restaurant, where floral drapes and elegantly dressed tables all add up to a classy setting.’

It has a seasonal a la carte menu and a daily-changing set price menu plus a seven-course taster menu.

The Three Chimneys & The House Over-By Colbost, Isle of Skye 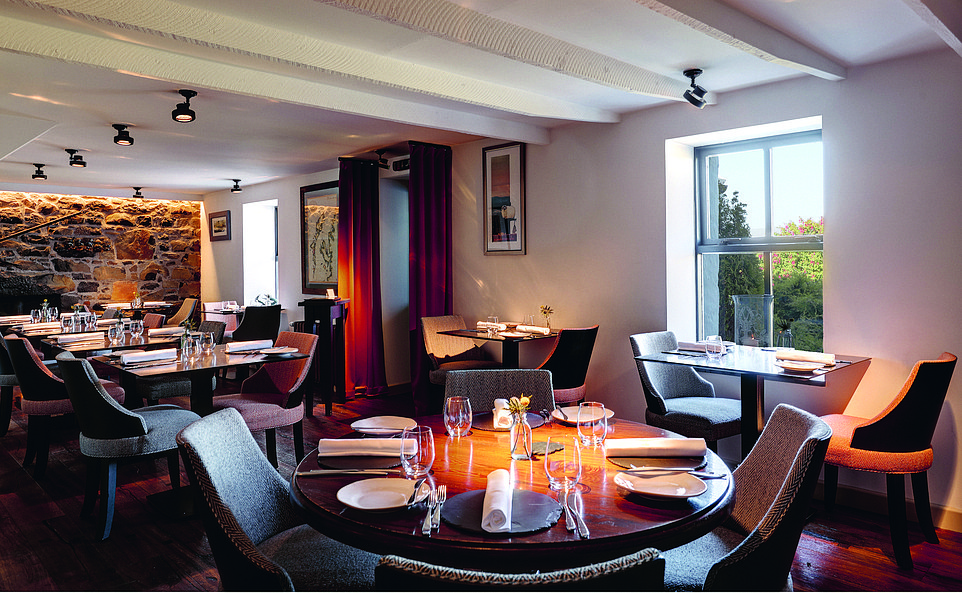 The 140 new entries for 2020 include: a restaurant in a former WWII spy facility (Arisaig House, Arisaig), a restaurant in the village which appears in the UK passport (The Brasserie, Bibury), Tate Britain’s eatery (The Rex Whistler, London), a dining room exhibiting Chatsworth’s Devonshire Collection (Cavendish Hotel, Baslow), and a dining spot in the town with ‘England’s best view’ (Mizu, Borrowdale).

The Three Chimneys is a remote three-rosette restaurant with rooms on the Isle of Skye with a ‘foodie destination status’.

The head chef is Scott Davies, whose ‘cooking has become noticeably more complex but still firmly rooted in its island environment’.

One of the stand-out dishes is the wood-roasted Skye venison that arrives atop of a cabbage wrapped ball of shredded venison, offset with a medley of turnip, charred Brussel sprouts, quince and chocolate-enriched sauce. 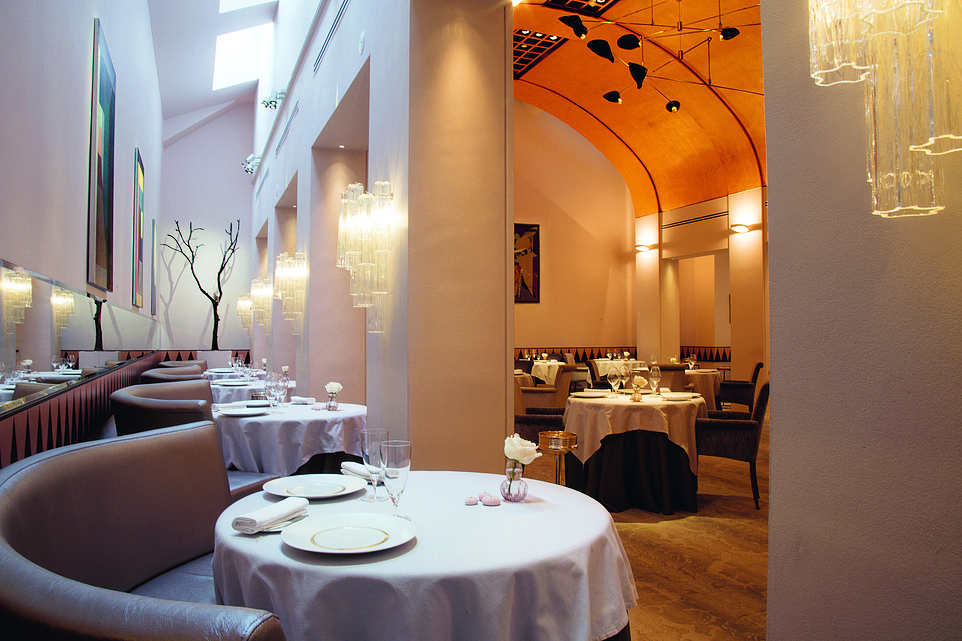 Restaurant Patrick Guilbaud, pictured, is set inside Dublin’s five-star Merrion Hotel. It has been run by chef Guillaume Lebrun since its opening in 1981

WHAT THE AA ROSETTES MEAN…

One Rosette – These restaurants will be achieving standards that stand out in their local area featuring food prepared with care and good quality ingredients.

Two Rosettes – The best local restaurants, which aim for and achieve higher standards, better consistency, greater precision in cooking and obvious attention to the selection of quality ingredients.

Three Rosettes – These are outstanding restaurants that achieve standards that demand national recognition well beyond their local area. The cooking will be underpinned by the selection of the highest quality ingredients, the timing, seasoning and judgement of the flavour combinations. This will be supported by intuitive service and a well-chosen wine list.

Four Rosettes – Among the top restaurants in the UK where the cooking demands national recognition. These restaurants will have intense ambition, a passion for excellence, superb technical skills and remarkable consistency.

Five Rosettes – The pinnacle, where the cooking compares with the best in the world. These restaurants will have highly individual voices, exhibit breathtaking culinary skills and set the standards to which others aspire, yet few achieve.

Restaurant Patrick Guilbaud is set inside Dublin’s five-star Merrion Hotel and it has been run by chef Guillaume Lebrun since its opening in 1981.

The AA describes the dining room as having a ‘barrel-vaulted ceiling… with warm tones and striking artworks from Irish artists on the walls’.

It adds that the four-rosette cooking shows ‘genuine ambition and creativity’ with dishes such as ‘pan-roast duck foie gras lifted with pineapple, dark rum caramel and tonka bean or the fresh simplicity of Flaggy Shore Dainty oysters with lovage, horseradish and sour apple’.

Simon Numphud, managing director at AA hospitality and hotel services, said: ‘We are pleased to see the hospitality industry going from strength to strength, with over 140 new dining destinations being added to The Restaurant Guide 2020.

‘The establishments in this year’s Guide demonstrate the high quality of culinary experiences across the country, offering delicious food and impeccable service.’

In addition to restaurant listings, The Restaurant Guide 2020 includes interviews with top chefs, as well as details of the winners of the AA Hospitality Awards, including Restaurants of the Year, AA Wine Awards and Chefs’ Chef of the Year. 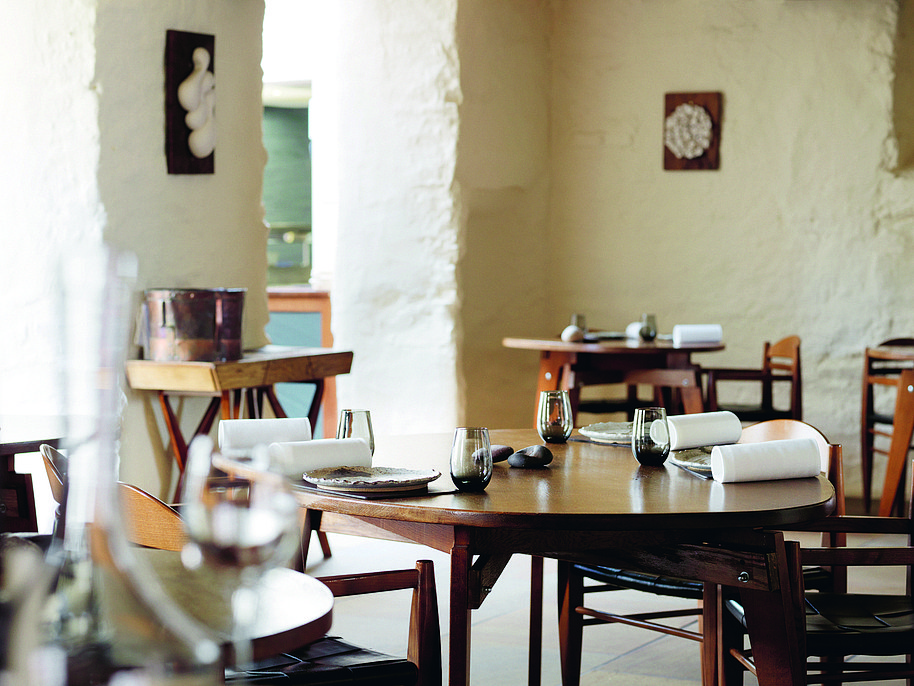 L’Enclume restaurant in Cartmel, Cumbria, has five rosettes. It is described as offering ‘state-of-the-art contemporary cooking’ 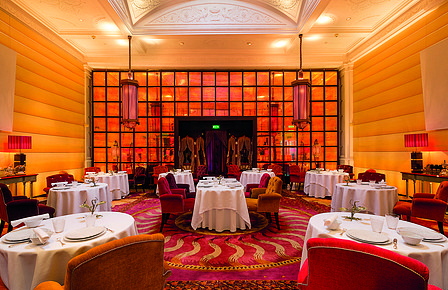 Sketch is a restaurant inside a Grade II-listed townhouse in Mayfair with five AA rosettes. Its food is described as ‘highly conceptualised’