A heroic policeman repeatedly hacked in the head with a 2ft rusty machete has relived how he fought off the savage attack as he prepares to return to work.

And despite suffering grisly skull injuries requiring surgery and leaving scars, the officer remarkably managed to fend off his assailant, Muhammad Rodwan, with a Taser.

Describing the horrifying assault on LBC this morning, he said he only realised ‘four or five hits in’ he was being slashed with the mammoth blade.

‘There was a point when I was on all fours, blood is coming out of my head like a tap, I thought to myself “I’m in a bit of trouble here”.’ 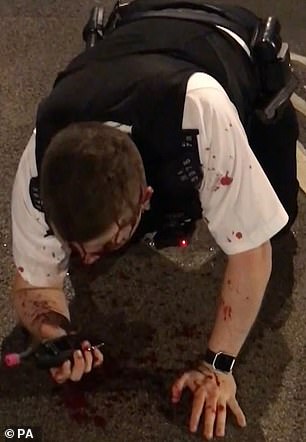 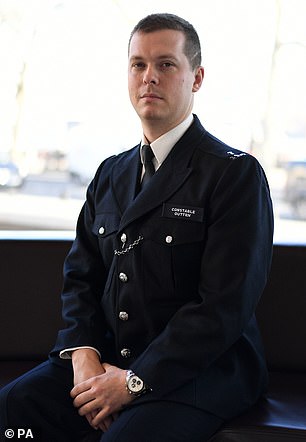 PC Outten suffered six severe head wounds (left, and right, after recovery) and a court heard he could have died had he not bravely fired off his Taser in a bid to disarm Rodwan 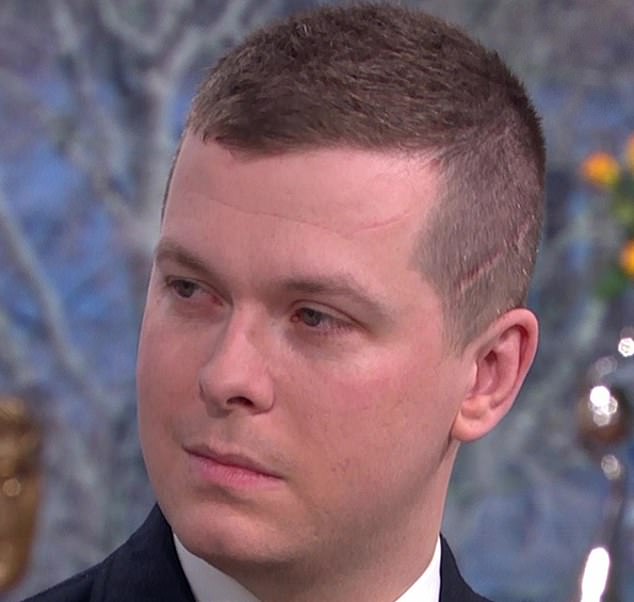 Proudly wearing his uniform in the studio, Pc Outten told how he had pulled over Rodwan’s uninsured van when the driver flew into a rage and began punching him.

The policeman went on: ‘He tries to dive into the back of his van, which I didn’t know at the time but he lives there, so what he has there I had no idea… he grabs a machete and starts chopping up my head.’

‘I only realised four or five hits in. I’m there fighting him thinking “why’s my head getting wet?” then I realise it’s not raining so then I focus my mind and think, well that’s a machete, so this must be blood.’

Pc Outten said he yelled ‘machete’ to warn off his colleagues and scrambled backwards out of the van.

Dramatic footage from the August attack shows Rodwan, 56, leaping on top of downed Pc Outten who desperately tries to shield himself from the machete.

He added: ‘I was thinking that if I can slow my breathing, slow my heart rate, slow the blood loss, and stop myself from passing out. 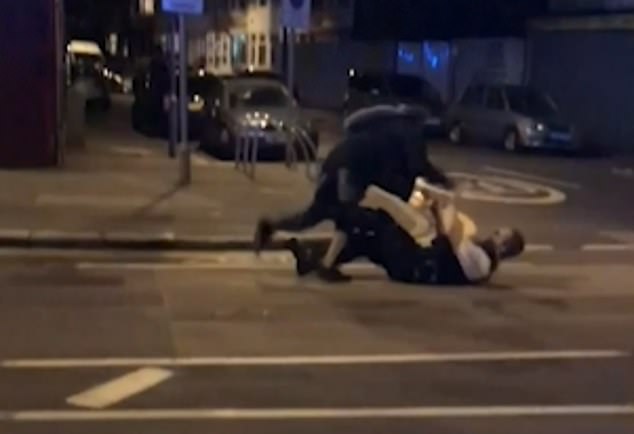 Pictured: The machete used by Rodwan to fracture PC Stuart Outten’s skull during a sustained assault in east London 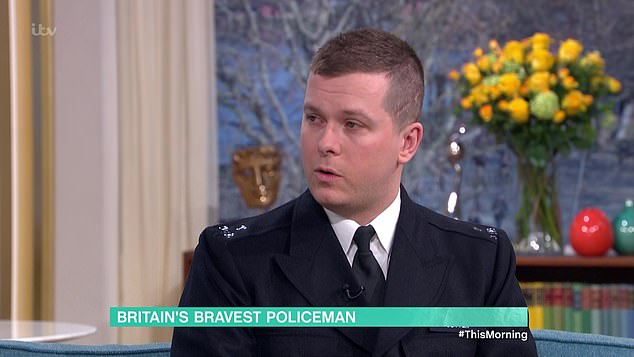 He told This Morning his fiancée Lizzie is very worried about him returning for work, but said ‘I’ve managed to convince her I won’t get into as much trouble as the last time’

‘Because if I had pass out, I can’t guarantee that I can keep my heart beating.’

The officer only managed to stop the thug by firing his Taser, a piece of kit hailed by him as invaluable.

Responding to a question from presenter Nick Ferrari if the Taser saved his life, Pc Outten responded: ‘Yes. Without that Taser, I’d be dead. I wouldn’t be talking to you now.’

Rodwan was cleared of attempted murder but convicted of wounding with intent to cause grievous bodily harm and sentenced to 16 years in jail.

The constable, baring the scars received from the attack, also detailed his grisly injuries.

He said: ‘I took six machete strikes to the head and two to the arm. I’ve got visible scars all over my head. 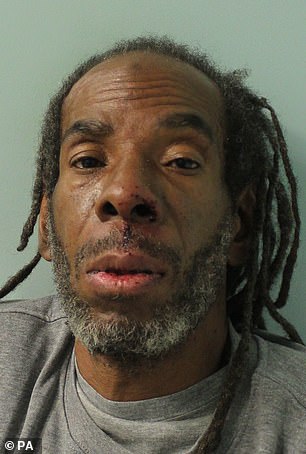 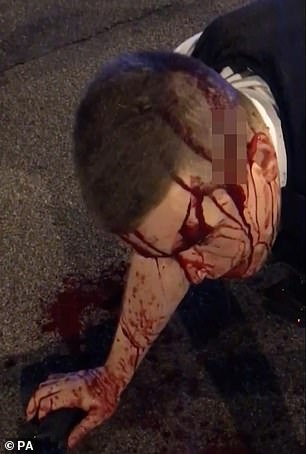 Muhammad Rodwan (left), fractured the skull of PC Stuart Outten (shown lying on the ground injured, right) when he pulled him over for driving without insurance

Pc Outten was joined in the interview by boss detective chief superintendent Richard Tucker who revealed 16 officers are assaulted every day.

Pc Outten will not perform frontline duties on the beat while he continues to recover, but will see a doctor today to declare him fit to return to work.

The constable said: ‘I can’t wait. I would have been out (on the beat) two weeks later if they had let me.’

In October during a trip to New York, he proposed to his now fiancée Lizzie Matthews, who is also a police officer.

He told This Morning: ‘Lizzie is very worried about me returning for work, but I’ve managed to convince her I won’t get into as much trouble as the last time.’

Pc Outten also said he does not harbour any ill will towards Rodwan and claimed the attack was not personal.

In a humble tribute to his fellow officers, he said: ‘That night I was doing my job and my colleagues are doing the same thing every day.’

Listeners of Pc Outten’s remarkable account praised the officer and wished him well as he returns to work for the first time since the attack.

A listener called Beverely tweeted: Listening to Nick Ferrari and Pc Stuart Outten and his boss Richard giving a horrendous account of being hacked about the head and body but now back at work!

‘I’d like to thank Met Police for keeping us Londoners safe every single day. You do a great job. Thank you Stuart.’