The UK’s last remaining feudal village complete with 17 traditional red brick farms, 10 cottages, a pub and even the title of lord of the manor is up for sale for £7million.

Laxton in Nottinghamshire is an 1,845-acre heritage estate which dates back to 1066 when the manor was granted to Geoffrey Alselin by William the Conqueror.

In 1981 the Crown Estate purchased Laxton to try and maintain the open field strip farming system and the village is now the only place left in the country to farm in this way, reports the Guardian.

The 1,845-acre Laxton estate, which includes 17 farms, 10 cottages and a pub, in Nottinghamshire is on sale for £7million 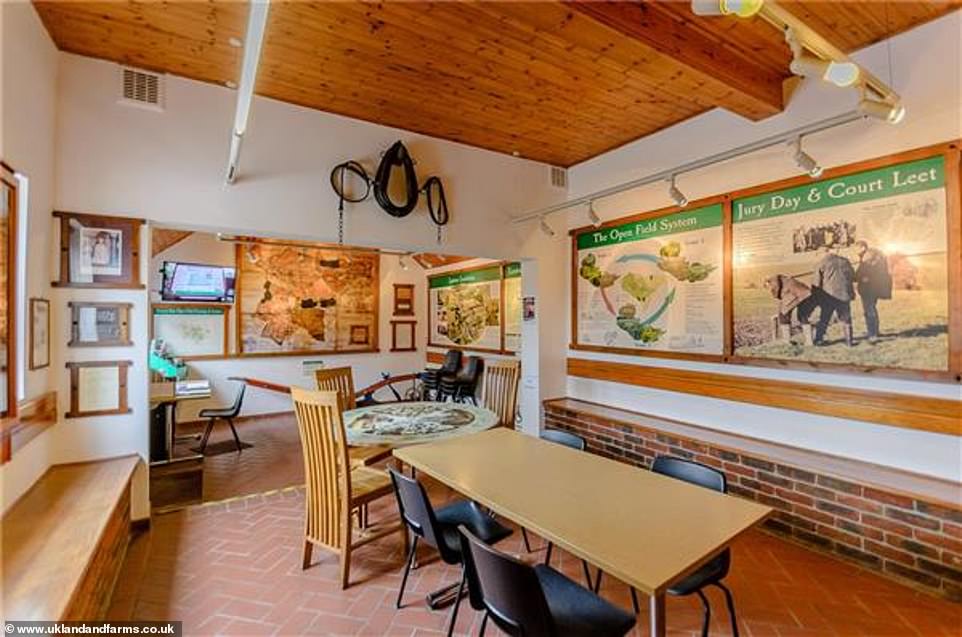 Hanging in the estate’s museum (pictured) is a copy of a 1635 map of the village which shows how little layout has changed over hundreds of years. Laxton dates back to 1066 when the manor was granted to Geoffrey Alselin by William the Conqueror 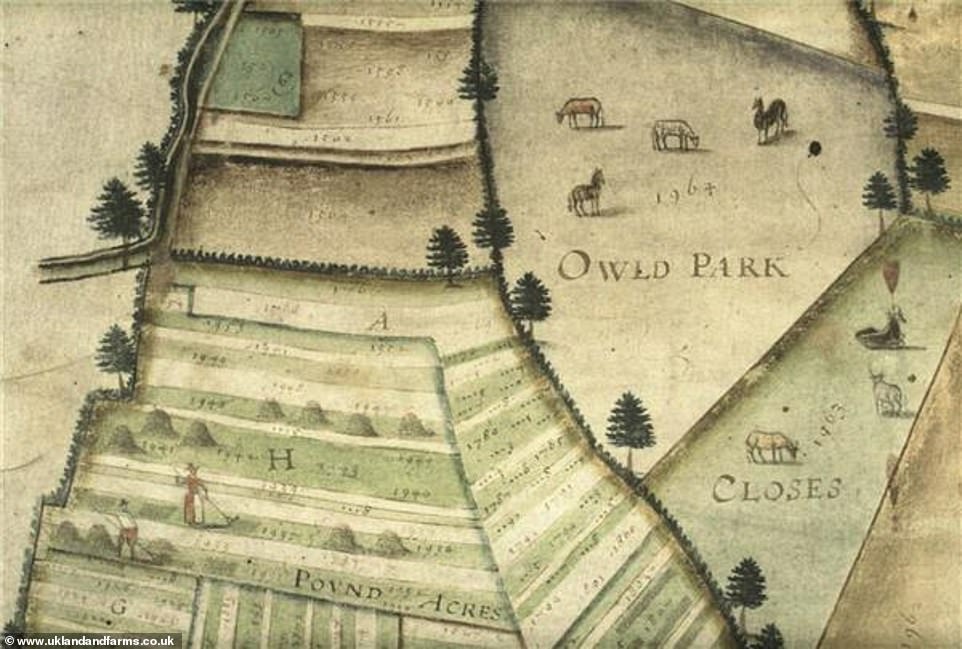 The unique estate is the last place in the country to operate using open field strip farming where individual strips of land are owned or occupied by separate farmers, who work the same space each year

The layout of Laxton has barely changed in hundreds of years and the same families have worked the land for generations.

Stuart Rose’s family has farmed in the area for 400 years and he hopes his own daughters will continue the tradition – as well as the new lord of the manor.

However Mr Rose, who runs Bottom Farm in West Field, Laxton, understands farming isn’t the same as it was when his own grandfather was working the land and said that the average age of a resident in Laxton now is 65.

He said: ‘Fifty years ago, farming here was a living for two generations. Now, a farm like ours is a part-time job for one person. 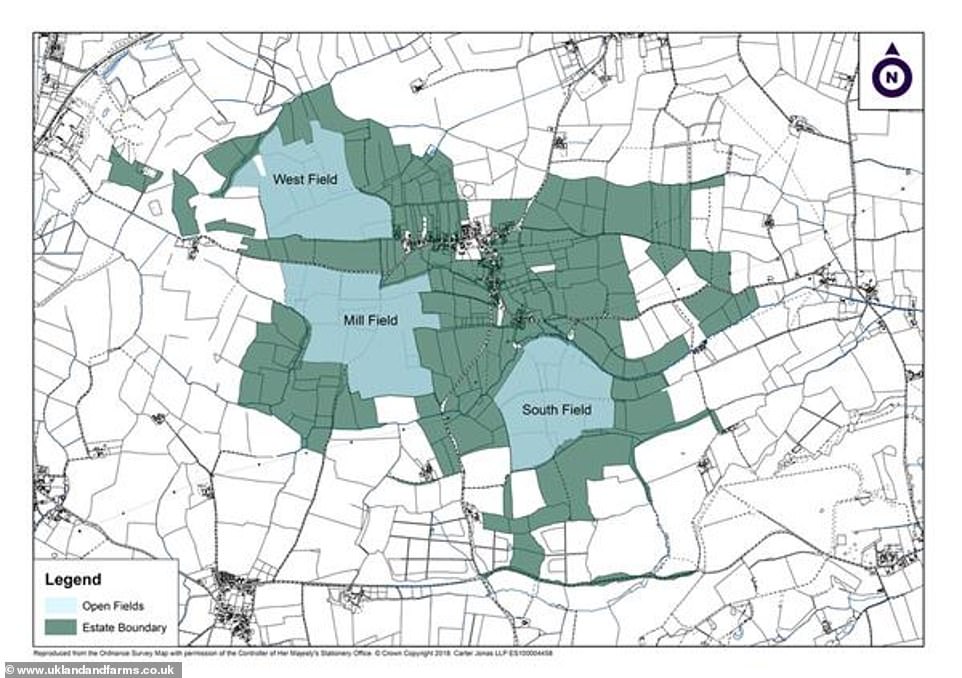 The three open fields (shown in blue) are divided into strips and worked by individual farmers. Laxton village is in the centre of the estate and the boundary of the 1,845-acre site is marked in green 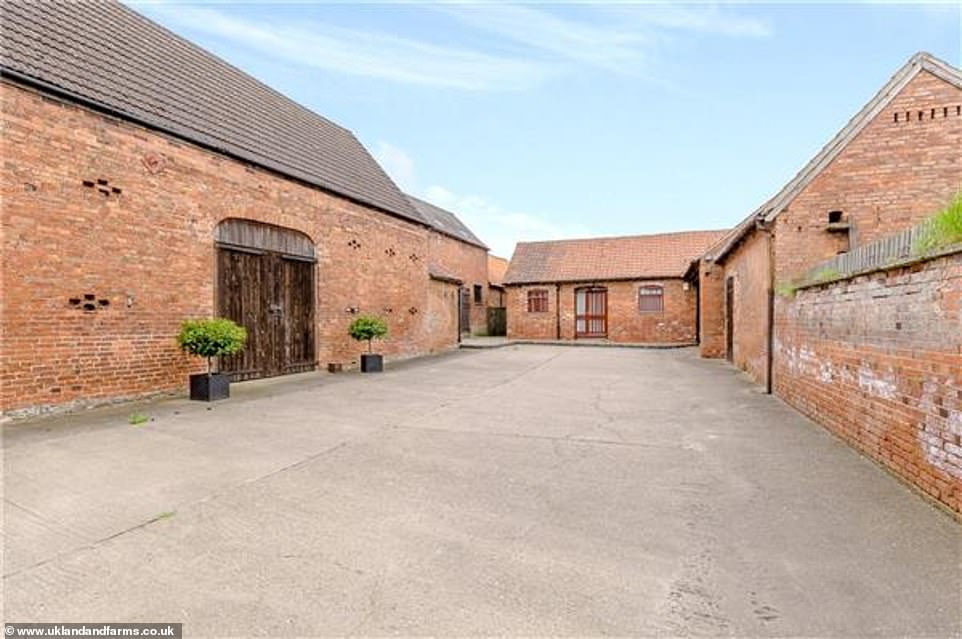 There are 17 traditional red brick farms such as Cherry Tree farm, Smithy Farm and Ivy House Farm on the estate. Pictured are the buildings and yard at Holme View Farm 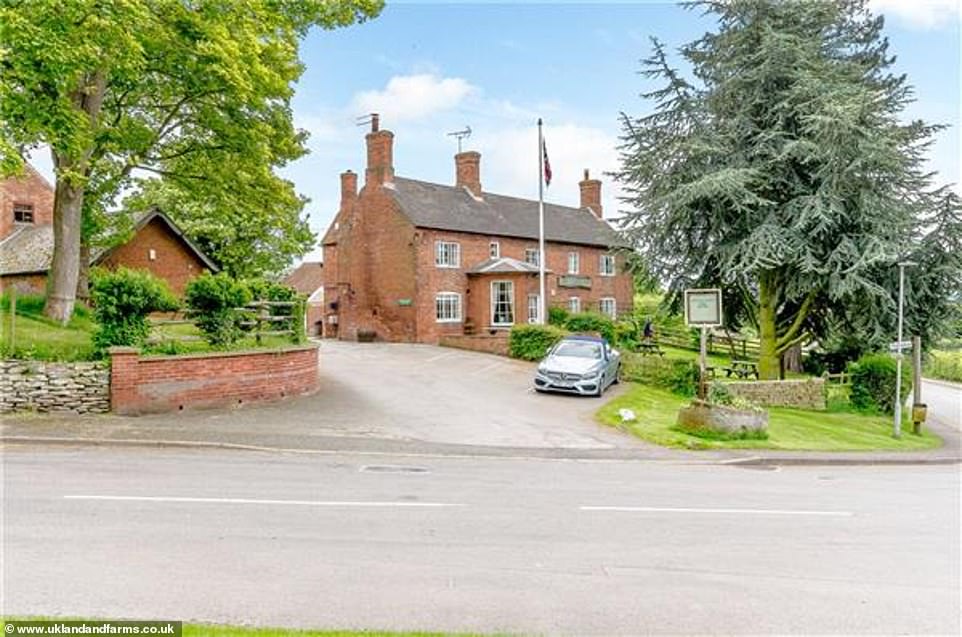 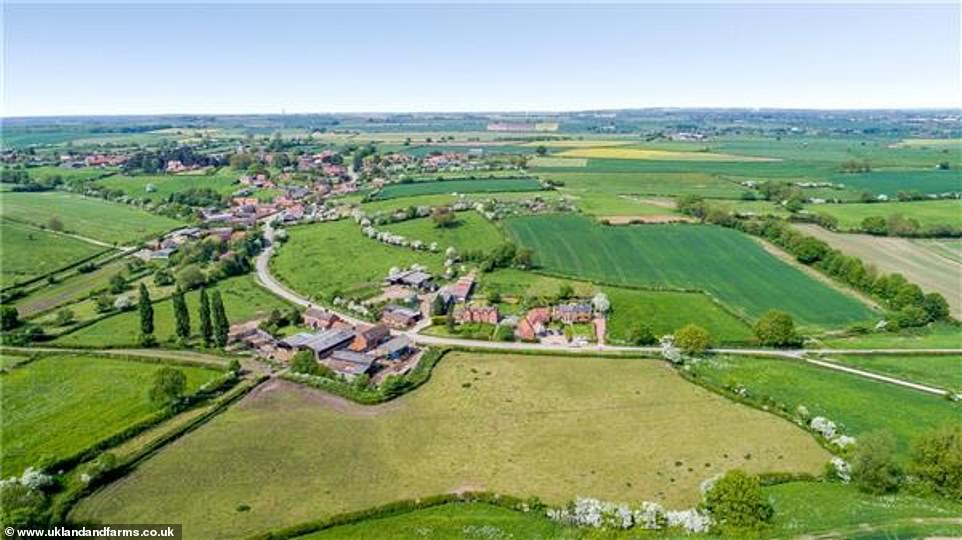 ‘Obviously it’s far less economical to have fields cut up into little strips – my sprayer is wider than some of my strips. But this is the only remaining example of open-field farming in Europe.’

A copy of a 1635 map of the village held in Oxford’s Bodleian library hangs in Laxton’s village museum – which also comes included in the sale – and explains in bright colours the strips of farming land worked by various families.

These three open fields, divided into strips, are farmed by the dedicated tenants of the Laxton estate. 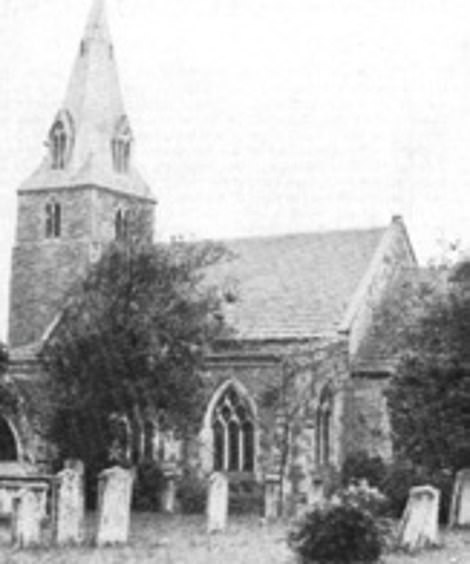 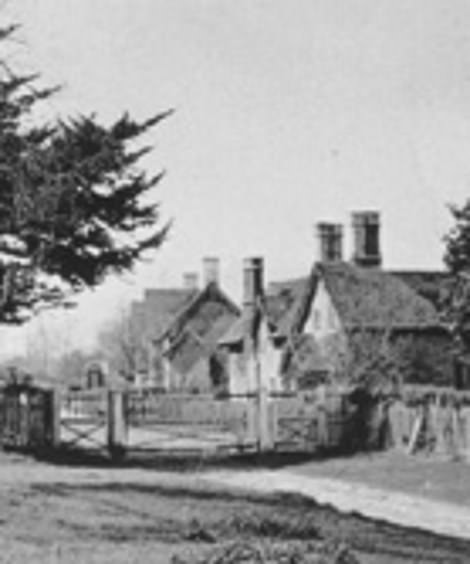 The Manor passed to John Roos in 1438 and remained in the family for nearly 200 years before it was acquired by the Earl of Kingston in 1618. The Estate passed to Charles Meadows, the 2nd Duke’s nephew. Charles Meadows was made Earl Manvers in 1808 and it stayed in the Manvers family until 1952. The church (left) is surrounded by cottages (right) and farming land 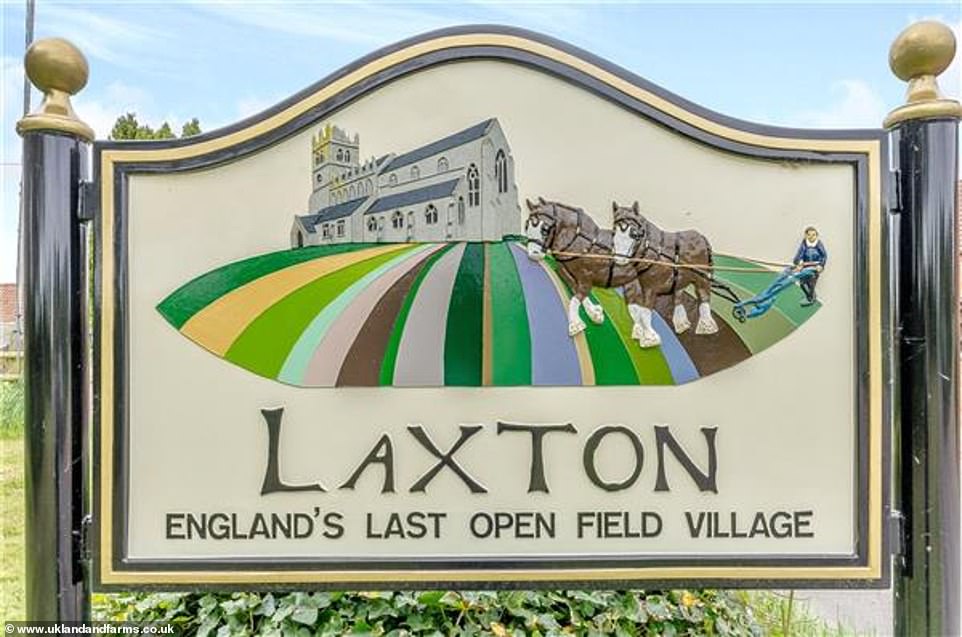 Laxton was purchased by the Crown Estate in 1981 and a Parliamentary Undertaking was given at that time that it would be The Crown Estate’s ‘intention to continue as at present organised, the Open Field System and associated customs’ 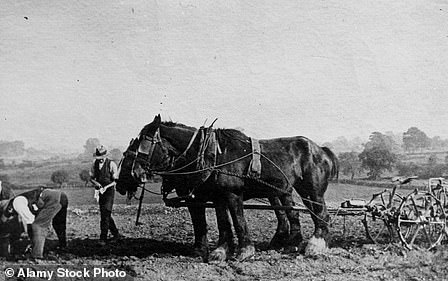 The open field system was the prevalent agricultural system in Europe during the Middle Ages and lasted until the 20th century.

The system saw each manor or village have two or three large fields that would be divided into narrow strips of land.  Individual farmers would work these strips, which were also called selions.

Usually these strips of land, about 1 acre (0.4 hectare) in size, were laid out in two or three large fields.

Each farmer in the village worked a number of these acres and the units forming his holding were scattered among those of other men.

The system was especially well adapted to the feudal manorial social system, in which the lord’s holdings were intermixed and cultivated with those of the peasants.

As a market economy started to appear this way of farming started to disappear and peasant farmers chose to work for themselves, not the lord of the manor.

In Laxton, farmers work on a three year rotation of the land. Their strip is sown with winter wheat in the first year and with a cereal crop of the farmer’s choice in the second year.  It is left not cultivated in the third year.

The three open fields, divided into strips farmed by tenants of the Laxton estate, are still managed today by a jury reporting to the manorial Court Leet. This Court can impose fines on farmers found to have strayed from their strips.

Nowadays modern machinery is used in place of horses by the farmers of Laxton. 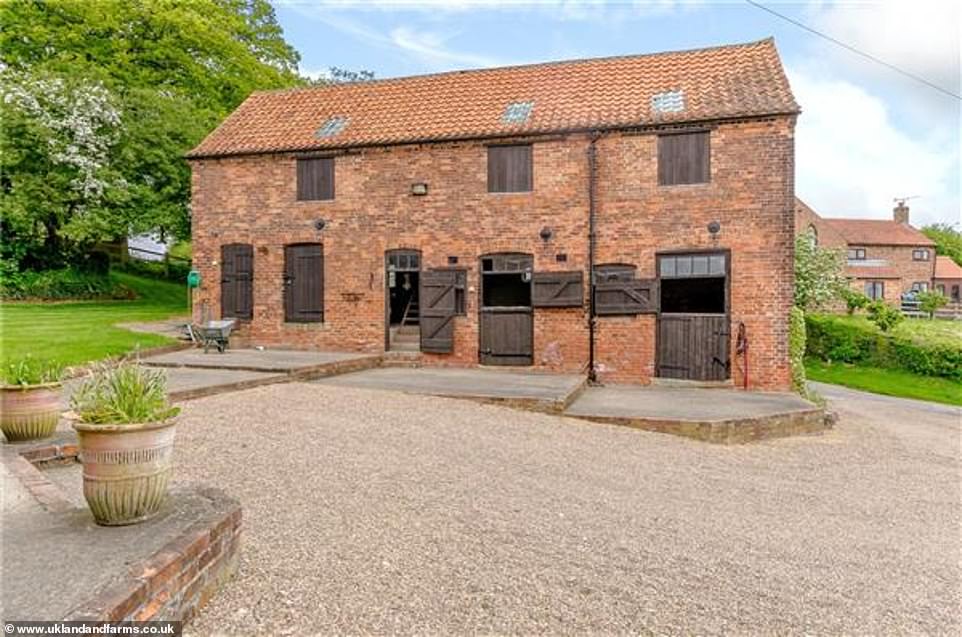 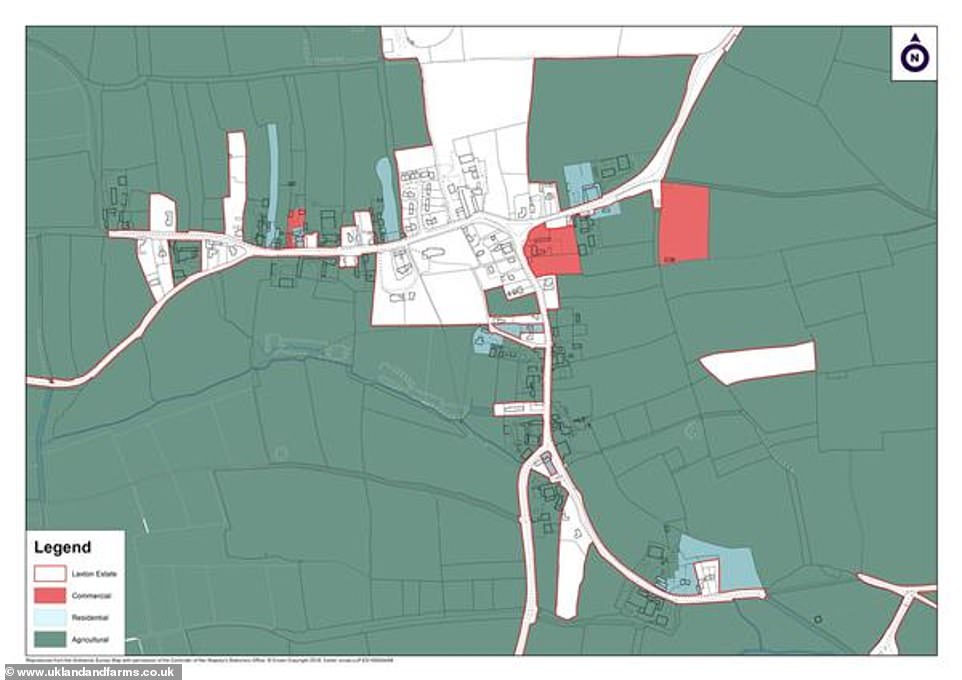 Although territory is marked on the map, out in the fields there is nothing to mark the boundaries but the farmers can rely on a traditional manorial court to keep everyone in line.

The historical estate maintains a manorial court – the lowest court in English law – to impose fines on farmers who have strayed on to others strips of land or left rubbish in the fields, reports the Guardian.

The leet court of Laxton is the only one left in the country that still has powers and can levy fines ranging from 2p to £20.

Laxton Court Leet meet twice annually, for ‘Jury Day’ and Court. Jury Day takes place on the last Thursday in November and is made up of thirteen members including a Foreman. 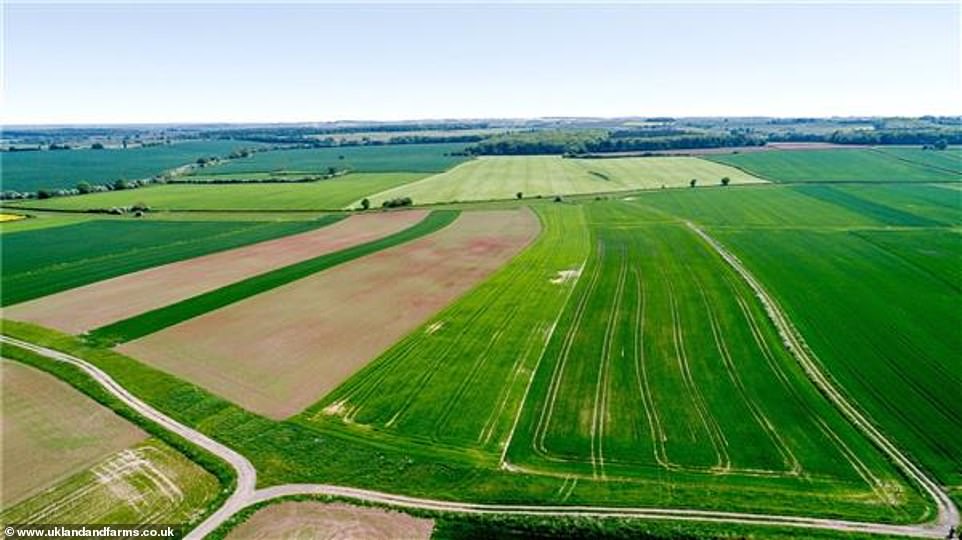 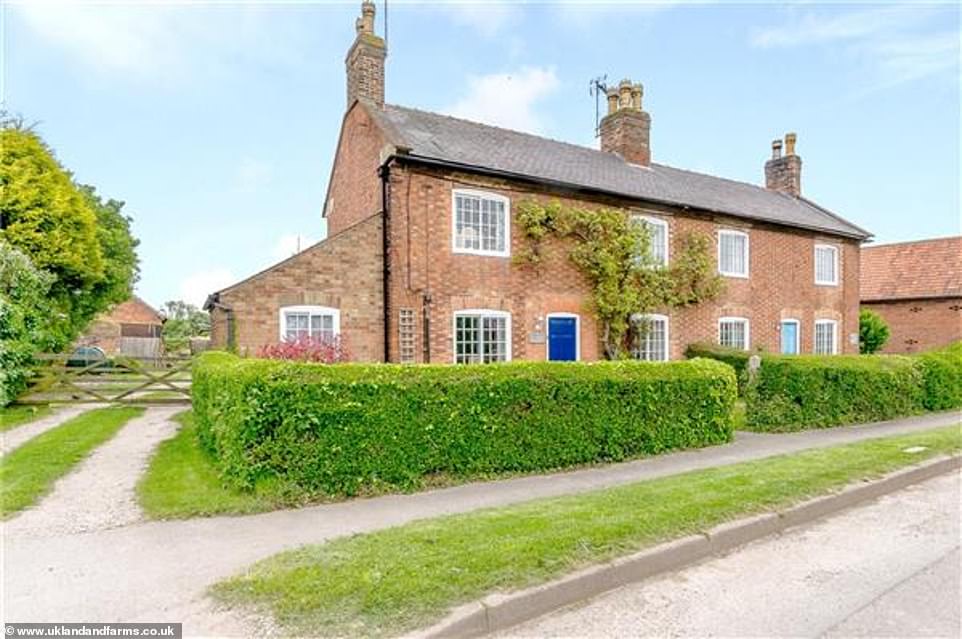 The picturesque homes, such as Blacksmiths Cottage, are included in the sale. The new owner has to show that they will maintain the traditions and open field strip farming of the land 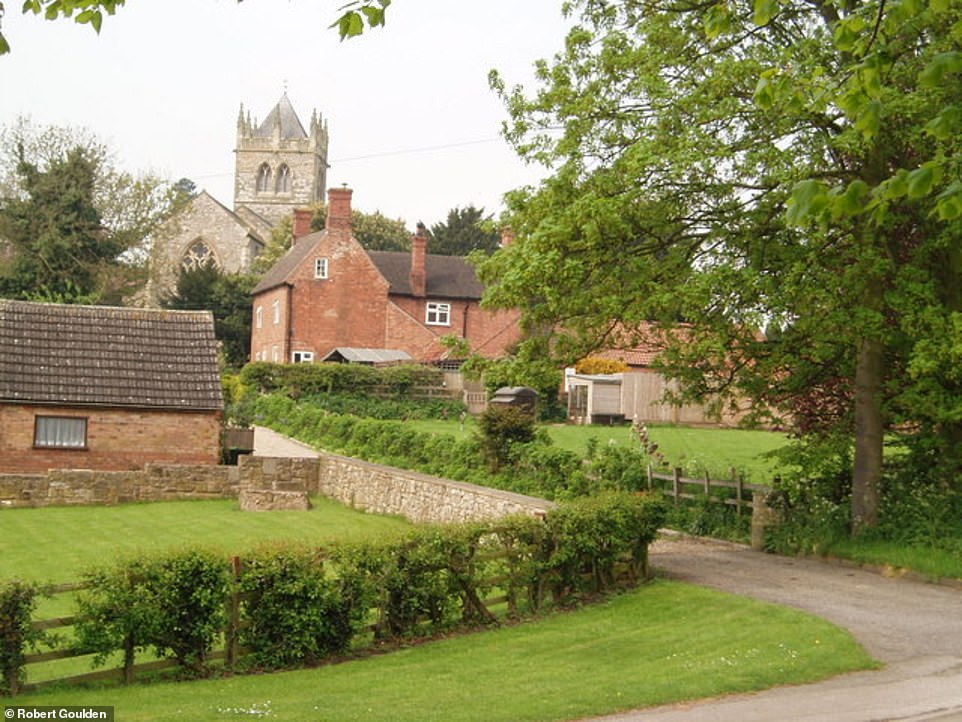 In a brochure given to potential buyers the manor which is surrounded by lush countryside is said to earn in excess of £230,000 a year and be of ‘significant’ educational interest

In a brochure given to potential buyers, the manor is said to earn in excess of £230,000 a year and be of ‘significant educational and curatorial interest.’

Whoever the new buyer may be they will have to be committed to maintaining its historical way or working.

A spokesperson for the Crown Estate said its focus would be on ‘finding an appropriate purchaser who values Laxton’s unique role and history and who is fully committed to preserving it for the future.’

The brochure on the unique estate explains how the purchaser will be ‘required to clearly demonstrate the same intention to perpetually maintain the open field system through a positive relationship with present and future tenants and other local stakeholders.’

It is thought that the estate could be worth more than £20m and possibly as much as £50m if it were not for the legal covenants and ‘sympathetic rents’.