A springer spaniel has miraculously survived after falling 230 feet down a cliff on to a Cornish beach.

The lucky animal, Dexter, chased a bird and went straight over a cliff edge while walking with owner Mark Harris at a beauty spot near Portreath, Cornwall.

Dexter fell 230 feet (70 metres) but coastguard volunteers found Dexter had not even broken any bones after shooting off during the walk.

Coastguard workers have described the pet as ‘the luckiest dog the in UK’.

Dexter pictured at the bottom of the cliff after falling 230 feet to what his owner Mark Harris thought was his death. The animal was found alive and had not even broken a bone 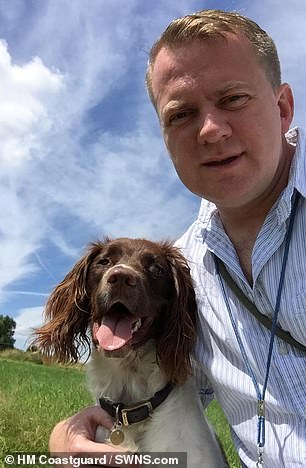 Mark Harris with Dexter, who fell from the top of the cliff after he chased a bird over the edge of the Cornish beauty spot

Mr Harris, from Cheltenham, Gloucestershire, said: ‘We climbed what must have been some 260 feet and then reached the plateau on the top of the cliffs.

‘I never took into account what he would do if a large bird flew up in front of him and disappeared over the edge of the cliff.

‘With hindsight, Dexter should have been on a lead because the sight of such a bird allowed for a red mist to descend over Dexter and he careered straight after it.

‘All my calling and shouting in that very instant could not stop what happened next… Dexter disappeared over the edge of the cliff.

‘In blind panic, I ran to the cliff’s edge hoping that there would be a ledge but there was a sheer drop to the beach below.

‘Dexter’s body was lying on the beach at the bottom of the cliffs sprawled and unmoving.’

Mr Harris thought that Dexter was surely dead, but called 999 so the dog’s body could be removed.

He continued: ‘I took a photo of him lying motionless on the beach as I needed something to cling on to and remind me of my idiocy of not following the code of walking dogs along the cliffs.

‘I was just about to call 999 when there was movement from below. First Dexter’s head moved a little. Then he raised himself up on his front legs and the back legs followed.

‘He walked slowly towards the sea and the wash lapped over his paws. He walked back towards the base of the cliffs and curled up on the sand. 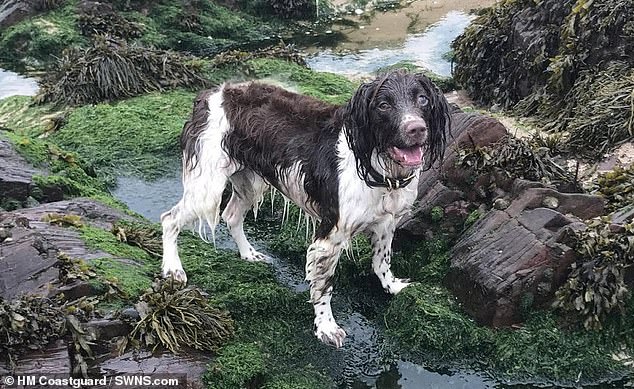 The lucky animal, Dexter (pictured), chased a bird and went straight over a cliff edge while walking with owner Mark Harris at a beauty spot near Portreath, Cornwall 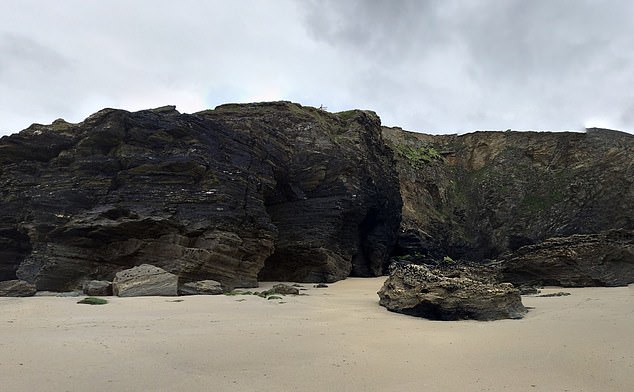 Mr Harris said he and the dog had gone on a circular walk, climbing 260 feet and then reaching the plateau on the top of the cliffs (pictured nearby)

‘The Coastguard arrived within 20 minutes – quite an incredible response time. They got me back from the cliff’s edge and took control.

‘Due to the height of the cliffs and more so their unsafe and crumbly nature, the coastguard decided to call the RNLI boat from St Agnes to ride up onto the beach and pick Dexter up.

‘I was driven down to the harbour at Portreath to take Dexter and if still alive and get him straight to the vets.

‘Dexter was carried into the surgery in his crate. I explained what happened and they took my details and I left Dexter in their capable hands.

‘The good news was that miraculously he had no broken bones. Furthermore all his internal organs were fine, apart from his lungs that had undergone quite severe bruising.

‘If he isn’t the luckiest dog in the world, I don’t know one that could be!’