Demand may have soared for rural and coastal homes during the pandemic but London still has the 10 most expensive streets in Britain, new data shows.

Based on average house prices, the list has Kensington Palace Gardens top of the pile for the 13th consecutive year, the Zoopla research reveals.

The private road, which has a number of embassies plus illustrious property owners including Tamara Ecclestone and Roman Abramovich, has homes typically worth £29,828,000.

However, despite the mega price tags, it is significantly lower than a year ago. The average price for the street is now £6million less than this time last year, when they stood at £35,991,500.

The top 10 most expensive streets are all in the capital, and include Ilchester Place where this seven-bed terrace house is for sale for £21.5million via Pereds estate agents 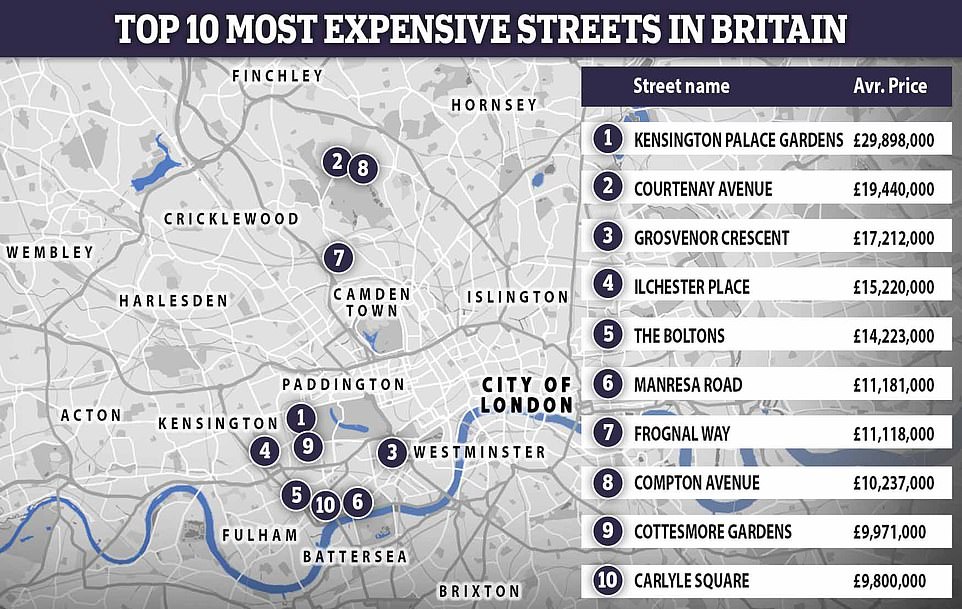 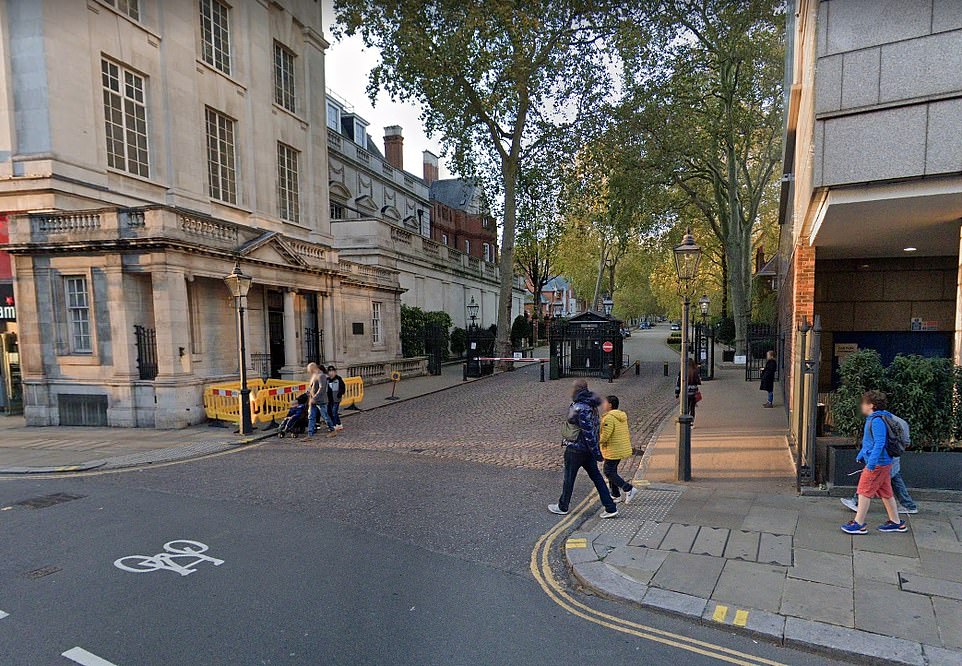 Kensington Palace Gardens (pictured) is the most expensive street in Britain, according to the research by Zoopla

While the pandemic has seen buyers flock to rural and coastal areas amid remote working and a so-called ‘race for space’, the biggest average house prices still remain in the capital.

But with lower demand in London comes a drop in average values, which extends to millions of pounds in some cases, such as with Kensington Palace Gardens.

The street also counts Kensington Palace – and with it the Cambridges – among its neighbours.

It is followed by Courtenay Avenue in Highgate, which is in second place for the third consecutive year.

Grosvenor Crescent, in Belgravia, – and just a short stroll from Buckingham Palace Gardens – is in third place with an average property price of £17,212,000.

Three new entrants in the list include The Boltons, which are in fifth place with an average asking price of £14,223,000, and Frognal Way, which ranks in seventh place and has an average property value of £11,118,000.

Carlyle Square is the final new addition to the list, with an average house price of £9.8million, according to the property website.

Rise of the £1million streets: Nearly 12,000 roads across Britain now have average prices of £1m-plus 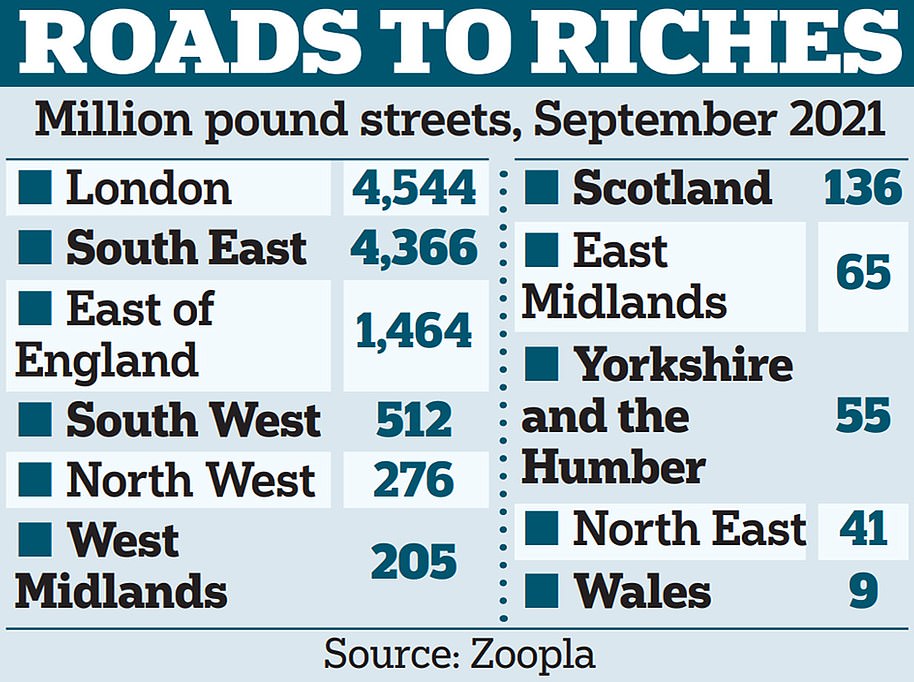 They used to be rare sights as symbols of the rich around cities and towns.

Zoopla found the South East outside London accounts for about half the increase, with 942 more £1million-plus streets over the past year compared with 262 in the capital.

This has come as an widely-predicted house price collapse after the initial lockdown froze the property market not only failed to materialise but turned into a pandemic property boom instead.

Estate agents say that a desire for more space and to get out of cities has driven the property market, particularly at the top end, with commuter hotspots on the edge of the countryside and popular rural areas running red hot. 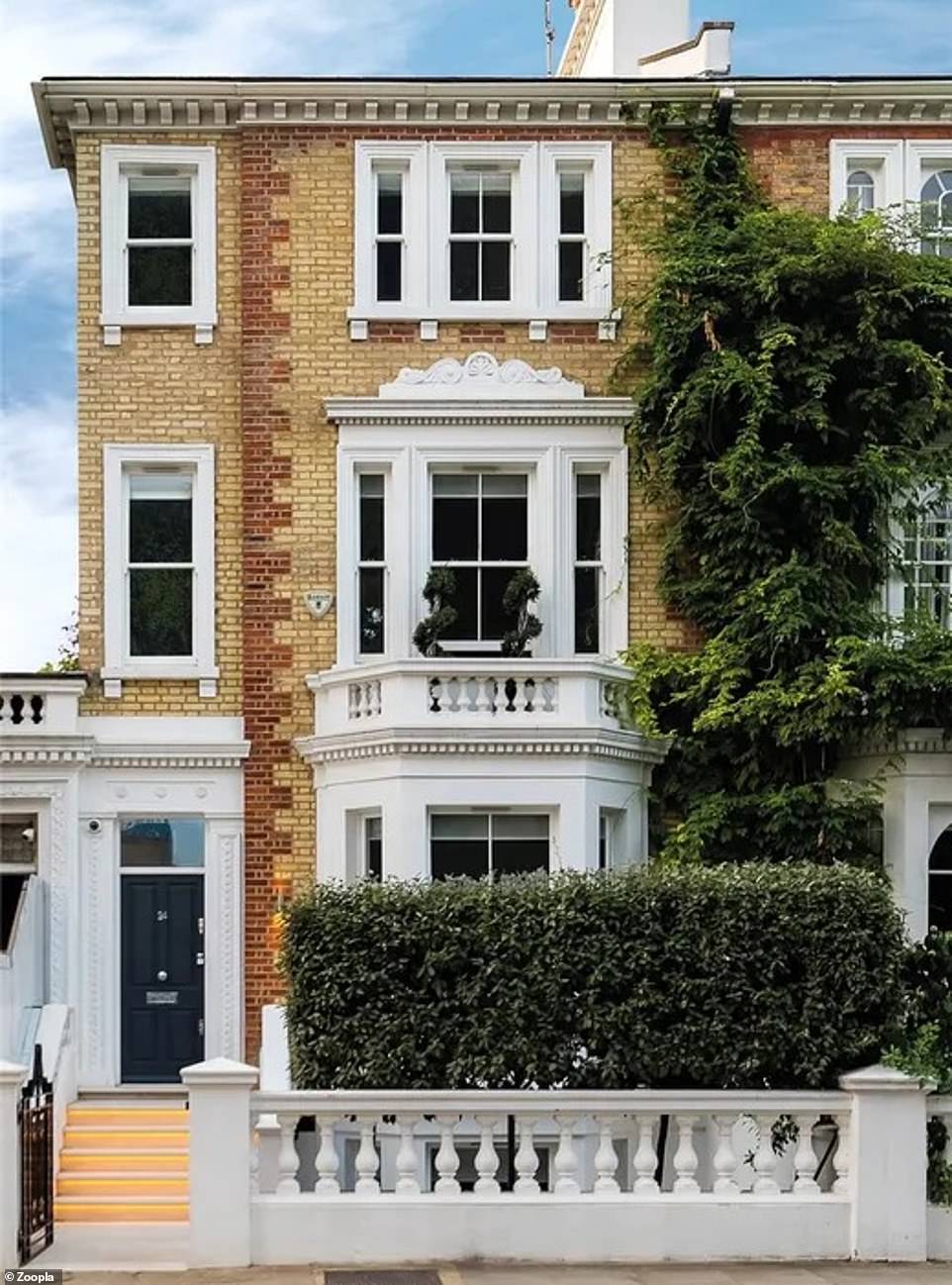 Included in the most expensive list is Carlyle Square, in London’s Chelsea, where this six-bedroom Victorian house is for sale for £15.5million via estate agents Russell Simpson

Outside of the capital

Titlarks HIll in Ascot, Berkshire, has taken the crown from Leatherhead, Surrey, to be crowned as home to the heftiest price tags outside of London, with an average property value of £8.41million.

In second place is Montrose Gardens in Leatherhead, Surrey, which is located within the exclusive Crown Estate.

Five streets in the exclusive Surrey enclave of Virginia Water feature in the most expensive list outside of London, including Portnall Rise in third place with an average property value of £6,408,000, as well as Woodlands Road East and Wentworth Drive.

Priciest streets in the largest counties

The most expensive streets in Britain’s largest counties – by population – have also been revealed by Zoopla.

Montrose Gardens in Leatherhead is Surrey’s most expensive street, while in Hampshire, Philippines Shaw in the Kent Downs is the priciest street with an average property price of £4,228,000.

Dock Lane in Brockenhurst is Hampshire’s most expensive street with an average property value of £2.41million and ranks in third place.

New additions to the list include Broadway in Altrincham, an area popular with Premiership footballers and Greater Manchester’s most expensive street with an average property price of £3.3million.

Coopersale Street in Epping is now Essex’s most expensive street with an average property type of £2,925,000.

Whirlow Park Road in Sheffield is another new addition with an average property price of £1,028,000. 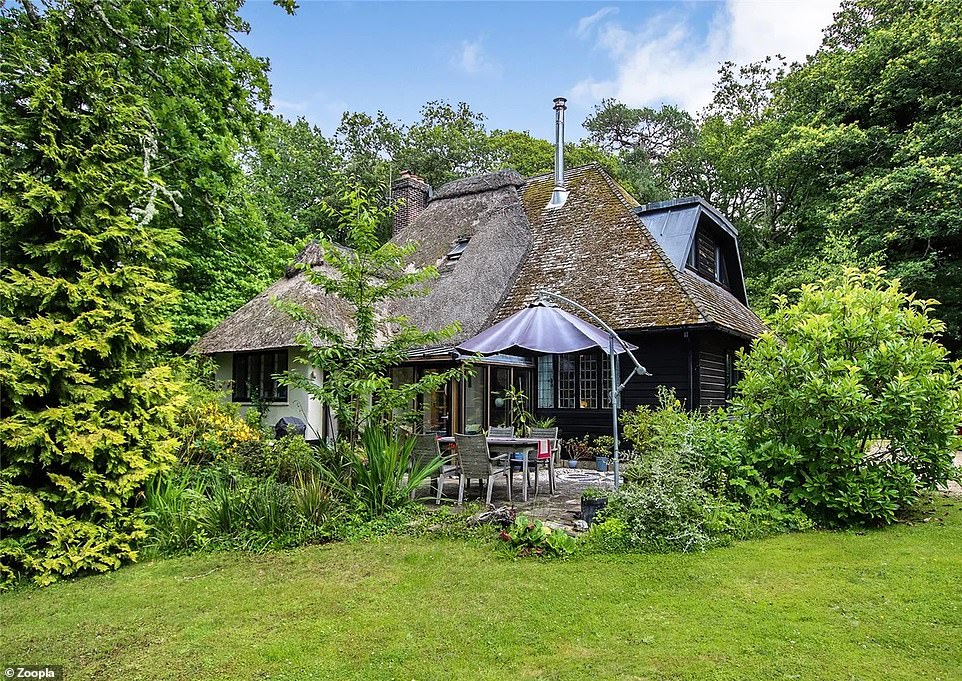 This four-bed former Edwardian coach house in Dock Lane, in Hampshire’s Beaulieu, is for sale for £1,145,000 via estate agents Fine & Country

This five-bedroom detached house for sale in Epping, Essex, is for sale for £2million via estate agents Fine & Country

Outside of the capital, Guildford in Surrey is the postal town with the highest number of most expensive streets – at 176 – and is followed by Reading with 137 and Sevenoaks with 133.

A regional analysis of the data shows that of the 11,673 streets with an average property price of £1million and above – up 18 per cent.

Of these streets, 4,544 are found in London and 4,336 are concentrated in the South East. By contrast, only nine are found in Wales, 41 in the North East of England, and 55 in Yorkshire and The Humber.

Gráinne Gilmore, of Zoopla, said: ‘This data illustrates how the type and size of properties coupled with some of the most desirable locations around the country create prime areas, resulting in some most valuable residential streets in the country.

‘London comes top when it comes to the UK’s prime markets, but the wider commuter zone in the South East is also home to some of the highest-value addresses, reflecting the size and type of housing stock in these regions.’