As the government prepares to expand no-fly exclusion zones for drones around airports, an interactive map has revealed that there have been 165 sightings near UK airfields since 2010.

An interactive map created by Esri UK shows how London and Manchester are the cities most affected, with Heathrow notching up 93. Its departures were stopped when one was reportedly seen last month.

Airports in and around the the capital have been hit with 128 since 2010 and there have been 23 sightings in Manchester.

It comes as the government announced that no-fly zones banning the use of drones around airports will be extended to form three-mile exclusion areas.

How to use the interactive map: The graphic below shows as green blobs the locations of airports across the country and the exclusion zones that must be observed. The size of the blobs is relative to the number of incidents that have occurred at the airfield in question and clicking on the arrows on the top-left of the graphic will reveal how the sizes relate to the amount of sightings. With your cursor hovering over the map, scrolling up will allow you to zoom in and scrolling down will enable you to zoom out. Clicking on any one of the dots will reveal how many drone sightings there have been in that location since 2010.

The government is set to expand no-fly zones for drones around airports following the chaos that hit Gatwick two months ago (pictured: a drone flying in Hanworth Park as a 747 prepares to land at Heathrow) 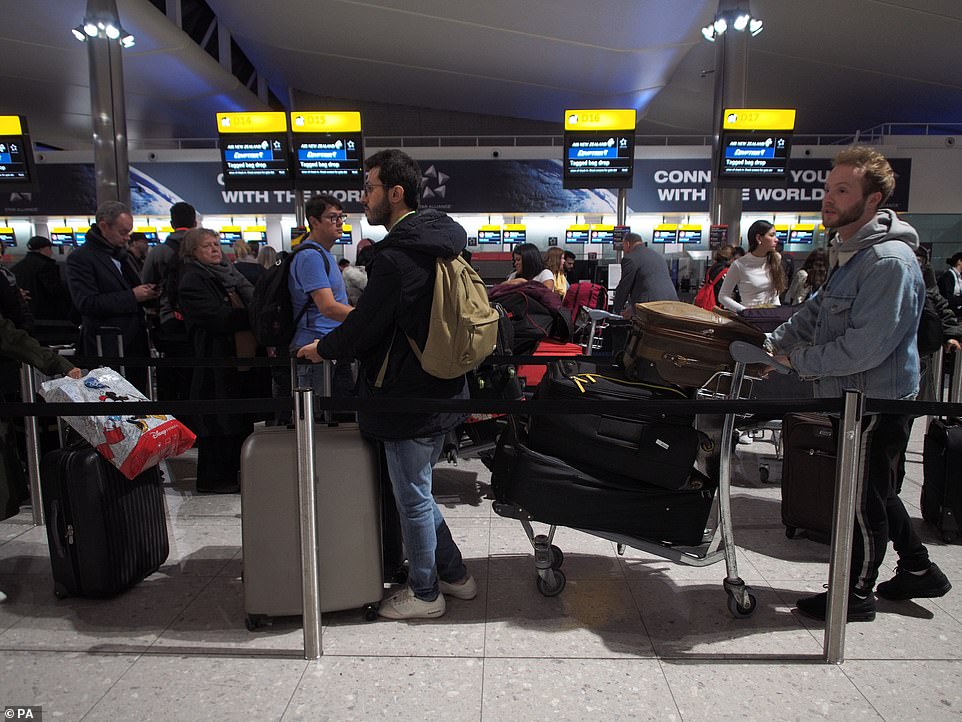 Pictured: Passengers in Terminal 2 at Heathrow airport after departures were temporarily suspended following ‘reports of drones’ at the airport last month 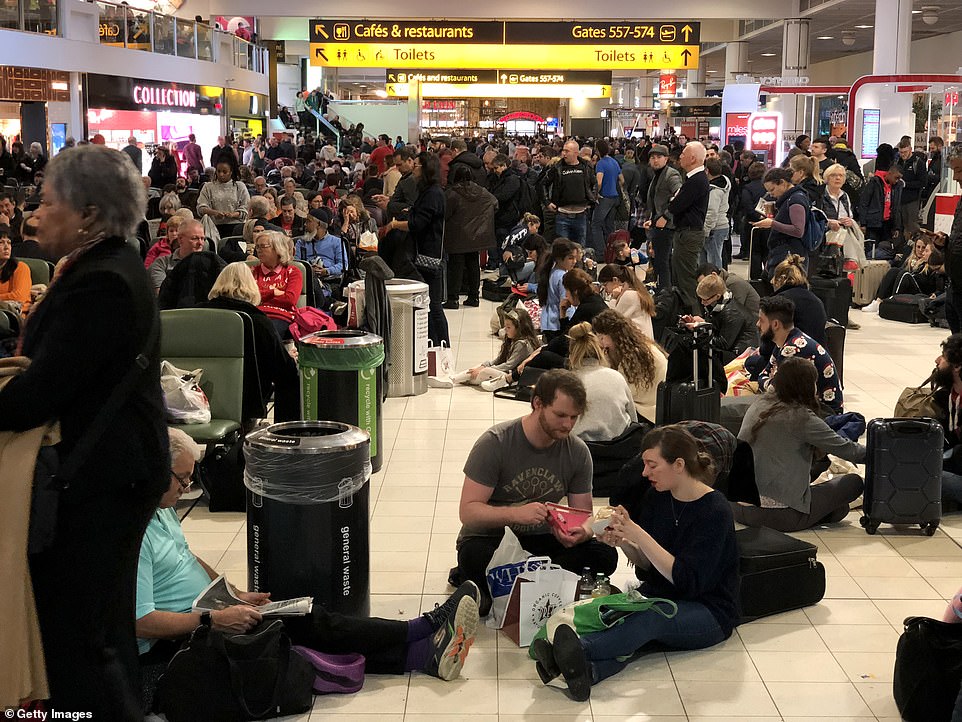 Pictured: Passengers stranded at Gatwick waited for updates on their travel options on December 20, 2018 in London after the runways were closed over drone sightings

How many drones have been spotted at UK airports since 2010?

From March 13 the government says the current 0.6-mile zones will be expanded  following disruption at Gatwick in December.

The airport closed for more than a day as drone sightings near the runway resulted in chaos for more than 1,000 flights and about 140,000 flyers.

Government officials also want to give police greater stop and search powers in the hope of tackling misuse, BBC reports.

Currently it is illegal to operate a drone above 400ft as well as within airport exclusion zones.

Anybody caught recklessly or negligently endangering an aircraft with a drone face up to five years in prison.

The expansion of stop and search powers would apply to people suspected of the malicious use of drones near airports.

The Drones Bill’s widening of the no-fly zone was welcomed by the Association of Remotely Piloted Aircraft Systems but it warned against greater stop and search plans.

‘Police will need to know exactly what the rules are and in exercising their powers do so in the right way,’ said committee member Rupert Dent.

‘We are keen it doesn’t prevent legitimate operators from operating drones in a legitimate fashion.’

Sussex Police arrested a drone enthusiast and his partner who lived near Gatwick airport following the disruption. But they were cleared of any involvement and released without charge on December 23.

The force still has not found the perpetrators, despite 130 eyewitness accounts of illegal drone flights and a reward of £50,000. 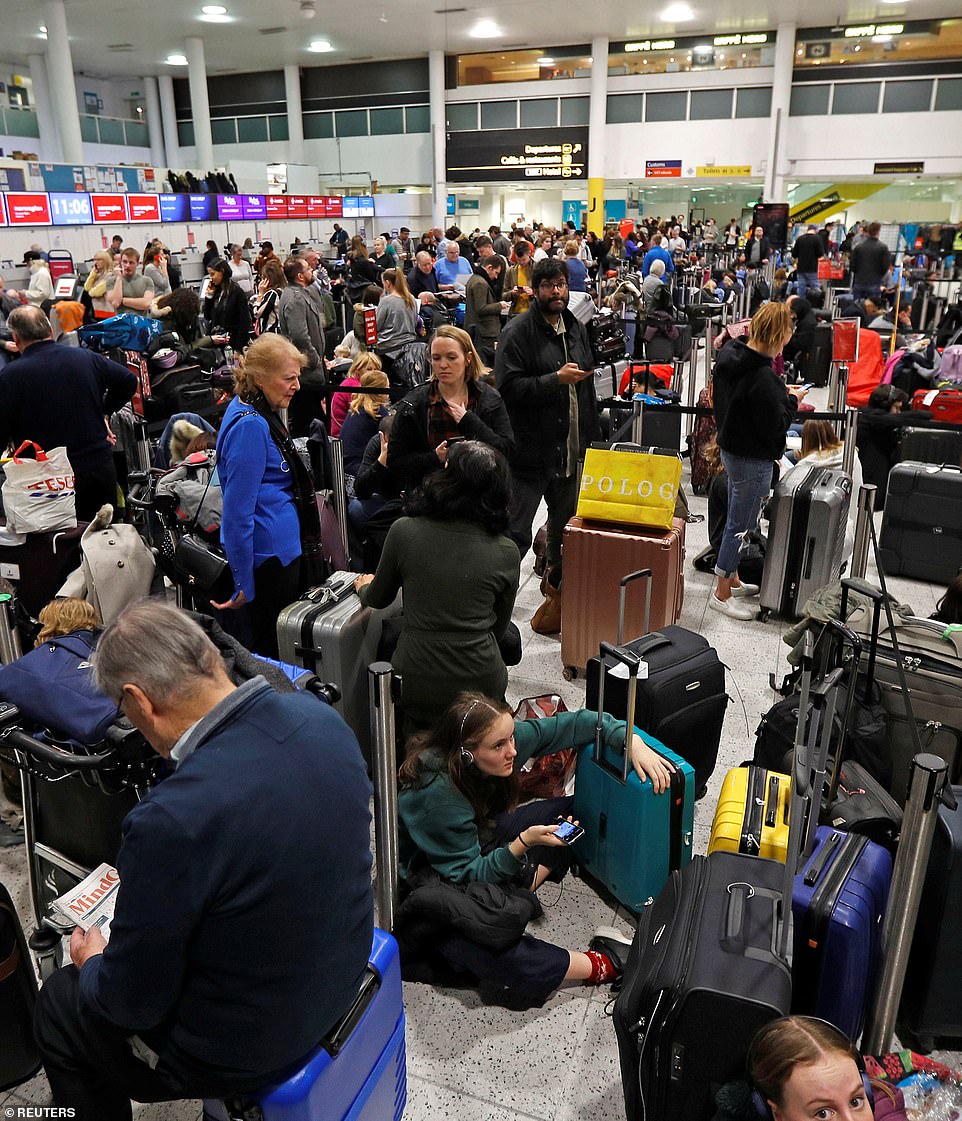 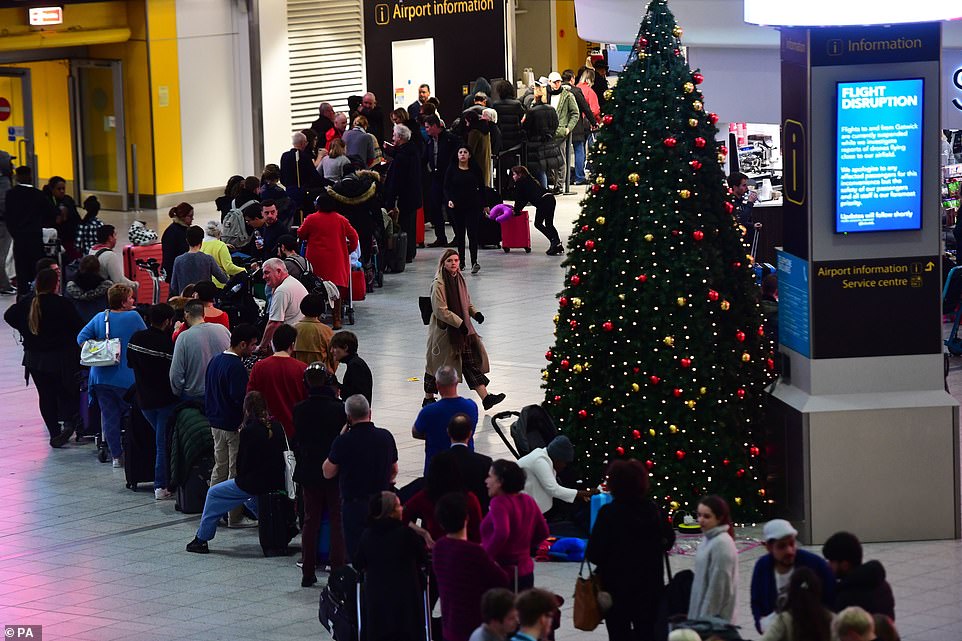 Pictured: Passengers stranded queue for information at Gatwick airport which was closed after drones were spotted over the airfield and more than 50 sightings were reported 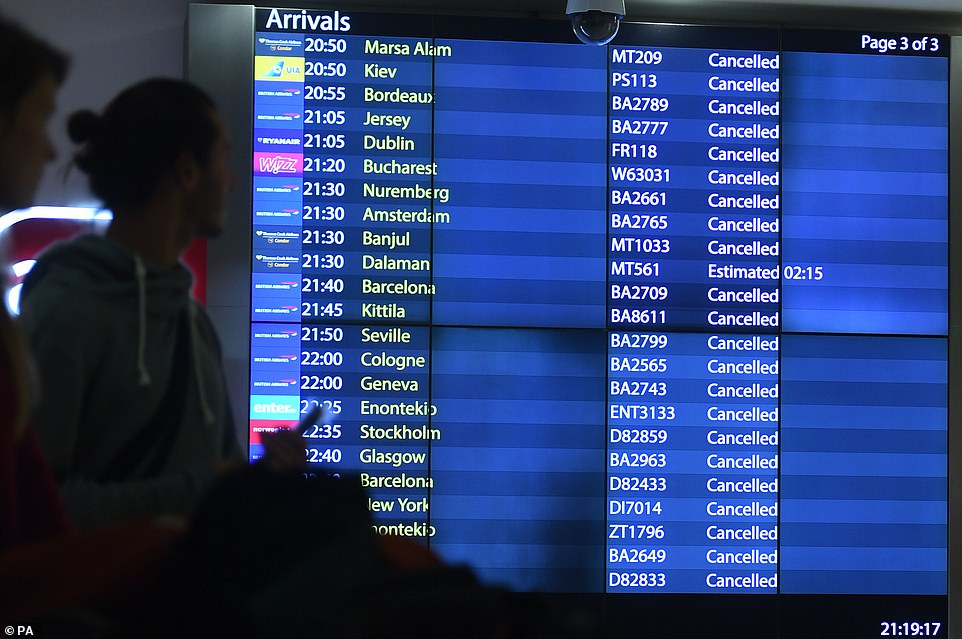 A departures board shows the mass cancellations at Gatwick just five days before Christmas, as a drone operator threw festive holiday plans into chaos for hundreds of thousands 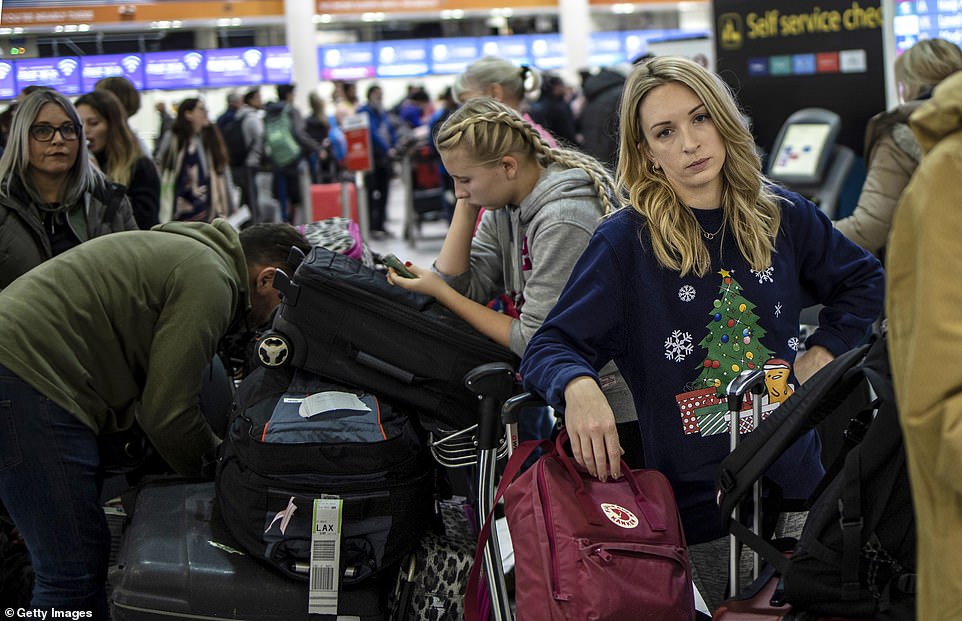 Passengers queue while waiting for announcements at Gatwick’s South Terminal, where tens of thousands of frustrated holidaymakers faced an unhappy end to their Christmas plans amid the drone chaos

But officers now believe a former airport employee was responsible for the December 19 incident, according the Whitehall sources.

A source told The Times: ‘[The drone pilot] knew the blind spots for it, where it could not be “hit”. It was clearly someone with really good knowledge of Gatwick, someone who had worked there. Hypothetically it could have been a disgruntled employee.’ 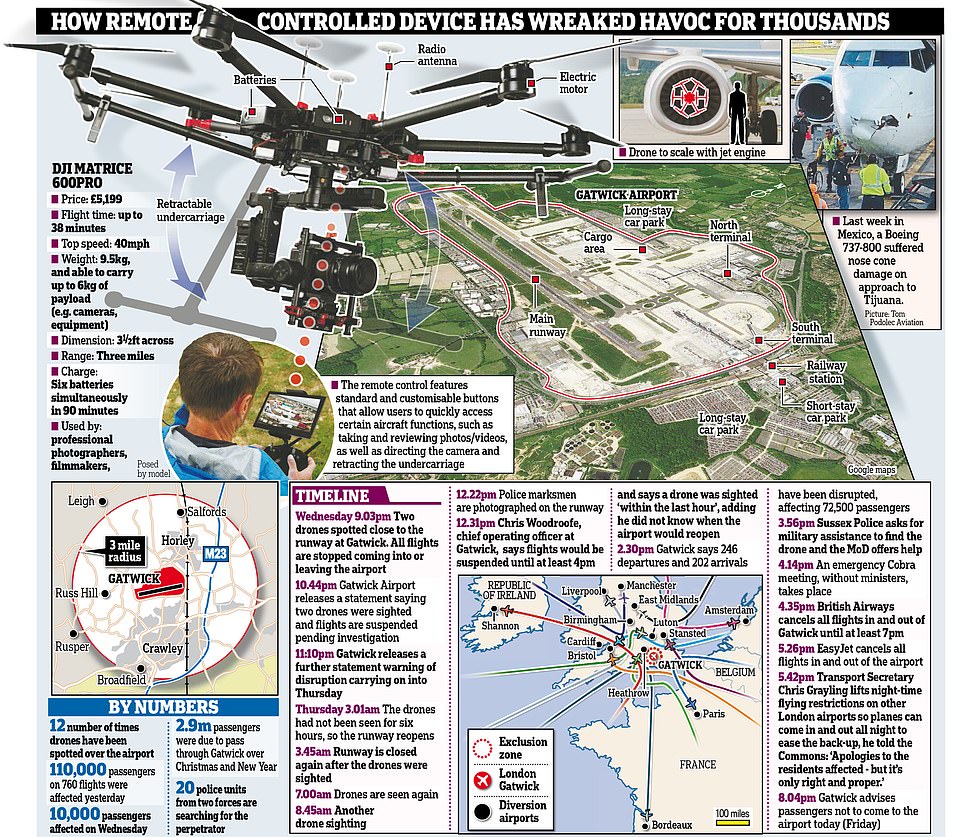 Sussex police were blasted over their mishandling of the affair after they arrested the wrong couple and added to confusion by suggesting there may have been no drone at all, before backtracking (clip from footage capturing the drone in fight) 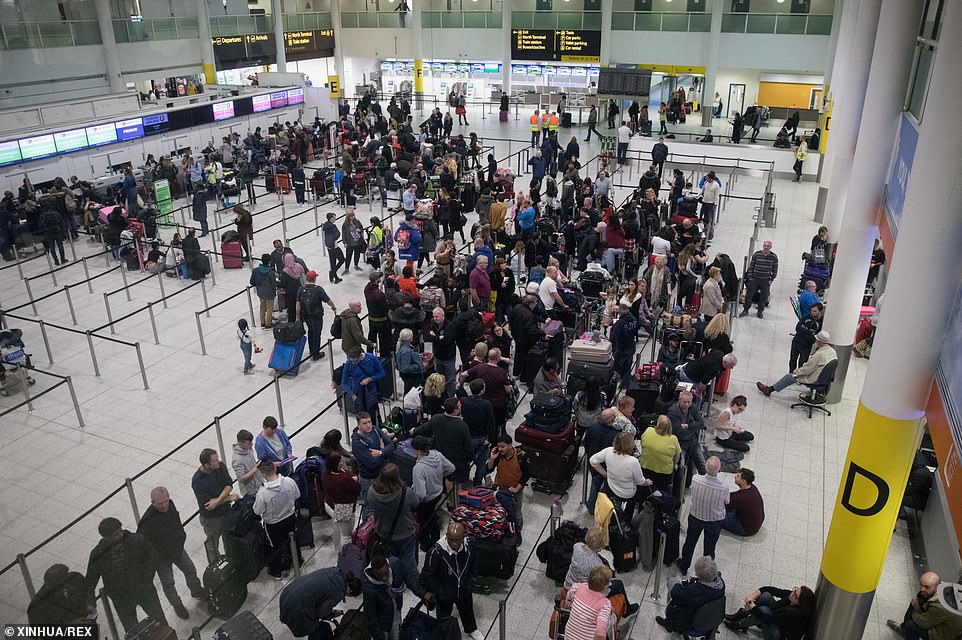 Police believe a former airport employee was responsible for the December 19 incident that saw 1,000 flights cancelled and 140,000 passengers affected 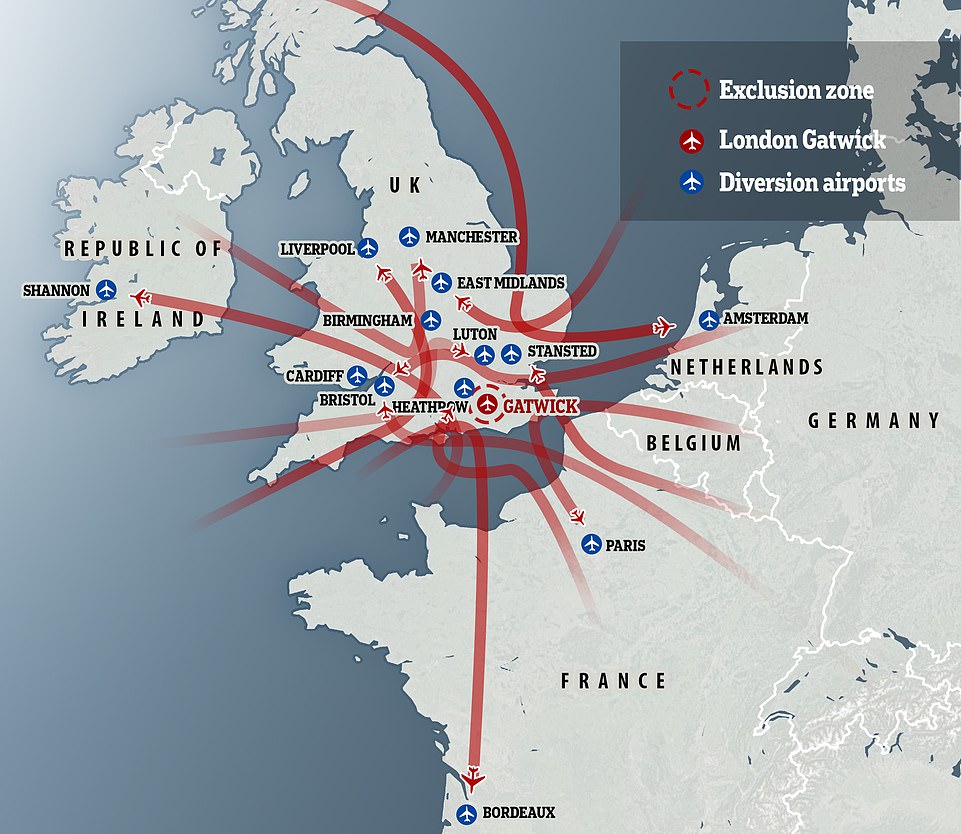 This map shows how planes were diverted to as far away as Bordeaux, Paris, Amsterdam and Shannon as well as the majority of airports in the UK