Britain’s older generation are the wealthiest and happiest ever

Today’s older generation are the wealthiest on record – and it seems the over-65s have another reason to smile.

They are also the happiest the country has ever seen, an official analysis revealed yesterday.

It found that older people are happier, gain more satisfaction and feel their lives are worthwhile in much larger numbers than the young.

They also feel less anxious and are less likely to suffer mental ill health, as well as being more content with where they live. Those who work past the usual retirement age are also happier in their jobs, with the most satisfied being those who carry on with their careers after 75.

The findings by the Office for National Statistics came from its efforts since 2010 to chart the nation’s levels of happiness.

It said older people are emotionally better off than the young and middle-aged on most measures although they do have worries about their health.

Rhian Jones, of the ONS, said: ‘Contrary to a commonly held belief that ageing involves loss and increasing burden, those aged 65 and over are faring better on many measures of social and financial wellbeing than their younger counterparts.’ Today’s over-65s are historically the best-off group of pensioners.

Almost all retired households enjoy disposable incomes of £10,000-plus a year compared to around one in five on equivalent incomes 40 years ago. 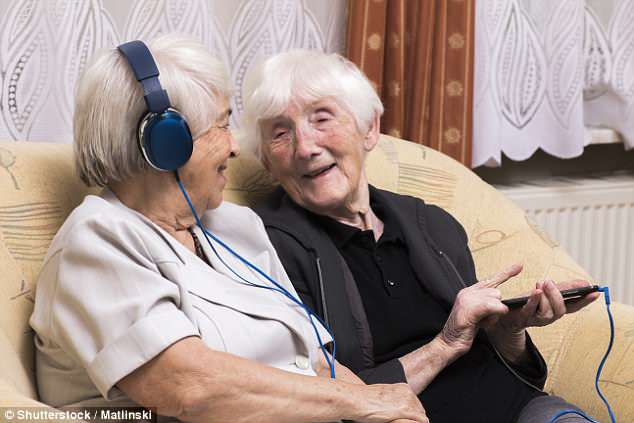 The ONS found more than four out of ten people aged 65 to 85 have a very high level of happiness. This means they gave a score of more than nine out of ten when asked how they felt the previous day. Older teenagers are the next happiest age group with up to 35 per cent regarding themselves as very happy.

However, fewer than 30 per cent of 45- to 49-year-olds saw themselves as very happy. The middle-aged traditionally struggle with demands from their jobs and finances as well as their children and parents.

Among reasons for greater happiness, the report said, is that older people are more likely to have a husband or a wife whom they can rely on.