Britain’s oldest men will both turn 110 this week, but one will no longer accept birthday cards from the Queen because there is ‘no point’.

Robert Weighton will turn 110 on Thursday. He was born in Hull on March 29 1908 and survived  both World Wars and lived in five countries in his long life.

Robert Weighton celebrates his 110th Birthday on Thursday. He will be one of the only people to reach that age in UK history 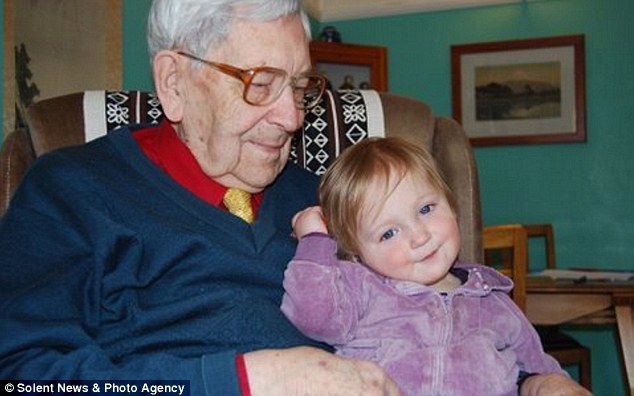 Robert Weighton with one of  his 25 great grandchildren 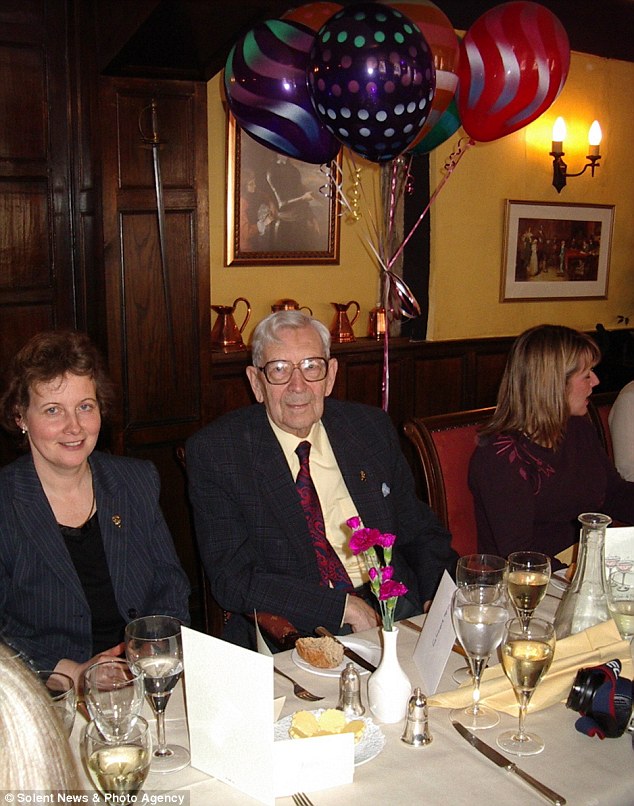 The pair, who were both born when Edward VII was King, made contact three years ago and have been sending birthday cards to each other ever since.

Neither of them are aware which one is the oldest.

Mr Weighton saw a story about Mr Smith, who has two children, in 2015 and wrote to him.

He said: ‘I have already sent my card off to Alfie and I am sure I will receive mine eventually.

‘His granddaughter is the one that is able to write and she sends the letters to me.

‘I spoke to him last at Christmas and I hope he receives my card in the next few days.

‘It is extraordinary that the two oldest men in Britain were born on the same day.’

On his 109th birthday, Mr Smith, a former farmer, told STV: ‘I can’t just do everything that I’d like to do. I’m very careful when I walk, if we go out.

‘I never thought I’d reach this age but I feel very good for 109.

‘I don’t have any pains and I sleep well. I’m not worried very much about anything.’

Mr Smith was given a ‘certificate of long service’ from the Church of Scotland last year.

Rt Rev Russell Bar, moderator of Church of Scotland said at the time ‘Of all the many people I have met during my year as Moderator, Alfred Smith is one of the most remarkable. 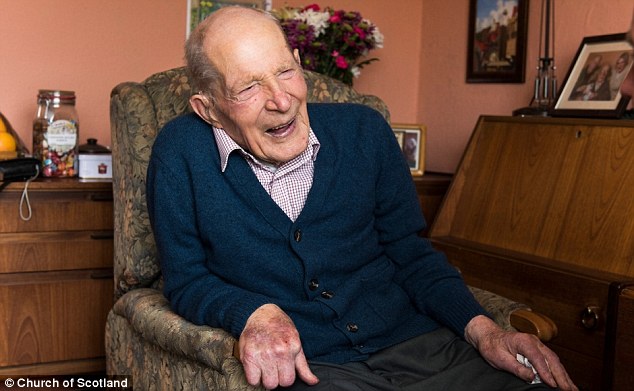 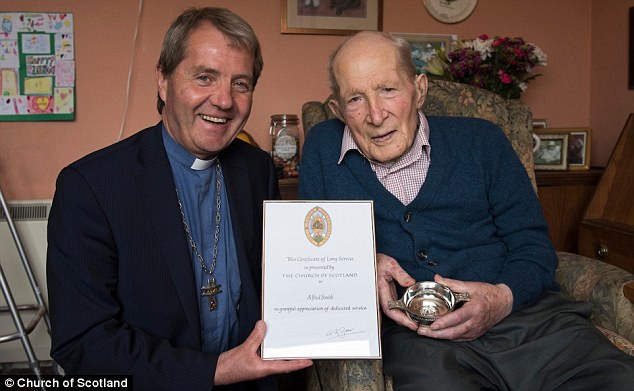 Alfred Smith, Britain and Scotland’s oldest man, was visited at his home on his 109th birthday by Moderator of the Church of Scotland, Rt Rev Russell Barr

‘At 109 years old he retains a lively sense of humour, a continuing interest in life, including the life of the church, and he is a great story teller.

‘It was a privilege to meet him and some of his family and to offer him my warmest congratulations.’

Mr Smith was born in Invergowrie, Scotlandt, the fifth of six sons.

He emigrated to Canada, along with four of his brothers, in 1927 but returned after five years and then worked as a lorry driver.

During the Second World War Mr Smith was in the Home Guard, and married Isobel when he was 29. They raised two children, together but Mrs Smith died 15 years ago, aged 97.

Mr Weighton, who was born before women had the vote, the Pearl Harbour attack, the sinking of the titanic, and the Russian revolution now lives alone in Alton, Hampshire.

The great-grandfather has started turning down birthday cards from the Queen after receiving too many.

However, Mr Weighton says he would begin welcoming cards from the Royal Family if there was a change of monarch during his lifetime.

He said: ‘I am not having any more from the Queen. There is no point having one every year. 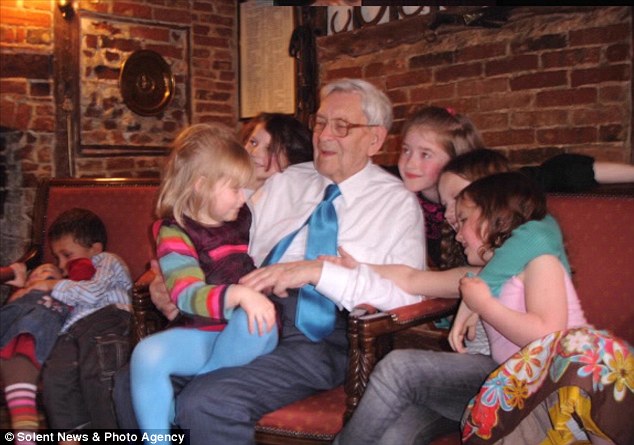 Robert Weighton with six of his 25 great grandchildren in 2008 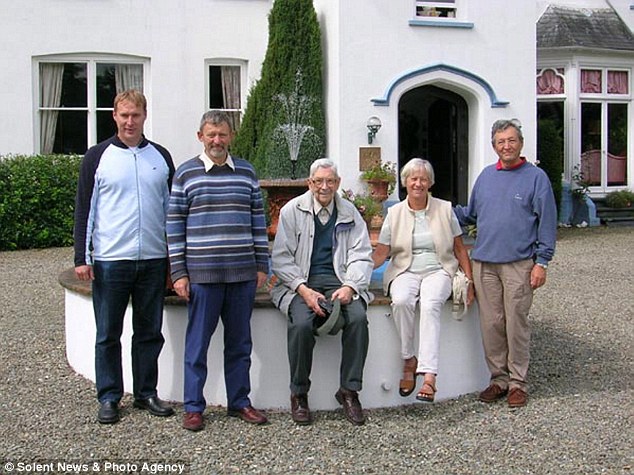 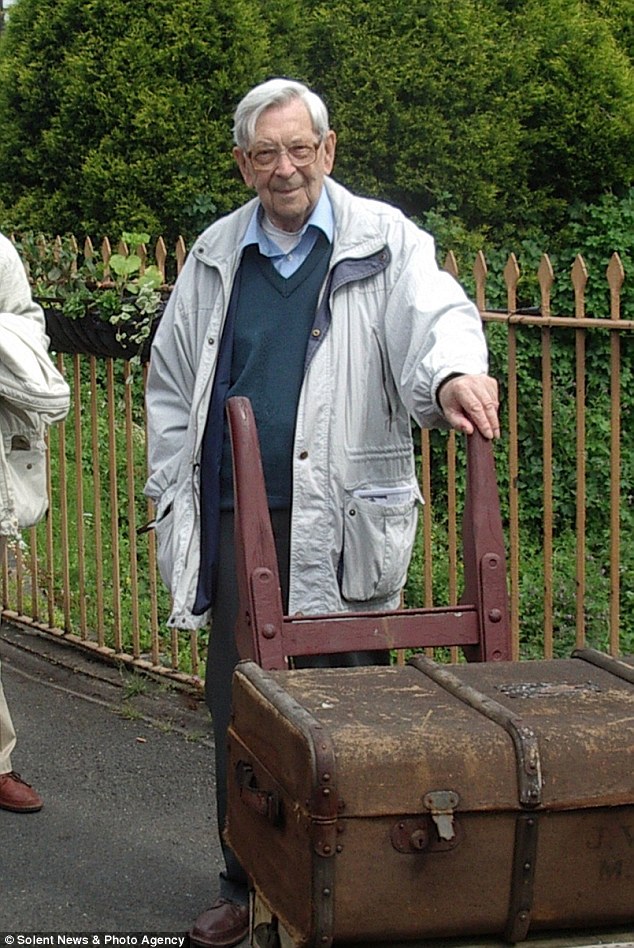 ‘I have been sent quite a lot since I turned 100, but it is just another day for me. I celebrate all days the same now.’

Mr Weighton said his final card from her majesty was for his 107th birthday which showcases her smiling directly at the camera.

‘I want to remember her by that picture, she looks very relaxed.’

On Thursday, he will join the elite list of British supercentenarians, describing people who have lived to at least 110.

The Gerontology Research Group, that validated their age claims says that have been about 140 people reach the age of 110 in British history.

There are five living British supercentenarians, the oldest of whom is Bessie Camm from Rotherham, born 20 June 1904, aged 113.

As of Thursday, there will be two more on the list. 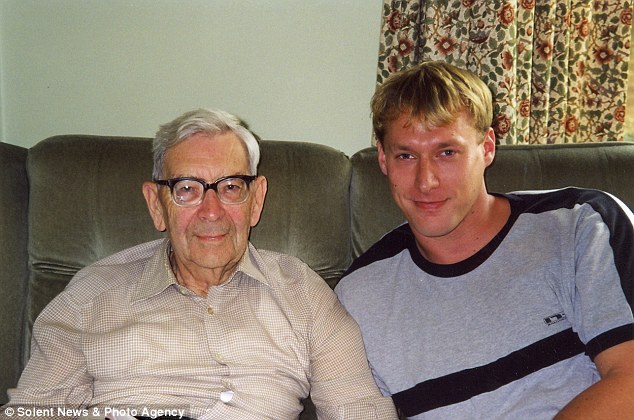 Robert Weighton with his grandson Magnus in 1997 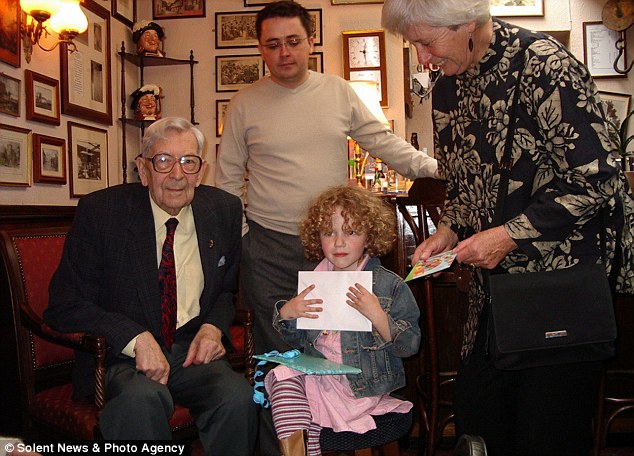 Mr Weighton is still mobile and attends coffee mornings and clubs with other local people.

He added: ‘I walk to Waitrose a couple of times a week for my weekly shop. I only need to pay £5 per day for my food.

‘I do a lot of speaking, I go to clubs and schools to talk about my life and what it was like during the war.’

Unsure what the secret is to his longevity, Mr Weighton has lived in Japan, Taiwan, Canada and the USA in his lifetime.

While in Hong Kong in 1937 he married his wife Agnes, who he met while teaching English in Taiwan.

With his wife, who passed away in 1997, Mr Weighton spent much of their retirement volunteering as marriage councillors and helping at youth groups.

He was a refugee in Canada during World War II as his family were unable to return to Britain in 1939.

Mr Weighton’s ability to speak Japanese meant he was hired by the British Political Warfare Mission to decipher enemy messages, and also worked to disrupt the morale of the Japanese.

He added: ‘I have seen the whole world fall apart twice. 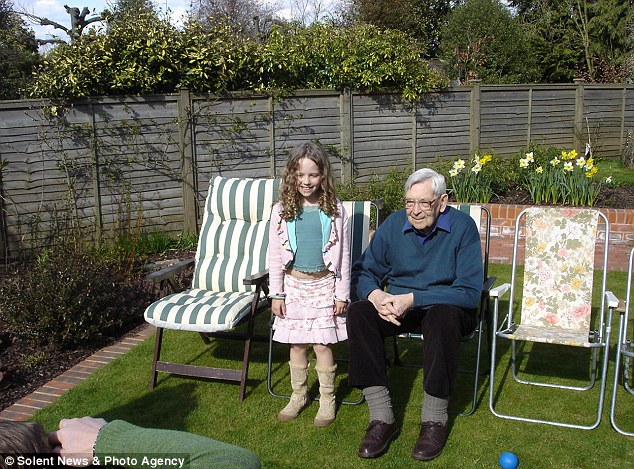 Robert Weighton with Great granddaughter, Poppy, born on the same day 90 years apart, Poppy will be turning 20 on Thursday, picture in 2006 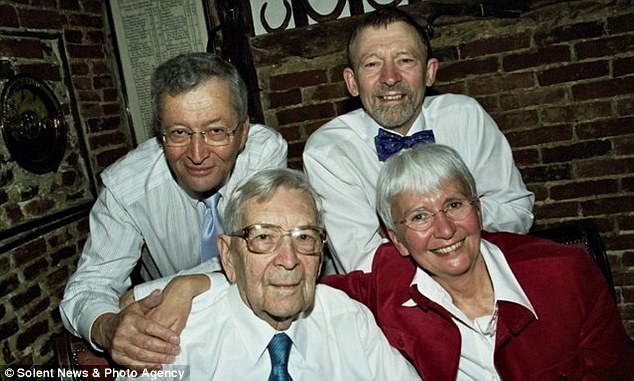 ‘The world is in a state of uncertainty right now. Nobody knows what is is going to happen about Brexit, Russia or in Syria. It is a very uncertain future.

‘They are the ones who ought to get the attention, not myself. I have never faced starvation like some of them.’

Mr Weighton does not consider his age to be an ‘accomplishment’ and says each year is just as important as the last, adding: ‘It is not something that I have worked for. It is just something that comes around, sort of like measles.’ 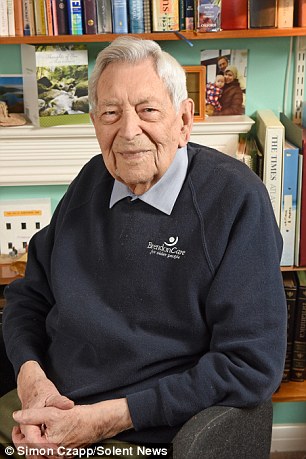 Robert Weighton at his home in Alton, Hampshire, he says he has no idea why he has lived so long

England’s oldest man, Robert Weighton, turns 110 this Thursday – and will exchange cards with his exact contemporary in Scotland, Alfred Smith.

The pair learnt only three years ago that they were born on the same day in 1908, when Edward VII was king.

Mr Weighton was born in Hull, one of seven children of a vet, and 110 years on is still very much his own man.

He lives in his own independent flat in a care centre in Alton, Hampshire, walks to Waitrose a couple of times a week, budgets £5 a day for food, and takes a keen interest in current affairs. That is partly because he has seen just how bad the news can be.

His first memory is of being ill with mumps in 1913 – and a year later seeing fires started by a Zeppelin bombing raid in the First World War.

In an age when education after 14 often had to be paid for by parents, his father could afford to keep him at school until 16, then complete a marine engineering apprenticeship.

But when he qualified the Great Depression was taking hold, so he left for the Far East. After two years in Japan learning the language, he moved to a job teaching English in a Taiwanese missionary school.

He found a wife too, Agnes, marrying her in Hong Kong in 1937. Their first son David was born the following year.

When the Second World War started they took young David first to Canada, then America – and were there when Japan attacked Pearl Harbor.

‘Americans had regarded the war in Europe as something they didn’t want to get mixed up in,’ he said. ‘Pearl Harbor changed that absolutely.’

His skills as a Japanese speaker won him a job in the US with the British Political Warfare Mission, producing propaganda and deciphering enemy messages. He returned to England in 1946 – by which time two more children, Peter and Dorothy, had arrived.

‘I went back to engineering, then lectured at City University in London for 25 years,’ he said. ‘It was a technological college, none of the high-brow subjects they have now.’

He and Agnes retired to Alton. She died in 1995 aged 86, and son Peter died in 2014. Mr Weighton now lives in a care complex of 46 privately owned flats, with wardens on hand to help when needed.

A birthday party is planned, but he denied that living to 110 is an achievement, saying: ‘All I’ve got to do is sit in a chair.’

He has also tired of the congratulatory messages from the Queen, saying she ‘looked a bit miserable’ in the pictures.

He says the current global situation is ‘a total muddle – you’ve got Trump, Putin, and political stalemate in Britain’. On Brexit he is a remainer, but adds: ‘I’ve not lost my pride in being a Yorkshireman or British.’

Sadly for those seeking advice on longevity, he had nothing to offer, saying: ‘I have absolutely no idea why I’ve lived so long. I just haven’t died yet, that’s all.’ 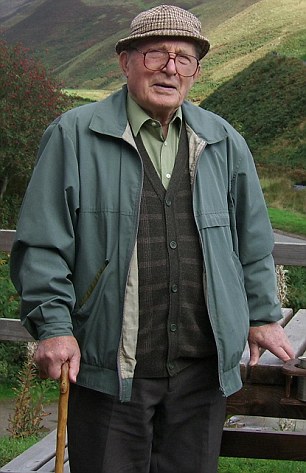 Alfred Smith, pictured, is the oldest man in Scotland and says porridge is the cause of his long life

Like many a good Scotsman, Alfred Smith is certain about the cause of his long life – porridge.

Talking of his great longevity, he said: ‘Porridge is helpful, and having a job you enjoy’, going on to admit that he treats himself by adding both sugar and milk to his breakfast.

He adds: ‘I do ask myself – why me? Why have I lived so long when others haven’t?’

Mr Smith was born the fifth of six sons to farmers John and Jessie Smith in the village of Invergowrie, near Dundee. After education at the local primary school he moved on to the selective Harris Academy in Dundee – now a comprehensive – which he left at 14.

After school, the inter-war years were hard – and at the age of 19, in 1927, he and four of his brothers emigrated to Canada together to seek their fortune.

He and one of his brothers set up their own farm in Govan, Saskatchewan, choosing the location because it ‘sounded Scottish’. Sadly they were cursed with tough weather including droughts, hail and washed-out crops.

Five years later Mr Smith returned to Scotland, following the death of his father, and started earning a living by driving lorries for his brother George as they took over the family farm.

In 1937 he married wife Isobel, and she helped him as moved on to running his own farm in Perthshire, where they raised their children, Irene and Allan.

Farming was an important business in the Second World War, with food supplies to Britain being attacked by the Germans, so Mr Smith kept at it, while serving in the Home Guard.

Mr Smith himself lived alone until around then, but since a fall has shared a home with his daughter Irene Noble, a sprightly 80-year-old, in St Madoes, Perthshire. He has two grandchildren, with one, grandson Iain Smith, having followed in his father’s footsteps by both emigrating to Canada and marrying an Isobel.

He has also maintained links with religion. First a member of the Free Church, he switched to the Church of Scotland in 1945 and has remained a worshipper to this day.

Last year he was honoured to have a birthday visit from the Moderator of the national church’s General Assembly, the Right Rev Russell Barr.

Mr Smith said: ‘It is wonderful to have a visit from the Moderator. How he finds time to see me is quite something. I have always loved the church as it has given me so much over the years.’

He still enjoys a game of Scrabble, and is considered so remarkable that US scientists at Boston University contact him every year to do a blood test and ask him if he knows who the Prime Minister is. He does.