A British Airways jet crashed into an Emirates plane on a runway at Dubai airport on Monday night.

The six-month-old Airbus A350 was reversing from the gate, about to take off on a return flight to London, when it smashed into the Emirates Boeing 777 that was parked behind it.

Images from the collision show crumpled metal on the Boeing’s horizontal elevator.

Pictured: The two planes at the time of collision on the runway of Dubai airport on Monday night

The Sun reported that the images were posted to pilot forums, where aviation staff joked about the incident, using the hashtags ‘Stay2metresapart’ and ‘Fly To Collide’, mocking BA’s Fly To Serve slogan.

The plane, which had no passengers on board at the time of the accident, has a tail camera, but it faces the other way.

The pilot would have been relying on ground staff to guide them along the runway.

Both planes were briefly checked over by engineers.

A BA source told the Sun: ‘Technically the pilots are trained to keep looking back during push back.’ 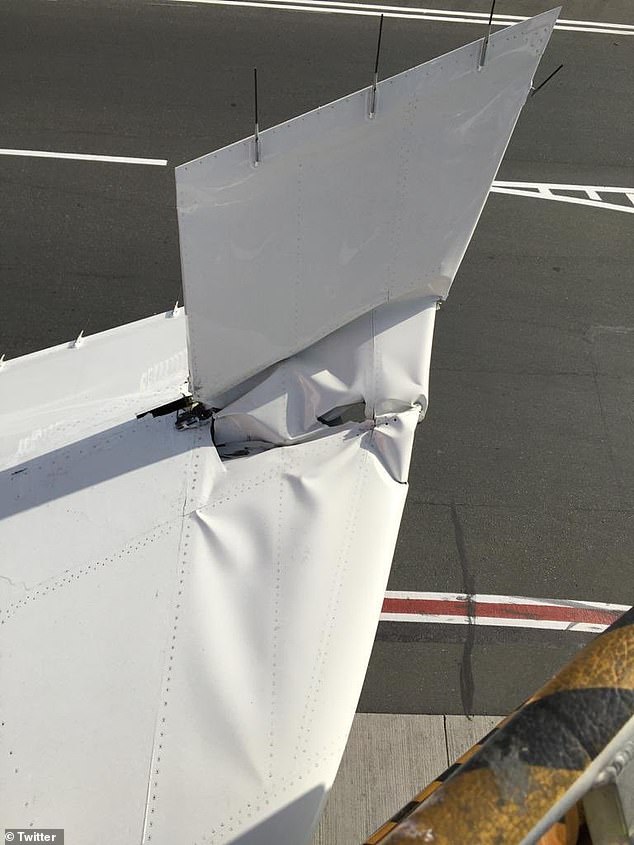 Last night BA said an investigation had been launched and in a statement added: ‘Safety is always our highest priority. The aircraft will be fully assessed before it is cleared to fly.’

British Airways become the latest airline to send its aircrafts to a so-called ‘airport graveyard’ earlier this month, as the company tries to reduce its operations amid the coronavirus pandemic.

The airline is set to move its Airbus A380 aircraft to France’s Chateauroux Centre Marcel Dassault Airport in order to prevent its planes from rusting while they are inactive during the Covid-19 crisis.

The move comes just a week after British Airways transported six of its twelve A380s to the French airport in order to be stored.