British Airways announces £3.8billion loss and warns passenger numbers will not recover until 2023

British Airways owner announces £3.8billion loss and warns passenger numbers will not recover until 2023 after plunging by 98% during lockdown

The owner of British Airways has announced a £3.8 billion loss and warned that passenger numbers will not recover until 2023 after plummeting by 93 per cent during the pandemic.

Parent company IAG said this is down from a £0.9 billion profit in the same six month period a year ago. Revenue was £4.8 billion some 56 per cent lower than 2019’s levels.

They added it will take until at least 2023 for passenger demand to recover to pre-coronavirus levels.

In April it announced that 12,000 British Airways jobs could be cut and currently half of BA’s 45,000 employees are currently on furlough.

Chief executive Willie Walsh said: “All IAG airlines made substantial losses. As a result of Government travel restrictions, quarter two passenger traffic fell by 98.4% on a capacity reduction in the quarter of 95.3%.

“We have seen evidence that demand recovers when Government restrictions are lifted.

“Our airlines have put in place measures to provide additional reassurance to their customers and employees on board and at the airport.

“We continue to expect that it will take until at least 2023 for passenger demand to recover to 2019 levels.”

IAG announced a plan to strengthen its balance sheet by raising £2.49 billion through a proposed capital increase.

The firm said it is “restructuring its cost base to reduce each airline’s size”.

Mr Walsh said customers with pre-existing bookings are continuing to fly to and from Spain despite the UK Government’s decision to advise against non-essential travel to the country and re-impose quarantine requirements for people returning.

He told reporters: “People who have had bookings, they appear to continue to be travelling to and from Spain.” 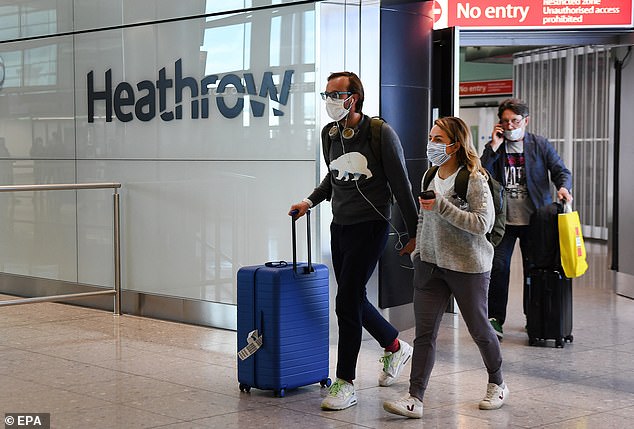 Passengers arrive at Heathrow Airport on July 30. The government has implemented a number of recent travel restrictions, including for Spain

He went on: “Our bookings are being suppressed by Government restrictions. When the restrictions of removed we see a significant increase in bookings.”

Mr Walsh said the scale of the challenge faced by the airline industry after 9/11 in 2001 and the global financial crisis in 2009 is “much smaller” than what it faces due to the pandemic.

“Anyone who believes that this is just a temporary downturn and therefore can be fixed with temporary measures, I’m afraid seriously misjudges what the industry is going through.