Passengers have slammed British Airways after an ’email error’ meant some were wrongly told their flights were cancelled – meaning they ended up with two flights to the same place.

The ‘error’ followed an announcement that pilots will strike for three days next month – throwing weddings, honeymoons and holidays into doubt as a raft of flights are cancelled for September 9, 10 and 27.

But it has now emerged that some passengers – the exact number has not yet been confirmed – were wrongly told their flight would be cancelled and they were advised to rebook.

‘We are sorry for any confusion and inconvenience this has caused.’

The ‘error’ followed an announcement that British Airways pilots (pictured) will strike for three days next month – throwing weddings, honeymoons and holidays into doubt as a raft of flights are cancelled for September 9, 10 and 27

Passengers have slammed British Airways after an ’email error’ meant some were wrongly told their flights were cancelled (above and below, angry passengers taking to Twitter) 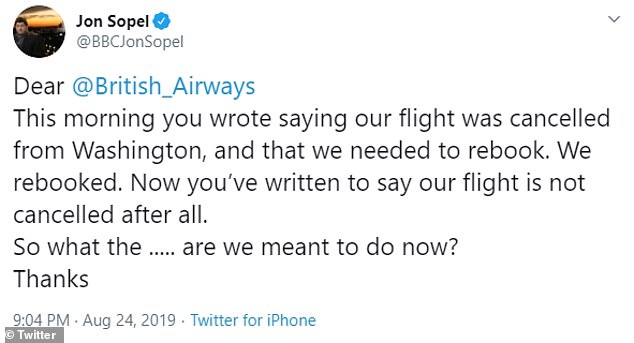 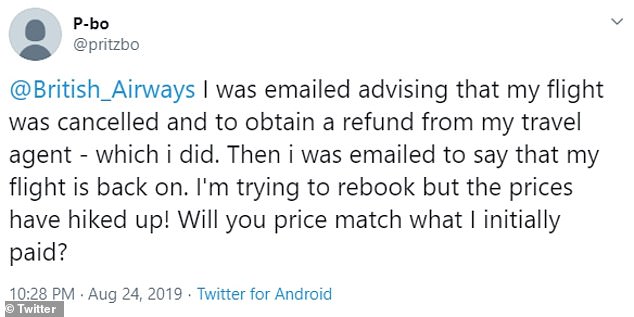 He said anyone who went on to spend money on alternative arrangements should contact British Airways ‘and we will deal with each case on an individual basis’.

The spokesman clarified that some flights on non-strike days will be affected, but that the bulk of those cancelled are on the three strike days.

Dozens of passengers have taken to social media to complain about the error, which has left many confused about which flight they should now take.

Writing on Twitter, Mark Holgate said: ‘To be honest, I’m a bit confused. I did rebook last night onto a less convenient flight the next evening.

‘And then I got an email from BA a few hours ago saying my original flight was no longer cancelled.’

While Gareth Faull said: ‘Get an email this morning saying to rebook my cancelled BA flight on Sept 11. Understandable given the pilot strike.

‘I simply rebook a later date on BA app and change hotel/train/rental car. All great! Then get an email to say the flight isn’t cancelled. WTF?! @British_Airways.’

Swathes of passengers on flights which will be grounded tried in vain to contact the airline to make alternative arrangements on Saturday.

One told said his 10-year wedding anniversary ‘trip of a lifetime’ was in doubt after more than 100 calls to BA to get a refund went unanswered.

The airline’s customer service lines were jammed on Saturday morning after passengers booked on flights received emails overnight warning ‘a large number of delays and cancellations’ were likely during the action.

The British Airline Pilots Association (Balpa) announced the strikes on Friday night after 93% of its members rejected an 11.5% pay rise across three years.

Scott Kishere, a filmmaker and police community officer, said: ‘My wife and I have been told that our flight to Toronto has been cancelled.

‘This was a full package we booked through BA for our 10-year wedding anniversary. I have made over 100 attempts to contact them for a refund and they’re not answering.

‘Until we get a refund we do not have the money to rebook our trip of a lifetime.

‘With the days counting down it now looks unlikely we will be able to celebrate our 10-year anniversary as expected.’ 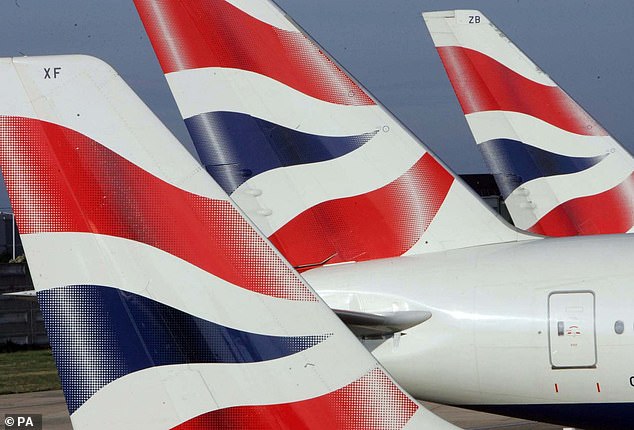 Dozens of passengers have taken to social media to complain about the error, which has left many confused about which flight they should now take (above and below) 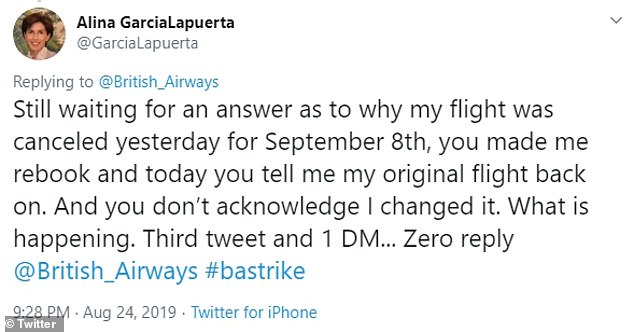 Mr Kishere, from Dorset, is one of hundreds of passengers who have tried desperately to contact BA on social media and its phone lines.

He said he also plans to travel to Chicago, for the city’s marathon, with his partner one week after the final day of strikes, but fears that could also be impacted.

‘We have worked so hard for these trips and BA do not have the decency or customer care to support us.

‘For them this has been on the cards for a long time and I cannot believe they didn’t have a contingency in place.’

Others have also tweeted at BA telling them their wedding plans have been threatened by the action.

Criticism has been levelled at both the airline itself and the pilots who voted for strike action following a long-running dispute.

Chris Deverell, 36, from Bedford, said his ‘trip of a lifetime’ to watch the Rugby World Cup in Japan with his father was in jeopardy.

‘At the moment I have not heard anything from BA as to whether it’s going to be cancelled or not,’ said Mr Deverell, whose trip has been roughly four years in the making.

‘They have just basically been saying ‘keep checking the website’ and they will email and let us know if it’s going to be cancelled.’ 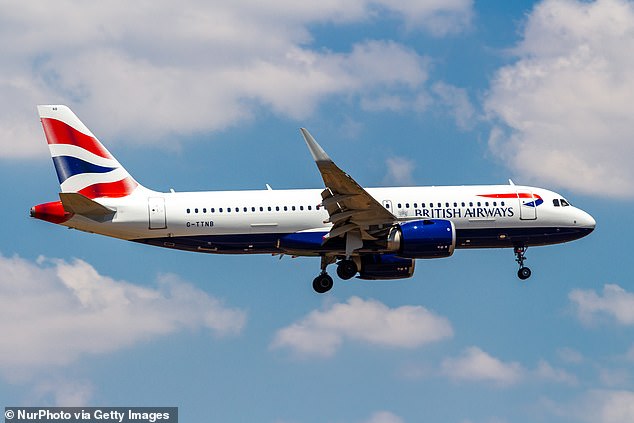 Criticism has been levelled at both the airline itself and the pilots who voted for strike action following a long-running dispute (pictured, a British Airways plane)

Others have also tweeted at BA telling them their wedding plans have been threatened by the action (above and below, angry passengers on Twitter) 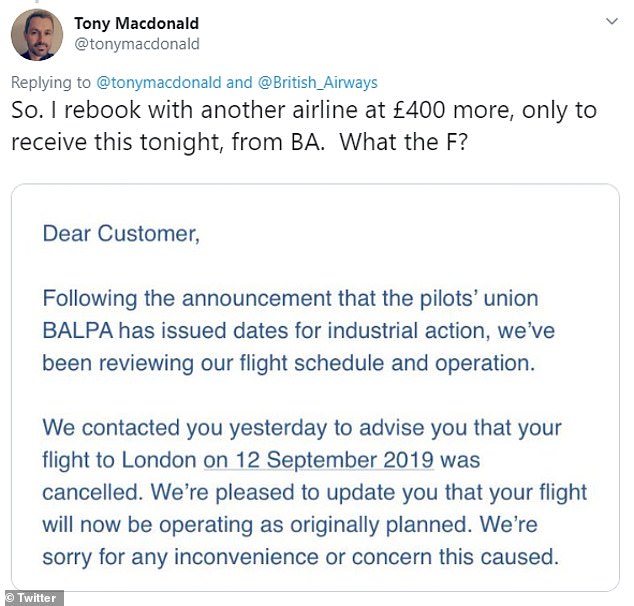 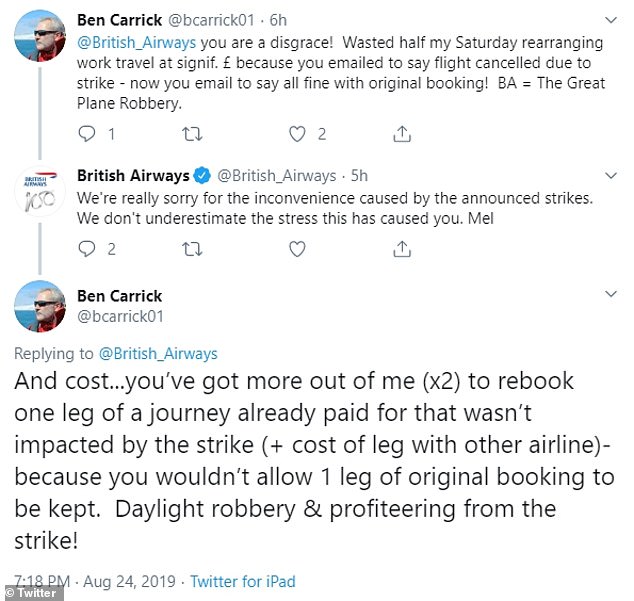 He said they have been able to use airmiles to book an alternative flight three days after their planned outbound flight, which was on September 27, but said the threat to the trip was ‘totally gutting, I’m furious’.

‘I’m not going to be able to repeat that experience again,’ he said, adding arrangements when he arrived in Japan have also been impacted.

‘It’s not like a holiday I can do next year, there’s never going to be another Rugby World Cup in Japan in my lifetime.

‘The pilots should not be asking for anything more than anybody else.’

BA has said its proposed pay deal has been accepted by members of the Unite and GMB unions, which represent engineers, cabin crew and ground staff.

Balpa said more strike dates could yet be announced, adding they are ‘a last resort and with enormous frustration at the way the business is now being run’.

Peter Dempsey, 41, said his family could be forced to pay hundreds of pounds for alternative flights to return from a family wedding in Seville, southern Spain.

‘It’s the return that has completely screwed us up as we are flying back with our in-laws and we cannot move the dates,’ said Mr Dempsey, who flies out on September 5 for his wife’s cousin’s wedding.

‘We have no option but to completely cancel both legs and rebook or they won’t give a refund.’

‘It’s not a massive amount but not everyone has that kind of money. God knows what it is costing others who have flights to America.’

Mr Dempsey described the service since the announcement as ‘shocking’, adding BA ‘clearly don’t have enough people to handle such a crisis’.

The airline said it will offer refunds and rebookings, adding: ‘We will do everything we can to get as many people away on their journeys as possible.’