Politicians and passengers have accused British Airways of bailing out of the UK ahead of Brexit after it was claimed the carrier could relocate to Madrid.

The firm is seeking help from the Spanish government to ensure its planes can keep flying across the EU in the event of a no-deal exit.

Labour deputy leader Tom Watson said today that BA should be renamed ‘Spanish Airways’ if they have to move senior staff from the UK to Spain in 2019 while his colleague Mary Creagh tweeted: ‘British Airways, the UK’s national flag carrier bails out of Brexit Britain’.

Brussels has already warned airlines including BA, Ryanair and easyJet they may have to relocate to the continent or sell UK-based shares to European citizens to remain part of the European Open Skies deal.

But IAG, which is run by Willie Walsh, has denied it would move its headquarters from London to Madrid to satisfy the EU.

Labour’s deputy leader Tom Watson suggested that BA should be renamed Spanish Airways if they moved to Madrid, a claim which IAG has denied

Experts and rivals including Ryanair’s Michael O’Leary have said the Anglo-Spanish airline group could fail ownership rules demanding that 50 per cent of its shares must be held inside the EU and be forced to break itself up.

This is because British Airways shareholders took 55 per cent of the business in 2011 as part of the £5billion merger with Iberia and they will be classed as non-EU shareholders when the UK cuts ties with Brussels in March next year.

Qatar Airways is also believed to own a fifth of the business and a US investment firm another ten per cent.

What could happen to London-based BA if there is a no-deal Brexit?

Experts have warned millions of air passengers could be grounded in the event of a no deal Brexit.

If British Airways’ parent company IAG doesn’t retain its EU status it could be catastrophic, experts have

The International Air Transport Association (IATA) said possible ramifications for these airlines could include:

The IATA said last month that planning for a no-deal Brexit needed to move much faster to ensure planes can keep flying and safety and regulatory frameworks keep functioning whatever the new relationship between the pair after March 29.

He warned: ‘On April 1 it will be us, the airlines, who have to manage millions of passengers potentially grounded in airports unable to take a flight … It will be a nightmare in European airports and UK airports’.

Michael O’Leary of Ryanair, said last year: ‘They’re hoping that it’ll go away. They’ll have to front up to how catastrophic it is at some point though. They don’t know themselves [how to solve it]. But their shareholders will have to sell, and the group has to get broken up’.

If IAG loses its EU airline status it would also be denied access to the lucrative routes that cross Europe, such as between France and Germany or Spain and Italy.

While BA does not fly these routes other airlines owned by its parent company including Iberia, Aer Lingus and budget airlines Vueling and Level, would lose a fortune if they are shut out.

It would also be bad news for consumers because it could reduce competition, increase prices or lead to routes being axed completely.

Letters published in El Pais suggest IAG is now seriously planning for a no deal scenario and have asked the Spanish government for their support to avoid this nightmare scenario.

One letter from October 1, sent to IAG’s president Antonio Vázquez, confirms contact with the European Commission to ‘address the incidence of Brexit in the ownership and control of the IAG group airlines located in Spain’.

Theresa May’s Brexit deal is on a knife-edge and planes could be briefly grounded and free access to the EU market stopped or curbed if there is no deal, experts have said.

And last month Transport Secretary, Chris Grayling said the EU had not yet agreed a ‘bare-bones’ aviation deal to keep planes flying after March 29 next year.

The worst case scenario if a deal is not reached would see many UK registered planes grounded on the day after Brexit.

But leading Brexiteer Jacob Rees-Mogg has dismissed claims that planes would be grounded post Brexit.

He told LBC today: ‘Everyone has said, from the President of the European Council downwards, that flights will continue after March 29. I don’t see why we should disbelieve them. 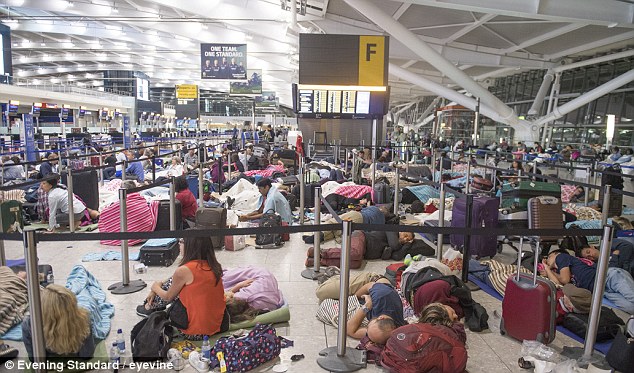 The UK Government would need to negotiate access to the European Common Aviation Area or try for a new deal completely because there are no World Trade Organisation rules to fall back on.

Some have claimed this could take up to five weeks if no framework is in place.

It is the UK’s flag carrier, and was once known as ‘the world’s favourite airline’.

British shareholders took 55 per cent of the business and the firm based its operational headquarters in London, although the parent company is officially registered in Madrid.

With its roots in the pioneers of commercial flight soon after the First World War, British Airways came from a merger of British European Airways and BOAC in 1974.

IAG is also the parent company of Aer Lingus, Iberia and Vueling.

In 2017, IAG launched LEVEL a new low cost longhaul airline brand that flies from Barcelona to four transatlantic destinations and will start flights from Paris in July 2018.

The most likely consequence is that the EU would treat British airlines the same as American rivals by allowing them to fly to the EU but stopping them flying within the bloc.

This would mean intra-Europe routes dominated by airlines such as easyJet, Ryanair and Norwegian, could be stopped or reduced for UK airlines.

This would mean that some routes could disappear or be taken over by more expensive European airlines.

Experts believe that IAG may have to take evasive action including buying out British shareholders or convince the EU to relax its strict ownership laws.

The International Air Transport Association, which represents some 290 of the world’s airlines, said last month that a no-deal would be a disaster for UK airlines.

They say ‘thousands, millions of passengers’ would be stuck because of grounded flights in the worst case scenario.

BA’s boss Willie Walsh has insisted it is ‘nonsense’ to suggest a no-deal Brexit would stop BA flights.

But last month the EU’s top transport official said she ‘will not bend the rules’ to help IAG if the UK crashes out without a deal.

Violeta Bulc, EU transport commissioner, told the Financial Times: ‘If there is no deal [between the EU and UK], I don’t need to point out which side the EU will be on’, adding: ‘It’s Spain that we will have in mind’.

IAG said it is ‘confident that we will comply with the EU and the UK ownership and control rules post-Brexit’.

A spokesman added: ‘We remain confident that a comprehensive air transport agreement between the EU and the UK will be reached. It’s in the UK and EU’s interests to have a fully liberalised aviation agreement.

‘Aviation liberalisation has been a great success story across Europe benefitting one billion customers each year and creating a huge number of jobs across the continent. Even if there is no Brexit deal, both the EU and UK have said they will put an agreement in place that allows flights to continue’.

But industry experts have said that a no deal could require them to break up the company into two businesses: BA for Britain and the rest of its airlines in a European company.

Easyjet is believed to be setting up a new Austrian headquarters and registering 100 plaes there while founder Stelios Haji-Ioannou – who has dual UK and Cypriot nationality – can class his share EU-owned.

Ryanair’s headquarters is in in Ireland but has a large number of UK shareholders but should pass the EU’s ownership test. 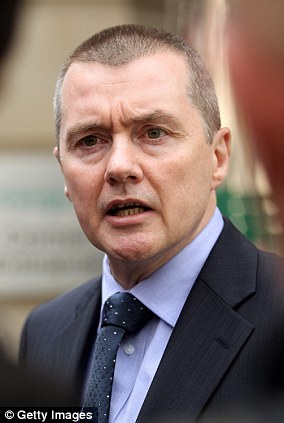 Willie Walsh earned the nickname ‘slasher’ and moved to BA after turning around Aer Lingus, the airline he started with as a pilot

Unlike most FTSE 100 bosses, Walsh is no slick management trainee.

The second child of a Dublin glazier, he started as a pilot at Aer Lingus, becoming a 737 captain where he forged a reputation as a formidable negotiator for the pilots’ union. Airline management swiftly realised this bug-eyed street fighter might be rather more useful to have on their side of the table.

After holding various management positions, by the time he became a chief executive the airline industry was teetering on the brink of collapse following the 9/11 attacks, with Aer Lingus staring at oblivion.

Walsh cut costs by 30 per cent, laying off more than 2,000 people and raising £350,000 by selling the Dublin headquarters’ art collection. Ireland’s press dubbed him ‘Slasher’ Walsh but by 2004 the airline was in profit.

Turning a state-owned anachronism like Aer Lingus into a privatised money-maker made him the perfect choice for British Airways.

Despite being privatised 20 years previously, BA was out of step with hungrier, leaner rivals. Long-haul cabin crew, for example, were earning double the wages at Virgin Atlantic.

Walsh set about reducing the cost base, giving managers the chop and axing cosy travel perks for staff.

He insists he’s not motivated by power or money but earned £6.4million in 2015.

He famously eschews executive perks such as a chauffeur or even a secretary, preferring to handle calls himself.

He last took a proper holiday in 2005, and describes the idea of a fortnight off work as ‘torture’.

Walsh recently said he intended to carry on a ‘few more years’ before heading off to spend more time with wife Caragh, who he met at Aer Lingus and with whom he has a 21-year-old daughter, at home in Hampshire.