British Airways could resume flights at 50 per cent capacity as early as this summer, but bosses have today warned it could take up to three years for passenger numbers to recover to pre-pandemic levels.

The airline, which grounded all flights from Gatwick in March after the outbreak of coronavirus, could make a ‘meaningful return’ in July, according to bosses of its parent company.

But they also warned that Covid-19 was having a ‘devastating impact’ on the global airline and travel sectors.

As a result, they predict passenger demand will not recover to pre-crisis levels until 2023.

The warning comes just a week after IAG bosses revealed up to the jobs of up to 45,000 BA staff were at risk of redundancy.

Willie Walsh, chief executive of International Airlines Group (IAG), the parent company of BA and Aer Lingus, said: ‘We are planning for a meaningful return to service in July 2020 at the earliest, depending on the easing of lockdowns and travel restrictions around the world.

British Airways could resume flights at 50 per cent capacity as early as this summer, but bosses have today warned it could take up to three years for passenger numbers to recover to pre-pandemic levels

‘We will adapt our operating procedures to ensure our customers and our people are properly protected in this new environment.

‘However, we do not expect passenger demand to recover to the level of 2019 before 2023 at the earliest.

‘This means group-wide restructuring is essential in order to get through the crisis and preserve an adequate level of liquidity.

He added: ‘We intend to come out of the crisis as a stronger group.’

Last week, bosses at IAG said it was formally notifying trade unions about a proposed restructuring and redundancy programme.

Thousands of British Airways workers look set to lose their jobs as its owners IAG announced redundancies on Tuesday afternoon.

Airline companies have been struggling to run as the coronavirus lockdown grounds planes around the world. BA had already started struggling after it furloughed more than half of its 45,000 workers.

In a statement, IAG said: ‘In light of the impact of Covid-19 on current operations and the expectation that the recovery of passenger demand to 2019 levels will take several years, British Airways is formally notifying its trade unions about a proposed restructuring and redundancy programme.

IAG chiefs say that due to the coronavirus and subsequent travel restrictions, passenger capacity fell 94 per cent from late March, with most aircraft grounded, or operating a reduced service for repatriation and cargo-only flights.

Bosses of the Anglo-Spanish multinational insisted, when going into the crisis, the firm has a strong balance sheet with £8.7 billion.

IAG has dipped into the Bank of England’s loan scheme for British Airways for £300 million, although this has not stopped the firm announcing plans for 12,000 redundancies.

The firm added it is planning a ‘meaningful return’ to service in July with capacity of 50% in 2020, although the company added: ‘These plans are highly uncertain and subject to the easing of lockdowns and travel restrictions’.

However, passenger demand will not recover to pre-crisis levels until 2023, it predicted, leading to 68 planes due for delivery now likely to be deferred.

There was a one-off charge in the quarter of 1.3 billion euros (£1.1 billion) to untangle complicated hedges on fuel and currency exchange costs.

Willie Walsh, IAG chief executive, said: ‘The operating result up to the end of February was in line with a year ago. However, March’s performance was severely affected by government travel restrictions due to the rapid spread of Covid-19 which significantly impacted demand.’ 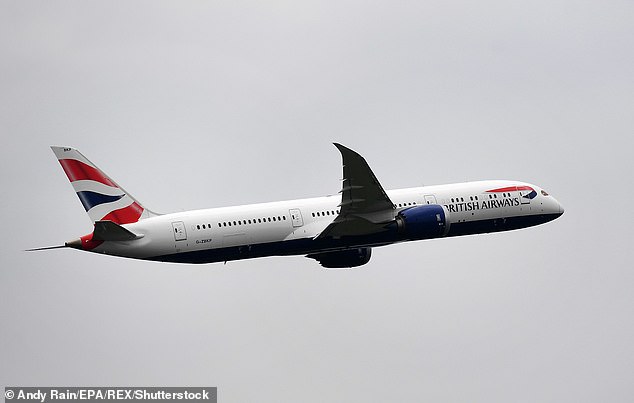 The airline, which grounded all flights from Gatwick in March after the outbreak of coronavirus, could make a ‘meaningful return’ in July, according to bosses of its parent company

Mr Walsh gave his backing for temperature screening of passengers at airports, after Heathrow announced on Wednesday that it will trial the measure.

He said: ‘We believe that temperature checks on departure and on arrival, that’s an appropriate measure and we do support it.

‘We also support the mandatory use of face coverings, and that I expect to be required on a European-wide basis.’

He confirmed his delayed retirement will now take place on September 24, with Iberia boss Luis Gallego taking over then.

The news comes just weeks after British Airways said it was set to make up to 12,000 workers redundant.

The airline, which employs 42,000 people, has suffered from the global collapse in passenger numbers caused by the coronavirus pandemic.

IAG said BA will consult on a ‘restructuring and redundancy programme’ as it is expected to take ‘several years’ until demand for air travel returns to 2019 levels.

It added at the time: ‘The proposals remain subject to consultation but it is likely that they will affect most of British Airways’ employees and may result in the redundancy of up to 12,000 of them.’

Sir Richard Branson has warned that Virgin Atlantic will collapse unless it receives Government support, with more than 3,000 jobs set to go.