British Airways has unveiled its brand new ‘Club Suite’ – the most radical overhaul of its business class cabin in 20 years.

It will arrive first on the carrier’s new Airbus A350s, which will begin flying services from July.

The new suites will offer direct aisle access to every passenger, a door for greater privacy – a first for BA – a ‘luxurious’ lie-flat seat and an 18.5-inch TV screen.

British Airways has unveiled its new business class seat, the Club Suite, which it is set to roll out on A350 services 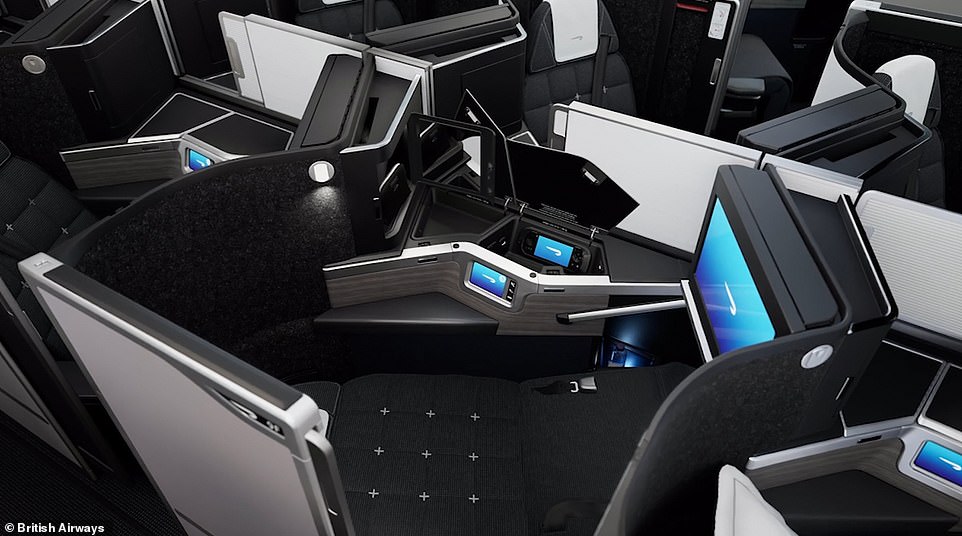 Each suite in the new business class cabin will feature an in-flight entertainment screen that is 18.5 inches wide 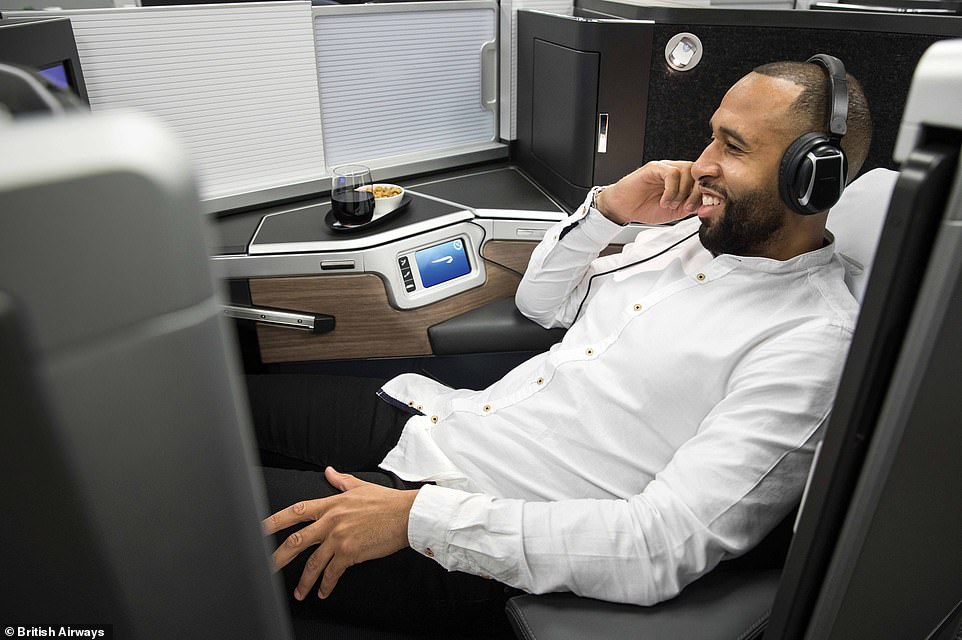 The club suites will be arranged in a 1-2-1 configuration and will boast 40 per cent more storage, including a vanity unit and a mirror.

The seat itself is 79 inches long (6ft 6in) when in the bed position, seven inches longer than the current offering.

Club World passengers in the suites will also benefit from on board WiFi, high-definition gate-to-gate entertainment and PC/USB power. 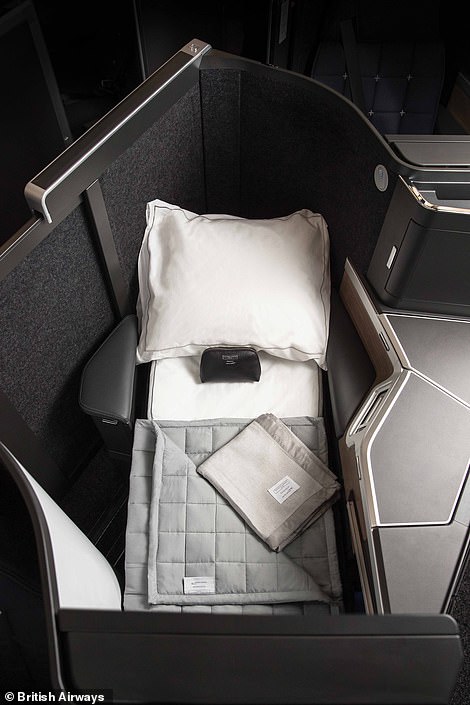 The airline, which is marking its centenary this year, will roll out the new suites in a carefully managed programme designed to minimise disruption to customers.

During phase one, A350 aircraft will fly short-haul services between London and Madrid to allow the airline’s teams to perfect their customer service delivery and familiarise cabin crew with the aircraft layout.

In phase two, from October 1, the aircraft will begin long-haul flying. During this period another three A350 aircraft will join the British Airways fleet and two Boeing 777 aircraft will also be retrofitted with the new cabin.

At the start of 2020 phase three will begin which will see British Airways rolling out its club suite on further long-haul aircraft across the network.

Alex Cruz, British Airways’ chairman and CEO, said: ‘The arrival of our first A350 featuring our new Club Suite is one of the most exciting developments in our £6.5 billion investment programme.

‘Each new suite has direct aisle access and comes with a personal door – design features which were incorporated as a direct result of the feedback we’ve had from our customers.

‘We’ve worked hard to ensure every aspect of the Club World experience from the lounges we’ve refreshed, to the new gourmet menus from Do&Co on flights from Heathrow, and the luxurious bedding we’ve introduced from The White Company, exudes the very British style and quality customers expect from us.

‘At British Airways we have one of Europe’s largest long-haul fleets and most far-reaching global networks, so it will take some time to make the cabin available to everybody.

‘We hope that as more customers have the chance to experience it, they’ll enjoy travelling in it as much as we’ve enjoyed designing it.’ 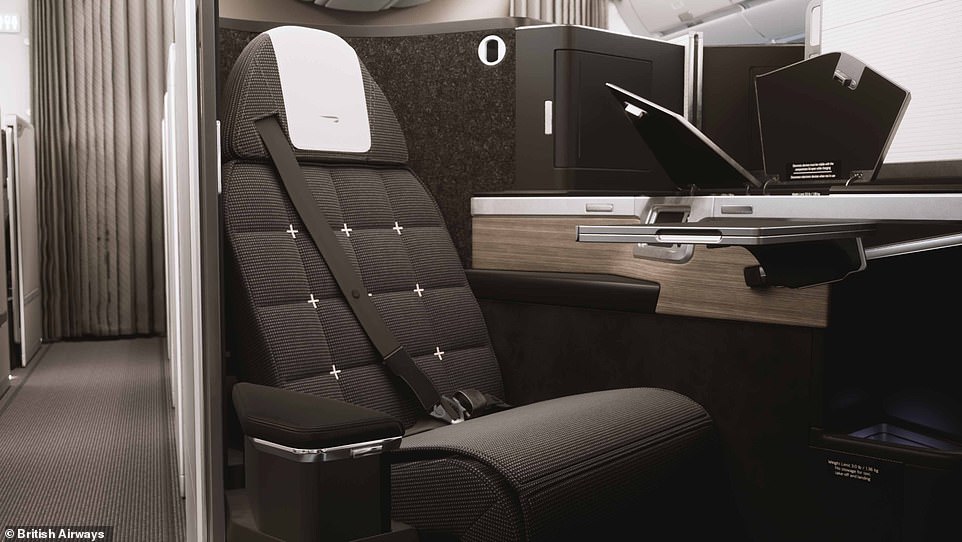 Alex Cruz, British Airways’ chairman and CEO, said: ‘The arrival of our first A350 featuring our new Club Suite is one of the most exciting developments in our £6.5 billion investment programme’ 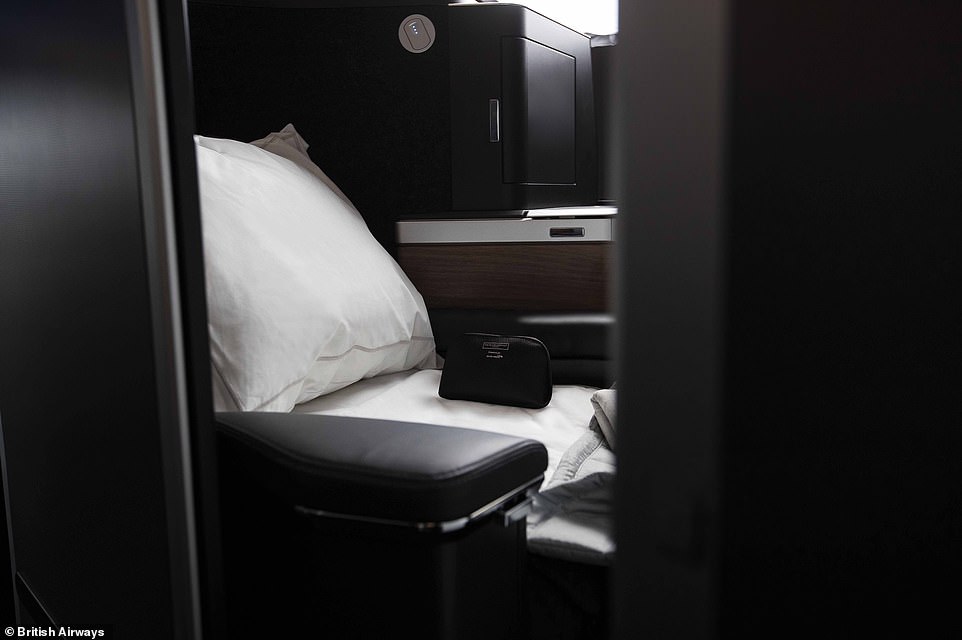 During phase one of the roll-out of the new suites, A350 aircraft will fly between London and Madrid to allow the airline’s teams to perfect their customer service delivery 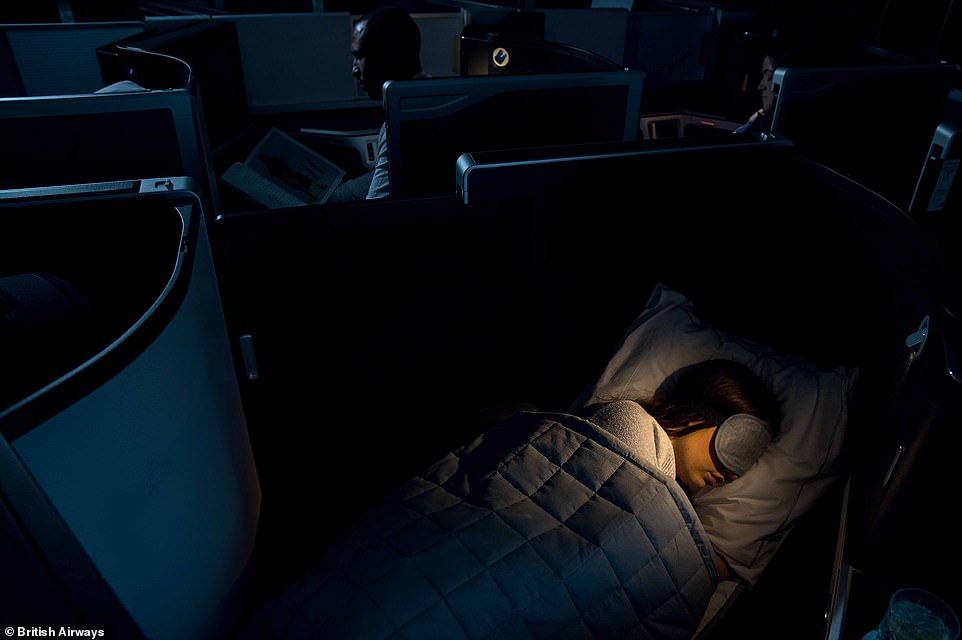 In phase two, from October 1, the aircraft will begin long-haul flying. During this phase, two Boeing 777s will be retro-fitted to include the new cabin 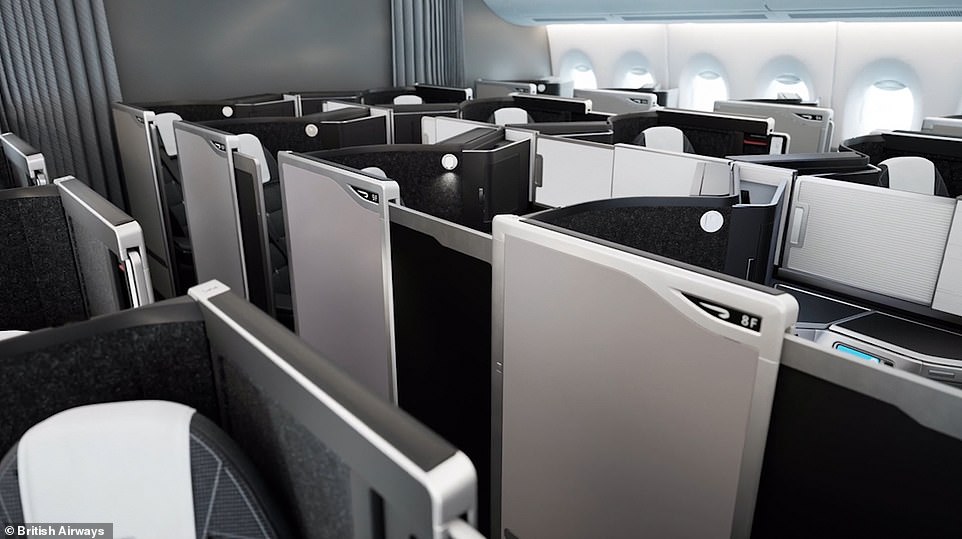 As well as a new 56-seat Club World cabin, the three-cabin A350 will feature the latest World Traveller Plus cabin (56 seats) with new furnishings including a plush new pillow and warm quilt, new amenity kits, an enhanced service and an improved dining experience.

British Airways says the A350 aircraft itself will promote a feeling of well-being, space and calm due to its reduced noise levels, high ceilings and ambient lighting, which is intended to compliment the time of day and outside light. 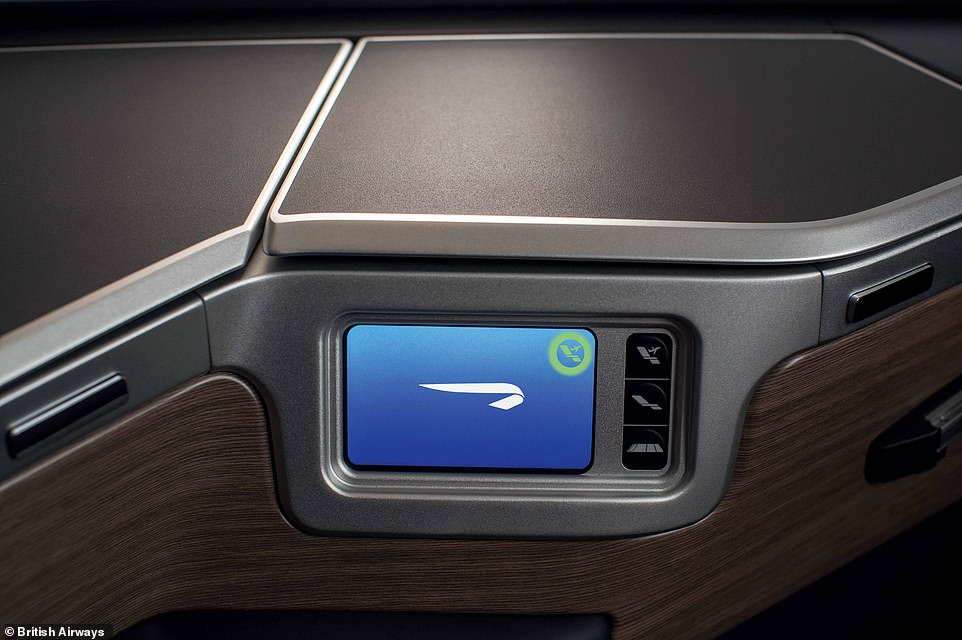 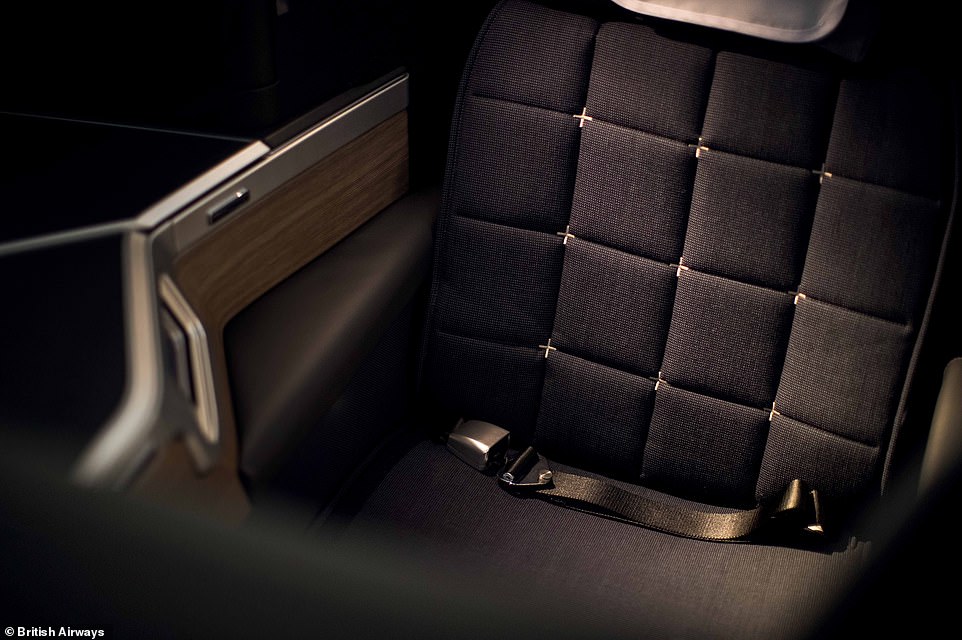 Rob Burgess, editor of www.headforpoints.com, said he is impressed with the new suites 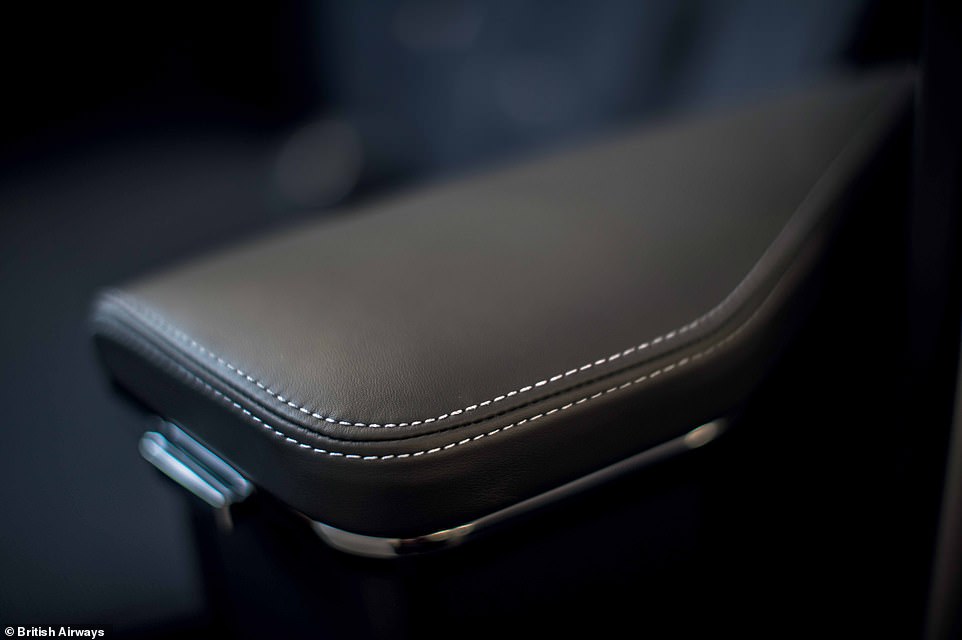 The comfortable arm rests on the seats. Club World passengers in the suites will benefit from on board WiFi, high definition gate-to-gate programming and PC/USB power 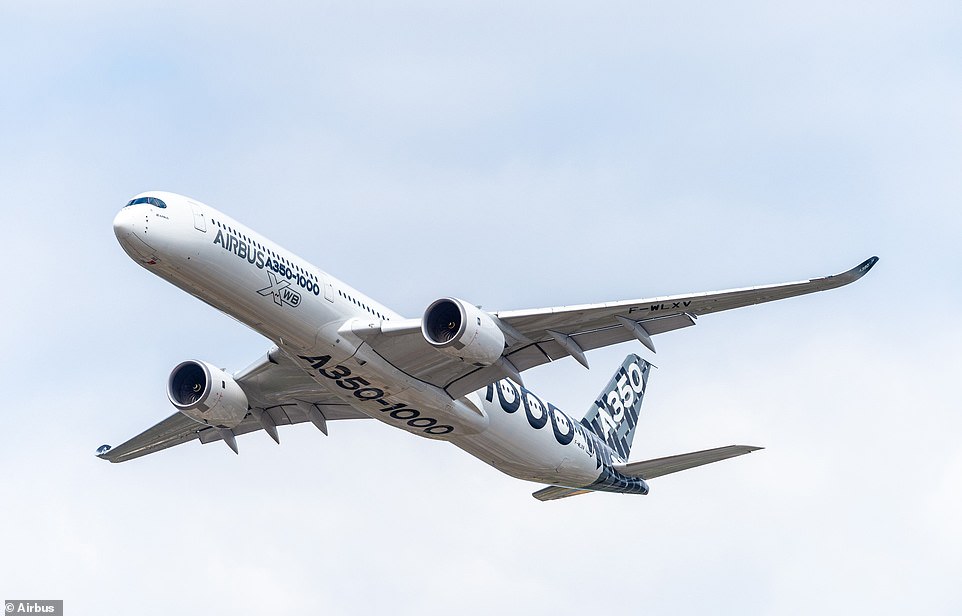 The Airbus A350, pictured, has 25 per cent lower fuel burn, which significantly reduces CO2 emissions

It adds that customers will leave their flight feeling rested thanks to higher levels of humidity and refreshed air as the cabin pressure is equivalent to an altitude of just 6,000 feet.

There are also environmental benefits to flying on the state-of the-art A350. It has 25 per cent lower fuel burn, which significantly reduces CO2 emissions.

New routes being launched this year with BA include Osaka, Pittsburgh and Charleston. 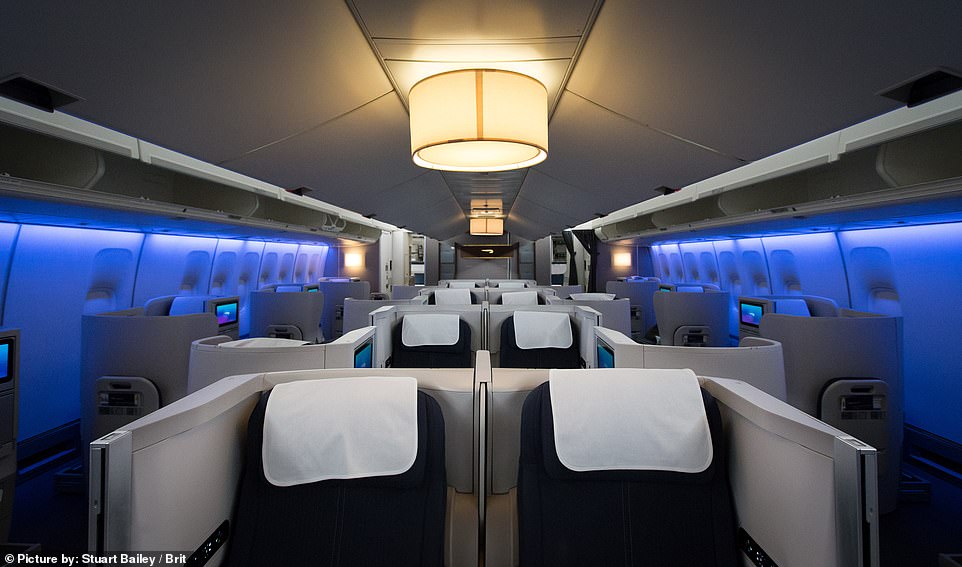 There is a marked difference between the new club suites and the current business class cabin, pictured, on British Airways long-haul aircraft 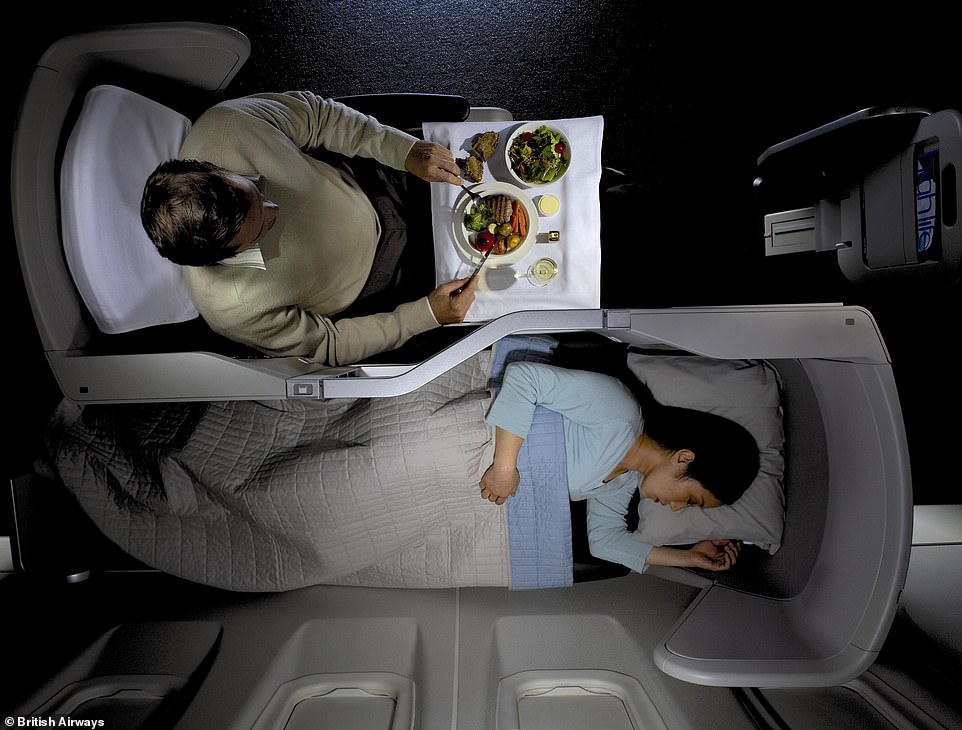 In BA’s current business class cabin, the seats are configured in a zig-zag pattern rather than a 1-2-1 configuration

Rob Burgess, editor of the www.headforpoints.com frequent flyer website, is impressed with the new suites.

He said: ‘As a regular critic of BA’s current Club World seat, I am genuinely surprised and impressed by what BA has launched.

‘I thought they might settle for “good enough” but introducing a business class suite with closing doors is more than most expected. Only Qatar Airways has anything similar.

‘Virtually all of the problems with the old seat have gone. The seat is longer, it finally has a decent amount of personal storage space, everyone gets to face forwards and the IFE (in-flight entertainment) screen is a good size.

‘A lot of thought seems to have gone into the little details which make all difference on a long flight.’

BA’s Club Suite is going head to head with Virgin Atlantic’s new A350 business class suite, which is being unveiled shortly.