British and Canadian MPs today demanded Mark Zuckerberg give evidence to a joint ‘grand committee’ about data breaches and Kremlin propaganda on Facebook.

Damian Collins, chairman of the Commons Digital, Culture, Media and Sport (DCMS) Committee and his Canadian counterpart Bob Zimmer sent a joint letter to the Facebook boss renewing demands for a hearing.

Mr Zuckerberg has given evidence to the US Congress and the European Parliament but declined invites from other country’s politicians. 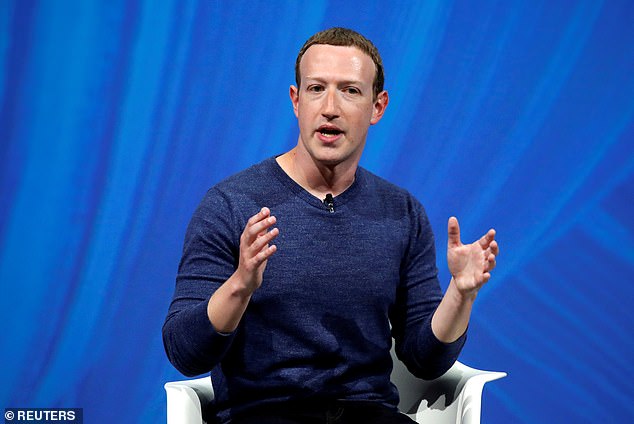 Mr Collins told Sky News today he would demand to know the ‘true scale’ of the data breaches at Facebook and who knew.

He said: ‘We need to know what went wrong and was it decisions of the directors of the company, including himself, that made the data vulnerable.’

The letter to Mr Zuckerberg announces the creation of an ‘international grand committee’ on ‘disinformation and fake news’ to be held at the end of November.

Parliamentarians from other countries have been invited to attend in what the DCMS is calling an ‘unprecedented’ joint hearing and Mr Zuckerberg has been given until Wednesday November 7 to respond.

‘Over the past year, our committees have both sought evidence from a Facebook executive with sufficient authority to give an accurate account of recent failures of process, including the recent Cambridge Analytica scandal and subsequent data breaches. 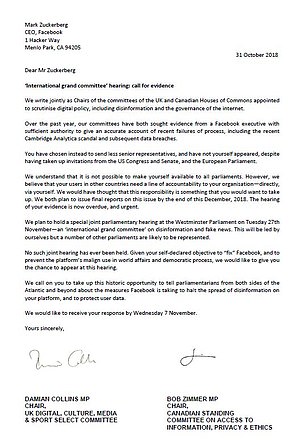 Damian Collins, chairman of the DCMS Committee and his Canadian counterpart Bob Zimmer sent a joint letter (pictured) to the Facebook boss renewing demands for a hearing

‘You have chosen instead to send less senior representatives, and have not yourself appeared, despite having taken up invitations from the US Congress and Senate, and the European Parliament,’ they said in the letter.

Mr Zuckerberg has been resisting demands from British politicians to give evidence since March.

It is the third time Mr Collins has called on Mr Zuckerberg to give evidence before the DCMS committee’s inquiry into disinformation and ‘fake news’.

Facebook has grappled with a string of scandals in recent years as evidence has emerged of political actors using the network to influence voters around the world.

The social media giant was fined £500,000 by the Information Commissioner’s Office in July, the maximum fine possible, for failing to protect millions of users’ personal information which ended up in the hands of controversial election consultants Cambridge Analytica.

A week later the Electoral Commission fined Brexit campaign groups Vote Leave and BeLeave, and referred them to the police for breaches in campaign spending centred around political advertising on Facebook.

This year, the company also released details of ‘inauthentic co-ordinated activity’ on the platform originating from Russia and Iran which targeted British and American politics.

Mr Zuckerberg has repeatedly pledged to ‘fix Facebook’ in public announcements since criticism of political operations on the network began in 2016.

‘We call on you to take up this historic opportunity to tell parliamentarians from both sides of the Atlantic and beyond about the measures Facebook is taking to halt the spread of disinformation on your platform, and to protect user data,’ added Mr Collins and Mr Zimmer.