British backpacker, 23, claims she was raped in hostel during farm work

A British backpacker claims she was raped in her crammed converted shipping container lodging while working on a zucchini farm.

Helen Kingwell, 23, was finishing her three months of regional work in Bundaberg, Queensland, earlier this year to earn her second year Australian visa.

The tourist from Bath struck up a relationship with a fellow English backpacker, but ended it when she discovered he had a girlfriend.

Ms Kingwell claims he sexually assaulted her after she fell asleep in his bed weeks later and then raped her while she was unconscious the next night.

Helen Kingwell, 23, claims she was raped in her crammed converted shipping container lodging while working on a zucchini farm

She claims the poor conditions at the hostel, where she shared a tiny room with three men, contributed to the rape.

When she told the hostel manager, the tearful young woman claims she was told her story was ‘bad for business’ and she should leave.

Ms Kingwell reported the alleged rape to police on September 24 after completing her farm work and moving onto Sydney, but was this week told there was not enough evidence to even interview the alleged rapist.

The young woman said she was speaking out to encourage other women who’ve been raped to come forward instead of keeping it to themselves.

‘Parents are worried about their children coming to Australia and a big scary man jumping out of a bush, but most rapists are people you know and trust,’ she said.

‘I hope by sharing my story it will warn other women about some of the dangers that can occur while doing farm work, you hear the horror stories and never think you would end up in a bad situation in the middle of nowhere with no money.

‘I hope to encourage other people to come forward with sexual assault to break the silence, even if the law won’t help you fight, fight for yourself.’

After travelling around Australia from December 2018, Ms Kingwell arrived at the hostel near Bundaberg on June 3.

There along with 70 to 100 other backpackers, three-quarters of whom were Asian tourists, she picked zucchinis for $2.80 a bucket at a nearby farm. 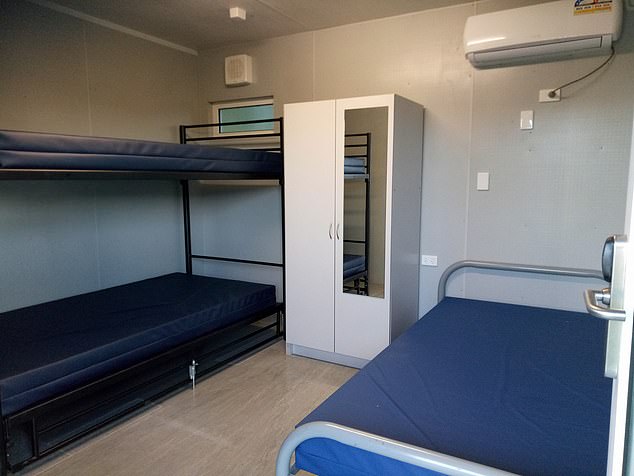 Workers lived in converted shipping containers split into three or four rooms, which with four people in bunk beds, plus a bathroom (a sample room pictured, this one with only three beds) 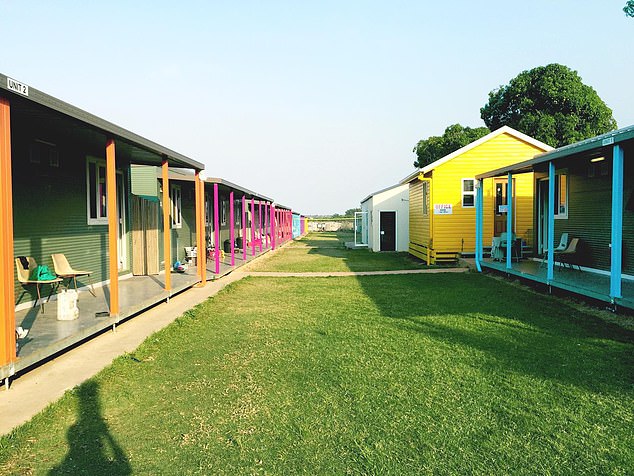 There along with 70 to 100 other backpackers, three-quarters of whom were Asian tourists, she picked zucchinis $2.80 a bucket at a nearby farm

The workers lived in converted shipping containers split into three or four rooms, which with four people in bunk beds, plus a bathroom.

‘The place was a s**tshow, it was like a slave camp. I only stayed because I was broke and had nowhere else to go,’ she told Daily Mail Australia.

‘There wasn’t enough room to move around the rooms and if you were tall and sat up in the top bunk you would hit your head on the ceiling.

‘You were living on top of each other, there wasn’t enough room for all four people to stand up in the room at once.’

Ms Kingwell said the airflow was terrible and a lot of people got sick, and it was impossible to keep clean because it was so cramped.

Each backpacker paid $180 a week in rent plus $5 transport each way to the farm – which she said wasn’t mentioned until she arrived.

Soon after arriving she befriended a 28-year-old backpacker from London, which developed into an intimate relationship.

He showered her with gifts and compliments which she now believes were to ‘put her on a pedestal’ so it would be easier to groom her.

‘Every day that passed I found myself trusting him more and more, I told him my deepest secrets,’ she said.

‘He made out like everyone else in the hostel was fake and it was me and him against the world.’ 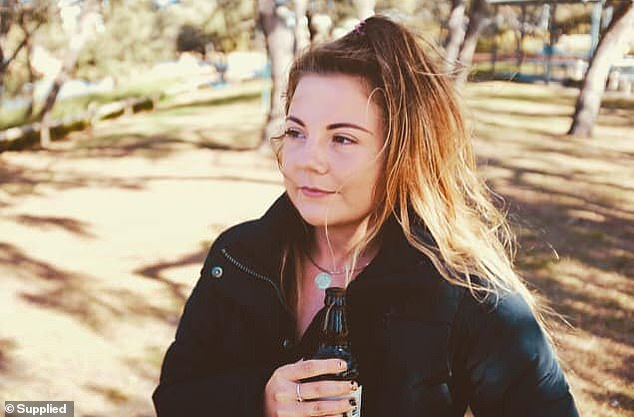 The tourist from Bath struck up a relationship with a fellow English backpacker, but ended it when she discovered he had a girlfriend. She claims he raped her weeks later

The man could speak fluent German and falsely told her the German backpackers in the hostel were saying nasty things about her.

After the first time they had sex he moved into her room and they shared her bottom bunk every night with a sheet draped around it for privacy.

After the second time they had consensual sex she found out he had a girlfriend in Melbourne and said they should just be friends.

‘I didn’t appreciate being his dirty little secret,’ she explained.

They kept sleeping in the bottom bunk but didn’t have any intimate contact for about a week and a half before she decided it was weird and moved to the top bunk.

A week later on July 11 they were watching Forest Gump in the bottom bunk and she decided to go to bed.

However, as she went to climb into her bed she claims he grabbed her around the waist and moved her back to the bottom bunk insisting they finish the film.

Ms Kingwell fell asleep and claims she awoke about 4.55am to him molesting her.

She tried to roll onto her stomach to stop him but he ‘aggressively’ rolled her towards him then pulled down her underwear, she said.

‘I was shocked, I froze. I felt so degraded, how could my friend who I trusted have done this to me?’ she said. 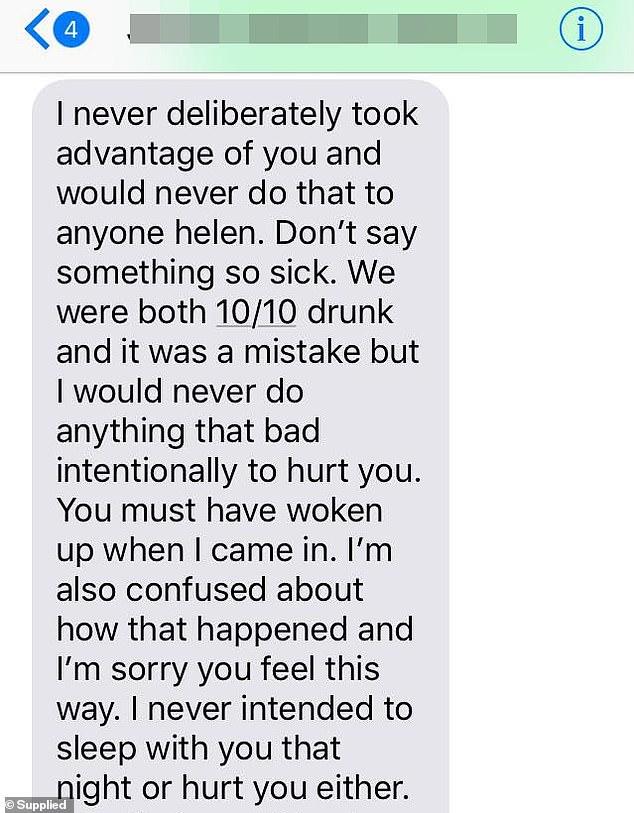 Ms Kingwell sent him a long and angry text message confronting him about both incidents days later, and recieved a series of replies starting with this

He abruptly stopped when the 5am alarm went off to wake everyone up for work at 5.30am.

‘I knew he knew he was doing something wrong because all the other times we hadn’t stopped or worried about what other people were thinking,’ she said.

‘I felt ashamed and embarrassed and left the room crying. The more I thought about it, the sicker it made me feel. I felt confused and betrayed.’

Later that day she made it clear to him that they were just friends and that shouldn’t happen ever again, to which he agreed.

What allegedly happened continued to sink in until she admitted to herself that he had sexually assaulted her and she was disgusted with him.

The next night, July 13, was her friend’s surprise 28th birthday party and she wanted to stay far away from her alleged rapist but didn’t want to ruin the night.

‘I drank myself silly to forget the pain and confusion I felt that night in his presence. I couldn’t look at him without feeling sick,’ she said.

Ms Kingwell said she was ignoring and avoiding him all night to the point where everyone noticed, so he must have known she wasn’t interested in him. 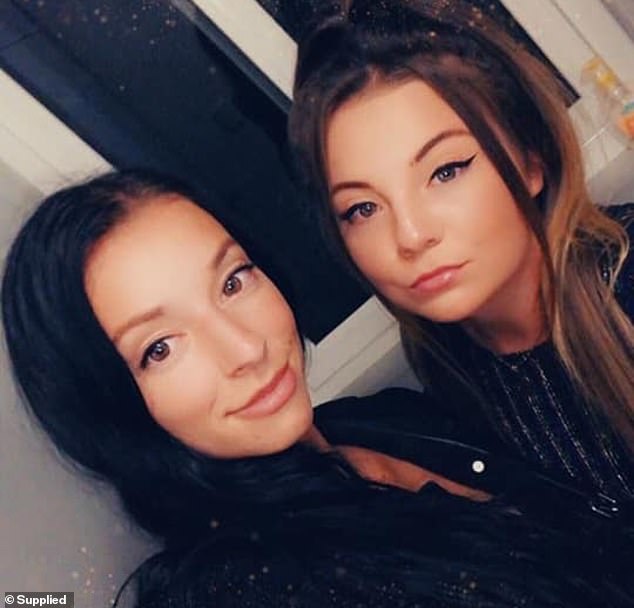 Ms Kingwell with her friend (left), who with the help of two other backpackers carried her to bed and tucked her in after she was too drunk to continue the night out 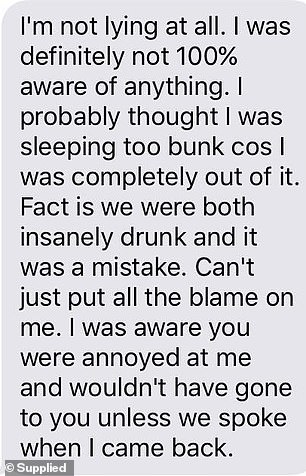 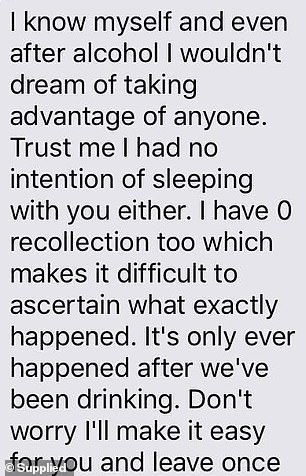 She only lasted about an hour at the bar they went to after drinking at the hostel before her friends took her home and carried her into bed, fully clothed, where she passed out about 1am.

‘I woke up [the next morning] completely naked in my bed alone, scared, and confused with someone’s semen inside me,’ she said.

‘I knew deep down it was him when I woke up because of what happened the night before, but I hoped it was someone else.’

She went back to her room crying and claims the alleged rapist immediately came up to her repeating ‘I’m sorry, I’m sorry’ as he grabbed her into a hug.

Ms Kingwell pushed him away and went to work, but was too upset to continue after a few hours.

Days later she sent him a long and angry text message confronting him about both incidents.

‘You spend money on a girl just to make her feel special just to control her and make her your possession that you can just pick up and use whenever you want even when I didn’t even know my own name or where I was,’ she wrote.

‘I was not sober enough to give you consent and you knew that because when I was more sober I didn’t even want to talk to you.’ 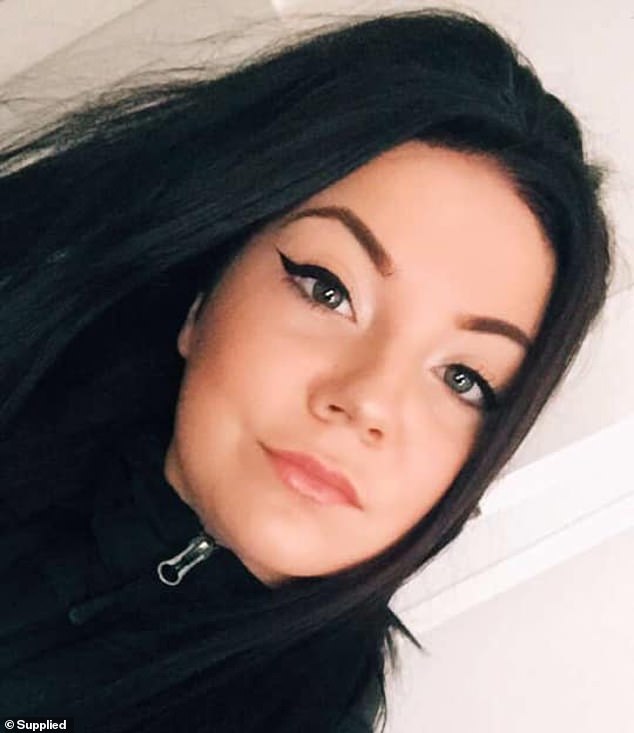 Ms Kingwell had a mental breakdown, locking herself in her room and cutting about seven inches of her hair off with nail scissors (pictured after)

He replied: ‘I never deliberately took advantage of you and would never do that to anyone, Helen. Don’t say something so sick.

In other texts he claimed she must have consented because he ‘vaguely remembered her kissing him’ and he was able to get aroused.

‘I know it looks f**king bad. I can only apologise,’  he wrote in one text.

One of her roommates made a statement to police in support of Ms Kingwell, describing what he heard in the early hours of the morning after the group returned to the hostel.

‘He got angry at me the two times we had sex because we were being loud, but the night I was raped he could hear the sound of sex and the bed banging against the wall, but not me making any noise,’ Ms Kingwell said.

The next day Ms Kingwell was making breakfast and was ‘on edge’ thinking every person who walked into the kitchen was him, until he did walk in.

‘He looked at me with the face of a guilty man, he dropped his head low and walked straight back out,’ she claimed. 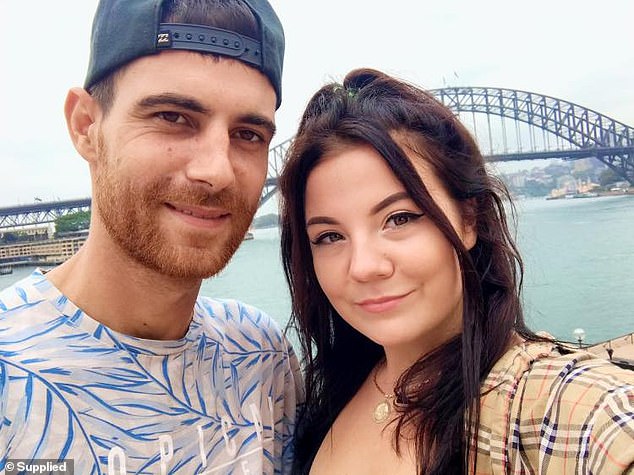 Ms Kingwell (pictured with her current boyfriend) reported the alleged rape on September 24 when she arrived in Sydney, on the advice of a sexual assault counsellor

Ms Kingwell had a mental breakdown, locking herself in her room and cutting about seven inches of her hair off.

‘I got toenail scissors and hacked off my hair because he used to say how much he liked my long hair,’ she said.

That evening she told the hostel manager what happened but claims she was told: ‘No, your story is bad for my business, I want you to leave as well.’

She was allowed to stay after she said she would go to the police, under the condition that she didn’t drink alcohol.

‘She said “you’re the one who drank too much” and that I asked for him to be in my room. She wasn’t being supportive or wanting to help me at all,’ she claimed.

The manager, who has since left the hostel, told Daily Mail Australia she encouraged her to go to the police and offered to go with her.

She said Ms Kingwell may have misunderstood her comments and that alcohol was banned at the hostel for everyone – though many guests drank anyway.

‘What people do is out of my control but when she told me what happened and cried I felt sad and very sorry for her. But still I can’t judge anyone because I don’t know what happened,’ she said. 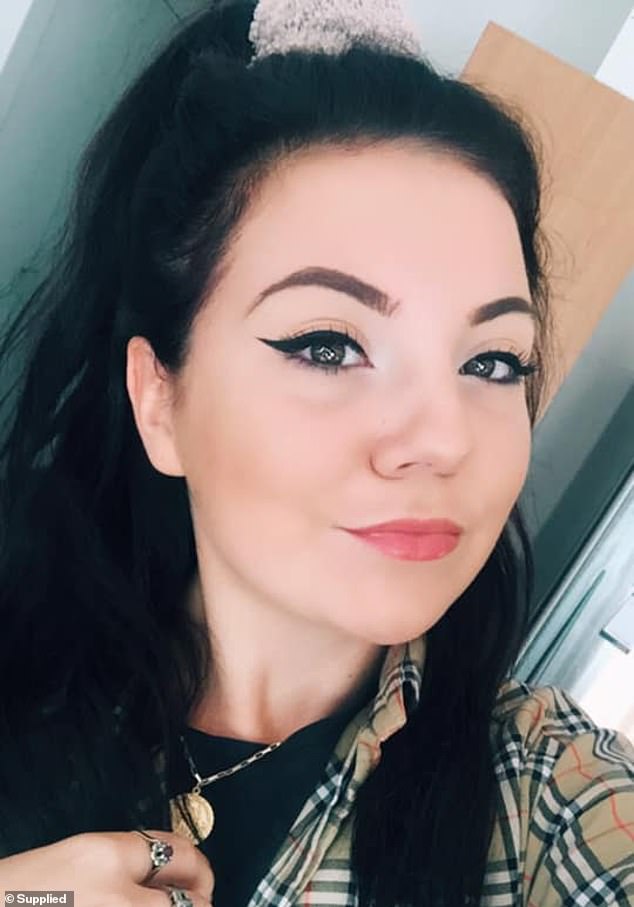 Ms Kingwell said she was too ashamed and confused to go to the police immediately but rang a sexual assault helpline.

She said she was advised to wait to report it when she got to a big city where police would be better able to handle the case.

Ms Kingwell said after she reported her alleged rape, she was told a man in a suit with a briefcase had come by to inspect the hostel and soon afterwards everyone in the shipping containers was moved to better housing.

The former manager said the landlord, who owned the shipping container accommodation, cancelled the lease and the hostel moved on October 1.