A ‘miracle’ boy who was born with just two per cent of his brain is learning how to count and surf – despite doctors’ fears he wouldn’t survive.

Noah Wall, six, appeared on Good Morning Britain on Wednesday with his parents to share his story.

Shelley and Rob Wall, from Cumbria, Britain, have taken the youngster to a brain-training centre in Australia where he has learnt how to sit up by himself, count and even surf.

The six-year-old now wants to learn how to walk and ski.

His parents were told five times to terminate the pregnancy but they were determined to see it through. 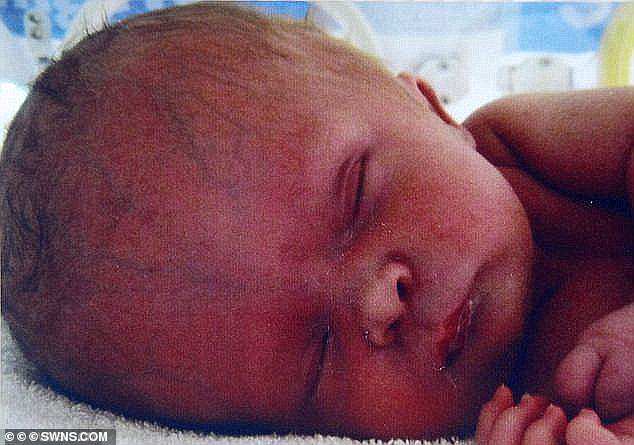 Noah’s been receiving a treatment called ‘neurophysics’, a form of brain training that utilises cognitive exercises and physiotherapy.

‘Usually they don’t do it for children. But we are incredibly lucky to have gotten an assessment,’ Mr Wall said.

‘The brain’s ability to heal and correct the body’s nervous system is amazing.’

When Noah was born many medics thought he had no brain at all, while others believed it was squashed into a small area.

However, by the age of three, brain scans revealed the British youngster had grown 80 per cent of his brain.

‘Even if his brain had been so squashed up, he’d be severely mentally disabled because of all that damage and look at him — he’s as bright as a button,’ Mr Wall said.

Mrs Wall discovered three months into her pregnancy that her unborn son had a raft of health problems.

These included spina bifida – a condition which prevents the spine from developing properly –  as well as rare chromosome abnormalities and hydrocephalus. 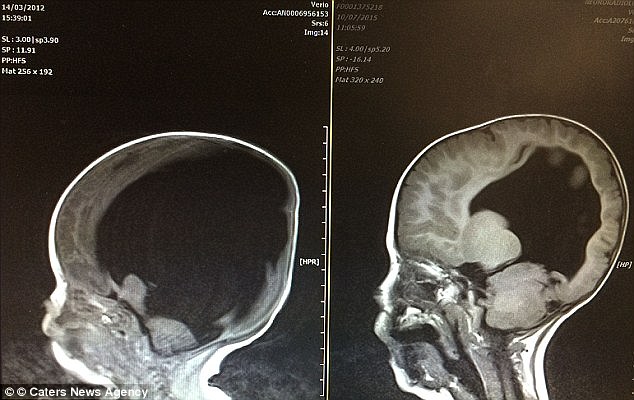 On the left is a scan of Noah’s brain when he was born, filled with fluid (in black) and with very little healthy brain tissue. On the right is his brain now, which is almost fully functioning

Mr Wall said they never considered giving up on their unborn child.

‘We were older parents, if younger people were offered that choice they may have felt pressured to go through with it, but we know our own minds and we are positive people,’ Mr Wall said.

‘We wanted to give Noah the chance of life.’

Mrs Wall described their experience with doctors, saying: ‘Before he was born they gave me the option of a termination five times.’

‘We got taken into a room and they drew a circle saying ”this brain will only be half a brain”. ‘

The couple were admitted to hospital a week before Mrs Wall’s due date because the pressure on Noah’s brain was becoming dangerous.

There were 12 doctors in the operating theatre as experts performed a C-section, but as he came into the world, they were given a sign. 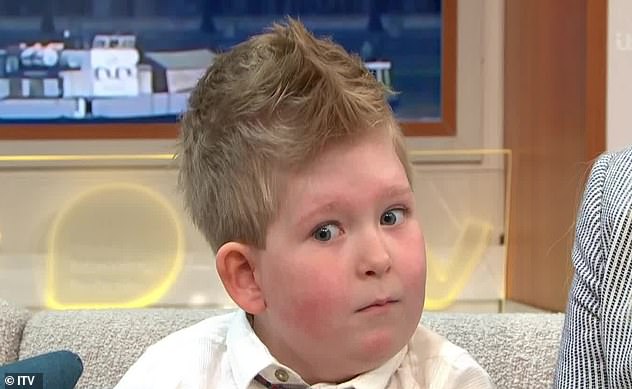 ‘He let out this amazing scream. We knew there was power there,’ Mr Wall said.

Now the family send regular updates to the doctors who told them Noah wouldn’t make it.

Mrs Wall said: ‘He’s extraordinary. We send them emails and pictures and we take them presents at Christmas time.’

Although Noah is confined to a wheelchair at the moment, the couple’s dream is to see Noah walk someday.

Hydrocephalus is a build-up of fluid on the brain.

The excess fluid can put pressure on the brain and which can damage it.

Noah developed congenital hydrocephalus present at birth, caused by the spina bifida he was also diagnosed with.

The condition can usually be treated using a shunt, a thin tube that’s surgically implanted in the brain and drains away the excess fluid.