D-Day for Nazanin: British citizen imprisoned in Tehran will find out TODAY if she will be freed as her husband says ‘we are closer than ever’ but is still preparing for the worst

Nazanin Zaghari-Ratcliffe expects to find out today whether she will be released from prison in Iran after the supreme leader announced 3,000 people are being pardoned as part of Eid.

Nazanin, 42, is a British-Iranian dual citizen who was accused of plotting to overthrow the Iranian government in April 2016, a charge she has denied.

Khamenei recently announced that prisoners who were initially sentenced to five years or less and had already served a third of their sentence, would be freed as part of the Muslim holiday.

Her lawyers will report to court in Tehran this morning to be told whether the mother-of-one will be one of the pardoned 4,000.

Richard Ratcliffe, Nazanin’s husband, told the Times: ‘It feels to me we are closer than we have been before.’

In March, as the coronavirus raced through Iran, Nazanin was removed from the infamous Evin prison in Tehran and placed under house arrest in the capital.

Nazanin Zaghari-Ratcliffe, who was arrested in April 2016 of ‘plotting to overthrow the Iranian government, is expected to find out whether she will be released today 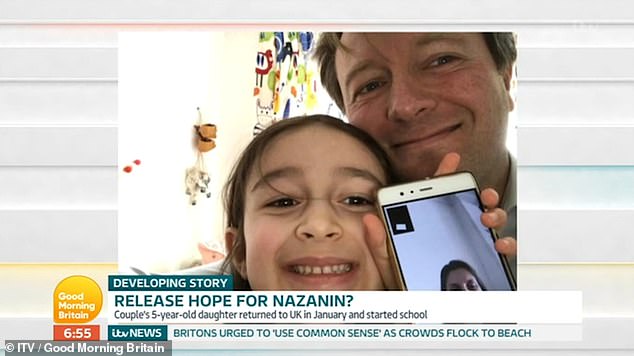 Pictured: Richard and his daughter, Gabriella, speak on Skype to Nazanin who is being held in Iran

Richard said he was feeling ‘euphoric’ when he heard his wife could finally be released, but he is preparing for the worst.

He told Good Morning Britain yesterday that she has been enjoying spending time with her daughter on video calls since being temporarily released. He revealed that she had been playing dolls with her five-year-old daughter Gabriella over Skype.

Speaking on GMB he said: ‘We are on the cusp of potentially good news.

‘Nazanin’s lawyer was being brought down in front of the prosecutor’s office tomorrow to get a decision on her clemency. So she could be on that list, we don’t know yet.’

Mr Ratcliffe said legally his wife should be on the list ‘because she meets all the criteria’, adding that the family is ‘hopeful’.

‘Nazanin’s been under lockdown for eight weeks,’ he said today. ‘No one can visit her because she’s a high level political prisoner.’

But he added: ‘It’s lovely to be able to speak on Skype to her.’ And he said that during the disruption of the coronavirus crisis, their daughter has been able to play with her mother over video chat.

‘For her the disruption has been mitigated by having Nazanin on the phone and playing dolls with her on Skype,’ he said. 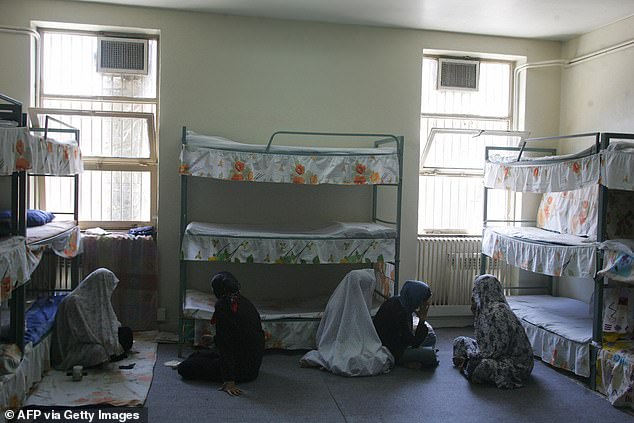 Iranian female inmates sit in their cell in the infamous Evin jail, north of Tehran, 13 June 2006

‘Part of me needs to prepare for the fact she might sent back to prison and then keep on campaigning and pressuring the government.’

He renewed his call for the government to do everything they can for his wife, despite Boris Johnson being consumed by the coronavirus pandemic.

‘He’s got a lot going on and the government always does have,’ he told the programme.

‘It’s clear the Foreign Secretary is following this case closely. When I met the Prime Minister back in January he was clear he wanted to do everything he could but after four years part of me doesn’t trust that it will happen.’