A mysterious epidemic is emerging in the wake of the coronavirus pandemic — a sudden upsurge of physical and vocal convulsions among teenagers, particularly girls, called ticcing.

However, clinicians are now reporting common new symptoms such as extreme convulsions, self-hitting and repeating particular words such as ‘beans’.

While the causes are unclear, tics conventionally first appear at around the age of five but improve over time and are temporary. The NHS describes them as ‘quite common’, affecting as many as one in five children.

Evie Meg: The influencer has 14 million followers and posts videos of her Tourette’s symptoms

However, in the wake of the pandemic, British clinicians are reporting a new kind of tic disorder that is far more extreme and comes on much more quickly. It is affecting teenagers and young adults, rather than children, and primarily strikes females.

The consensus among experts is that the condition may be a result of the psychological pressures of lockdown, with pandemic fear and climate change causing susceptible young people to ‘catch’ tics from social media influencers who expose their own symptoms online.

Dr Tammy Hedderly, a consultant paediatric neurologist at the Evelina London NHS Children’s Hospital, told Good Health: ‘We have at least doubled our referral rate for tics in the past few months, with more than 70 young girls being sent for professional help. It is a very concerning number.

‘As specialists, we’re seeing only the very severely affected cases, and it’s a small group of what could be much larger numbers.’

As well as appearing more in girls — and in a later age group than normally seen — the new tic condition’s symptoms are markedly different, says Dr Hedderly.

‘Normally tics have a gradual onset, but the new ones appear suddenly,’ she says. ‘These patients are typically presenting from the age of 13 to 15 with florid attacks that appear overnight.

‘And instead of being face and eye tics [such as twitching and eye rolling] they are full-body flailing movements and sometimes sudden-onset vocal tics, repetitive words and noises.’

Similar outbreaks are being reported by specialists in the United States, Germany, Denmark, France and Canada.

Last month, German psychiatrists sparked headlines by claiming that teenagers are ‘catching’ tics from social media sites such as TikTok and Instagram, where they watch influencers with Tourette’s syndrome (a disorder characterised by extreme tics and which, in rare cases, involves offensive or obscene utterances). 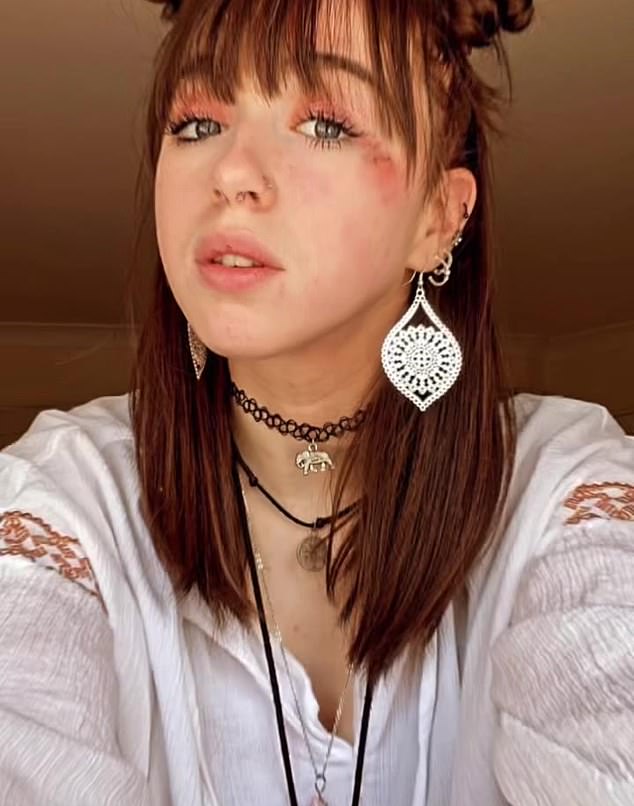 The theory is that young viewers then become compelled to mimic the physical and vocal convulsions they watch.

Writing in the journal Brain, Kirsten Müller-Vahl, a professor of psychiatry at Hannover Medical School, claimed that the phenomenon should be labelled a ‘mass social media-induced illness’.

Professor Müller-Vahl says that Germany is seeing a similar outbreak of tics as those reported by Dr Hedderly and other British specialists.

She identifies the source of this outbreak as a 23-year-old male social media influencer, Jan Zimmermann, who she says appears to have a mild form of Tourette’s and makes videos that show his symptoms on YouTube.

He is the ‘second most successful YouTube creator in Germany and enjoys enormous popularity among young people’, according to Professor Müller-Vahl.

She says that afflicted teenagers have developed ‘similar or identical functional ‘Tourette-like’ behaviours’ to Jan’s. His 296 videos have been viewed more than 300 million times since he started posting them in 2019, says Professor Müller-Vahl, who reveals that over the past two years, a ‘remarkably high number’ of young patients have been referred to her Tourette’s outpatient clinic.

She says they all display ‘nearly identical movements and vocalisations that not only resemble Jan Zimmermann’s symptoms but are often the exact same — such as shouting ‘Bombe’, ‘Heil Hitler’, and ‘Fliegende Haie’ [flying sharks], as well as throwing pens at school and dishes at home’.

While the new German patients are split evenly between males and females, Professor Müller-Vahl says this appears to be due to the original social media influencer being male.

She says colleagues at the University of Calgary in Canada tell her that their newly emerged ticcing patients are 90 per cent female — and she attributes this to the popularity there of a female British influencer called Evie Meg, 21, on TikTok, a video-sharing platform.

Evie, who has 14 million followers, lives in Durham and posts videos showing her Tourette’s symptoms. These include hitting herself repeatedly, swearing and making uncontrolled sounds.

But British specialists say explaining the ticcing outbreak as purely a result of viral internet videos is too simplistic.

Dr Hedderly says: ‘The German paper firmly places all of this on social media influence — but that is not necessarily how we are looking at the problem.’

She acknowledges that her team is seeing people with tics ‘that are very similar to the tics seen on social media’, but poses the question: ‘Why doesn’t everybody who watches this material go into tic-like florid attacks?’

Dr Hedderly believes there are multiple reasons for these tics emerging. ‘There has to be a focus on the individual,’ she says. ‘What predisposes them to tic?’ She suggests that patients may have underlying predispositions that in some cases are set off by watching influencers with Tourette’s.

Indeed, while British specialists report significant numbers of girls with this new ticcing disorder, repetitively uttering the word ‘beans’, which is one of Evie Meg’s common vocal tics, Dr Hedderly stresses that she and her colleagues have been seeing ‘tic-like episodes’ that aren’t conventional (Tourette’s) tics for many years.

‘What’s different is the sheer numbers of young people presenting now,’ she adds.

The unprecedented pressures of lockdown may be a significant contributory cause, Dr Hedderly suggests. ‘Stress may be unmasking a predisposition to tics in some patients, while in others it may be compounding an existing vulnerability to anxiety to the point of becoming overwhelming.’

Professor Jon Stone, a consultant neurologist at NHS Lothian, who is treating patients with the new ticcing condition, agrees that the stresses of the coronavirus pandemic and lockdowns may be a significant cause of the phenomenon, and that social media may worsen it.

This week: Use a different brush for your wisdom teeth

Swapping to a single tufted toothbrush can be more effective in cleaning difficult-to-reach areas such as the lower wisdom teeth, says Dr Conor McConville, a dentist in Manchester.

‘You could even dip the brush in Corsodyl mouthwash [which kills bacteria].’ He says that using a small brush helps because opening your mouth wide for a normal brush can make accessing the back teeth almost impossible.

‘Place the brush on the back teeth and close your mouth: this relaxes the masseter muscle [responsible for jaw movement] and makes it easier to brush these teeth.’

‘My sense is that the pandemic is important,’ he says. ‘What we have is a generation of teenagers who are having a very abnormal experience at home. Maybe tics are there in the ether as symptoms.

‘I saw two new patients last week, females aged 17 and 18 who had developed tics before the pandemic and, since lockdown, have had panic attacks and physical jerking and stronger tics,’ he says. ‘One had watched social media once or twice, but said it had very little to do with her tics. The other had watched social media and had realised it was making it worse, so stopped.’

Professor Stone argues: ‘People don’t find people on social media with tics unless they’re looking for them, and they’re looking because they themselves have got tics. We do know that when people with Tourette’s or tics watch others with tics, they have more symptoms.

He argues that, whatever the cause, clinicians need to recognise this outbreak as a medical problem and ensure patients receive appropriate help. ‘While social media is a factor in some patients, to say they’re just copying is unhelpful. The main issue is an unprecedentedly large group developing tics as teenagers.’

Nevertheless, he advises any young person who has begun to show symptoms: ‘If you stare at people ticcing all day, it might make your own symptoms worse. You might want to limit this.’

Dr Hedderly’s clinic treats patients using psychological approaches to help them shift their attention away from the tics, and to stop worrying obsessively about their next bout.

But, she says, there aren’t sufficient resources to treat this sudden eruption of ticcing.

‘Clinicians are trying to create resources at a fast pace, such as self-help techniques that they can learn.’

Meanwhile, she advises: ‘If a child or teenager has sudden tics, you may want to look into their use of social media that could make these movements worse.’