A British couple off on holiday to Portugal suffered a 4,000 mile journey from hell where they ended up at the same airport where they started 15 hours later.

Paul Davies, 71, and wife Ana, 60, were all set for sunny Madeira when they boarded their easyJet flight at Bristol Airport but ended up ‘getting absolutely nowhere’.

But their three hours and 40 minutes flight turned into a gruelling 15 hour ordeal due to bad weather.

Tantalisingly the Welsh holidaymakers ended up circling Funchal’s Cristiano Ronaldo International Airport twice only to turn back without landing.

They ended up back in Bristol nearly a day later after stops in Porto and Lisbon in Portugal.

Paul Davies, 71, and wife Ana, 60, were all set for sunny Madeira when they boarded their easyJet flight at Bristol Airport but ended up ‘getting absolutely nowhere’ 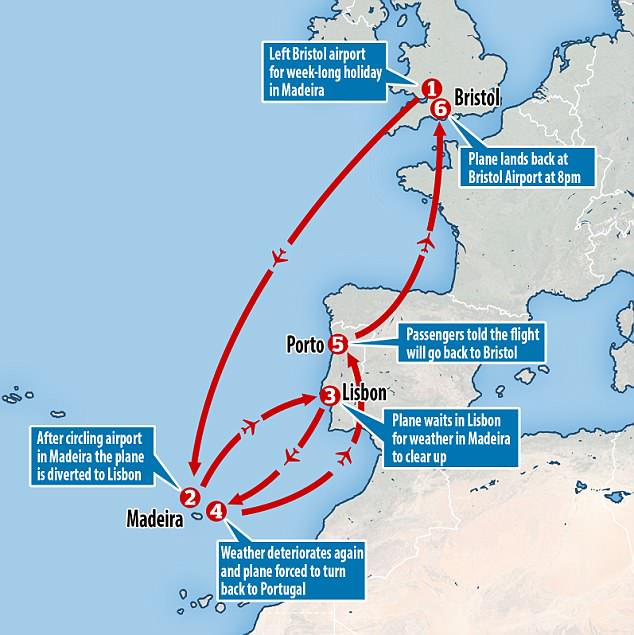 With 4,000 miles now under their belts – and no holiday – they arrived home 15 hours after they arrived at the airport.

Mr Davies, of Llanishen, Cardiff, said: ‘When we approached the island, the captain said that due to strong winds there me be a problem landing.

‘We circled for a while and then he said it was not possible to land so he said we would head back to Lisbon, which is an hour-and-a-half away, and rethink from there.

‘When we got there, they told us we weren’t able to get off the plane and if we wanted to stretch are legs we had to do it in the aisles.

‘After an hour-and-a-half they said the weather conditions had improved in Madeira so we’re going back.

‘After another hour-and-a-half, we got back to Madeira and we were circling again and again and then the captain came on and said things had deteriorated again and there are eight aircrafts who were ahead of us and unable to land.’

Wind conditions meant that the plane would be unable to land and had no alternative but to head back.

Passengers were then told they would have to stop in Porto and could off there instead of heading home – which 39 people did.

Paul said: ‘When we got to Porto, they told us they would have to get all the luggage off the plane and back on again which would take two hours.

‘They gave us a food voucher to go into the airport and once the 39 had disappeared the rest off us set off back for home.

‘We arrived in Bristol at 8pm and got back home around 10pm.

‘We had been travelling for around 15 hours and got absolutely nowhere. We did a little more than 4,000 miles and didn’t even get to our holiday.

‘It was an incredible experience. In 4,000 miles you can get to the west coast of America.

‘They did all they could and we have been told we should get a full reimbursement for the flight and accommodation.’

An easyJet spokesperson said: ‘easyJet would like to apologise to Mr and Mrs Davies for their experience due to the weather conditions preventing us to land in Funchal on 23 April.

‘The flight was unfortunately unable to land in Funchal as the winds were outside of aircraft limits.

‘As a result the captain diverted to Porto after weather conditions in Funchal continued to worsen and passengers were offered the opportunity to disembark there or to return to Bristol.

’39 passengers chose to stay in Porto with the remainder, including Mr and Mrs Davies, returning to Bristol.

‘We provided passengers in Bristol with hotel accommodation if required and the option to transfer onto the next available flight or receive a full refund.

‘Whilst the reason for the flight cancellation was outside of easyJet’s control, easyJet would like to apologise and understands how disappointing it would have been for passengers. We have apologised to Mr and Mrs Davies and are in contact with them directly.

‘The safety and wellbeing of passengers and crew is always easyJet’s highest priority.’