British diplomats stationed in Russia have begun leaving Moscow after being kicked out of the country in the row over the Salisbury poison attack.

UK embassy staff gathered outside in the snow and applauded their colleagues as vans carrying the 23 expelled diplomats drove away.

They have been booted out by the Russian authorities in a tit for tat retaliation after 23 Kremlin spies were expelled from Britain on Tuesday following the nerve gas attack.

The secret agents flew out of Stansted on a private jet on Tuesday after being given seven days to pack their bags and leave by Theresa May.

The departure of the Britons in Moscow came as the EU dramatically recalled its ambassador from Moscow overnight in a new show of support for the UK. 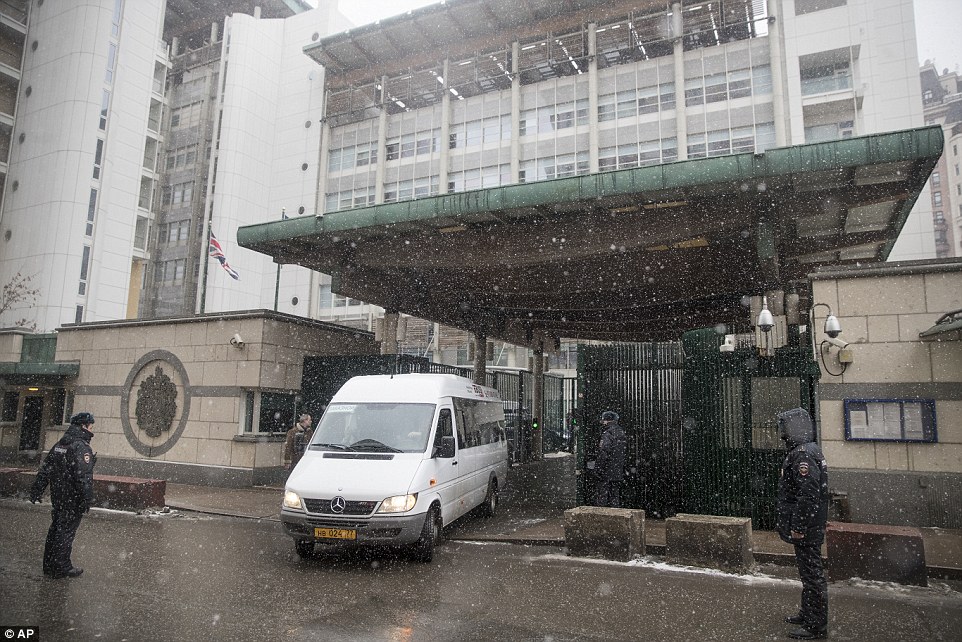 British diplomats stationed in Russia have begun leaving Moscow after being kicked out of the country in the row over the Salisbury poison attack. 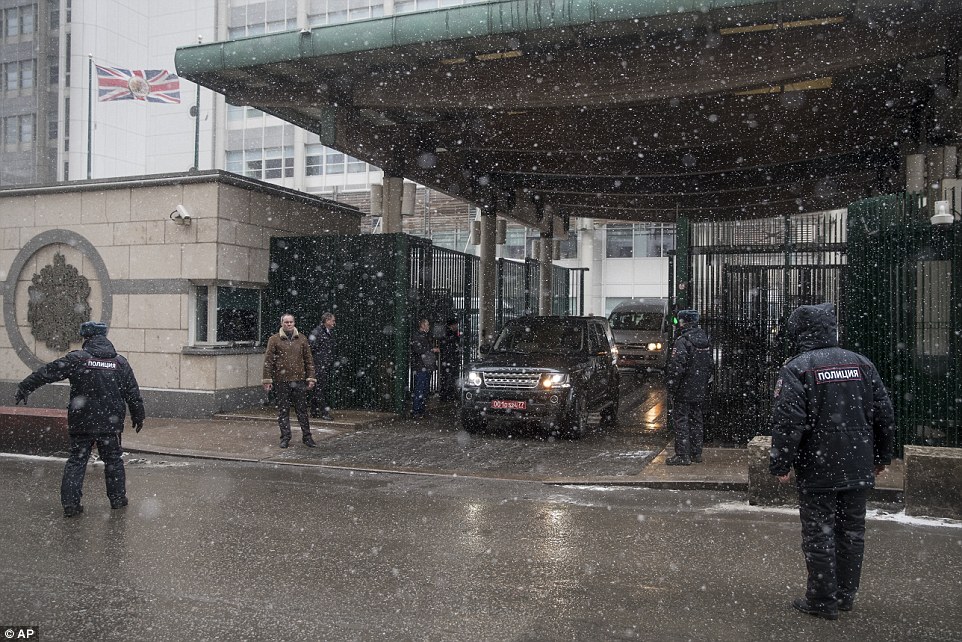 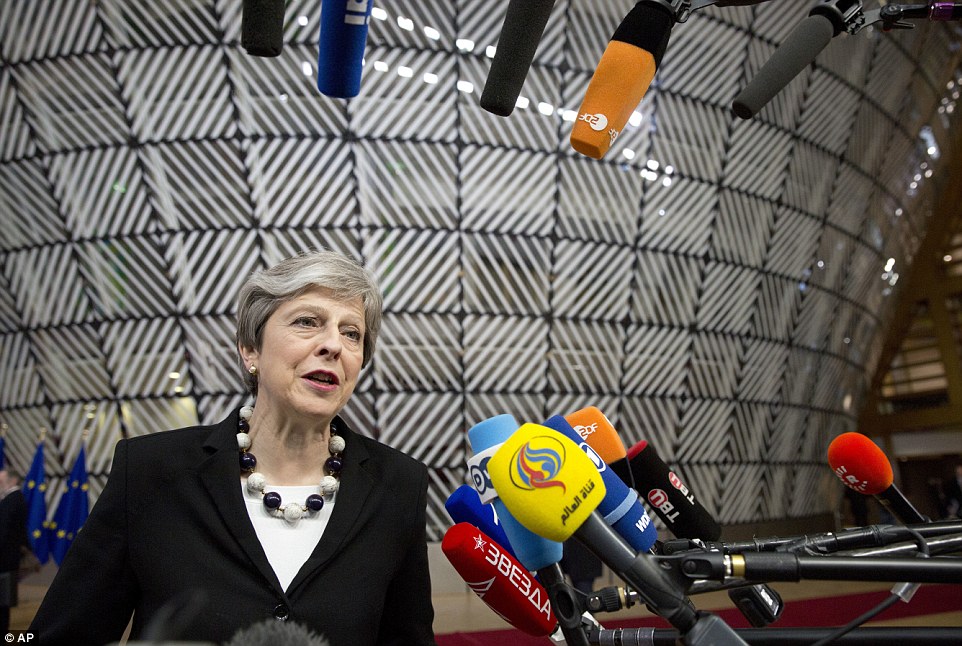 Sources said France, Poland, Latvia, Estonia and Lithuania are among a string of EU states who said they may boot out diplomats. Pictured: Prime Minister Theresa May arriving at the EU summit this morning 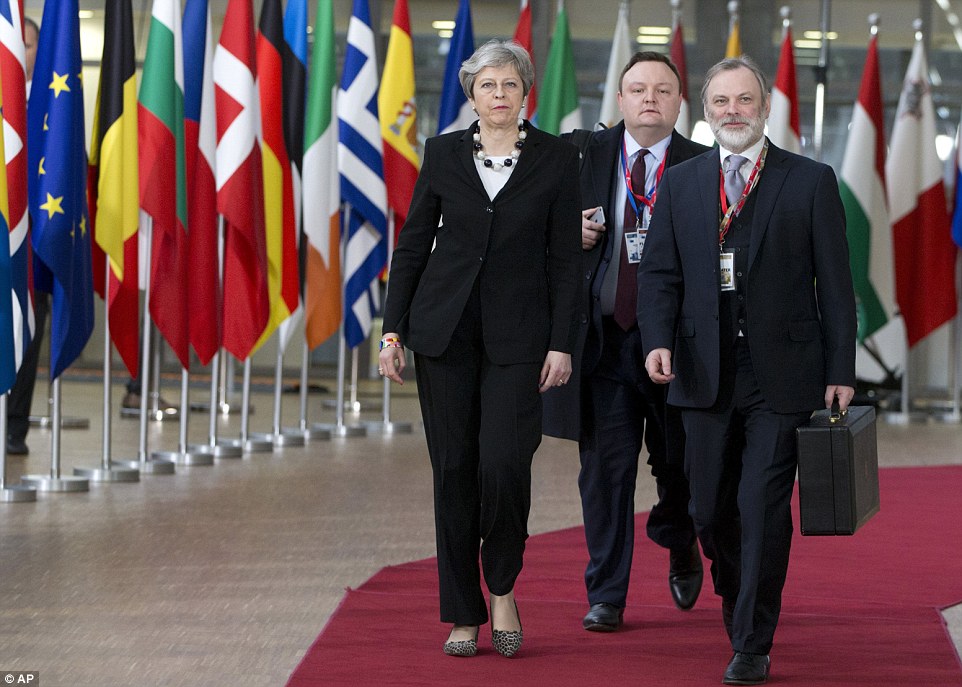 Kremlin spies face being purged from across Europe as five nations prepare to follow Britain’s lead in expelling diplomats over the attempted murder on Britain’s streets.

The EU ambassador is officially being recalled for consultations and has not at this stage ended his work in the Kremlin.

The departure of Britain’s diplomats come after Moscow’s spies – who were living in Britain under diplomatic cover – left the UK on Tuesday.

Friends of the expelled staff gathered on the street to bid them farewell as they were driven away form the Russian embassy in Kensington Gardens.

Russian Ambassador Alexander Yakovenko bade farewell to the expelled diplomats and their families – around 80 in all and including many children taken out of school in London to be sent to Russia.

‘A fantastic plane was sent over,’ said the ambassador.

As the diplomatic stand-off between Britain and  Russia continues, Mrs May received a major boost last night when the EU backed her and laid the blame for the attack on Moscow. 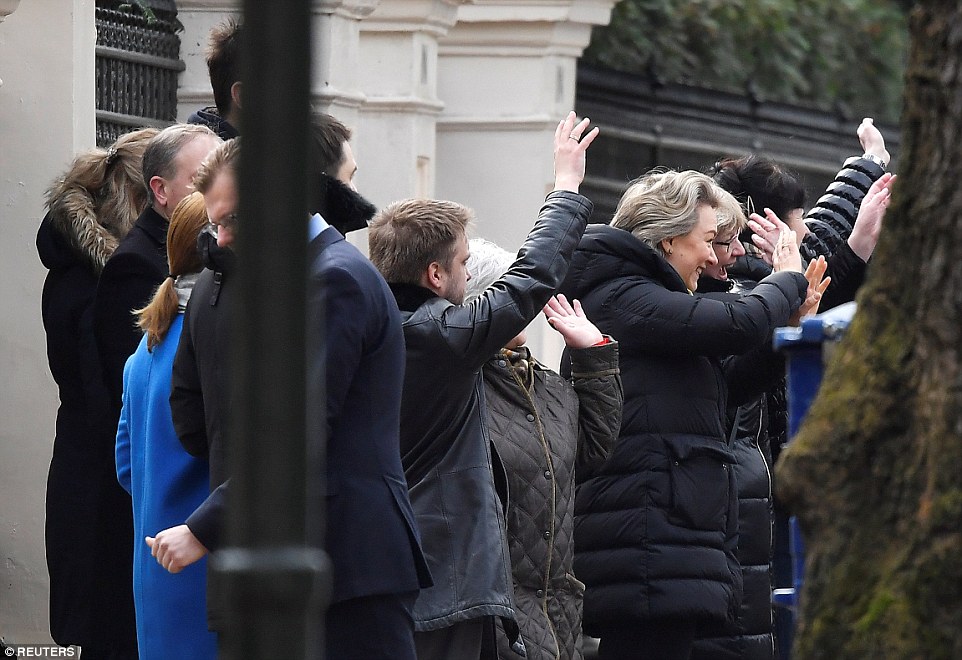 The departure of Britain’s diplomats come after Moscow’s spies – who were living in Britain under diplomatic cover – left the UK on Tuesday. Friends of  the banished spies waved goodbye as they were driven away 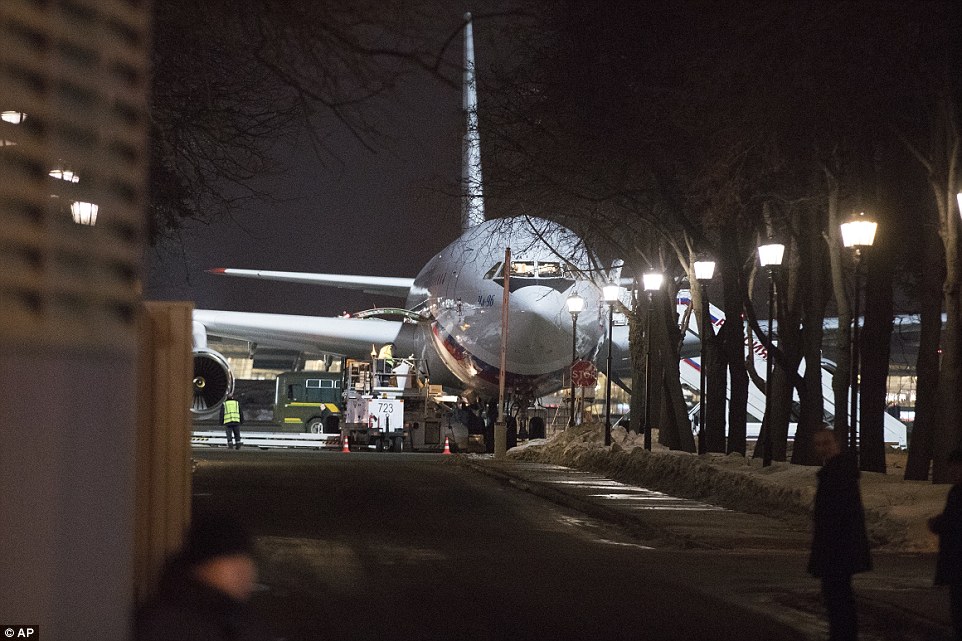 The plane which carried Russian diplomats and their family members ordered to leave Britain as part of a standoff over a nerve agent attack on British soil, at Vnukovo 2 government airport outside Moscow

The signal is the latest tangible sign of support as international outrage over the attack on Sergei Skripal grows.

Sources said France, Poland, Latvia, Estonia and Lithuania are among a string of EU states who said they may boot out diplomats.

He wrote: ‘Glad to know that detective sergeant Nick Bailey has been discharged from hospital. Hoping for recovery of Sergei and Yulia Skripal, too.’

It comes after Mrs May and EU leaders agreed to stand together against Russia in the wake of what they branded the ‘reckless’ attempted of Mr Skripal and his daughter Yulia on March 4. 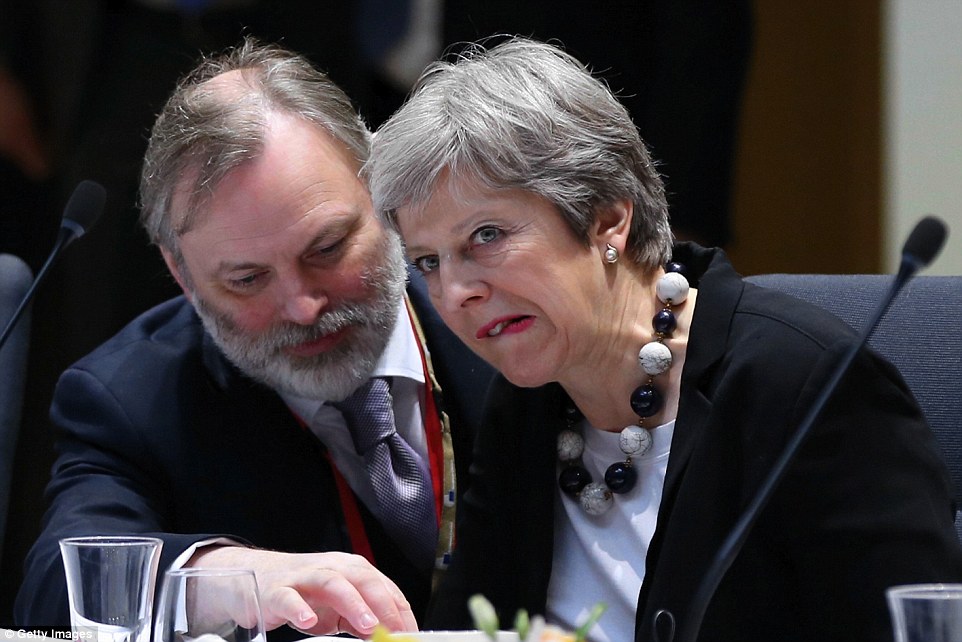 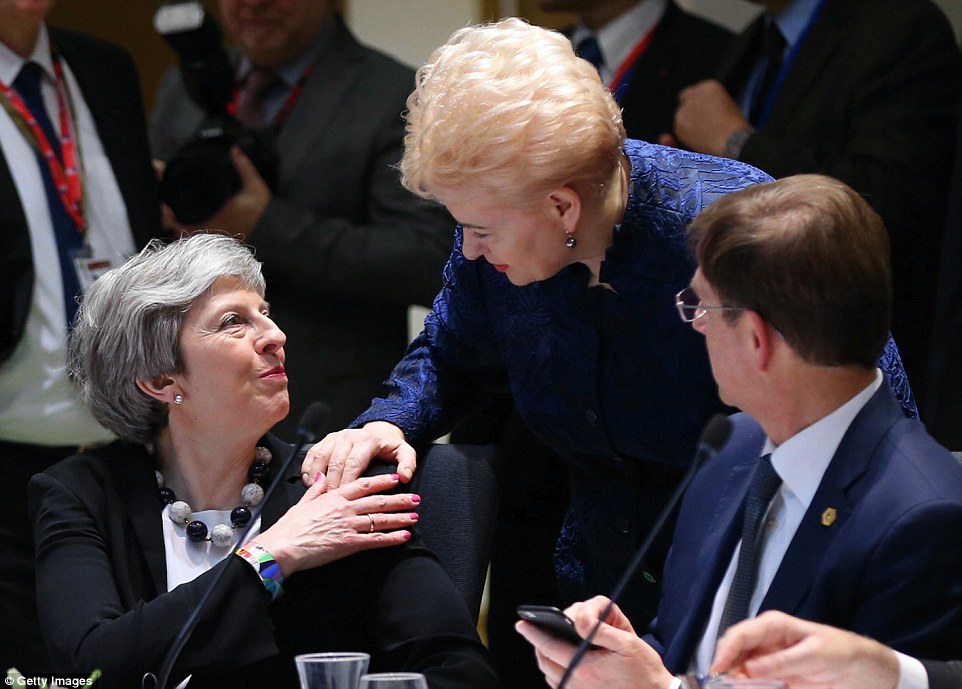 Theresa May speaks with Lithuanian President Dalia Grybauskaite in Brussels this morning. Lithuania is one of the countries which is said to be considering kicking out Russian diplomatic staff as well

The decision came after Mrs May gave EU leaders at the European Council summit in Brussels a detailed account of the evidence which led the UK to point the finger of blame at Moscow.

European Council president Donald Tusk wrote on Twitter: ‘European Council agrees with UK government that highly likely Russia is responsible for Salisbury attack and that there is no other plausible explanation.’

The announcement came as reports suggested that as many as five EU countries – France, Poland and the three Baltic states – are considering following Britain’s lead by expelling suspected Russian spies.

Foreign ministers of the 28-nation bloc issued a statement on Monday voicing ‘unqualified solidarity’ with the UK, but stopping short of pointing the finger of blame at Moscow for the March 4 attack on ex-spy Sergei Skripal and his daughter Yulia.

EU leaders also decided to recall the bloc’s envoy to Russia ‘for consultations’.

‘The leaders agreed to withdraw the EU ambassador to Moscow for consultations,’ the source told AFP on condition of anonymity. ‘It is a show of intent.’ 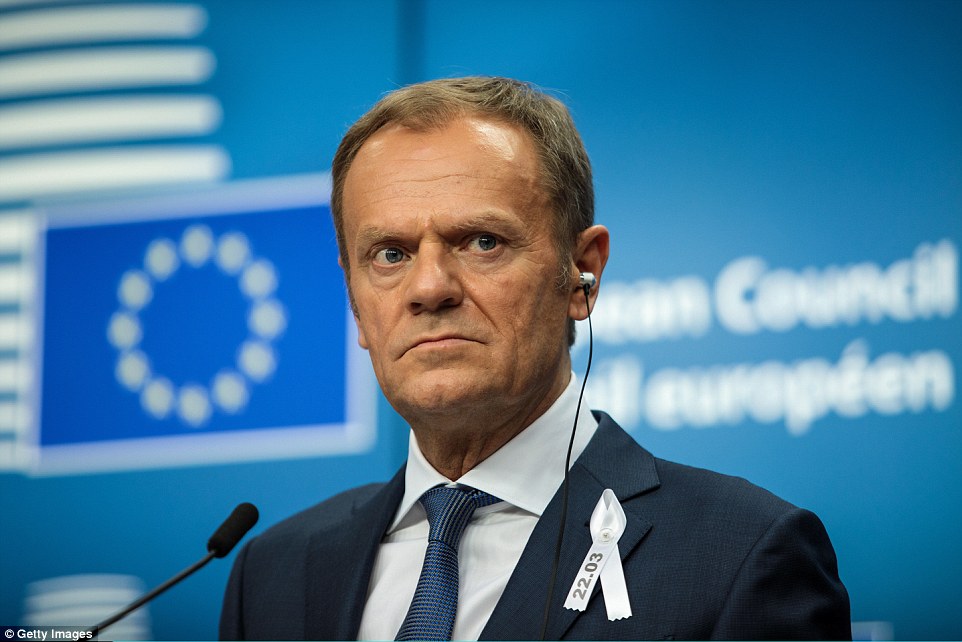 Leaders of the 28 EU states agreed with the UK that it is ‘highly likely’ Russia is responsible for the Salisbury nerve agent attack, European Council president Donald Tusk (pictured) has said 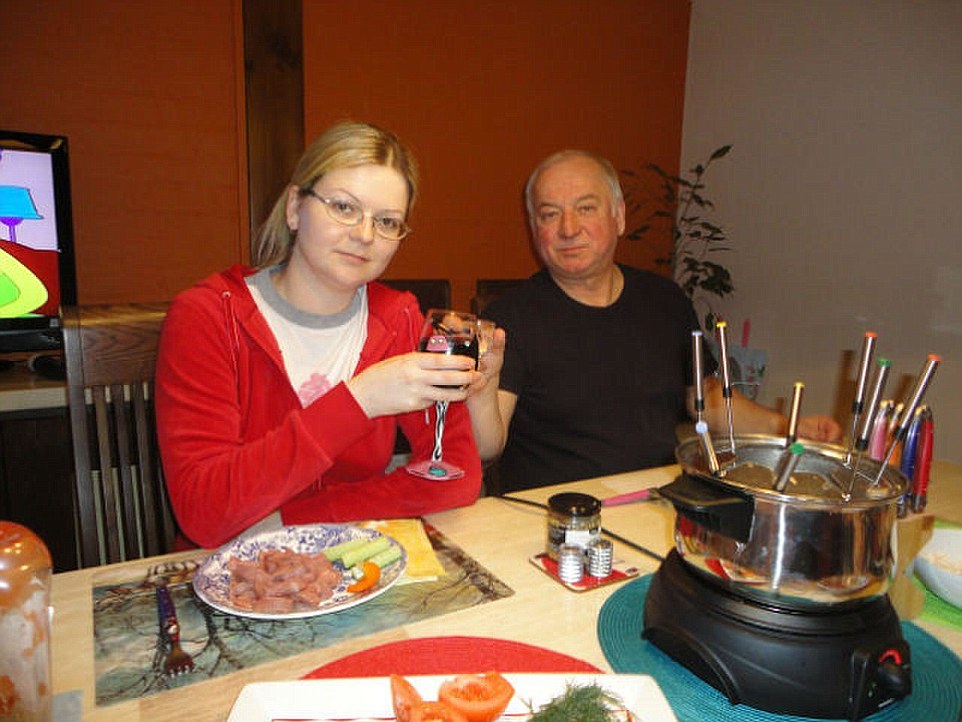 Mrs May said the European Council is ‘standing together’ on the Salisbury attack and ‘the threat that Russia poses respects no borders and it is a threat to our values’.

Mrs May had earlier spoken separately with French president Emmanuel Macron and German chancellor Angela Merkel at the summit in Brussels, where the trio agreed there was ‘no plausible explanation other than that the Russian state was responsible’ for the poisoning of Sergei and Yulia Skripal.

At a press conference in Brussels, European Council president Donald Tusk and Commission president Jean-Claude Juncker dodged a question of whether they shared Britain’s assessment that Russia is now ‘a strategic enemy, not a strategic partner’, saying only that the Salisbury attack would be discussed later.

But several EU leaders, including Angela Merkel, voiced solidarity with the UK.

Resistance to a firmer line with Moscow was apparently coming from Greece, whose prime minister Alexis Tsipras said: ‘We have to express solidarity to the British people for the Salisbury case, but we also need to be responsible on that issue.’

Arriving at the summit, Mrs May said she would tell fellow leaders that she sees the attack on Mr Skripal as part of a pattern of Russian aggression which threatens the continent’s democracies and requires a united response. 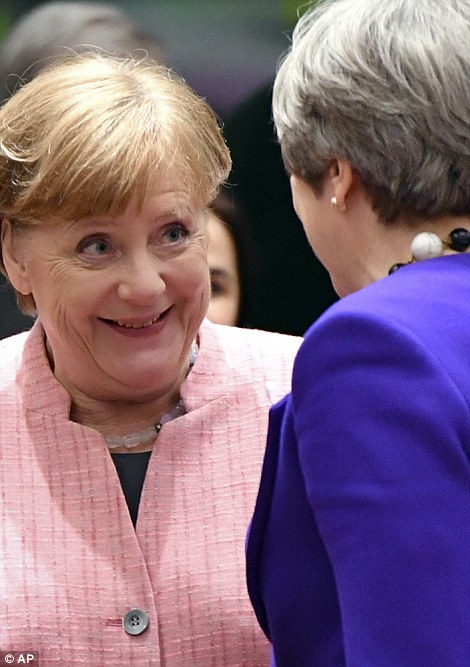 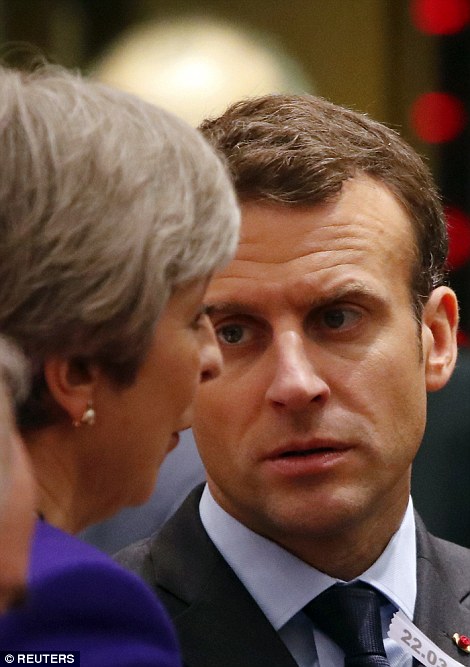 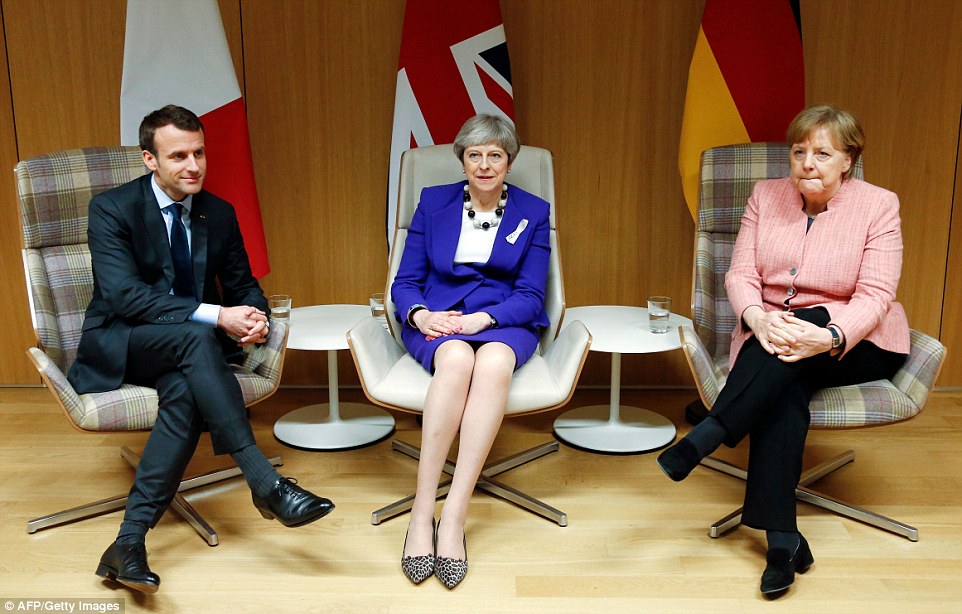 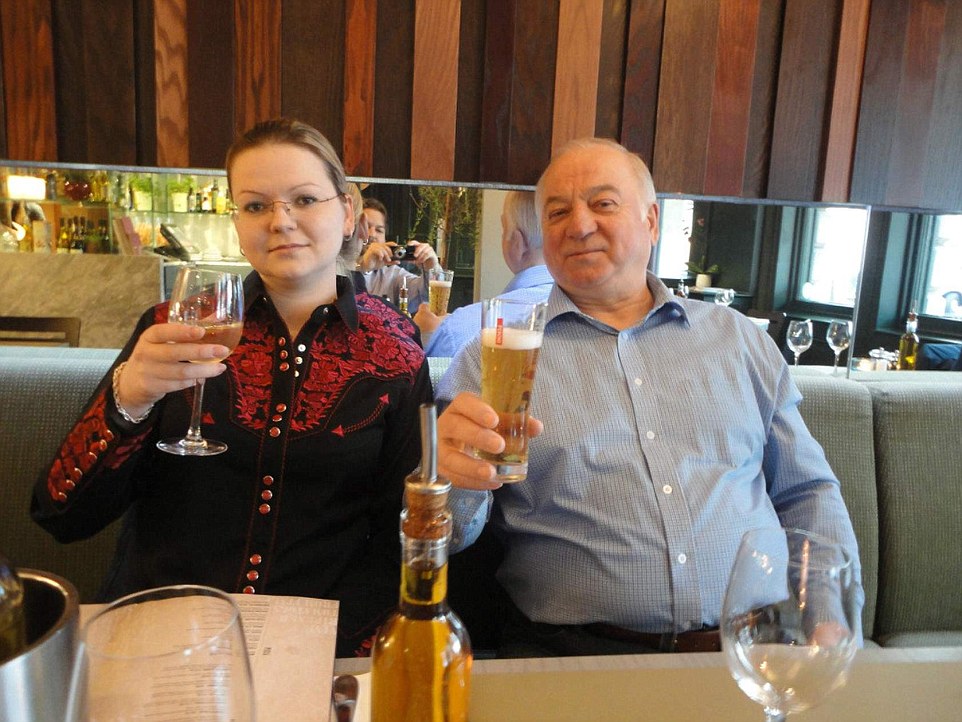 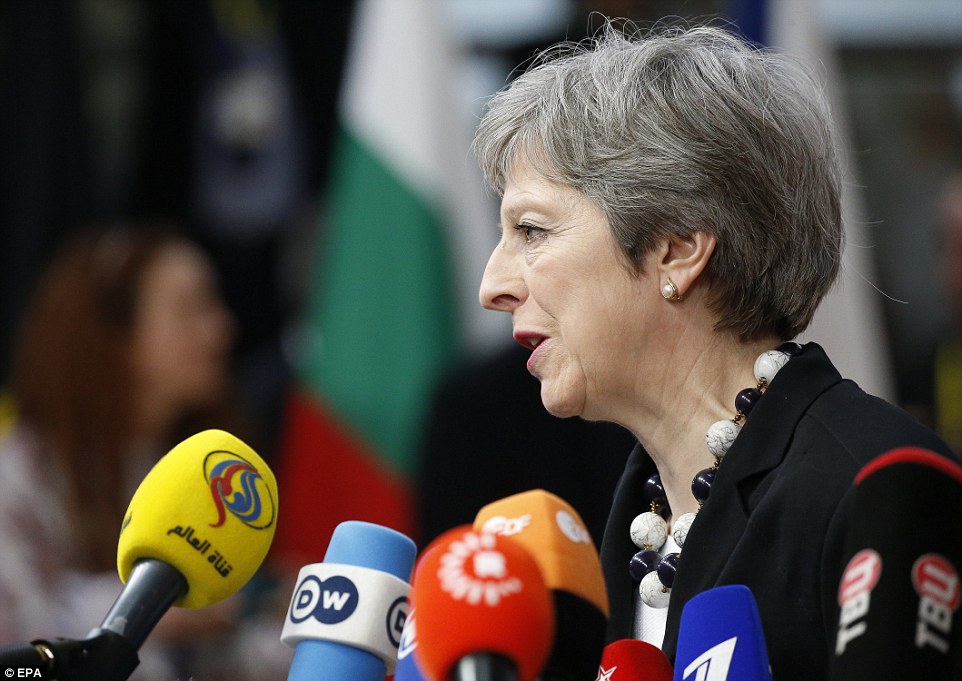 Arriving at the summit today, the Prime Minister said Vladimir Putin ‘s ‘brazen and reckless’ flouting of international law represents a threat democracies across the continent. She was greeted by Jean-Claude Juncker as she spoke 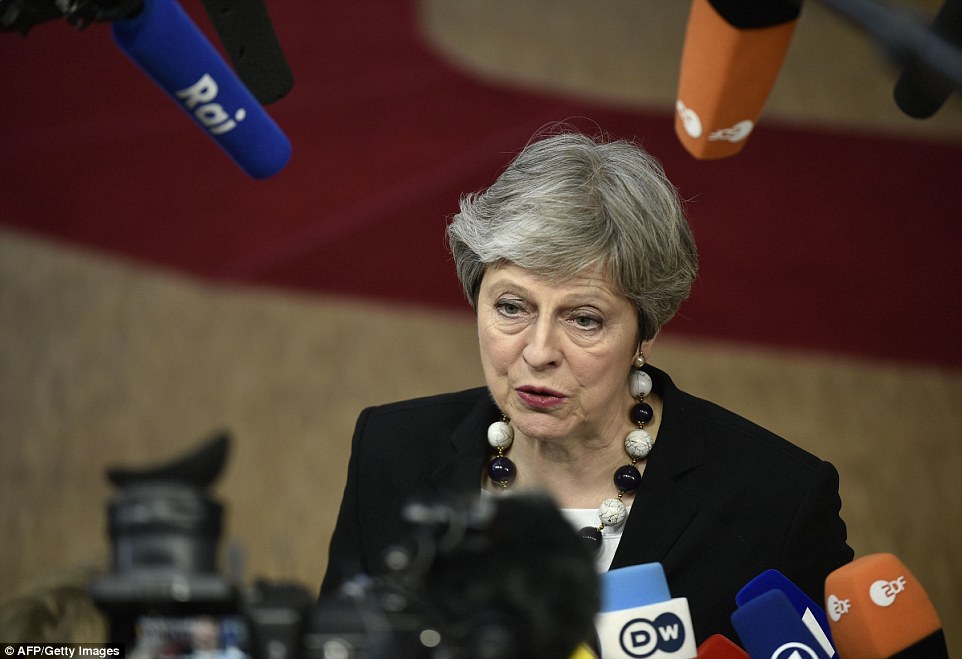 Wearing a white ribbon in commemoration of terror attacks in Westminster and Brussels, the Prime Minister said: ‘Russia staged a brazen and reckless attack against the United Kingdom when it attempted the murder of two people in the streets of Salisbury.

Russian ambassador hits back at Boris

The Russian ambassador today lashed back at Boris Johnson over his claim that Vladimir Putin is coping Hitler by glorying in the World Cup.

Alexander Yakovenko said the Foreign Secretary’s comparison to the 1936 Olympics in Germany was ‘insulting’, arguing that Russia ‘defeated the Nazis’.

He said Britain was accusing Moscow of being behind the Salisbury poisoning despite having ‘no evidence’.

At an extraordinary press conference in London, Mr Yakovenko also risked inflaming the row by wishing Sergei Skripal and his daughter Yulia a ‘speedy recovery’ from their exposure to the military-grade nerve agent.

And he refused to say that Russia would accept the conclusions of international chemical experts on the use of Novichok.

‘I will be raising this issue with my counterparts today because it is clear that the Russian threat doesn’t respect borders and indeed the incident in Salisbury was part of a pattern of Russian aggression against Europe and its near neighbours from the western Balkans to the Middle East.’

The text of a statement on the Salisbury attack as agreed by the leaders of the EU’s 28 member states at the European Council summit in Brussels.

It read: ‘The European Council condemns in the strongest possible terms the recent attack in Salisbury, expresses its deepest sympathies to all whose lives have been threatened and lends its support to the ongoing investigation.

‘The use of chemical weapons, including the use of any toxic chemicals as weapons under any circumstances, is completely unacceptable, must be systematically and rigorously condemned and constitutes a security threat to us all.’

A Number 10 spokesman added: ‘The Prime Minister also outlined our knowledge that Russia has previously produced this agent; Russia’s record of conducting state-sponsored assassinations; and our assessment that Russia views some defectors as legitimate targets for assassinations.’

‘Nobody has the right to insult the Russian people, who defeated the Nazis,’ he said.

Mr Yakovenko demanded evidence for Britain’s allegation that Russia was behind the Salisbury attack, saying official statements on the poisoning had been ‘wild’ and the UK had ‘built its official position on pure assumptions’. 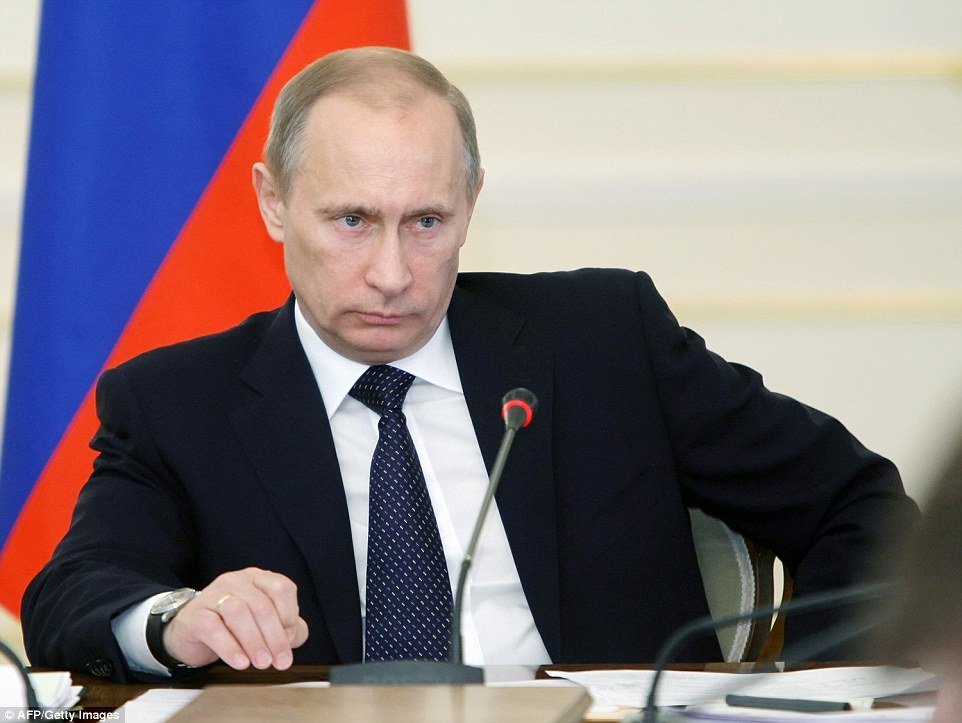 The response of the Government had created ‘serious problems’ in the Russia-UK relationship, he said.

Mrs May’s warning came as a British police officer who was also contaminated in the March 4 attack was released from hospital.

In a statement read by Wiltshire Police Chief Constable Keir Pritchard on his behalf, DS Bailey explained that the experience of his poisoning had been ‘completely surreal’.

Downing Street declined to say whether she would raise concerns over Jean-Claude Juncker’s controversial letter congratulating Mr Putin on his re-election as president.

The European Commission chief argued for ‘positive relations’ between the EU and Russia and did not mention the Salisbury incident.

Asked by reporters in Brussels whether he regretted writing the letter, Jean-Claude Juncker said Mrs Merkel had said the same things. 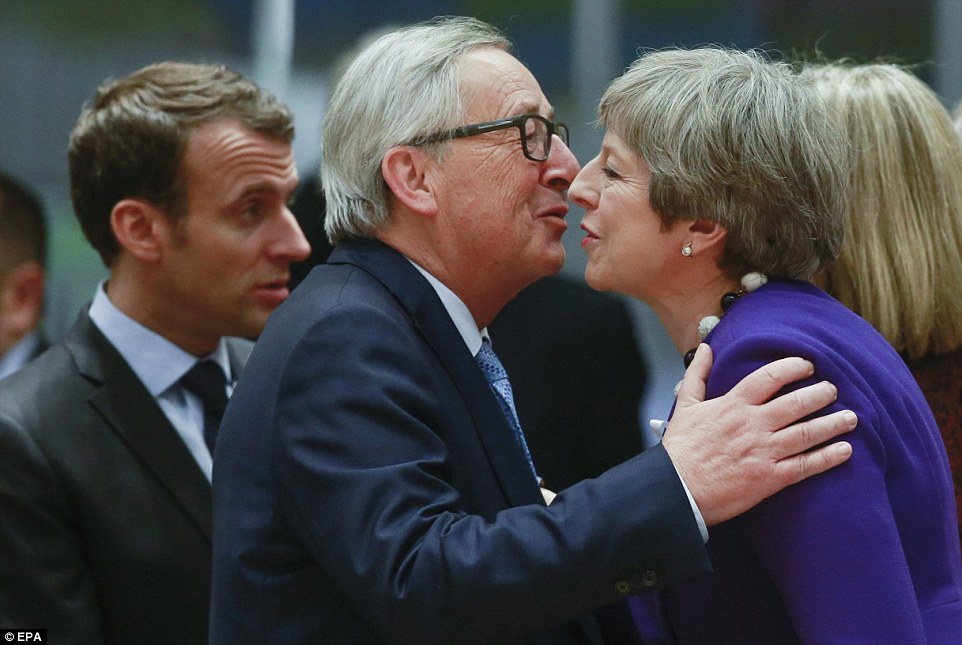 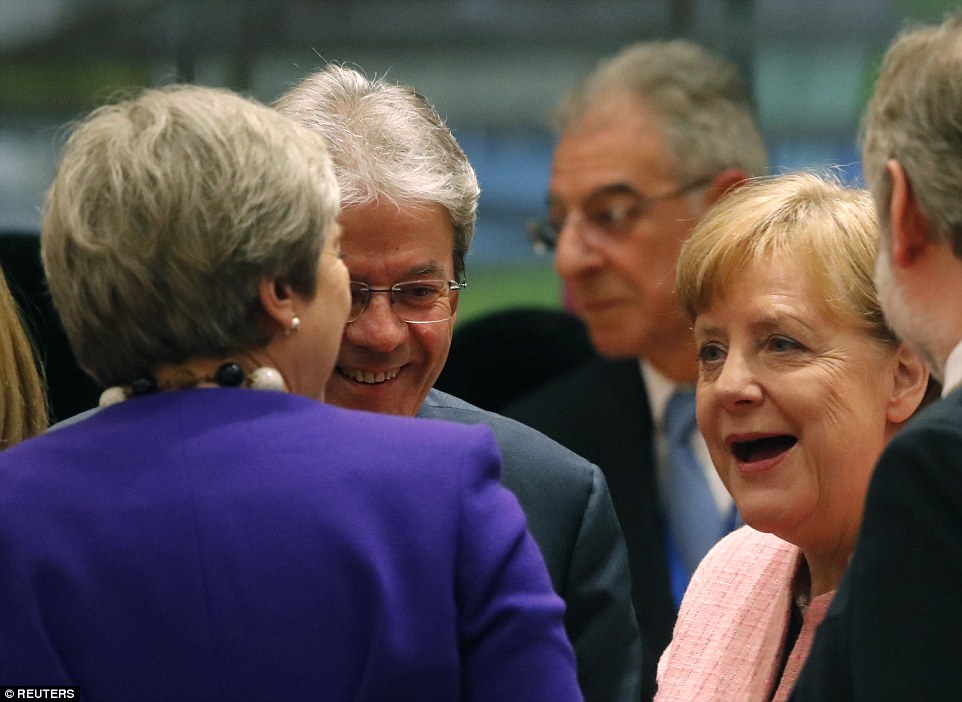 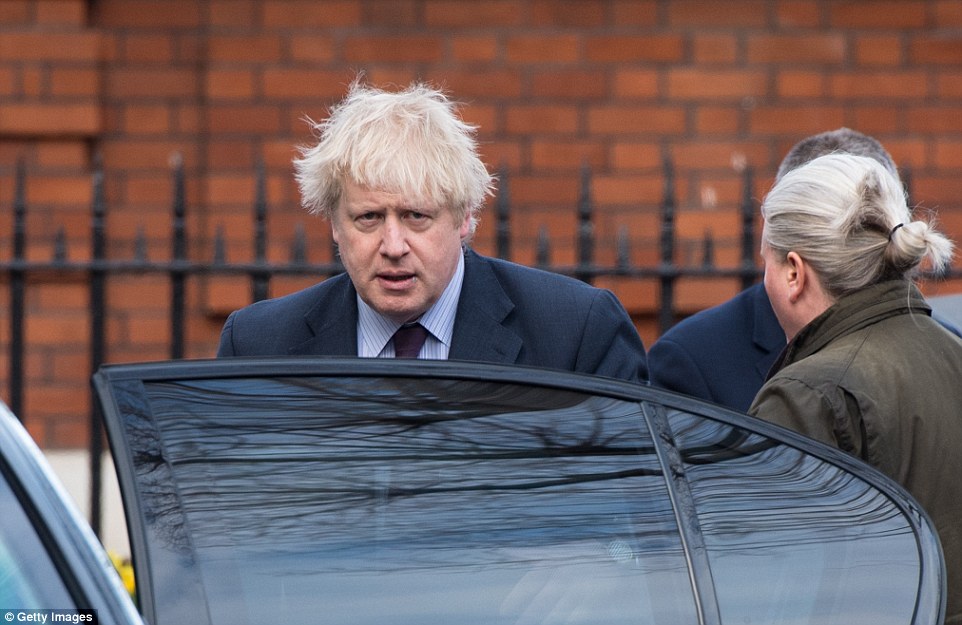 However, Mrs Merkel actually said she hoped Mr Putin’s next term in office was ‘successful’ rather than congratulating him.

EU council chief Donald Tusk said yesterday that ‘after the Salisbury attack I am not in the mood to celebrate president Putin’s reappointment’.

In a mark of the decisive shift in Britain’s view in the wake of incidents ranging from the Litvinenko and Skripal poisonings to military interventions in Georgia and Ukraine and cyber interference with Western elections, one senior Whitehall official said Russia had shown itself to be ‘a strategic enemy, not a strategic partner’.

However the official stressed that Britain’s response to the Salisbury attack had been carefully calibrated to remain within the law, and that the UK ‘is not looking for confrontation or regime change’.