If Prince Harry and Meghan choose to write memoirs about their lives, they will likely start a bidding war between publishing houses and procure eight-figure advances.

Fans would love to read about their vastly different childhoods and how their lives became entwined when they were brought together through a mutual friend.

Their love story is one for the ages, and while they have shared bits and pieces about their courtship, people are still clamoring for more information about the highs and lows of their romance.

In 2017, the Obamas scored a joint book deal at Penguin Random House worth a reported $65 million — an unprecedented amount for a presidential memoir.

While Barack’s upcoming book has yet to be released, Michelle’s autobiography, Becoming, sold 1.4 million copies in the first week and went on to become the best-selling book in the U.S. in 2018.

As of March 2019, it sold more than 10 million copies and was on track to become the best-selling memoir of all time.

Prior to Barack and Michelle’s record-breaking deal, Bill Clinton was given a hefty $15 million advance for his 2004 autobiography, My Life.

He has written four books since leaving the White House in 2001. Most recently, he published his first best-selling novel, The President is Missing, which he co-wrote with superstar author James Patterson. 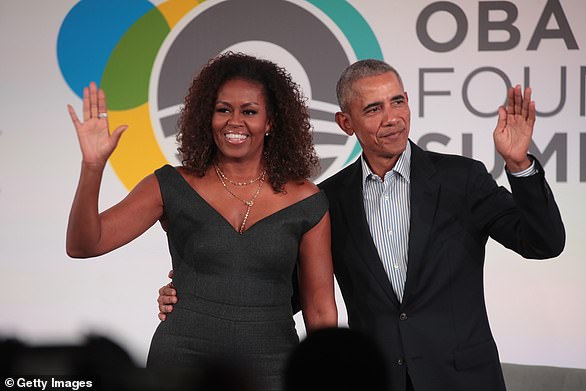 Barack and Michelle Obama (pictured in Chicago last October) scored a reported $65million advance as part of their joint book deal, and it’s possible the royals can bring in even more

His wife, former Secretary of State Hillary Clinton, has written numerous books as well. She earned a reported $8 million dollar advance for her 2003 memoir, Living History, and a believed $14 million for her 2014 follow-up, Hard Choices.

If Harry and Meghan aren’t willing to get personal, there are other options.

Hillary and her daughter Chelsea recently co-wrote and published The Book of Gutsy Women: Favorite Stories of Courage and Resilience, which features portraits of female role models who inspire them.

Now that they’re parents, the Duke and Duchess of Sussex may want to follow in Chelsea’s footsteps and write children’s books focusing on topics they’re passionate about. 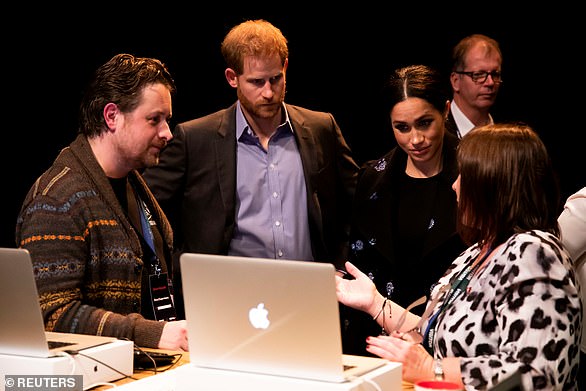 Potential: It’s possible Harry and Meghan will start their own production company like the Obamas and start producing their own documentaries and podcasts 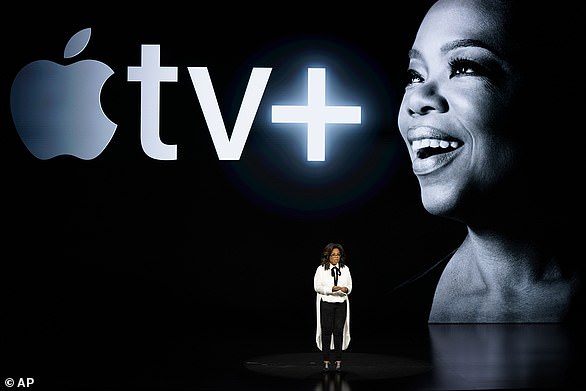 In the game: Harry has already teamed up with Oprah to create a multi-part documentary series about mental health that will air on the Apple TV platform this year

The Duke and Duchess of Sussex are both activists in their own right, so it’s not hard to imagine them getting into film and television production to raise awareness for the causes that are important to them.

Harry has already teamed up with Oprah to create a multi-part documentary series about mental health that will air on the Apple TV platform this year.

Millions of viewers tuned in to watch them open up about the struggles they’ve faced as a couple in their emotional 2019 documentary, Harry & Meghan: An African Journey, a testament to their built-in fan base.

It’s possible they’ll take a cue from the Obamas and start their own production company to pitch their passion projects.

It was announced in 2018 that Barack and Michelle had signed a multi-year deal to produce movies, series, and documentaries for Netflix through their production company, Higher Ground.

It’s unclear how much the former president and first lady made off the deal, but those who have signed onto similar agreements are set to make millions.

Shonda Rhimes, who created Grey’s Anatomy and Scandal, signed a five-year deal with Netflix in 2017 that is estimated to be worth $150 million.

The following year, American Horror Story creator Ryan Murphy reportedly scored up to $300 million when he inked his own five-year deal with the streaming giant. 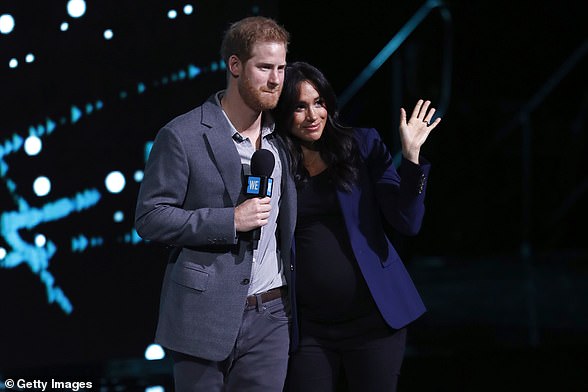 Taking the mic: The Obamas and Clintons command six-figure fees for speaking engagements, and experts believe Meghan and Harry can easily do the same 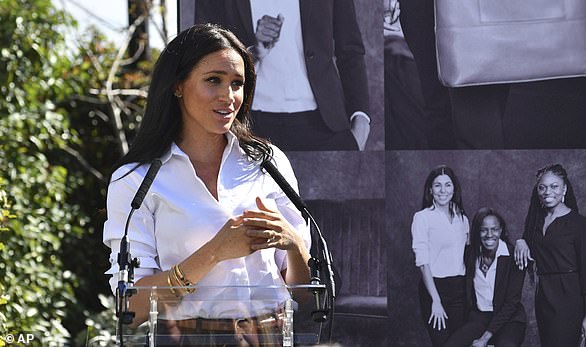 At the podium: Meghan has a passion for using her voice to promote awareness for the causes near and dear to heart. She’s pictured at the launch of her charity clothing line in September

The U.S.’s former presidents and first ladies are taking home millions of dollars from their public appearances, so why can’t royals?

Barack Obama, Bill Clinton, and George W. Bush have all made a pretty penny from their six-figure speaking fees over the years.

After leaving the White House, Barack started commanding a reported $400,000 per speaking engagement, while his wife, Michelle, has been said to make $200,000.

And according to CNN analysis, Bill and Hillary have earned more than $153 million in paid speeches from 2001 until the former secretary of state launched her 2016 presidential campaign.

Jeff Jacobson, co-founder of the Talent Bureau speaking agency, says the couple would get at least $100,000 per appearance, and Harry could get up $500,000.

He told Bloomberg: ‘I would imagine they are going to start having these conversations ASAP, if they haven’t already. I suspect they will both get on the circuit, and it will be one of Harry’s primary revenue streams.’

And it won’t just be one-off appearances that Meghan and Harry can earn money from; if, as experts predict, the two choose to follow the Obamas’ lead and sign a book deal, they could go on to rake in a fortune from a subsequent book tour – as former FLOTUS Michelle recently did.

When Michelle launched her book tour back in 2018, the costs of tickets shocked some fans, with prices ranging from $29.95 for general admission to $3,000 for a VIP package which included a front row seat, a photo with Mrs. Obama and a signed book. 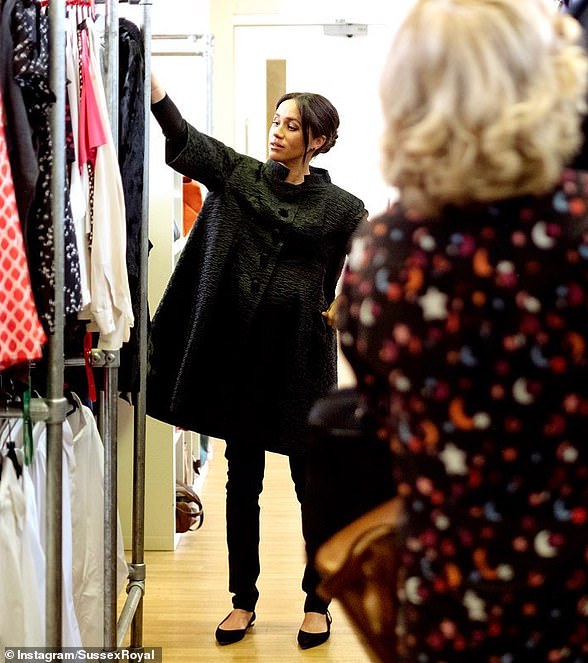 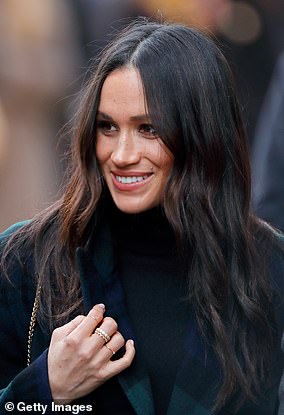 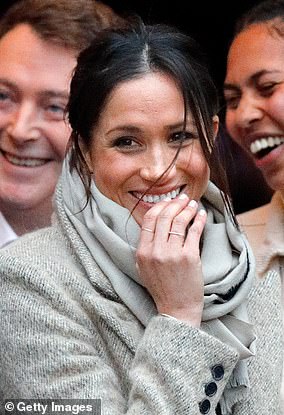 Walking advertisement: Catbird, the jewelry brand behind Meghan’s favorite thin, stackable gold ring revealed 20,000 people have snapped up the band since she was seen wearing it

When it comes to fashion, Meghan has the magic touch. Whatever the actress-turned-royal wears sells out almost immediately, making her any brand’s dream partner.

The Duchess of Sussex has many friends in the fashion industry, including tennis star Serena Williams and designer Misha Nonoo, who both have their own clothing lines.

Meghan’s close pal Jessica Mulroney also happens to be a famous stylist who has been credited with helping indie Canadian fashion brands get their start.

Jessica can easily help her connect with brands, though the royal likely doesn’t need the help.

Editorial: The Duchess of Sussex guest-edited the September issue of British Vogue in 2019

Last year, Meghan guest-edited British Vogue, and she is said to be close with the magazine’s editor-in-chief Edward Enninful as well as American Vogue’s Anna Wintour.

The Duchess of Sussex combined her love of fashion and philanthropy in 2019 to launch a capsule clothing line to benefit Smart Works, a charity that provides clothes and coaching to unemployed women.

The collection was created in partnership with Misha, the clothing brand Jigsaw, and the department stores Marks & Spencer and John Lewis. For each item that was purchased, one was donated to the charity.

And if she so chooses, Meghan could also revive her lifestyle blog, The Tig, which she launched in 2014 and used to share her favorite things with her fans.

She abruptly shut down the site in April 2017, taking down all the posts she had shared over the previous three years. Meghan and Harry’s engagement was announced in November 2017.

However, Meghan recently filed documents in the U.S. aiming to keep the rights to the blog’s name until 2021.

A palace spokesperson made it clear that the lasting trademark is to ‘prevent false branding, but she could always have a change of heart. 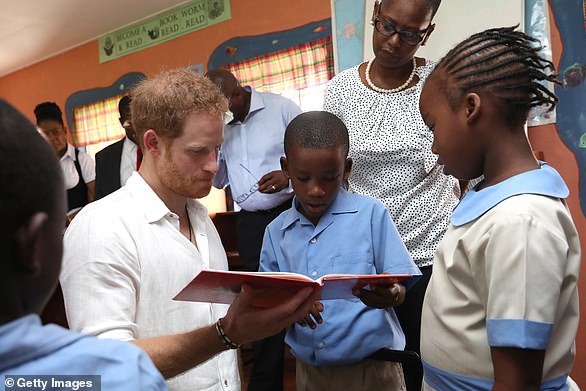 Mystery project: Philanthropy is a large part of Harry and Meghan’s lives, and they revealed they will be launching a new ‘new charitable entity’ 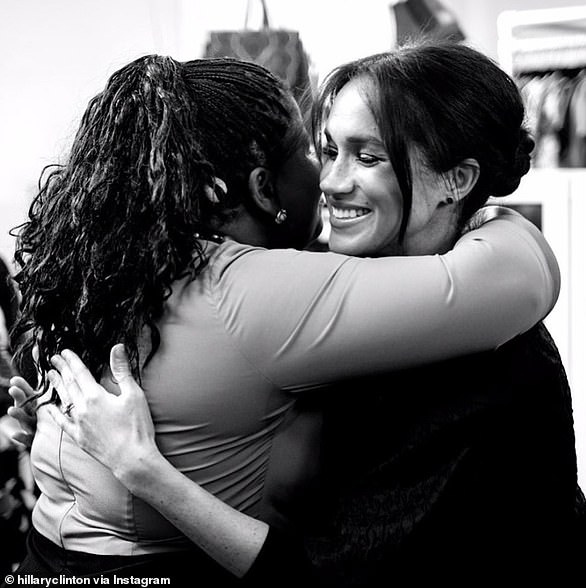 Going their own way: Though they likely won’t make money from their charitable endeavors, the new venture will certainly help them carve out their new identities

Philanthropy is a large part of Harry and Meghan’s lives, and in their statement announcing their decision to step down from senior royal duties, they said they will be launching a ‘new charitable entity.’

The couple didn’t share any additional details about the upcoming venture, but they may take inspiration from the Obamas, Bushes, and Clintons, who all have their own charitable foundations in the U.S.

Though they likely won’t make money from their charitable endeavors, the new venture will certainly help them carve out their new identities as they move away from the British monarchy.

Last year, Harry and Meghan walked away from the Royal Foundation, their formerly joint charity with the Duke and Duchess of Cambridge, to start their own charitable organization called Sussex Royal.

It’s unclear what will happen with the foundation now that they are no longer going to be working as senior royals and they have yet to clarify their plans for the organization.