British father-of-two, 36, dies during flight from New Zealand to UK

Tributes have been paid to a ‘beloved’ British dad-of-two who died on a flight to the UK from New Zealand aged just 36.

Chef Simon Gilby, originally from Exmouth, Devon, died after falling ill while on board Emirates flight EK413 from Christchurch to Dubai on Sunday.

He was travelling with wife Helen and children Chloe, four, and two-year-old Angus for a ‘long-awaited’ holiday to visit his family in England.

The aircraft was met by medical professionals when it landed in Dubai but they confirmed Simon had already passed away. His cause of death is still unknown.

Simon Gilby, 36, from Exmouth, Devon, died after falling ill while on a flight from Christchurch to Dubai on Sunday. he is pictured with his children, Chloe, four, and two-year-old Angus

The 36-year-old was a permanent resident of New Zealand, having emigrated to the country a number of years ago, and the family were based in Christchurch.

Simon’s wife Helen, a business owner and mum-of-two, said: ‘Simon was my soulmate and he was an amazing, devoted, loving father to our young children.

‘I am beyond grateful for the love and support we have been given.’

Helen’s mother has joined her in Dubai and the family plan to stay while their insurance is approved.

They then will continue to the UK for Simon’s funeral, accompanied by Helen’s mum and her partner, before Helen returns to her Christchurch home with her children.

A spokesman for the Gilby family said: ‘Simon was a much loved family man who was well respected by all who knew him.

‘We appreciate that people who care about the family have set up a fundraising page to help Simon’s wife Helen provide for their children’s future.

‘The family had appropriate insurances, which are currently working through the approval process. 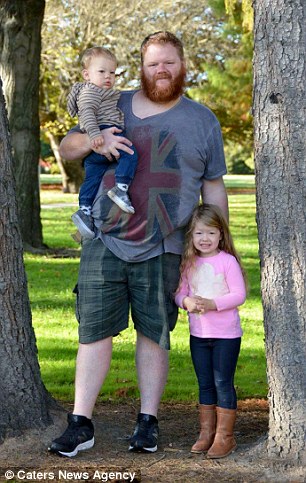 Simon Gilby with his two children Angus and Chloe

‘Helen has been blown away by the amount of support they have received from everyone during this devastating time.

‘She asks for privacy to work through this and support her precious children.’

Friend Sarah Bichan launched the fundraising page, which has already raised more than $4,000 NZD (£2,050) in donations.

Writing on the page, she said: ‘On 17th March 2018, Helen, her husband Simon, and their children Chloe and Angus, set off on a long-awaited trip to visit Simon’s family in the UK.

‘They were excited and happy, but sadly, they didn’t make it to the UK. On the way to their stopover in Dubai, Simon passed away.

‘Helen, Chloe and Angus are shocked and devastated and grieving.’

In a statement, an Emirates spokesman said: ‘Emirates can confirm that a passenger on flight EK413 Christchurch to Dubai on 18 March was taken ill on board.

‘On arrival in Dubai the flight was met by medical services who confirmed the passenger had sadly passed away.

‘Emirates offers sincere condolences to the family and is providing them with support and assistance.’