The money was handed over despite warnings that some of it would be wasted, stolen or even handed to terrorists. The Department for International Development insists it operates a ‘zero tolerance’ approach to corruption.

But critics warn it is wrong to increase aid to countries where there is a clear risk of it being diverted. The Government is committed to spending the equivalent of 0.7 per cent of UK income on foreign aid – £13.4billion last year. Tory MP Peter Bone said: ‘Whatever you think about the overall aid budget there is no point simply pouring in more money if it’s going to be stolen.

Al-Shibab extremists are pictured in Somalia. The UK’s aid to the most corrupt states on the planet has risen by 10 per cent

‘Why would you be giving more money to corrupt countries where there’s every chance it will end up in the Swiss bank accounts of dictators?

‘These are some of the worst regimes in the world and I think people will be shocked we are giving them so much money and even more shocked that it is still going up.

‘We should not be doing the 0.7 target – it encourages officials to just dole out money as fast as they can. My constituents want money spent on local problems.’

Transparency International, a respected think-tank, produces an annual list of the world’s most corrupt countries.

Analysis by the Daily Mail shows that Britain sends aid money to 18 of the worst 20.

Major beneficiaries this year include Somalia and Syria, where there are documented cases of Western aid money being appropriated by terrorist groups.

Earlier this month, the Government was forced to suspend a £12million aid scheme to Syria amid revelations that the cash was at risk of going to jihadi groups.

A BBC Panorama investigation found that the Syrian branch of Al Qaeda had handpicked police officers benefiting from the justice and community security scheme.

Aid money sent to Somalia is also at risk of being ‘taxed’ by terror groups such as Al Shabab. An internal Dfid ‘risk register’ concluded last year there was a ‘certain’ chance of funds being diverted by extremist groups. 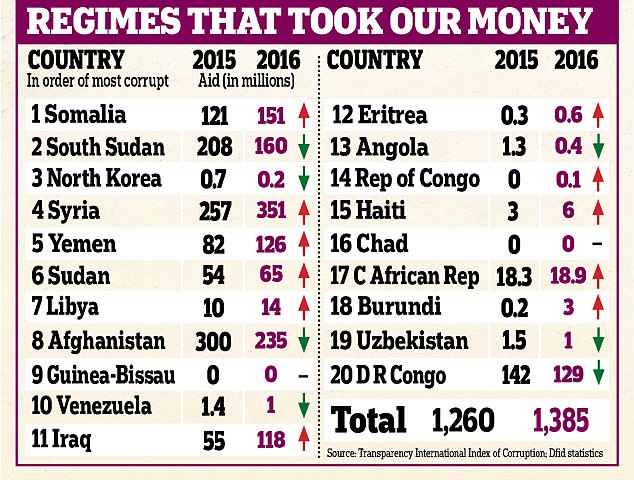 Pakistan, another country notorious for corruption, saw its funding rise by 23.6 per cent to £462.6million.

Overall, the aid budget rose by 11 per cent from 2015 to 2016, growing from £12.1billion to £13.4billion. That means the aid to corrupt countries increased in line with wider spending.

However, some countries saw much sharper rises. Aid to Somalia rose by £30million – or 25 per cent. Yemen, a country hit by war and famine, saw aid spending rise by 54 per cent – or £44million.

Aid to Syria, which has endured war and a refugee crisis, rose by 38 per cent, or more than £94million.

Large payments went to both Nigeria and Afghanistan despite them being identified by David Cameron last year as ‘possibly the two most corrupt countries in the world’.

There was a backlash against aid rules in September when it emerged that British Overseas Territories could not receive development cash despite being hit by hurricanes.

Anguilla, the British Virgin Islands and the Turks and Caicos islands were deemed too wealthy to qualify as aid recipients.

A Dfid spokesman stressed that officials did not give money directly to the worst regimes, instead dealing directly with groups operating in the countries.

‘Dfid does not provide financial aid directly to the governments of any of these countries,’ he added.

‘UK aid goes to trusted partners to save babies’ lives, prevent famine and get children into school, and Dfid has tough measures in place to protect taxpayers’ money.

‘By working in the most fragile and dangerous parts of the world, Dfid’s work makes us safer in the UK by tackling problems at source which would otherwise arrive on our doorstep.’