British graduates, 24, spend £5,300 on minibus and take it all around Europe

A British couple who decided to spend £5,300 on a minibus and live in it because rent prices in the UK ‘are too expensive’ have claimed they are able to get by on just £100-a-week.

Aaron Gold and Laura King met in 2015 while studying at the University of Westminster in London and lived together for 18 months during their time at the institution.

The pair, both 24, moved back home after graduating, with mental health worker Laura going back to Leeds and musician Aaron going home to live with his parents in London.

Being more than 200 miles apart, the couple were restricted to video calls and fortnightly trips on the Megabus to see each other.

After two and a half years of going back and forth they wanted more than anything to be together full time. With sky high rent prices in the UK, moving into an apartment together was out of the question for them.

The two love birds worked on a solution and eventually they came to an idea that could work; an idea that would allow them to explore their likes of art and travel.

They decided to move into a Renault Master 2009 minibus which they bought for just £4,000 from Facebook Market Place in January 2019. 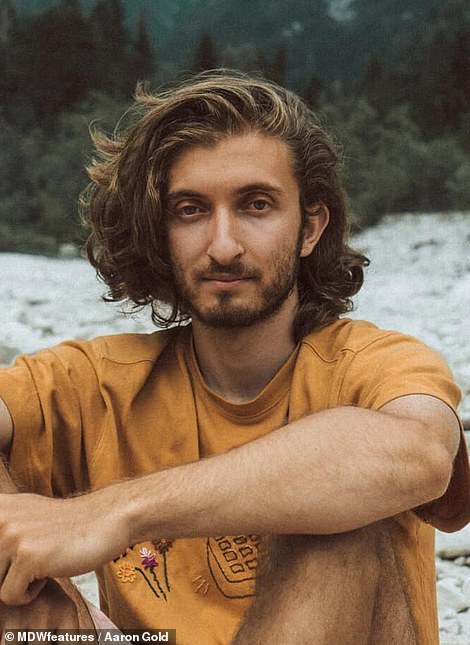 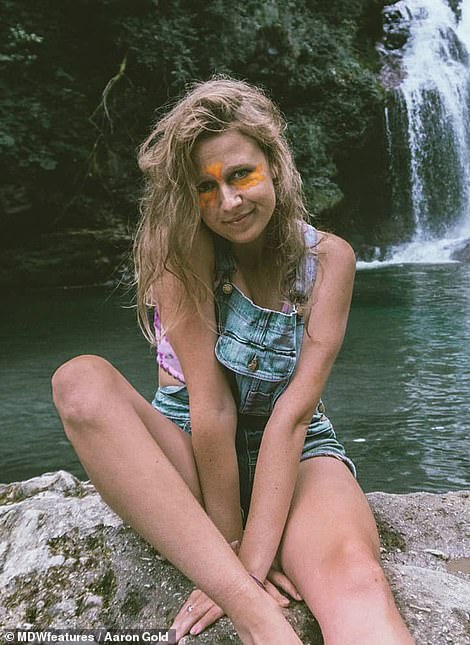 The couple, Aaron, left and Laura, right, had gotten sick of spending so much time apart and wanted to live together 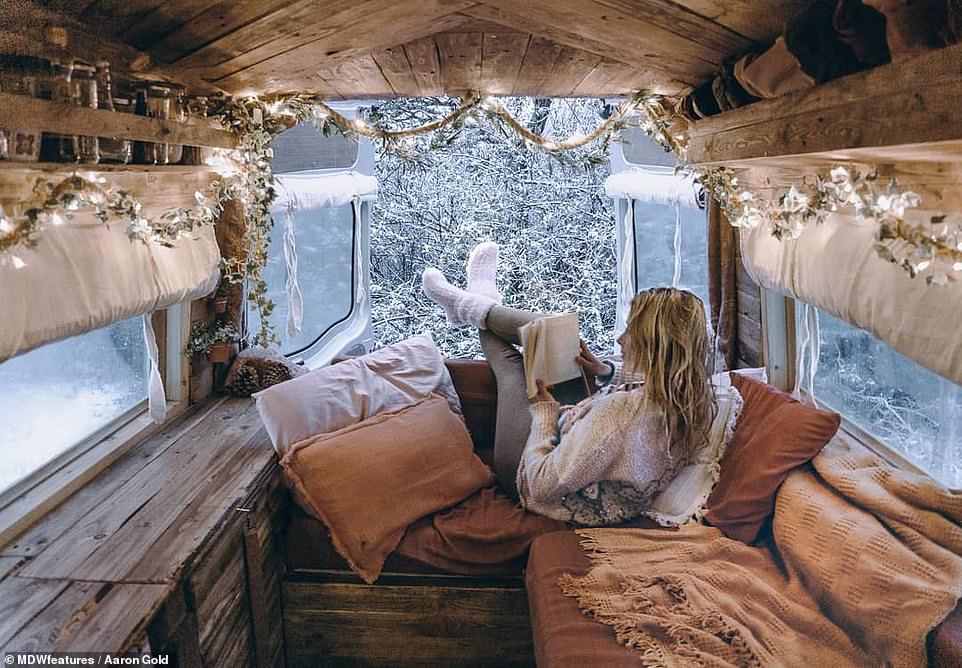 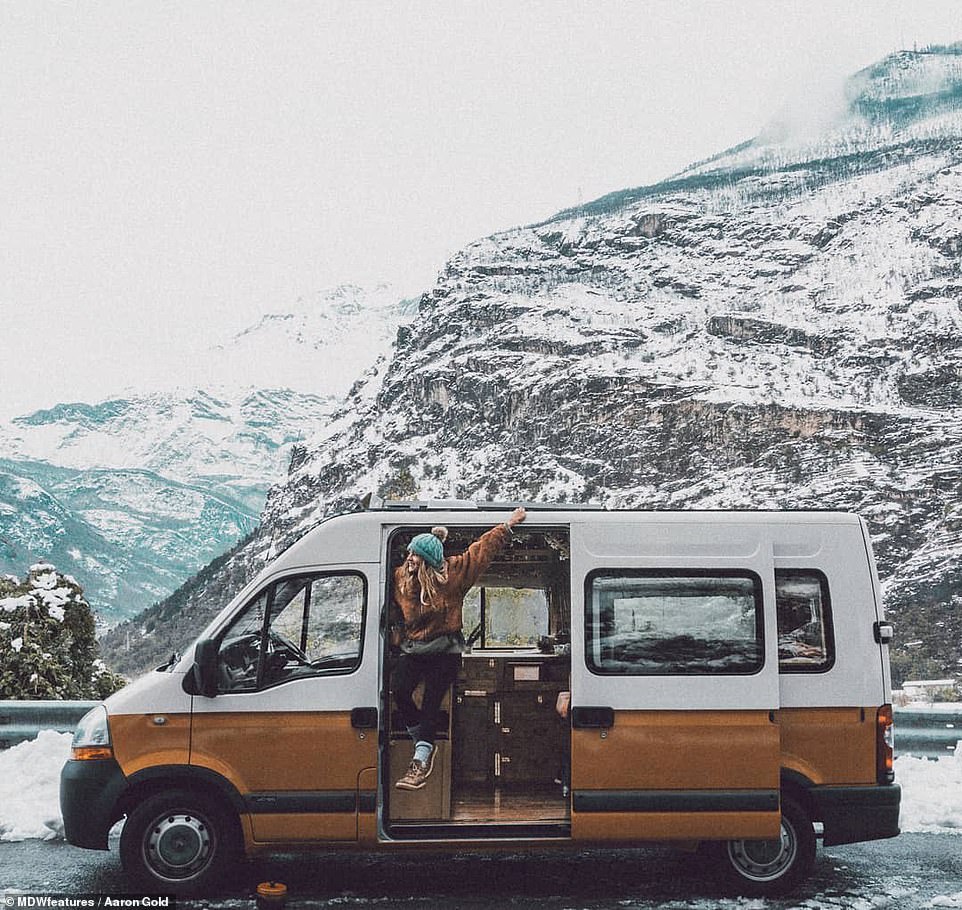 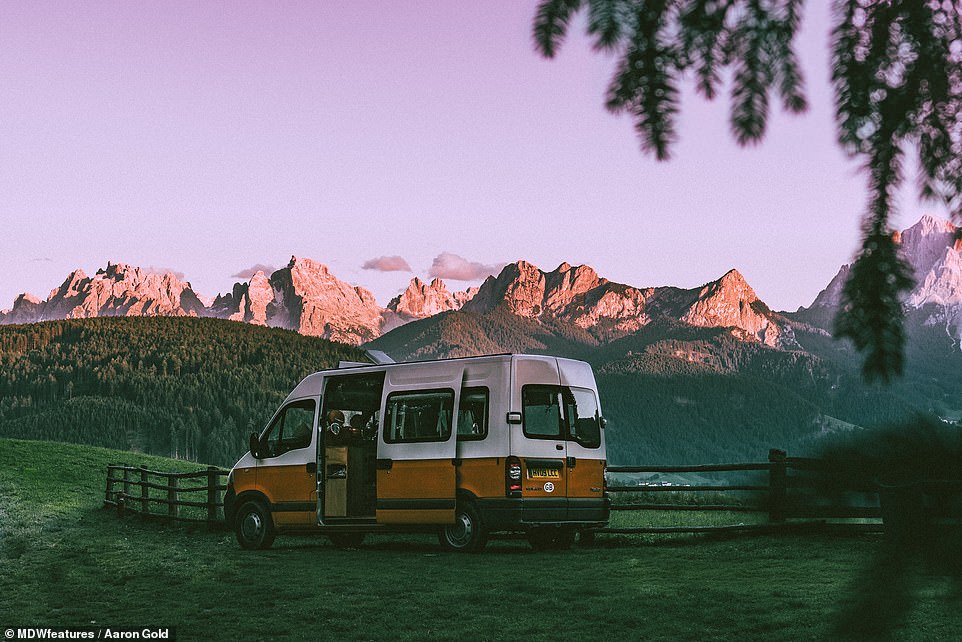 The pair have covered 7,500 miles across Europe in their van and have stopped in places such as Italy and Croatia, taking photos as they go

‘Me and Laura met at the University of Westminster five years ago. I was a music student and Laura studied fashion. I saw her walking through university with bright blue hair and wacky clothes and I knew I wanted to get to know her,’ Aaron said.

‘It turned out my flatmate was on the same course as her so she subtly helped set us up. From that day on our relationship grew and we lived together for the last eighteen months of study.

‘But after university we had to go back to our parents’ houses, mine in London and Laura’s in Leeds. No one really likes moving back home after having that freedom and feeling like an adult and it was especially difficult being apart from the person I love.’

Aaron said the pair had grown a lot together during university and that it had been hard for them to be so far apart.

‘After two and a half years at our parents, we were obviously really desperate to live together. With the cost of rent being what it is these days a flat was totally out of the question.

‘Both of us have a passion for the arts and for travel, we figured the best way for us to live together at present was to buy a van and travel in it together. A van specifically allows us to call anywhere home, from on top of a mountain to the side of a beach. 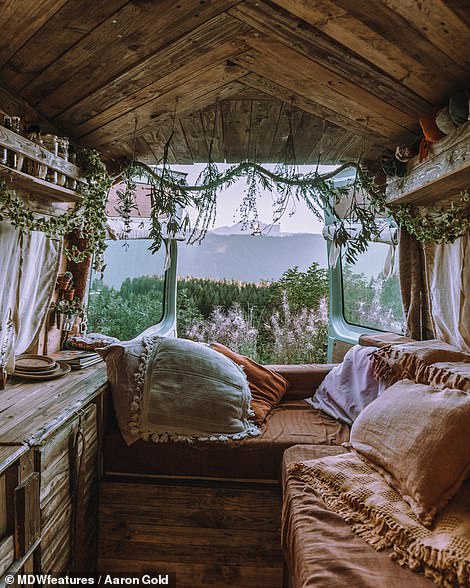 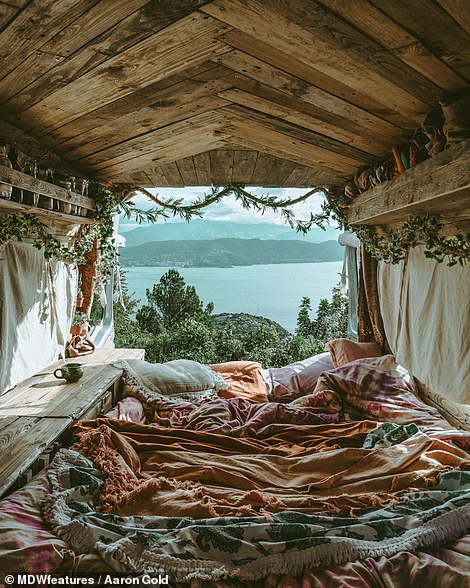 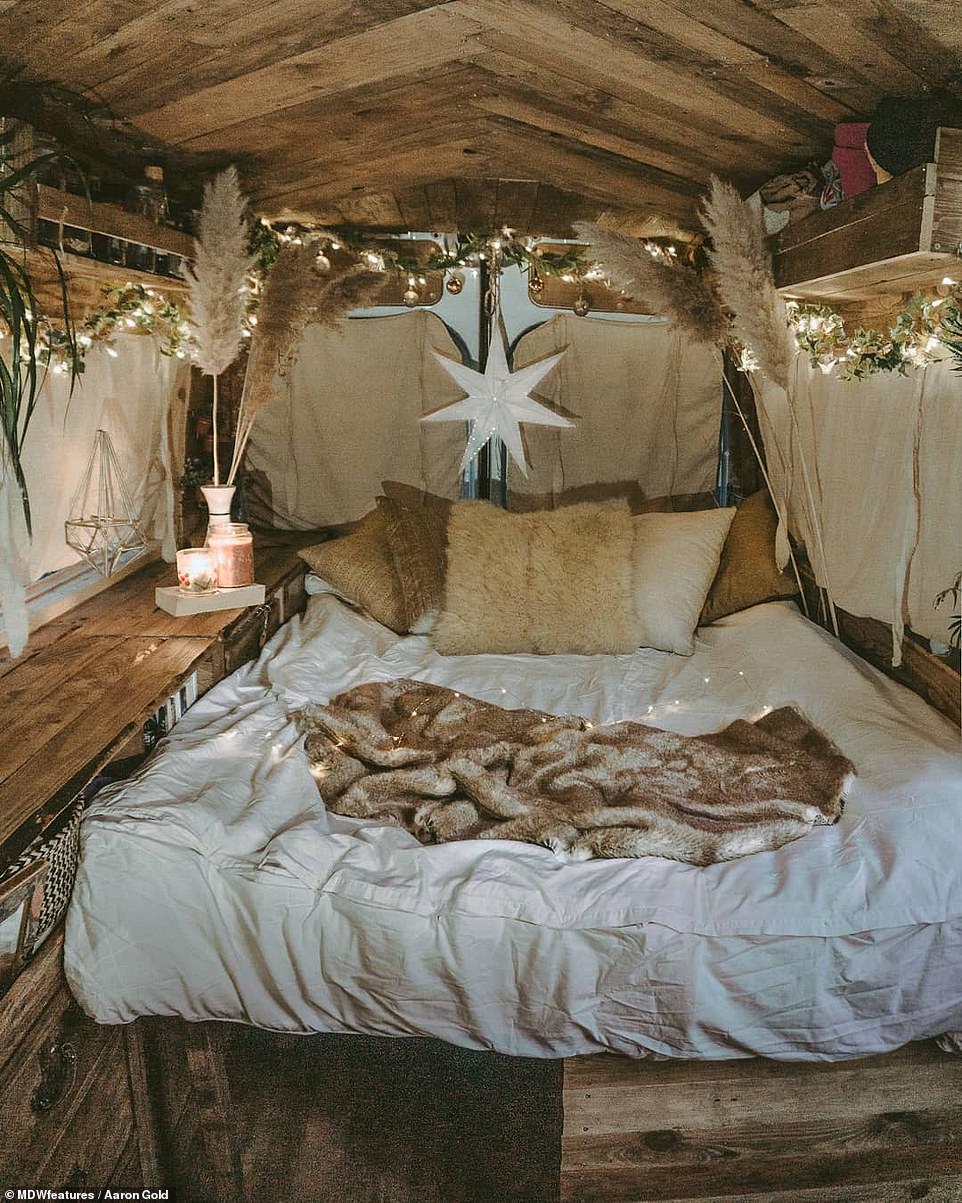 They renovated the van by using second hand materials and buying things from online market places such as eBay. They also had help from their families 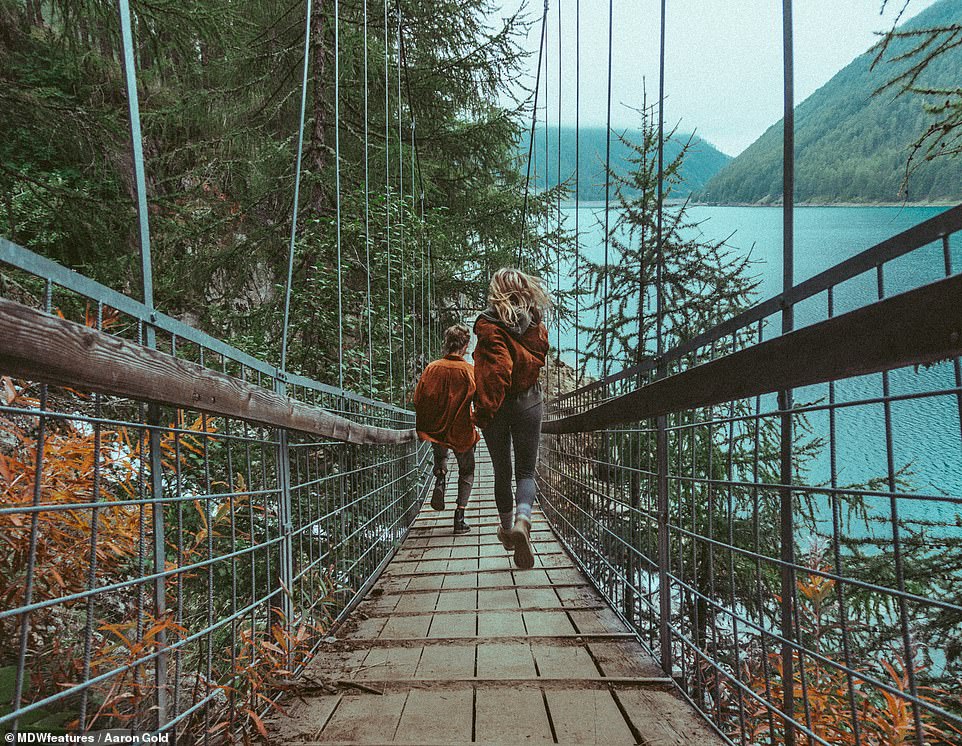 The duo have travelled to Tuscany, Italy, Germany, Austria, Sardinia, Slovenia and Croatia. The pair have spoken openly about their struggles on their website 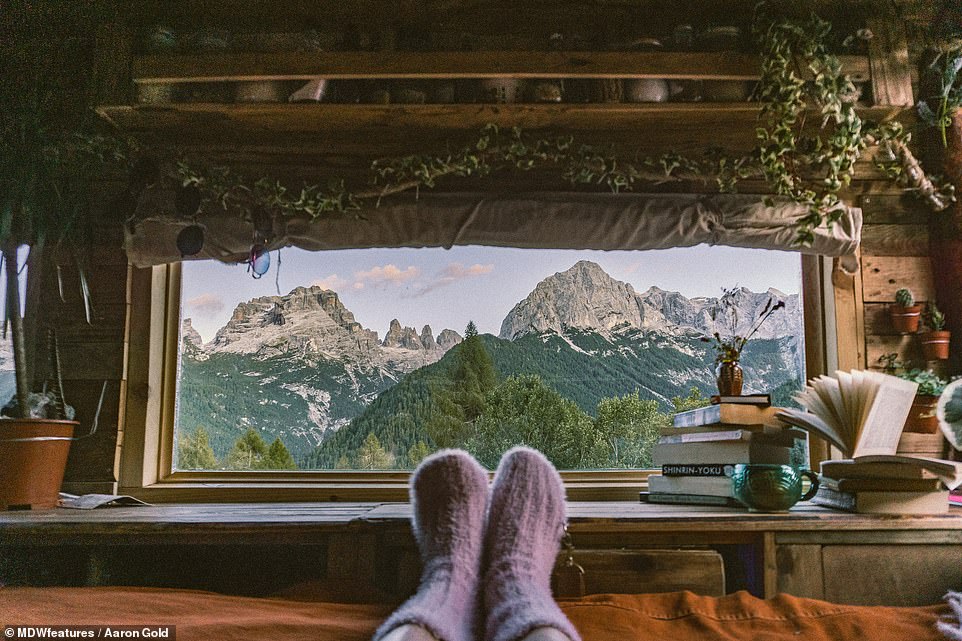 A room with a view! The couple have said they both struggle with anxiety and have never had any problems with security while being on the van

‘After a year of saving from our jobs we bought a Renault Master 2009 with thirty-thousand miles on her for £4,000 from Facebook Market Place.’

They moved on board in June 2019 and have already covered 7,500 miles across Europe and their total living expenses are just £100 per week.

Although they have really enjoyed their time on the road it hasn’t all been plane sailing as they weren’t very welcome in Croatia and had to have regular time out to deal with the challenges of always living in close proximity to each other.

After some initial doubts, their family have been very supportive and they now enjoy watching their journey unfold.

The couple agree that it has been a relief to be able to finally be together again. 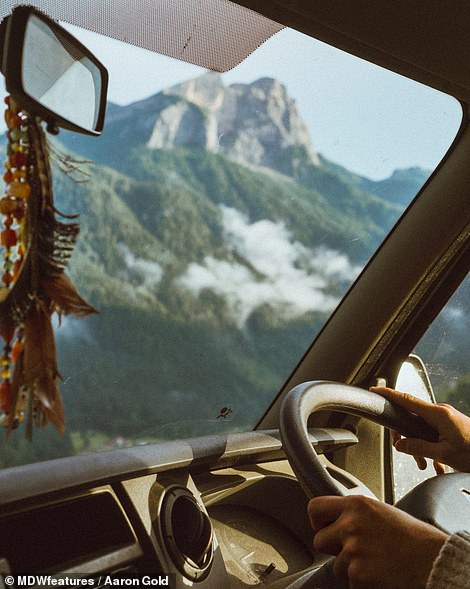 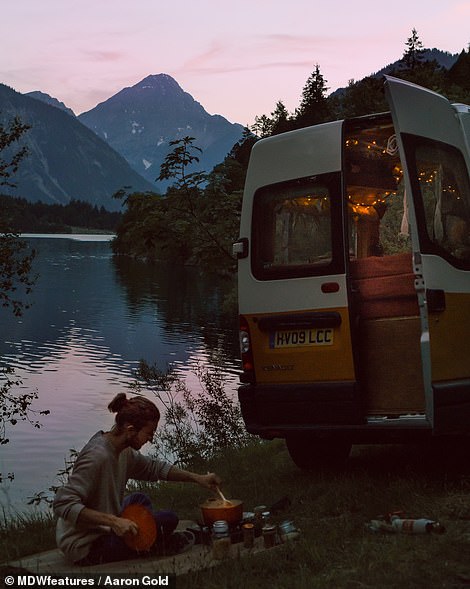 The couple say their living costs are just £100-a-week. They claim that this includes fuel costs to power the van (left) as well as their food (cooking right) 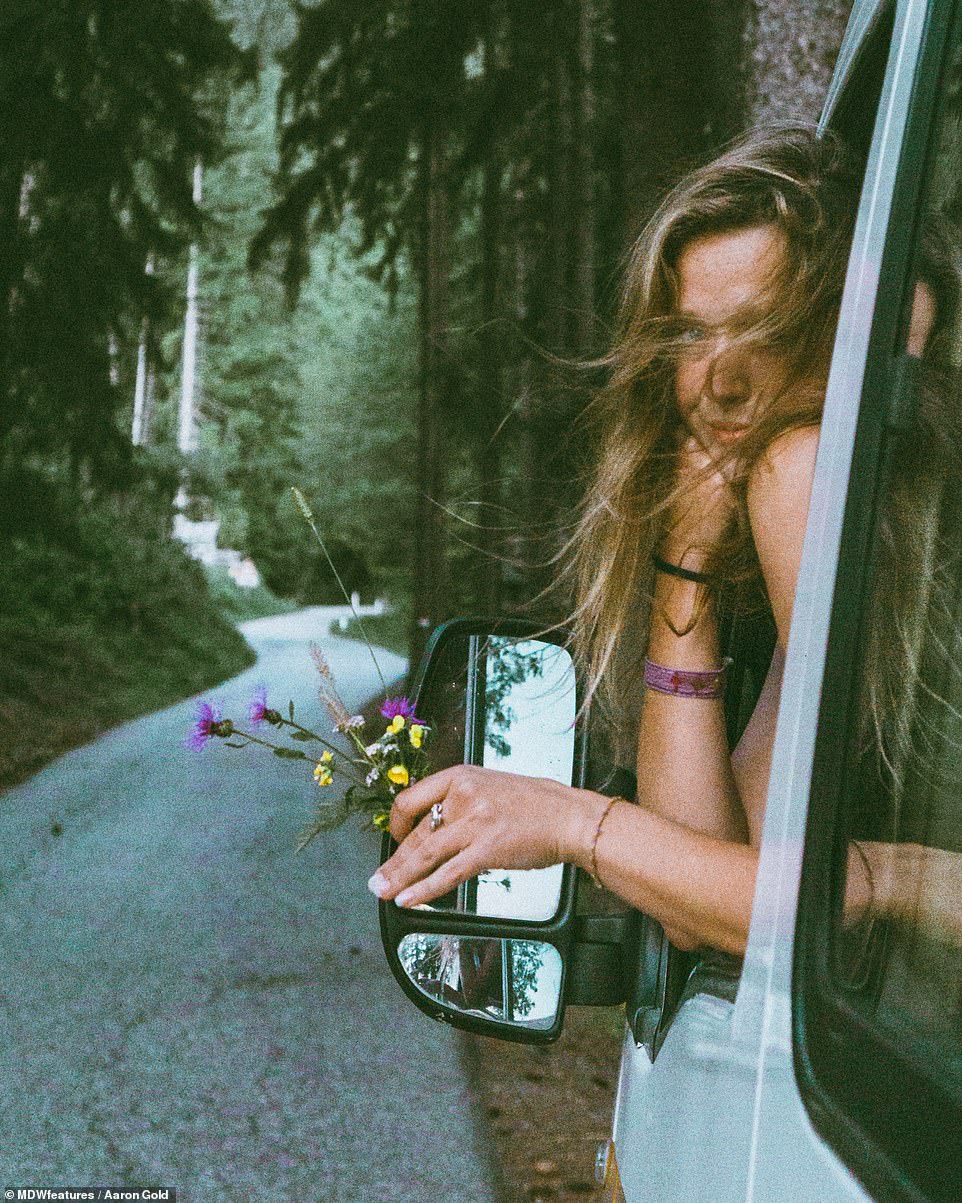 Free spirits: The couple said living in an apartment was out of the question for them so they now live together in a van 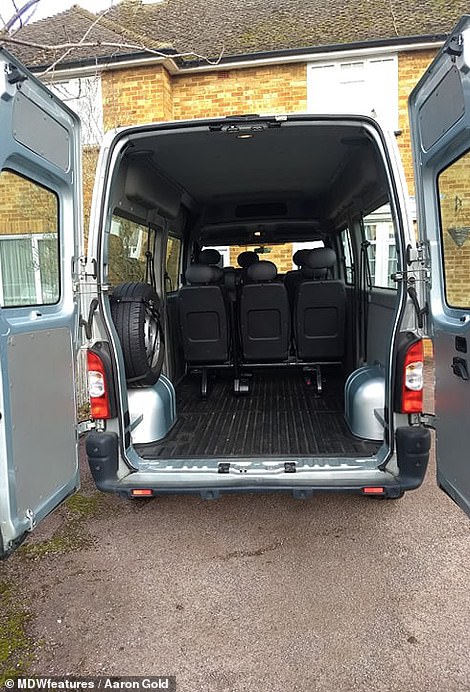 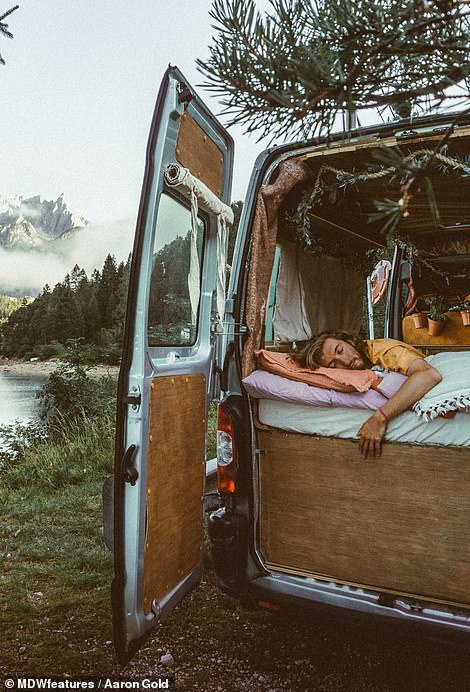 Before and after: The van is pictured left when the couple first purchases it. Aaron is pictured in the van right, having a nap

‘We spent just £1,300 on renovations. This would normally cost a lot more but we mainly upcycled materials and this saved us a lot of money. We did most of the renovation work in Laura’s house, which her parents weren’t too pleased about at the time.

‘By June 2019, we were ready and off on our first adventure – and what an adventure it’s been. We have travelled to the north of Italy through Germany and Austria. We spent most of our time in the Dolomites which is a breath-taking Italian mountain range.

‘We also explored Tuscany and the east side of Sardinia. We spent some more time in Slovenia and Croatia, although they weren’t very camper-friendly there and the police didn’t like us being there. We were lucky not to get any fines.’

‘This lifestyle is incredibly cheap we spend just £100 a week and that covers our fuel, food, washing and any other random things. You’d be lucky if £100 a week even got you a flat in the UK.’ 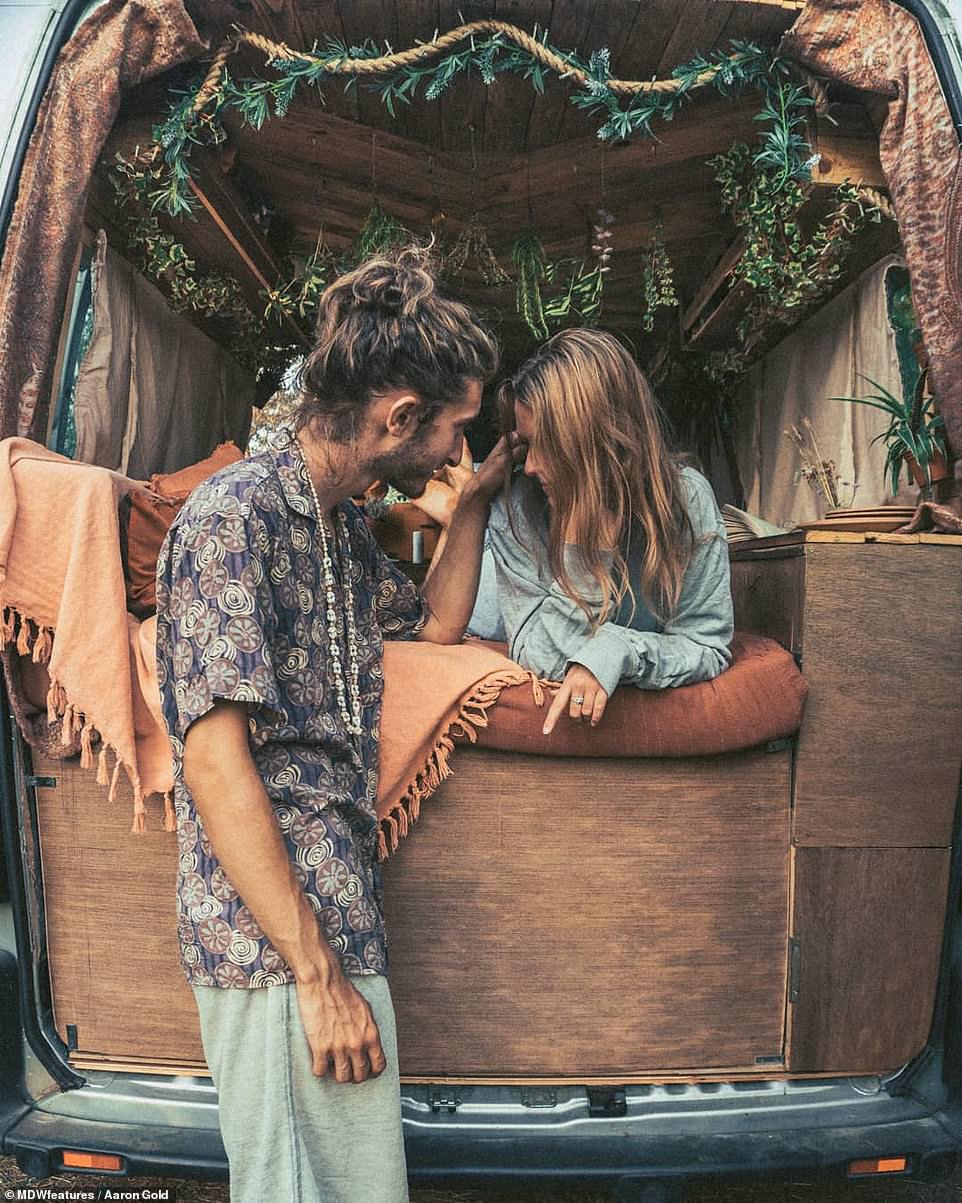 Love birds:  One of the couple’s most recent destinations includes Lago Di Braies. They say they are focused on making the most of their travels 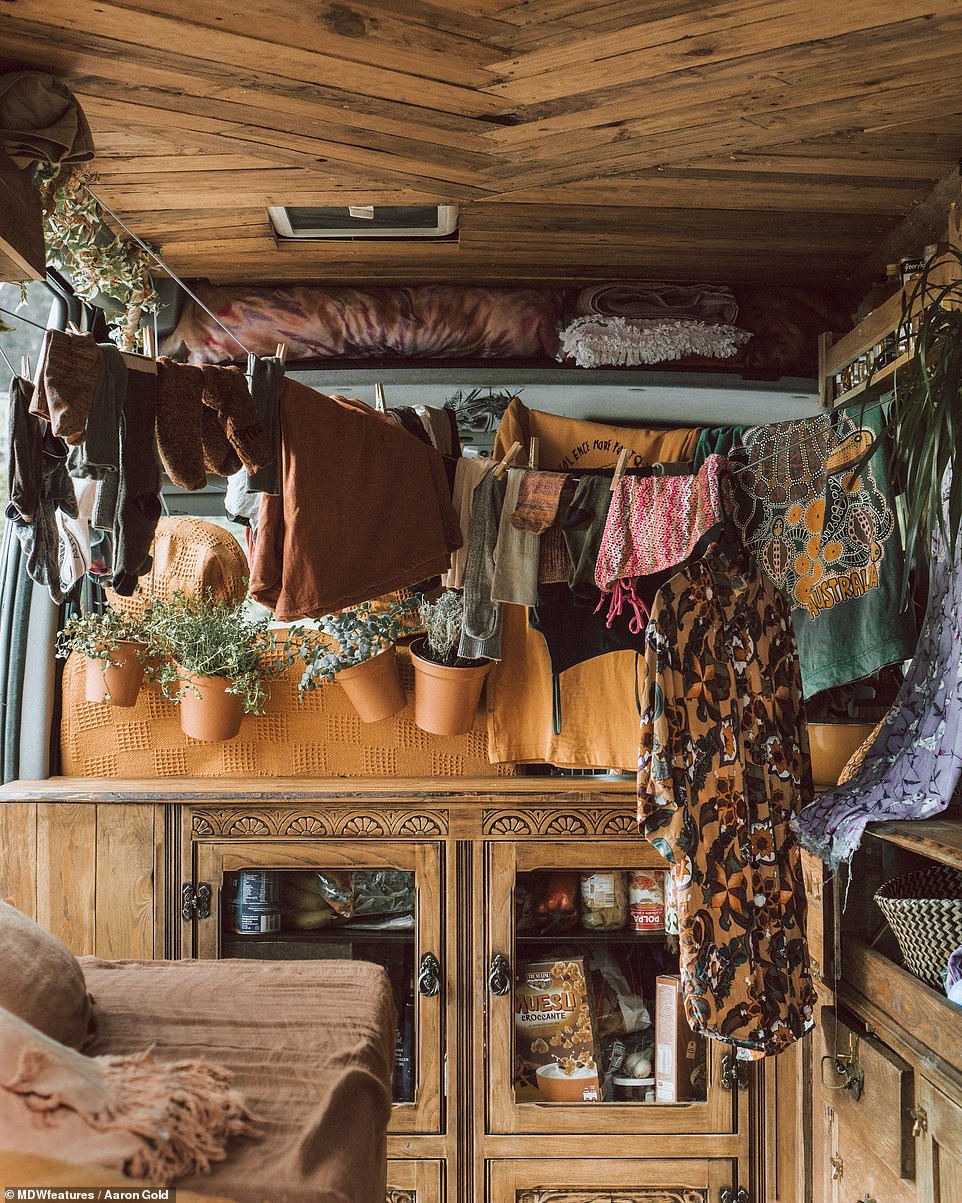 Homely! The inside of the van has been made super cosy by the couple who hand potted plants around and have all their food in the cupboards 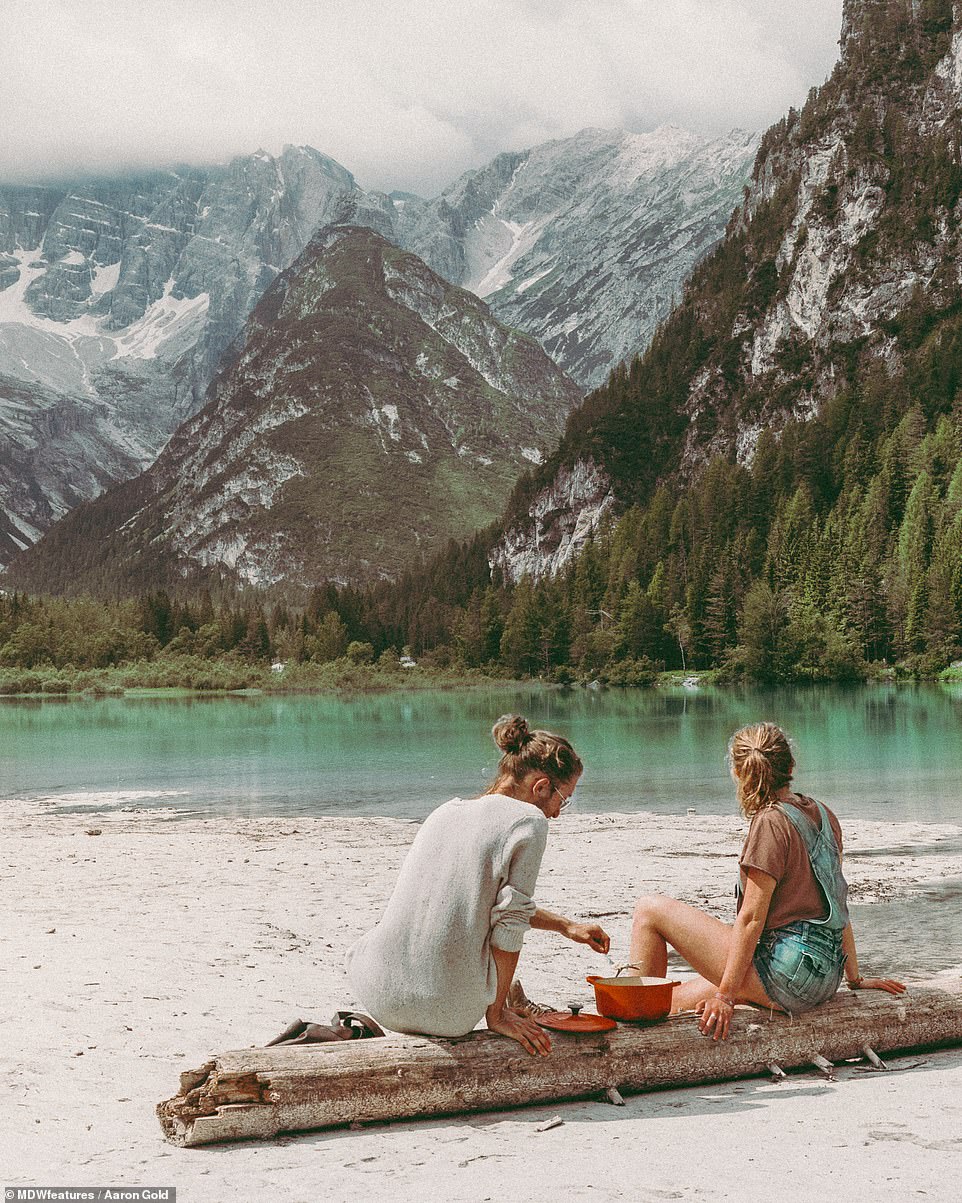 The couple said they often don’t use dishes in order to avoid having to wash up. They are pictured above eating out of a pan

The couple are around each other all of the time and said they have to make a real effort to have time to themselves. They said being together all of the time has caused friction, but because they spent most of their hours outdoors, that it isn’t too much of a problem.

Aaron said their families had been sceptical about their plans, but once they saw the two of them in action, they came round to the idea of their children living on the road.

‘They could see all the places we’ve been to and that eased their doubts. They’ve all been curious and keen to learn about our journey which is always good to hear.

‘Three misconceptions about van life. Number one: van life is not very difficult; we converted the entire van with no previous experience. Number two: van life is safe as we both struggle with anxiety and have never had any problems with security. Number three: van life doesn’t have to be gross, you can always find showers at gyms, public pools or even on the road.

‘I can’t tell you what a relief it is to be back together again. We weren’t just back living together though, we were having so much fun, enjoying the freedom we had together.’