A British hate preacher, who told children that martyrdom was better than school, has been jailed for six-and-a-half years for supporting the Islamic State terror group.

Kamran Sabir Hussain, 40, from Stoke-on-Trent, delivered his lectures from a lectern in front of a black ISIS flag, to a congregation that included children as young as three.

He was secretly recorded by an undercover officer making a series of radical sermons over four months last year.

After he was arrested, the defendant argued the ability to discuss ‘difficult concepts in a challenging world’ was an essential part of religion and claimed he was exercising his right to freedom of speech.

But following a trial at the Old Bailey, Hussain was found guilty of two charges of supporting IS and six of encouraging terrorism on dates between June and September last year.

Sentencing his him to six-and-a-half years in prison, Judge Rebecca Poulet QC said he had preached ‘hatred and division’.

His encouragement of terrorism and support for IS was ‘calculated and intentional’ at a time of ‘terrible terrorist incidents’, she said.

Judge Poulet said: ‘In my judgment these sermons represented serious and persistent although frequently indirect encouragement to acts of terrorism.’

The jury was not aware that the mosque was visited by Mohibur Rahman, who was convicted of plotting a pipe bomb and machete attack earlier this year.

The content of the speeches was revealed by an undercover officer who was sent into the mosque to record the imam in the first such case to come before the courts.

Hussain stirred up his congregation by telling them that the right-wing English Defence League and Britain First were funded by the government to attack Muslims.

‘The kuffar will attack you and kill you,’ he told them. ‘Stand up and be ready to sacrifice, be ready to stand in the face of the elements of shaytan [satan], be ready to spill blood and have your blood spilt.’

Hussain ran the Faizal Ellahi mosque, which was registered as a charity, behind a former shop front on the High Street in Tunstall, Stoke-on-Trent.

He lived in a flat close to the mosque where police found an upstairs fitness room with an ‘inspirational’ poster on the wall showing an assault rifle and a hunting knife.

Hussain took over the mosque when the previous imam retired, delivering the Friday sermon and offering advice to married couples and families.

The officer used the name ‘Qassim’ and began attending the mosque in June last year, recording sermons given by Hussain over a period of four months.

In March 2016, Hussain posted a message on social media in which he said that the ‘Khilafah’ – a reference to ISIS – was ‘knocking on your door and the fulfillment of Allah’s command is near and if you don’t like it and are enraged by it, then our message to you is simple: ‘Die in your rage.”

On June 24, nine days after the start of Ramadan, Hussain delivered a 23-minute sermon in front of around 10 people in which he spoke of a ‘small fledgling state who is standing in the face of a pompous and arrogant army’ – said to be a reference to ISIS – and asked his audience to pray for them to be victorious and for their oppressors to be annihilated. 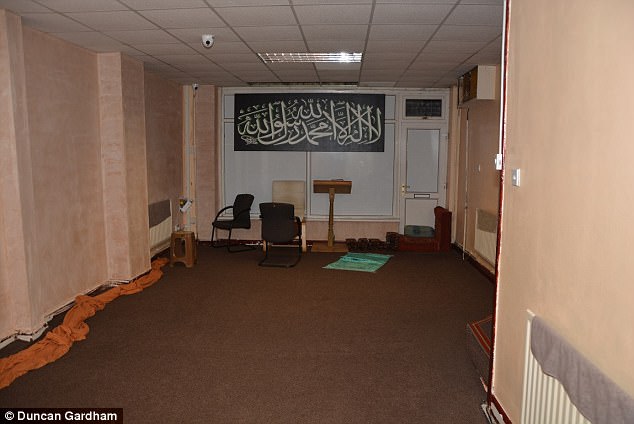 Kamran Sabir Hussain, 40, from Stoke-on-Trent, delivered his lecturers from a lectern in front of a black ISIS flag, to a congregation that included children as young as three

In a 30-minute sermon on July 22, Hussain asked his congregation to pray that they might all live under shariah law and to stand firm against sinners, adding: ‘Finish them and remove their heads for what they do…when you don’t fulfill the command of Allah, I’m coming to remove your head.’

He took the topic of the ‘mujahideen’ [holy warriors] as his topic on August 5, telling the congregation that they ‘take over a land, they stand a black flag, and establish the law of Allah over the necks of the people, whether they like it or don’t like it’ and ‘nobody, not the Queen, not the Prime Minister, can say that you are not allowed to establish the law of Allah.’

The sermon echoed a recording Hussain had apparently made at a demonstration saying: ‘Inshallah, we will see the black flag of Islam over Big Ben and Downing Street’

The speech was accompanied by chants of ‘Allahu Akbar!’ and ‘Takbir!’ [god is great].

In front of a congregation of 10 to 15 children under the age of 15, and about 25 adults, Hussain told them on August 19 last year that the British government funded groups like the English Defence League (EDL) and Britain First to insult Muslims, attack them and put them down.

On September 2 last year, Hussain told nine children – two of them under five – and 35 adults that martyrdom was the ‘supreme success’ and greater than any other success such as school or college. 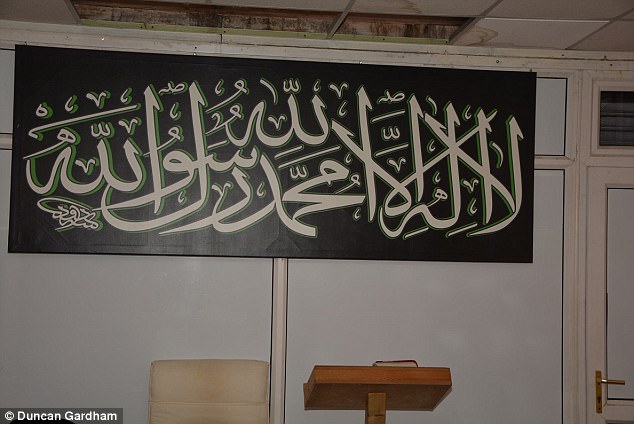 In a 30-minute sermon on July 22, Hussain asked his congregation to pray that they might all live under shariah law and to stand firm against sinners

But he added: ‘If indeed you are adventurous, you are ambitious, you’re ready to take on the challenge, then Allah gives you the actions you need to take – the ones who died fighting for the sake of Allah.

‘Allah’s saying they are the ones who have supreme success, those who fought in the cause of Allah.’

Those who died fighting for Allah had nothing to fear when ‘you go in front of Allah with the bullet wounds and the sword wounds and you are raised in that situation with the blood still coming from your body.’

Hussain finished the sermon with a prayer that the ‘thorn placed by the martyrs in the neck of the unbelievers may be deepened.’ 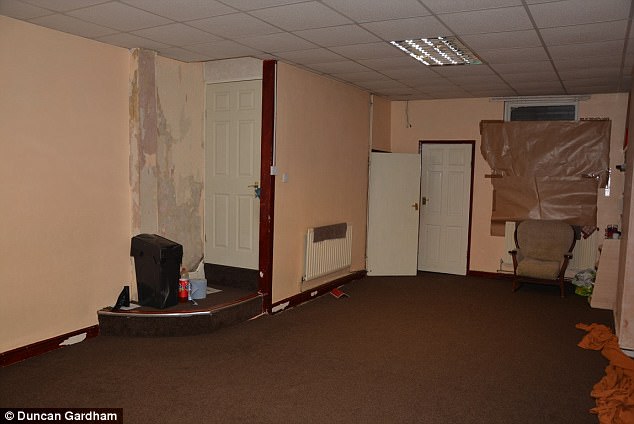 He returned to his theme of the glories of martyrdom in a sermon on September 16, before going on to criticise the Prevent programme, which seeks to identify people at risk of radicalisation.

He then spoke of the coming of the ‘Caliphate on the Path of Prophecy’ – a description of ISIS – saying that the caliphate would make no deals or negotiate with ‘kuffar organisations’ but would call for the dominance of Allah across the world.

The caliphate would be attacked and oppressed and attacked by drones but would gain more and more territory, he added.

When he was arrested on February 14 this year, he refused to answer questions but gave police a written statement saying the ability to discuss ‘difficult concepts in a challenging world’ was an essential part of the exercise of religion and freedom of speech.

In court he claimed he was only trying to ’emulate the Prophet’ with his ‘urgent’ delivery and was surprised to hear the tone of his sermons.

‘I did not imagine it to be like that,’ he said. ‘I thought it would be quite bland.’

Mari Reid from the Crown Prosecution Service (CPS) said: ‘Kamran Hussain was in a position of trust and authority which he abused by encouraging support for Daesh and glorifying violent extremism.

‘His audience included children who would have heard him say killing others or being killed themselves was more desirable than doing well in school.

‘The CPS was able to take the jury through his dangerous sermons and show how they went beyond ordinary speech and amounted to support for terrorism.’