A British Instagram influencer spent 24 hours locked in a stinking, cockroach-infested police cell in Bangkok where she was treated ‘like an animal’ by Thai police who found two pages of her passport were missing.

Lacey Montgomery-Henderson, 28, from Glasgow, was refused entry to the country after airport officials rejected the document, which she amended following a liquid spill years before.

Instead of her intended luxury work trip alongside other bloggers and models, Lacey was locked up in a Bangkok police cell where authorities ‘treat you like animals’.

The tiny stinking cell was overrun with cockroaches, she said, and housed six bunk beds.

She was thrown in with other women who had also been detained – one of whom was ‘in hysterics’ having been behind bars for two days.

Lacey said online: ‘I feel responsible to make sure no one else ends up in a situation like that.

‘I wouldn’t wish it on anyone, they treat you like animals and it’s an experience I won’t forget quickly.’

Lacey, who has 300,000 Instagram followers, said online the prison cell ‘stank’ and was covered in cockroaches.

Then Lacey was taken up in a lift, escorted by more officials who said her passport was unacceptable to the authorities, and one woman who repeatedly told her to ‘shut up and sit back down’.

The model, who turns 28 today, had left Scotland on Sunday for a flight to Heathrow and then flown on to Bangkok in Thailand, where she intended to spend 10 days working with other bloggers and models.

But instead she spent 24 hours in a Bangkok prison cell.

MailOnline understands her detention was because she had two blank pages missing from the centre of her passport due to a water spillage five years ago, after which she removed the stained paper.

But she has travelled the world without issue on the document, including to Spain and the USA.

A source said: Lacey was treated like a prisoner in a locked room with cockroaches, she was humbled by the 1000’s of messages mostly from strangers and has been non stop replying to keep her going.’ 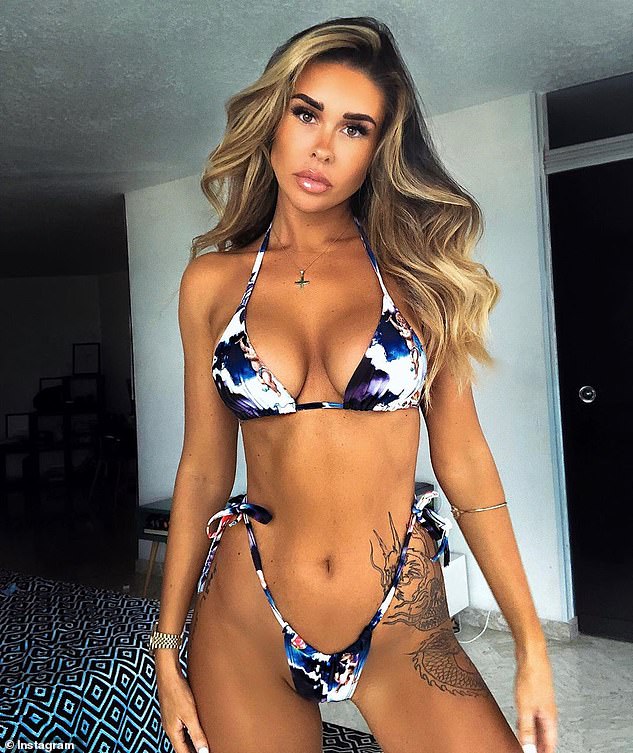 Lacey, who has 300,000-followers on Instagram, said her fans had kept her smiling in her cell 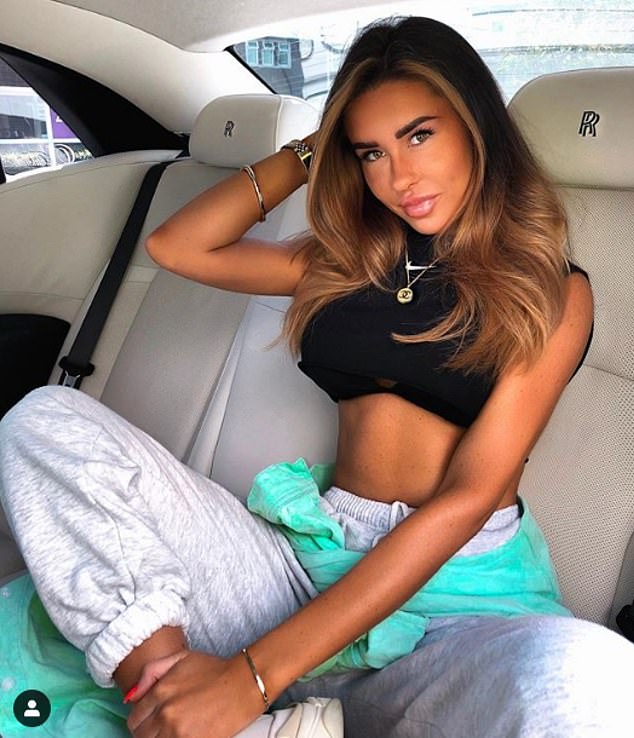 Once released at 10pm GMT last night, the beauty blogger was escorted by British Airways staff onto a BA flight which, she said online, ‘restored her faith in humanity.’

This morning she posted on Instagram a video of her family meeting her at Heathrow with huge helium balloons to celebrate her safe return.

Lacey was allowed to keep her phone during the time in the cell and added that she kept her sanity by messaging people who connected with her through the app.

‘Honestly just chatting to all of you for 24 hours in that cell was the only thing keeping a smile on my face,’ she said.

’90 per cent of you are complete strangers and to care so much about someone’s welfare you don’t know has honestly meant more than you’ll know.’ 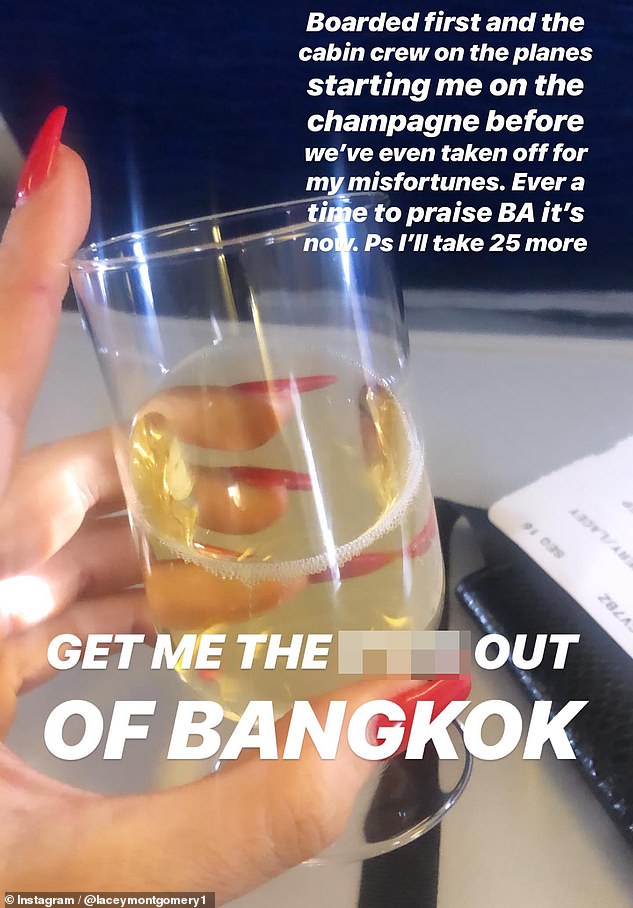 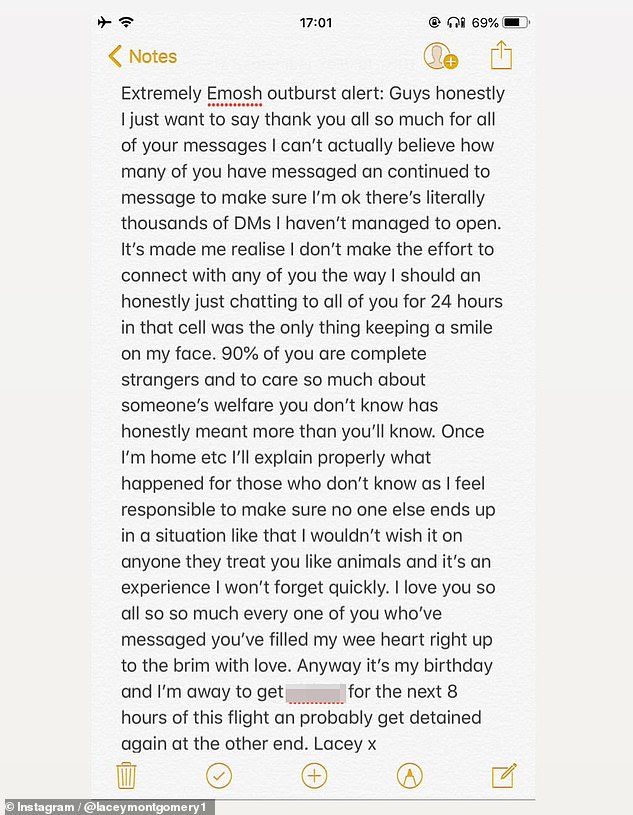 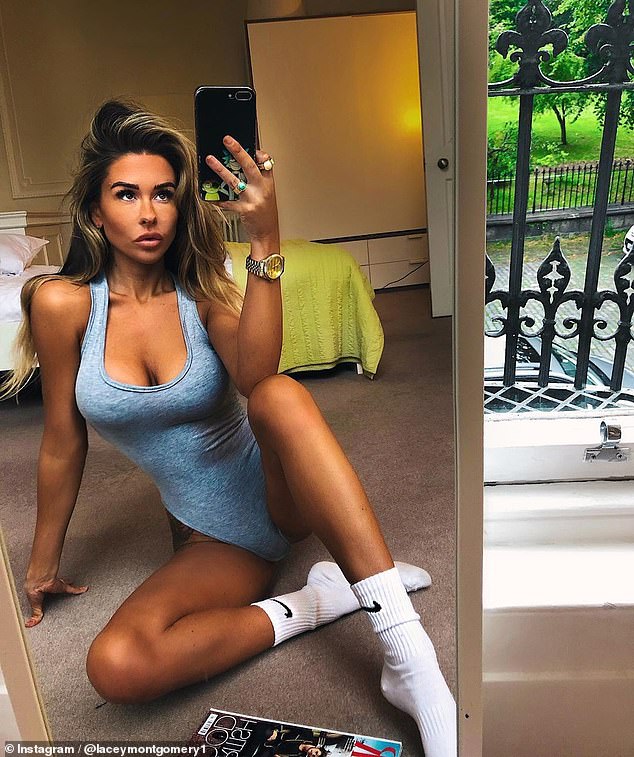 Once released at 10pm GMT last night, the beauty blogger was escorted by British Airways staff onto a BA flight which, she said, ‘restored her faith in humanity.’ 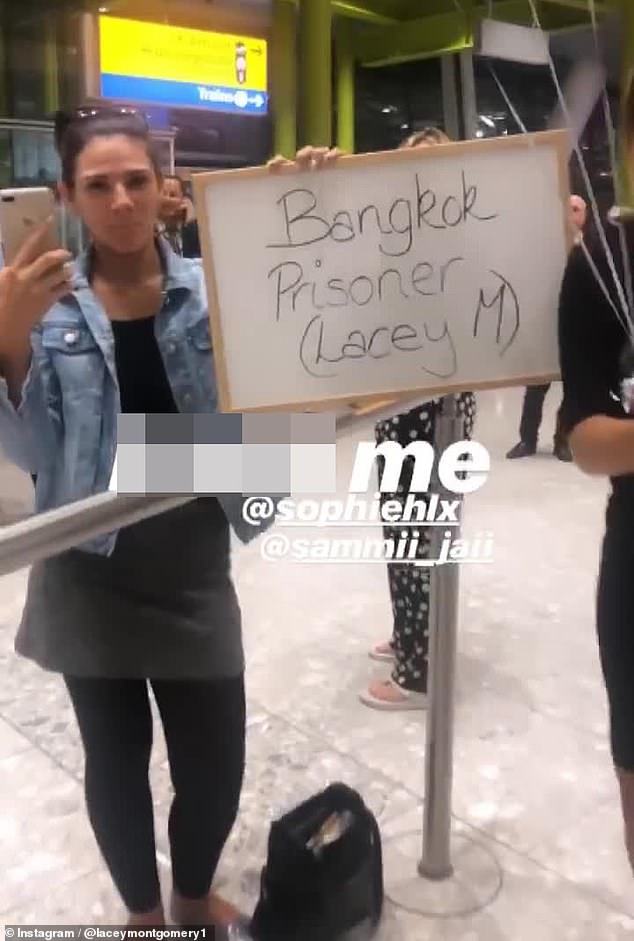 Online Lacey praised BA staff who had gone ‘over and above’ to look after her, following her ordeal.

Yesterday was 28th birthday and Lacey will be travelling with family to Windsor for a much-needed few days rest and recuperation with family.

She has reportedly been offered her another trip, this time to the USA in October, to work with other bloggers in Los Angeles.