British Jordana Grace made a life-threatening error in Australia ‘such a BRITISH mistake!’

A young woman has been left red faced after making a ‘very British mistake’ which could have landed her in a life-threatening situation.

British expat, Jordana Grace, issued an urgent warning to her 235k TikTok followers where she admitted she had ‘walked straight into a rip’ during a visit to the beach.

Instead of choosing to swim between the flags the young woman chose a spot without waves thinking it looked much easier to navigate.

She added that she couldn’t see very well as she wasn’t wearing her glasses in the water and when she managed to focus she realised she had drifted a long way from her belongings.

‘I should have known better, I have been here a while now,’ she said. 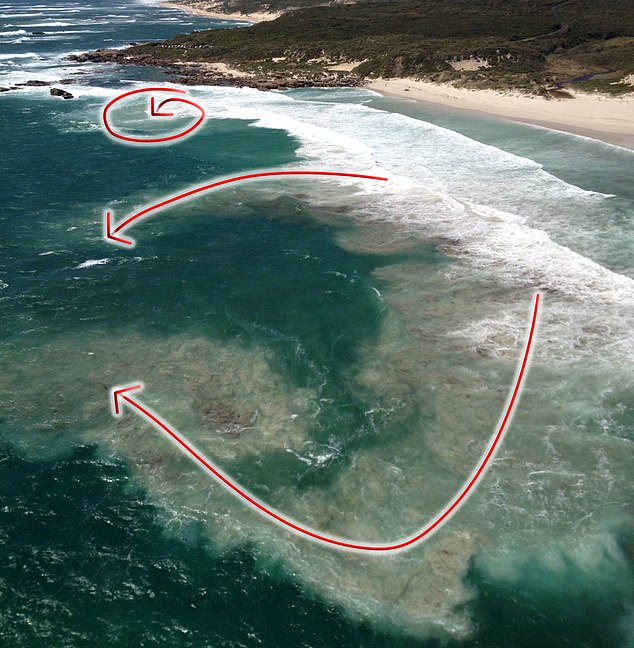 From the sand, a rip will not have as many incoming breaking waves because the water is going out towards the ocean, not breaking onto the shore 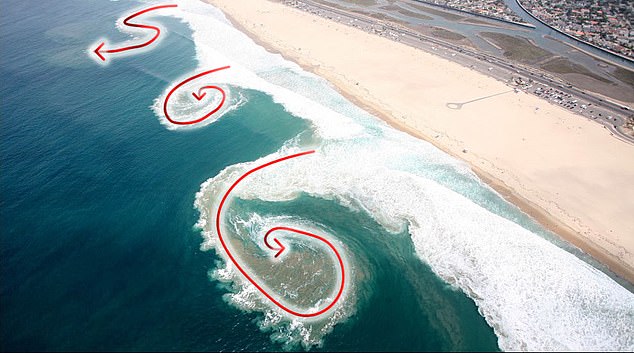 Viewed from above, you can see sand from the shallows being taken out with the current as it pushes water back to the deeper ocean water

Before urging all ‘British people’ to swim between the flags.

She also pointed out exactly how to tell where a rip may be when taking a dip.

‘A rip is like, you know when you are looking at the waves crashing? Where is it white is where it is safe,’ she said.

He also said the safest option is to always swim between the flags, and never swim at night.

The club captain spoke out after a horror Australia Day morning where he had to rescue eight swimmers before 11am.

Then, at 11.20 overwhelmed lifeguards called him for help to rescue an entire family of adults who had found themselves struggling in a rip.

One of the struggling family members was saved by CPR after going into ‘secondary drowning’, meaning water had gotten into their lungs and they could have died.

HOW TO ESCAPE A RIP

‘The biggest way people can identify where there is a rip or not is listen to surf lifesaver and surf life rescuers advice. Swim between the flags.’

A rip might have deeper and darker water with fewer breaking waves, there may be seaweed or debris floating out to sea or sandy-coloured water that extends beyond the surf zone, he said.

Mr Burgess said if you are caught in a rip ‘don’t panic’ and swim parallel to the shoreline.

‘The rip’s gonna take you out [into the ocean] past the break,’ he said.

‘But instead of swimming against it, tiring yourself out, if you actually stay calm and relaxed and then swim along the coastline… you’ll actually be able to swim yourself out of the rip.’