Life expectancy in Britain for both men and women has fallen by six months compared to last year, figures have revealed.

Statistics from the Institute of Faculty of Actuaries, which calculates life expectancy for pension providers, expects men to live until 86.9 years and women to 89.2 years.

The data, produced annually and widely used to price products linked to life expectancy – like annuities, life cover and pension schemes – and could be a boost to insurers.

The institute declined to speculate on exactly why the forecasts showed lower life expectancy, but experts have pointed to the impact of austerity, cuts to the NHS, and rising rates of dementia, diabetes and obesity.

Tim Gordon, chair of the Mortality Projections Committee for the Continuous Mortality Investigation, a firm owned by the institute and which carried out the study, said: ‘It’s now widely accepted that mortality improvements in the general population since 2011 have been much lower than in the earlier part of this century.

‘The causes of the slowdown, and whether these current low improvements will persist, remain a subject of considerable debate.’ 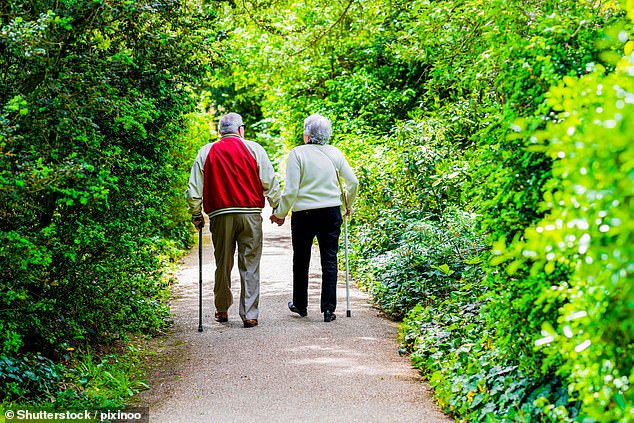 The institute declined to speculate on exactly why the forecasts showed lower life expectancy, but experts have pointed to the impact of austerity, cuts to the NHS, and rising rates of dementia, diabetes and obesity

The CMI said these figures are based on expectations for those that have a pension scheme.

The life expectancy for the general population is actually lower, with men living a further 19.8 years and women 22.4 years, a drop of five months from 2017.

Tom Selby, senior analyst at AJ Bell, said: ‘There is an increasing body of evidence pointing to a slowdown in life expectancy improvements.

‘If this were to continue over a longer period of time it could have profound implications both for individuals and society as a whole.

It could also fundamentally affect projections around Government spending in a number of areas, particularly in relation to the state pension and social care.

‘If life expectancy improvements stall or even go into decline, questions about whether future increases in the state pension age should be implemented will inevitably grow louder.

‘In the shorter-term, falls in expected life expectancy are good news for savers buying an annuity as the rates on offer should increase.

‘If these schemes are able to factor in lower life expectancies than at the last valuation, you would expect liabilities and deficits to fall.

‘This could in turn provide a cashflow boost to the business if contributions aimed at reducing deficits can be reduced.’

Pension firms have already began to cash in on falling life expectancies.

If they change, they can release some of the reserves they hold that they need to pay clients.

This week Legal and General said it was releasing £433million.

City analysts RBC Markets told the Guardian that there could be even more gains.

It said: ‘If you thought reserve releases to date were large, just wait. Today’s model will result in major reserve releases, as insurers will pay annuities for a shorter period than they previously reserved for.’

A number of theories have been cited for the slight drop in life expectancies.

In 2017, Sir Michael Marmot, director of UCL’s Institute said its ‘entirely possible” austerity has had an impact.

According to the Guardian, in July 2017, Public Health England reviewed possible causes, including population changes and influenza, but did not find enough evidence to prove a link.